A rollicking Metroidvania where you control a tablet who moves around like robot Spider-Man.

The setup for Kunai is evocative of the whole experience. Delightfully unassuming, the story follows a happy little tablet named Tabby thrust into a robot war. Tabby is often overlooked, just as Kunai, from developer TurtleBlaze, might be because of its relative simplicity as a 2D platformer. But for the sake of the video game, big things come in small packages. Kunai is one of the best Metroidvania experiences I've encountered in a long time and it absolutely shines on Nintendo Switch.

Tabby controls like a dream, with a variety of abilities and a focus on its playful movement. Most attacks are what you'd expect; the base weapon is a katana, and guns of different types are added as you progress. What separates this from the pack is the title items: the pair of kunai you find early on. The kunai essentially turn Tabby into iPad Spider-Man, as you can effortlessly bounce around the world with simple presses of the shoulder buttons. The physics of it all take some getting used to, but once you figure it out, exploration becomes more interesting and varied as you can zip around almost effortlessly. The kunai are also used in combat, primarily to maneuver around enemies. A good chunk of the bosses you encounter aren't so much tests of combat strength as they are tests of your kunai maneuverability. It wisely focuses on the best aspects of the game. That isn’t to say the combat is bad. The sword has a nimble feel to it and the variety of guns⁠—ranging from electric-stunning shuriken to world-ending rocket launcher⁠— add fun and functional accents to fighting. Those guns are also used as puzzle-solving tools, with a handful of novel, creative twists. 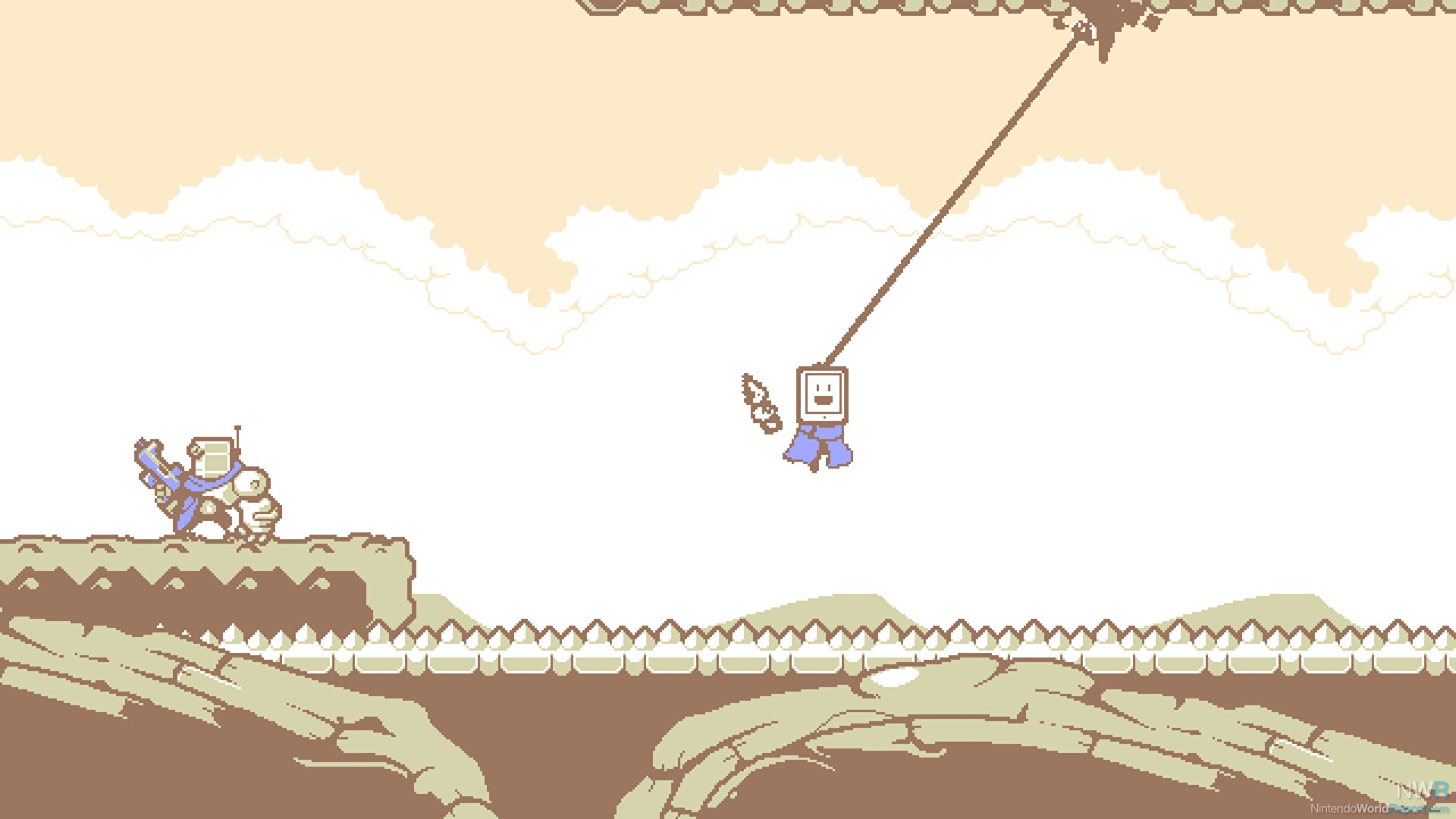 The world is pleasantly interconnected and contains oodles of secrets, as is the case with the Metroidvania genre. The one area Kunai falls short on is the lack of meaningful collectibles. All of the core items are based around story progression and the secrets are primarily health boosts, in-game currency, and hats. Now don't get me wrong: that little tablet looks great with a plunger on its head, but aside from the joy of discovery, there isn't really any gameplay boon.

Luckily, each and every area you encounter is visually stunning, courtesy of the stark, minimalist presentation. Distinctive colors make different levels stand out, brought out more by the snazzy animation and Metroid-esque mood-setting soundtrack. This is a world that is enjoyable just to live in. The narrative also does the right thing for this style of gameplay in that it gives you some context and mostly just lets you run wild. Tabby does run into some NPCs along the way, adding lore to the world with some light yet strong writing. 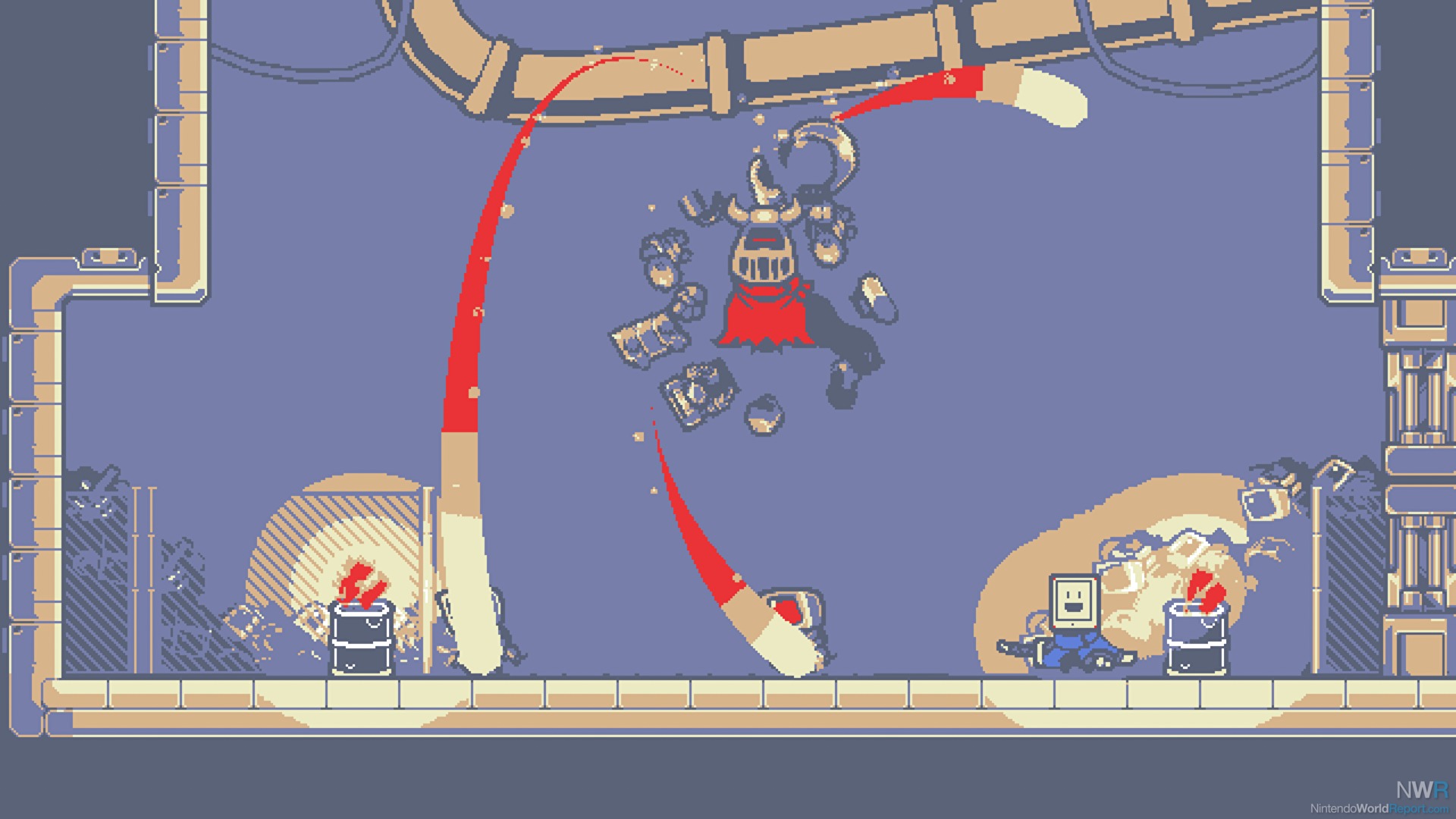 Upon game completion, which seems to hover around 6-10 hours, Kunai's primary replay value is in going for 100% completion. A hidden time trial area also lingers, but I am terrible at speedrunning so all I can really do is tell you it's there. I did, however, feel incredibly satisfied reaching the end of the main game. The final act features a lot of variety that focuses on the best elements of the gameplay, namely focusing on movement and exploration, while tying that into boss battles and some fairly challenging segments.

Overall, Kunai just has a level of polish that is sometimes hard to come by in indie games. Everything clicks and works; nothing is obtuse. It's evident that the developers playtested the heck out of this game just by how well it all flows. Movement is crisp and load times are minimal. It's a blast.

Kunai is the next great Metroidvania on Switch. It could easily stand toe-to-toe with the likes of Ori and the Blind Forest and The Messenger, especially in how effortless moving around and traversing the world is. This is as close to a must-play as I can recommend. You're a tablet who plays like Spider-Man, and everything looks beautiful. Kunai is excellent.