I tried writing a proper, formal review of Eternum EX but it was incredibly dry so I’m going back to this format (examples here and here).

Hello! I’m back to ask you about new video games.

Fantastic—this will give me a chance to take a break reading Julian Jaynes’ The Origin of Consciousness in the Breakdown of the Bicameral Mind. Not that you’d know anything about that.

No, of course not.

But to your point, I have, in fact, been playing a new Switch game called Eternum EX. It’s a platformer that seeks to evoke the arcade games you’d find in the back corner of your local Pizza Hut or Round Table (Editor’s Note: Is Round Table some sort of Alaska thing? Did y’all not have Ground Rounds?) when arcade machines were still popular.

Ah, those halcyon days of yore. I ‘member those days. Tell me more about this nostalgia-inspiring Switch game. You control an aging wizard, Sir Arthur, and your goal is to collect all of the treasure chests in a room without being killed by monsters or environmental hazards. Once you succeed in this task, you move Arthur to an exit portal and go on to the next stage, which has a different layout. Every fifth stage is a “boss stage” in which Arthur must climb a vertical tower and then fight a boss.

That sounds pretty nifty. It must be a great two-player competitive game.

You’d think so, seeing as Eternum EX is all about duplicating old arcade gameplay (by the way, Nintendo clearly doesn't edit these game profiles) but this is a solo adventure, which is kind of disappointing because without a second player to compete with, the game becomes very repetitive very quickly.

Are there any wrinkles to treasure-hunting that might spice things up? 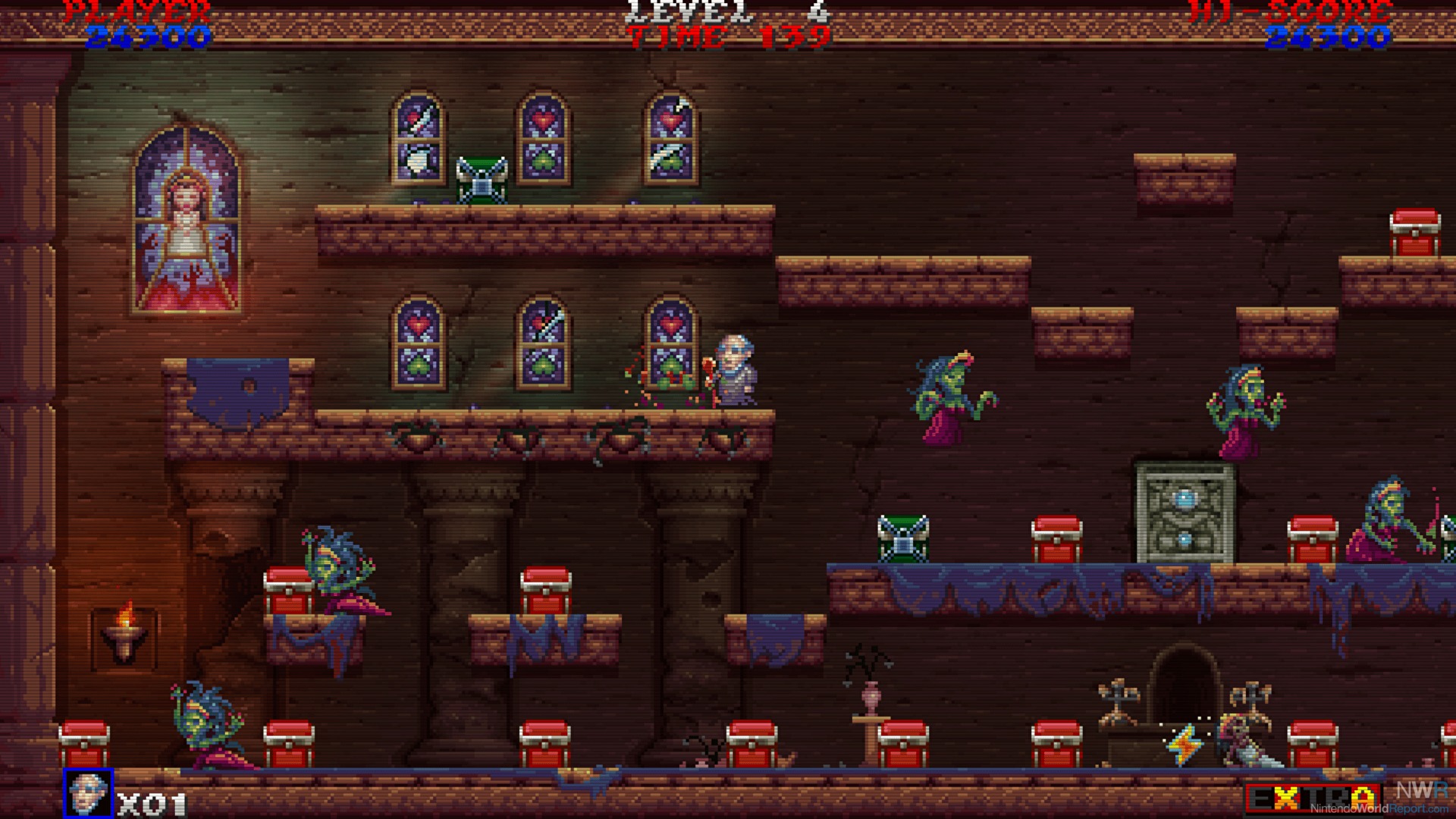 There are, yes. Enemies change from stage to stage. Various power-ups appear that give you bonus points, a timed fireball spell, a sort of fireball grenade, more time, etc. If you collect all the EXTRA letters, you get a 1-up, not that 1-ups aren’t fairly routine items on their own. Plus, the treasure hunting has an interesting risk/reward twist: if you’re able, you can bump a treasure chest from below (a la Vs. Mario Bros.) one or two times to increase its point value. Green chests must be opened this way, but with normal red chests, it’s totally optional.

What’s the “risk” part of that?

Sir Arthur is on a fairly strict time limit in each stage, so doing a lot of bumping tends to run the clock.

That sounds kind of cool. What are the enemies like?

Sorry, I must have misheard that last one.

You did not—the weirdest enemy in the game is a floating eggplant monster with a toothy maw. Enemies tend to wander the stages at random—your primary concern is that there are always a lot of them. Thankfully, Sir Arthur wields a mean, uh, stick, so he can deliver a fatal melee attack to enemies that are right in front of him. Goblins burrow out of the ground and have a tendency to do so either directly under Sir Arthur or where he’s about to land from a jump, which tends to feel cheap, but this IS supposed to be a lost arcade game from the early ‘90s.

Tell me about the tower climb stages.

You don’t have to collect any treasure, which is cool, but there are still power-ups to grab. Tower climbs are basically vertical obstacle courses. You’ll be avoiding a lot of fireballs. If you take your time and are mindful of your surroundings, you’ll get through them fine. And then there’s the boss.

How are the bosses?

They’re surprisingly engaging, though once you hit the third boss Arthur’s inability to attack at a distance and single hit point start to become a concern.

Wait, you can’t take any hits?

No, and once you lose all your lives, it’s curtains. You can continue (more on this in a second) but you’ll have to reclimb the tower and retry the boss. It would be nice if one of the various power-ups that Sir Arthur finds gave him temporary armor or something. Just let the guy absorb a hit.

That sounds less fun but, again, old arcade game from the early ‘90s.

Right. It’s just that there’s a reason those games went extinct. When you start a new game, you can choose “Home” or “Arcade” modes. The former saves your progress between stages but only gives you three continues while the latter does not save your progress but provides unlimited continues. This is an interesting duality that I appreciate—it’s the kind of thing you’d see in the home console port of an arcade game from that era. Oh, and there are leaderboards that function as a modern “High Score” screen, so that’s something, although they're only viewable after you have a Game Over.

I like the graphics—they’re 16-bit sprites, and Arthur controls well. The music is fine but forgettable.

Should I go out and play it?

I don’t know, man. It’s one of those games where there isn’t much technically wrong with it, but it feels like a relic today that kind of wears out its welcome pretty quickly. When was the last time you played Bubble Bobble or Snow Bros. by yourself?

I mean Bubble Bobble was on the NES Classic, so pretty recently.

How long did it hold your attention?

Exactly. Bubble Bobble is a great game when you’re playing with another player. By yourself, it gets old pretty quickly. That’s the feeling I get with Eternum EX. Some people might love it to death and might go for the top of the leaderboards, but on the whole, I’m pretty “meh” about the whole thing.

It is, because I feel like there’s a good game here. It replicates the spirit of that Pizza Hut arcade bank almost to a T. It would be like I played VVVVVV and understood what it was going for and recognize that it was successful in that goal but it just didn’t grab me. Well, VVVVVV grabbed me. Eternum EX didn’t.

Wrap it up, I have other people to haunt.

If you really long for those days of playing Street Fighter II and Metal Slug while you wait for your Book It group’s pizza to come out, you might want to give Eternum EX a look. I feel like it needs a two-player mode to keep things fresh because otherwise it runs out of steam pretty quickly.