This game's reach is longer than my patience for it.

The Long Reach is a 2D sidescrolling adventure-type game where your character wanders around gathering things and then using those things to get other things and then, slowly but surely, progress. This game also has the distinction of being a horror game (hey didn’t I just play one of these?), but the tension evaporates somewhat due to the obtuse puzzles and easily missed items that are critical to your path forward. This is one of those games that’s good in theory but not great in practice.

Some terrible event, seemingly caused by science run amok, is causing people to hallucinate, go crazy and slaughter their friends and colleagues. Your job, as a junior researcher in a secret laboratory, is to survive, escape, and maybe find help. You do this by wandering through impractically dark hallways, straining your eyes to see if certain items are highlighted with a yellow outline, which means they can be interacted with. Sometimes, your character will just say something snarky about it, other times he’ll pick it up and add it to his inventory. Then, it’s off to another dark hallway to “click” on every interactive object and hope something happens—an unfortunate staple of the genre. 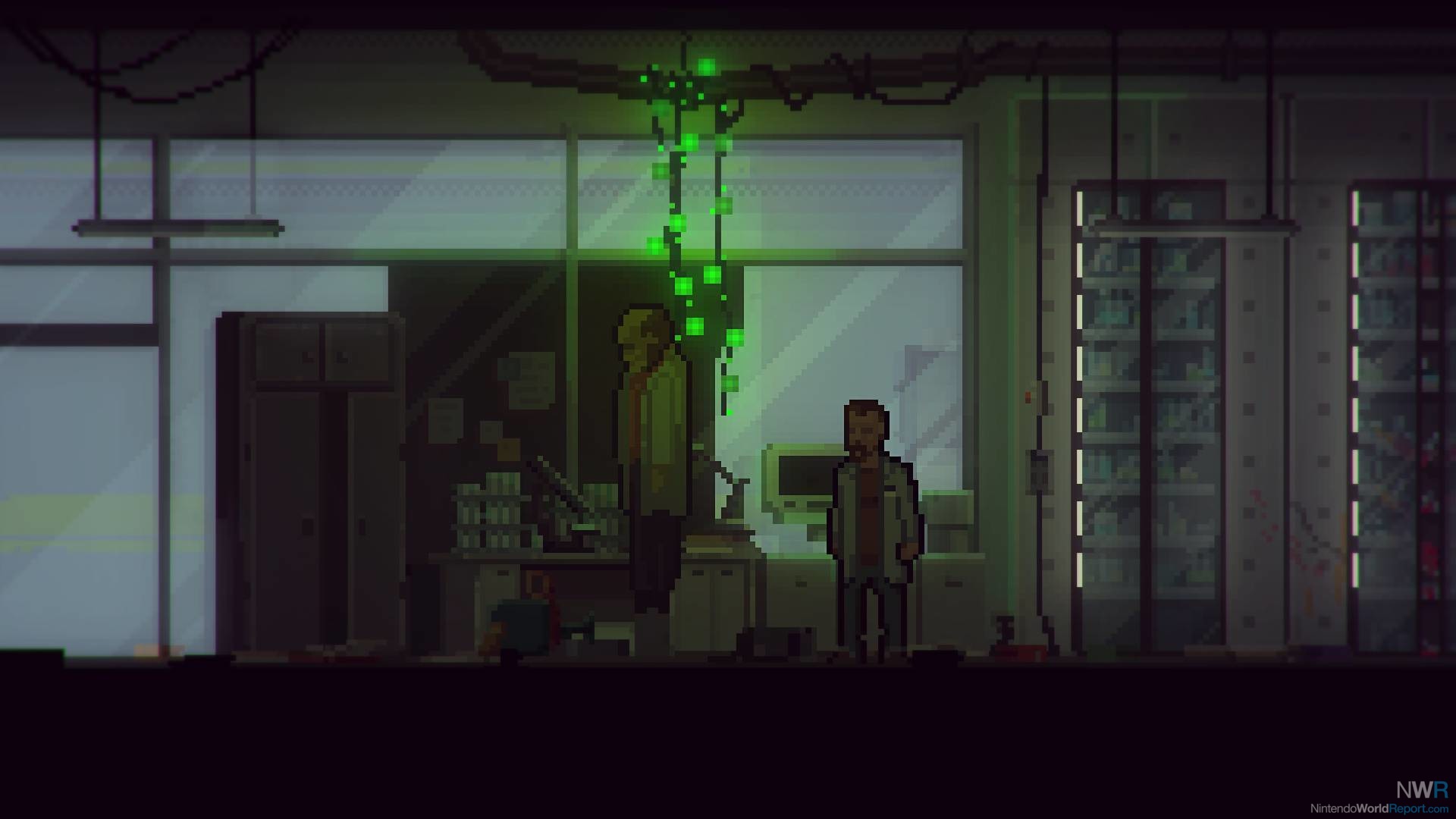 The game is too dark. Not just the color palette, but in terms of lighting, The Long Reach struggles with even basic visibility. It’s particularly vexing when you go into a room in which the lights are off, find the light switch to turn them on and the result is barely any better. The darkness constantly obscures items you need to interact with (the entire object should turn yellow, not just its outline), and in at least two instances, I simply could not see an object I needed to use in order to solve a puzzle. I more or less accidentally activated the objects by pressing “A” repeatedly while moving forward because there was nothing else I could do. Even with the game’s “gamma” setting pushed to its limit, the encroaching darkness was just too much. This problem is magnified if you’re playing The Long Reach in tabletop or handheld mode.

Aside from the darkness, I like the game’s pixel-based aesthetic; this is what an SNES point-and-click adventure game would probably look like. The nature of the game’s plot brings with it some spooky visual effects that reminded me of my beloved Eternal Darkness, and I wish there’d been more of that. The sound design is also effective, but the music doesn’t loop. The track ends and immediately restarts, but there’s a mismatch between the end and the beginning, which I found distracting. The game’s dialogue is filled with grammatical, spelling and word-choice errors, which made the English major in me wince. Despite all this, the game’s storyline is bizarre (and Lovecraftian) in all the right ways and I found myself pushing through frustration in order to find out what happens next.

Two more things that I should mention: First, you randomly lose control of your character. That is, button inputs stop working for several seconds. This is a bug, and it’s not a game-breaking bug, but don’t be surprised if it happens to you. Second, the load times are severe to the point where you start to wonder if maybe the game hard-locked on the loading screen.

All told, The Long Reach could have used some more time in the oven. It presents issues that seem readily solvable—lighting, object highlighting, proof reading—but in its current form, the game is frustrating and not particularly enjoyable. Maybe some of the problems can be patched out, but until that happens, I can’t recommend The Long Reach despite its intriguing storyline.