Two shinobi are better than one.

Ever since the original Senran Kagura: Burst, a game I’m still amazed was released in the West at all, I’ve been a fan of the Senran Kagura series. It’s not just because of the satisfying brawler combat or the boob-tastic gameplay gimmicks. Oddly enough, it’s the charming localization and surprisingly emotional, earnest storytelling that makes Burst engaging and memorable. I also picked up the Vita games Shinovi Versus, which expands the original’s character roster, and Bon Appetite, which is a challenging rhythm game. After the repetitious grind that was Shinovi Versus, I was worried about the newly released 3DS sequel Senran Kagura 2: Deep Crimson, but I’m happy to say that the two are quite different, and the latter is a far better game.

Deep Crimson takes place between Burst and Shinovi Versus, and features a couple new antagonists. The first half of the game concerns the fate of the Hebijo Academy girls after the end of Burst, while the second half deals with the invasion of Japanese demons and the moral quandaries in being a “good” or “bad” shinobi. 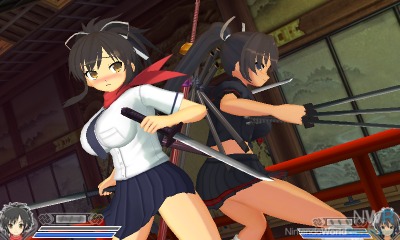 Overall, the gameplay is more similar to Shinovi Versus than Burst, in that you’re usually tasked with battling boss-type characters after a brief scuffle with minor enemies. Thankfully, you’re not limited to battling rival schoolmates forever: Deep Crimson features a wealth of interesting monsters both big and small that will test your mettle. The girls still level up, gain attack combos, and pull off powerful Secret Arts attacks. For the most part, they all control a little differently than in either Burst or Shinovi Versus. Yomi, for example, is now equipped with wrist-mounted cannons. Mirai can freely swap between a combat umbrella, machine gun, and grenade launcher. Haruka doesn’t battle directly, but instead controls a boxing droid.

The big change this time is the ability to control two girls during any mission. You swap between them with the A button, and the second character is otherwise controlled by the AI. You can unleash a different team-based Secret Art with every character combination, and it is fun to try them all. 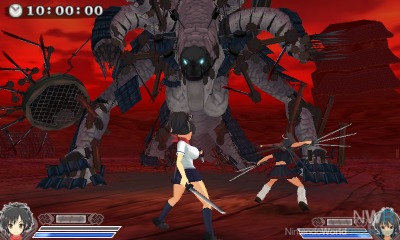 The game offers different mission types, as well. There’s the usual Story Mode, but also special missions that you must complete with certain parameters (only use ground attacks, take no damage, etc.). Completing special missions unlocks Shinobi Stones, which can be equipped to buff your characters. There’s also the Yoma’s Nest—a series of increasingly difficult kill rooms where you can earn lots of experience and new character-specific weapons, but if you fall in battle (as opposed to exiting early) you’ll lose most of your rewards. As in Burst and Shinovi Versus, it pays to spend some time grinding through earlier story missions with each character to get everyone to the same level.

Deep Crimson also offers local and online multiplayer. I did not get a chance to try either one, as nobody was playing online whenever I tried. However, as in Shinovi Versus, I feel like it’s probably a nice thing to have, but definitely not a core part of the experience.

The game looks much better than Burst. Animations are smoother, character models are cleaner, and the series’ famous clothes-tearing is more dynamic. The boob physics are intact, but the boobs look better. They squish together now, which is an improvement from even Shinovi Versus. When not battling, you can customize the girls’ outfits, accessories, and even pose them for a semi-creepy photo mode. My biggest problem with the game’s presentation is that while battles take place on large, unbroken maps, the camera only focuses on your character, so you’re always losing track of your opponent(s) when they move off-screen. 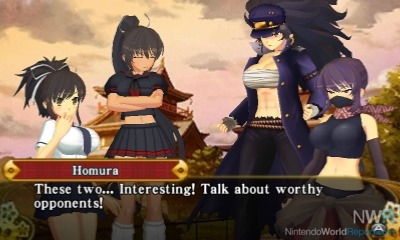 You’d think that the new targeting mechanic would make up for this, but it doesn’t at all. This isn’t Z-targeting by any stretch—it really just targets one enemy for Aerial Rave attacks (which are still present, but far less prominent). The combat is definitely closer to Shinovi Versus than Burst—that has good and bad consequences: it’s messier, and with no block button, you’ll be constantly using dive attacks to break up enemy pile-ons. Secret Art moves are always great but since the targeting doesn’t actually mean anything, you’ll often miss your mark, which is frustrating. Thankfully, the girls all learn new attacks and combos as they gain experience, so there’s always something new to try.

Camera and targeting issues aside, Senran Kagura 2: Deep Crimson is a very fun game, especially for fans of the franchise. Both in terms of story and gameplay, it finds a middle ground between Burst and Shinovi Versus. I’m enjoying it and if you’re okay with the subject matter, you might, too.

Nice review. Game looks to be an all-around improvement over Burst.

Glad it's not all about the boobs with this franchise, Zach.

Anyway, I wasn't very interested in the original, as I'm not a fan of the side-scrolling beat em up. But this one looks really fun and interesting. Might pick it up. 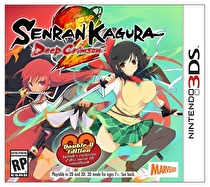