In the transition to Wii U, Epic Mickey 2 doesn't improve.

The first Epic Mickey game couldn't quite deliver the sublime Disney history romp Warren Spector's team at Junction Point was promising. With the jump to a more powerful console, a lot of those issues should have been solvable. Unfortunately, Epic Mickey 2 suffers from many of the problems that plagued its predecessor.

Epic Mickey 2 sees Mickey returning to Wasteland, now ravaged by earthquakes, to team up with Oswald the Lucky Rabbit. Some curious events lead Mickey and Oswald on a search for the real source of the earthquakes, which takes them through twisted versions of old Disney parks’ attractions. The quest itself is fairly straightforward; you go through a few different areas, solving some basic puzzles and defeating enemies, though there are two ways to do almost everything. The paint route is the game's good path, and is probably a little more difficult since it usually requires you be more careful about how much damage you do to the environment, while the thinner route provides an easy way out, letting you simply destroy anything you want. 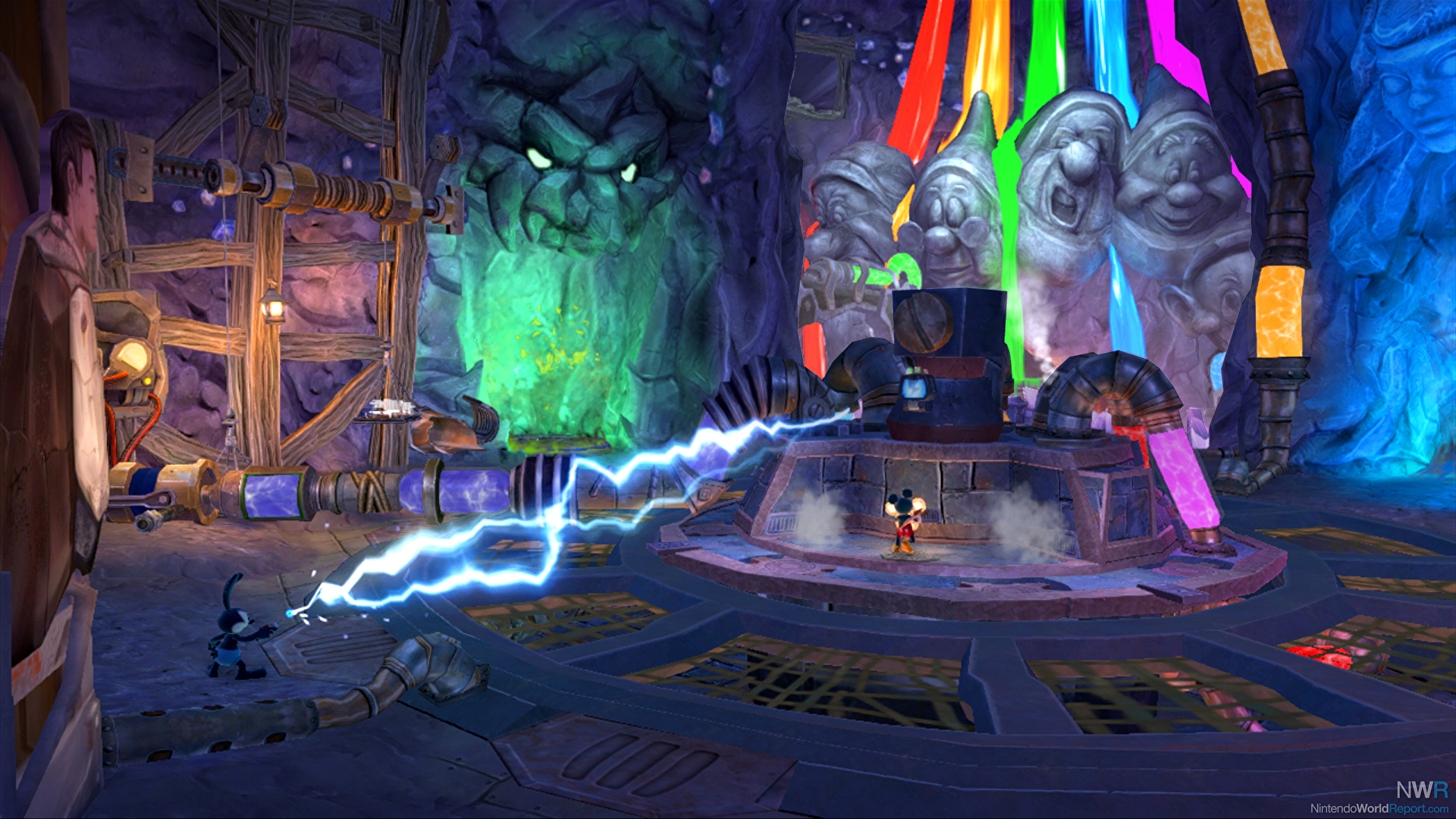 While the platforming itself may be standard fare, the environments are not. The production design on Epic Mickey 2 is fantastic. Junction Point seems to have sourced every item in the game from the Disney archives, and twisted them all into Wasteland's unique environments. Walking through areas inspired by extinct attractions is interesting, and Disney nerds will find a lot to love. The new musical cut scenes are also a fun addition, especially considering that the Mad Doctor is the last character you would expect to burst into song. The sequences' slightly off-kilter nature fits the game very well, and the cut scenes have a beautiful Mary Blair-inspired art design.

Sadly, this trip into the annals of Disney history is hampered by technical issues. The Wii U struggles to keep up with the game even with a moderate amount of things on the screen. Frame rate drops are common and make a few sequences in the game downright nightmarish. Those taking the game's "good" path are actually punished for their choice, since painting more objects into the game only exacerbates the frame rate issues.

The game is a co-op experience, so if you're playing alone you have to rely on an AI ally. It's a dodgy proposition from the get-go, and can create some headaches. The AI is fine most of the time. It's good at general platforming and is fairly responsive to the few prompts you can give it. However, things can get dicier with more on-screen business, which is only further compounded by the game's frame rate issues. 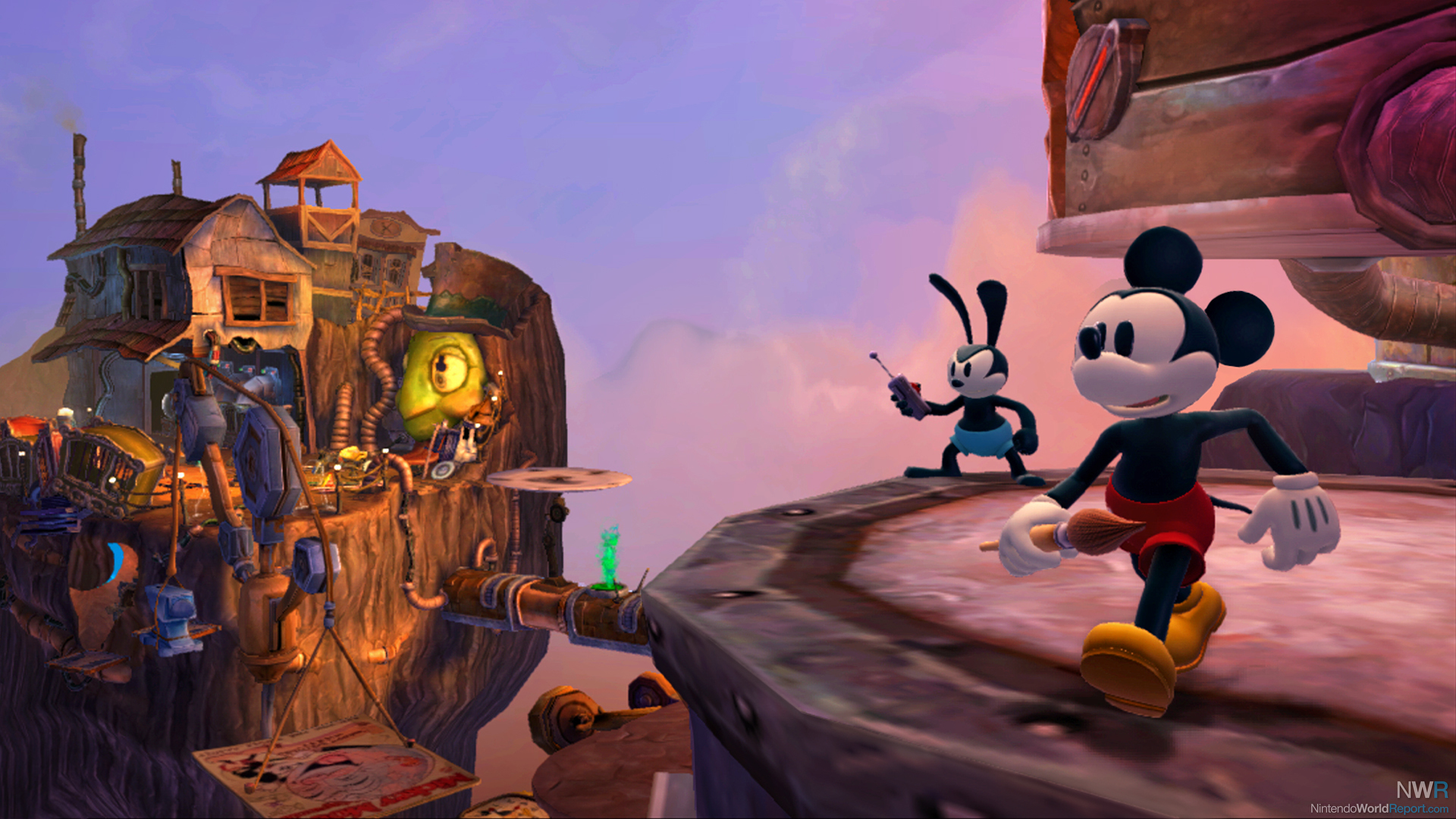 Despite the fact that the system supports the Wii Remote and Nunchuk, these controls are not an option for Mickey this time around. Players are forced to use the GamePad, which, while serviceable, is clearly a downgrade from the original game's pointer controls. There's no reason for this, as the GamePad screen is not used in gameplay and functions only as a map. It would have been just as easy to set the GamePad up on its little stand while using the classic controls. Unfortunately, the developers decided against this, so players are stuck with a sometimes-frustrating set of controls. They work fine for just about everything except for aiming your paint. Using the right stick for this is nowhere near as precise as using the pointer was in the first game. Additionally, the game does not support off-screen play, even though its GamePad screen functions aren't even needed to play the game.

Taken as a whole, it's hard to recommend Epic Mickey 2 to anyone other than big Disney fans. If the source material is of no interest to you, there's really no reason to play the game. The Mouseketeers out there may still take interest in the game, if only to see the fabulous production values. However, I'd suggest reading reviews for some of the other versions of the game to see if the frame rate issues are as bad. The Wii U version should be your last resort. I can't help but think it must have been rushed to meet the release date, when it would have benefited from some extra time in development.