Epic Mickey 2 has been revealed for the Wii U, and Mike got some hands on time with it.

At an event held in Disneyland earlier this week, a group of journalists and bloggers from the Disney and video game communities were given a sneak peek at a new section in Epic Mickey 2: The Power of Two. Rainbow Caverns is a new area in Epic Mickey 2 inspired by an extinct Disneyland attraction, Mine Train Through Nature's Wonderland. In it, Mickey and Oswald must navigate through a cave to a giant rainbow waterfall made up to look like a Mount Rushmore of Snow White's dwarves, pouring colored streams downward. The duo are tasked with fixing the waterfall's piping system, thus restoring the area and gaining access to the projector screen at the end of the level. 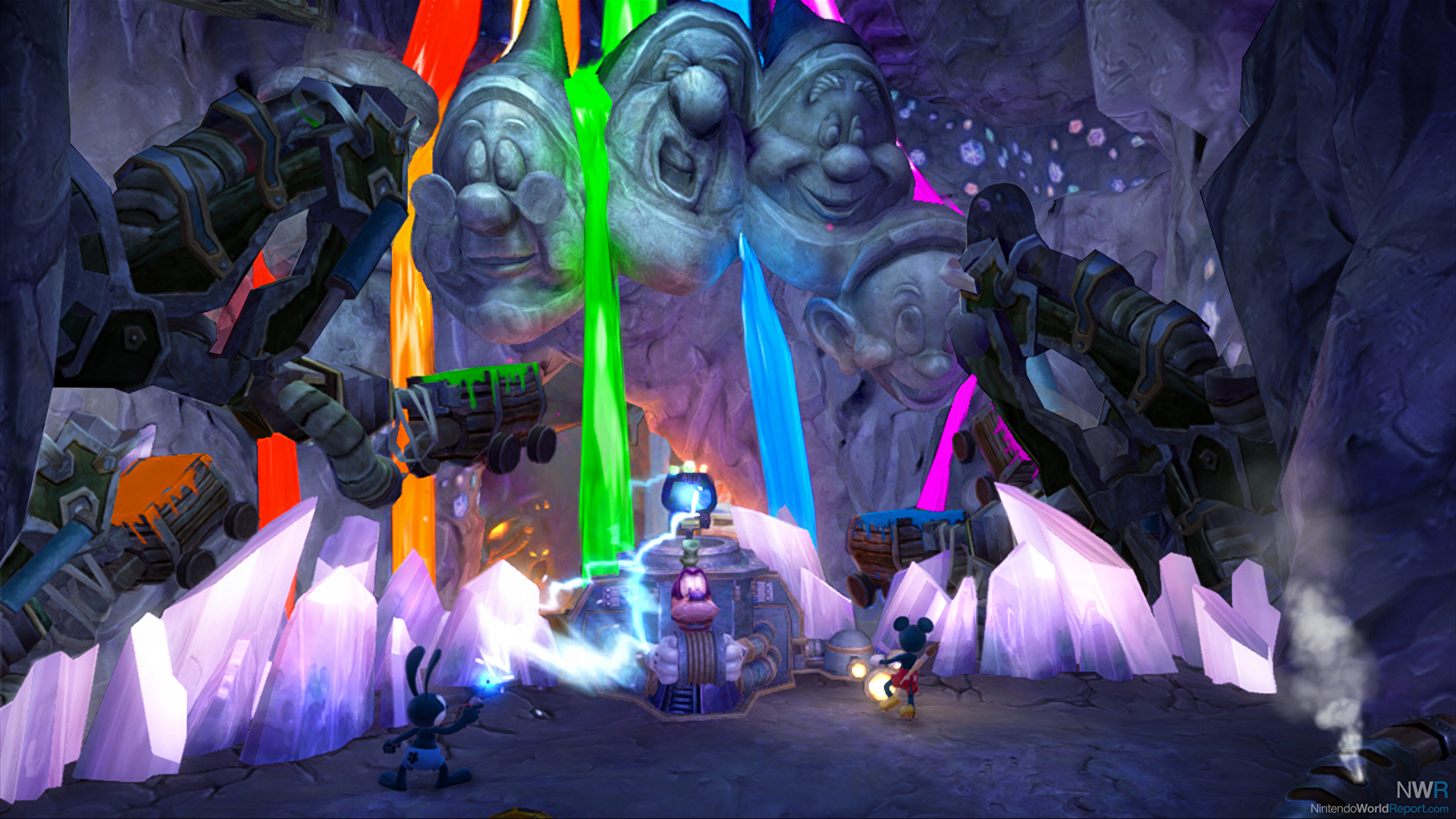 This area showed off one of the new features of Epic Mickey 2: ink wells. These wells, found across wasteland, hold one of two types of ink. By jumping into a well of invisible ink, Mickey and Oswald can make themselves disappear. They'll stay that way as long as they sneak around in a very cartoonish manner and avoid running into anything. In the cavern, this ink was used to sneak past the ever-watching eye of a security system and through a locked door. Later in the level, a well of indelible ink can be used to cover the characters in a hard golden coat, thus allowing them to traverse terrain that would otherwise stop them dead in their tracks. It also prevents a few hits worth of damage from enemies.

For those that have played the first game, it will feel very familiar, but much improved on. The core mechanics of platforming and paint/thinner gameplay are just as present as they were in the first game. The addition of Oswald as a playable character adds some new wrinkles to the puzzle solving. The Lucky Rabbit employs a remote control that can stun enemies, and activate all sorts of contraptions across Wasteland. It also allows Oswald to zap Mickey back to life if he is close enough. Mickey can similarly paint Oswald back into existence if he expires. This mechanic only works if the two are fairly close, encouraging players to stick together through the adventure. Oswald can also spin his ears to helicopter Mickey across large gaps a la Tales in Sonic the Hedgehog. 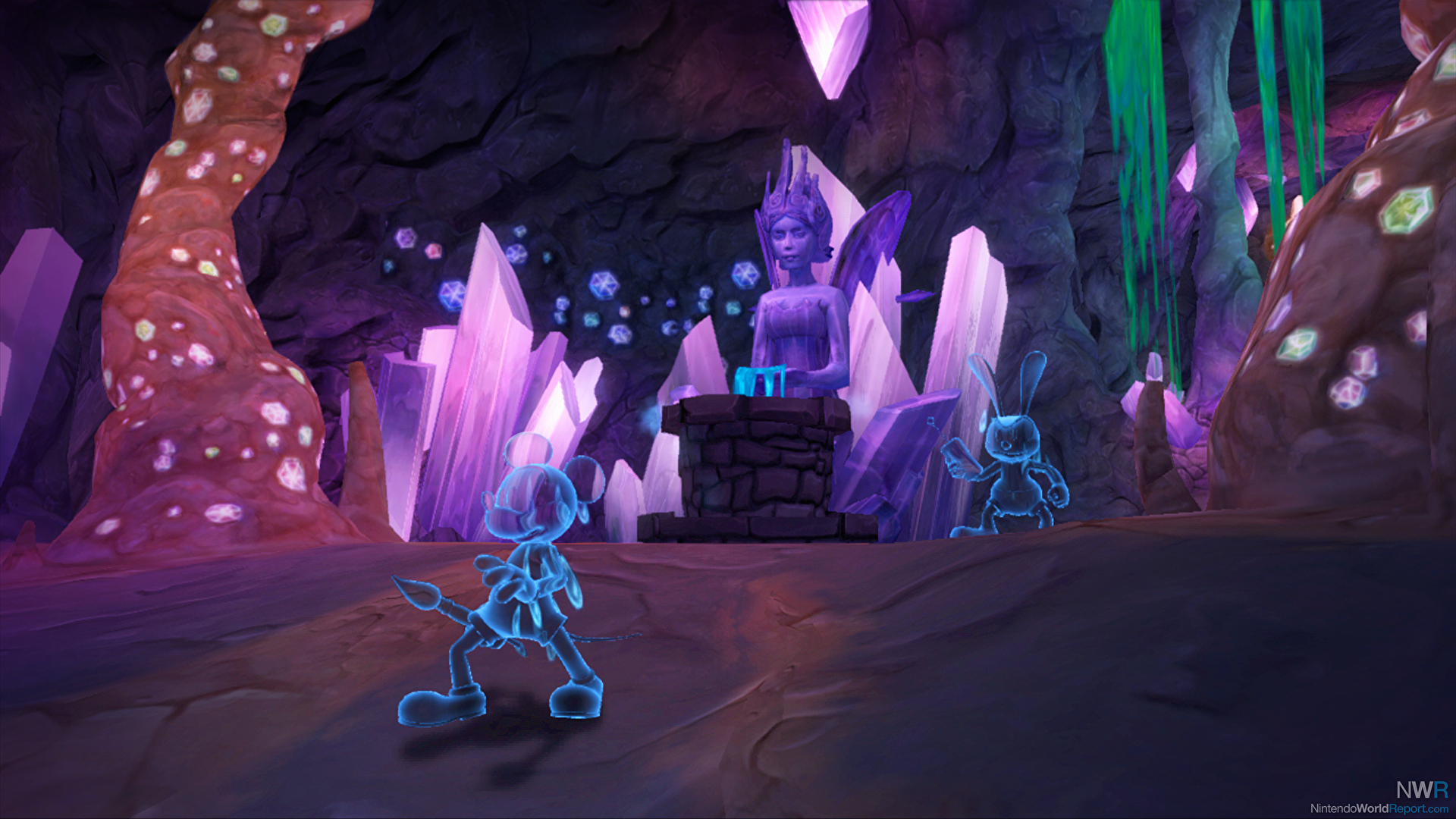 The game also adds a photo mode, which lets the player snap photos anywhere they'd like to across Wasteland. Special photo-op signs (much like those found all over Disneyland) allow players to snap shots of special areas for their collection. Photos can be shared with your friends as well.

Another new feature of the game, which wasn't displayed in the demo I played, is costumes. The heroes can collect and wear different costumes throughout the game. In addition to changing up the character's look, the costumes grant unique powers. It's very similar to The Magical Quest Starring Mickey Mouse on the Super Nintendo. We saw a picture of Mickey in a Peter Pan getup similar to the one in that game, which I hope means there will be some sweet grappling hook action to be found in Epic Mickey 2.

This event also served as the coming out party for the Wii U version of Epic Mickey 2. Warren Spector was really excited about getting his hands on the hardware, and the team has done a good job of bringing the game over to the system. The build we played was recently submitted to Nintendo for pre-certification, and is scheduled to release on November 18 alongside the other versions of the game as well as the Wii U itself (it's also Mickey Mouse's birthday). This was my first time using the Wii U GamePad, and while it was a little different than I had expected, it was still very easy to play. The screen is used as a map and also for selecting sketches, which allow Mickey to use special limited-use attacks and environmental effects, such as dropping an anvil on an enemy or conjuring a giant stop watch that temporarily slows down time. A second player can control Oswald with a standard Wii Remote and Nunchuk. 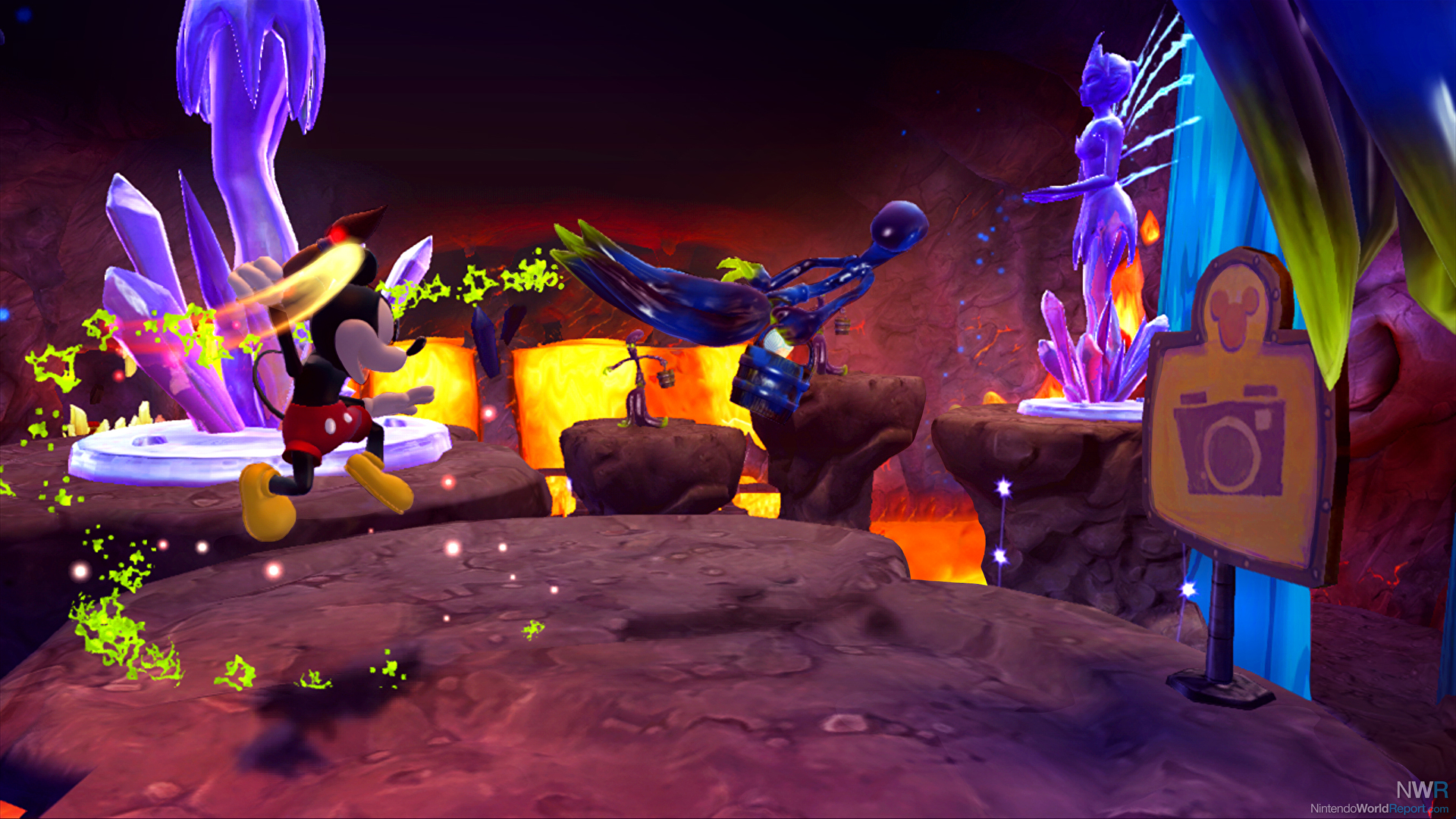 The graphics looked on par with the PlayStation 3 and Xbox 360 versions shown at the event, though there was some slowdown in one area showing that the game is not quite as polished at this point in development. As long as those little bits are cleaned up, the Wii U version looks to be the best version of the game to own, though it does not feature motion control for Mickey.

As a fan of the original Epic Mickey, I was also glad to see that the camera has been reworked and is much improved from the original game. While in the first game, I felt like I was constantly fighting for the right angle, in the sequel the camera is much more well behaved. It is more maneuverable, stays in place when you want it to, and does a good job of following the action.

Similarly, the AI that controls Oswald when in single-player mode is good enough that it doesn't hold the single-player mode back, which is about the best you can expect from an AI companion. Unfortunately, the co-op mode wasn't a part of the demo for the Wii U version I played, but it looked quite fun from what I saw of the other consoles' versions of the game.

Another nice addition to the game is fully spoken dialogue. Every line of speech in the game is preformed and all the characters sound just as great as you'd expect Disney characters to sound. The game even goes one step further, by featuring full-on musical scenes with characters breaking out into verse just as they would in a Disney animated film. I'm looking forward to the game's release. Every area of the original has been improved on, so fans of the original game should enjoy it heartily.

Disclosure: DIsney provided transportation to and accommodation at the Disneyland Resort in California.

You say no motion controls for Mickey?  do you mean with the gamepad or are you saying that the Wii remote & Nunchuck is not an option for single player?    if so, I may get the Wii version instead.

From what I understand, the Wii Remote and Nunchuk are not supported for Mickey, only the GamePad is and it does not use motion controls. We've reached out to the developers to get a hard confirmation on this.

A better camera sounds like a real boon to the game. The first game's camera was terrible, awful, and just plain stunk.

I passed on the first game, but the better camera, refined graphics, and musical numbers (!) in the sequel is grabbing my attention. Are there 2D platforming sections here as there were in the first game, based on classic cartoons? That was the only thing about the original that piqued my interest. Hopefully they make a return.

The 2D platforming segments are back. Some of them are also no co-op stages where Mickey is on one route and Oswald is on the other. You can work together to access special parts of them.