Growing up in the ‘90s, I used to love—nay, WORSHIP the Mighty Morphing Power Rangers. They were just too cool in my young eyes. As an adult, I realized all of that was beyond cheesy and stupid, but I still enjoyed them for the high camp value and even some solid stories every now and then. With the Power Rangers now in their Samurai series (in North America), we have Namco Bandai's own interpretation for the Wii. Unfortunately, what we have here is one of the most uninspired and boring Wii releases of the year.

Power Rangers Samurai follows the classic storyline of five teenagers with attitude who have each been assigned a different elemental power and trained under the samurai way of old. They get to face different monsters that threaten their city, and in the TV show it all culminates in a giant mech battle. On the show, it is all very cool, despite how cheesy it can get. In the game, it is easily one of the dullest things ever put on a Wii disc. The cutscenes are presented very poorly through still screenshots of the show and some cheaply animated character cutouts. Occasionally, they throw in some clips of the actual show, but they tend to repeat, often to the point where the novelty is lost.

Gameplay does nothing to improve on the game's mediocre stance. Power Rangers Samurai is a two-player beat 'em up akin to the Power Ranger games released on the Super NES in the mid-90s just as the original show was gaining its popularity. You select one of the five Rangers (each with a different elemental power assigned to their color) and embark on a mission that develops through different stages. Players can harness special powers that can be unleashed onto the enemies as well as find hidden goodies like clips. That all sounds fine and dandy, but the game's biggest problem is how it constantly reuses the same settings and the same enemies. By the time you replay the same downtown level and beat on your 100th goon, you might wish for the game to be over.

Power Rangers Samurai does try to bring some creativity into the mix in the form of interactive morphing sequences. Players swing the Wii Remote in different directions in order to complete the symbol that turns the characters into Power Rangers. The first time, it was a really neat way to pay tribute to the series, but much like with the other assets of the game, once you do it for a second or third time, the novelty wears off.

It wouldn't be Power Rangers without a Zord battle, which always culminates an episode of the TV show. The Super NES games did feature Zord battles in the form of brief fighting matches. The good news is that Power Rangers Samurai does have many Zord/giant monster battles. The bad news is that rather than being a fully interactive sparring match of giants, it is a timing-based affair. When the scrolling controller icons land on the center of the screen, the player either swings the Wii Remote to attack or the Nunchuk to defend an enemy's attack. Considering that this is one of the most exciting aspects of the franchise as a whole, it is disappointing that this is how the game interprets them.

The feeling of blandness can unfortunately be experienced in the graphics and sound department. Like I explained at the start of the review, the story is told through blurry screenshots from the show and character cutouts. This does nothing to further bring the player into the Power Ranger universe. The character models for the Rangers themselves and the bosses look decent enough, but the environment are very uninspired in their aesthetic. The musical tracks are also very forgettable, and even with the original voice actors from the show aboard, Power Rangers Samurai will do nothing to make you excited in terms of sound design.

To conclude, Power Rangers Samurai is a very basic and frustratingly dull release that hardly tries to bring the exciting world of the series to video game form. Everything feels like it was taken from the book of basics in game design and will do nothing to convince you to spend more time with the multicolor heroes and their crazy enemies. 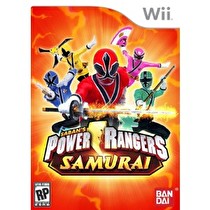