I'll be honest at the outset: I've never played a Ridge Racer game for more than five minutes before this game. I'm hazy on the history of the series outside of murmurs of the Nintendo 64 and DS versions, and the hilarity of the reveal of the PSP one. After spending time with Namco Bandai's latest entry in the series for Nintendo's new handheld, I feel as though I may have missed out on a cool series, as Ridge Racer 3D is a rather excellent mix of arcade and sim racing with tons of content and stellar stereoscopic 3D visuals.

The basic mechanics are easy to grasp. You drive a car, all of which appear to be based on real cars but skew towards ridiculousness with the assortment of Namco-related decals, through numerous races. The keys to racing are slip-streaming, drifting, and boosting. Slip-streaming is performed by riding behind a competitor, and then building up a meter that gives you a mild speed boost. Drifting, historically executed in the series by letting go of and then pressing back down on the accelerator while turning, can now be done with one button in this game in a similar fashion as Mario Kart. Some series veterans might hate this addition, and it functions kind of like how drifting is done in Mario Kart Wii. When you drift, you build up your nitrous meter, which can be used for boosts.

While every mode is centered on racing, there are a lot of them. Grand Prix is a lengthy mode where you follow branching paths, earning points and unlocking new cars and upgrades. Quick Tour allows you to set an amount of time you want to play for and let the game build you a custom set of races. Standard Race, One-Make Race, and Time Attack all offer different self-explanatory ways to drive one track at a time. There is also local multiplayer, but unfortunately, there isn't an online component, which is a gigantic oversight for this type of game. The StreetPass mode, which I was unable to try out, lets you exchange ghost data with other people who own the game. You can also race against included ghosts

The graphics when not in 3D aren't anything to write home about, but the framerate is rock solid, so the mediocre graphics are alright. However, when you turn on the 3D, things get real. The car pops off the screen, particle effects such as leaves and confetti litter the screen in wonderful ways, and boosting gives you a marvelous sense of speed. The 3D employed in Ridge Racer really brings you into the game, making everything look better. Out of all the launch games, Ridge Racer is one of most impressive in 3D.

The soundtrack fits the game well with a variety of songs. Sadly, the announcers are extremely grating, but you can luckily turn their volume down. The controls, thanks to the spectacular Circle Pad, are wonderful.

Ridge Racer 3D isn't all sunshine and lollipops, though, as the lack of online multiplayer is a real drag, and the track variety seems to be a little bit of an issue. A lot of the locales feel the same, and you repeat tracks often. In a way, it's kind of like the first Rock Band's World Tour mode; the primary mode is long, but in due time, you repeat the same courses/songs over and over again. That's fine when the tracks are good, which most of them are, but when you repeat the same duds over and over again, it becomes a chore. Luckily, the branching path manner of the Grand Prix gives you an avenue to skip events.

If you're into racing games in the slightest, I highly recommend Ridge Racer 3D. In the years to come, it will no doubt be bested by another racing game, but for the time being, it is a great launch game that offers fun gameplay and an awesome use of 3D.

From what I've heard of some game reviewers, the Ridge Racer series is like Dynasty Warriors in that it has mostly stuck to its simple formula and has done little in its long history to evolve and innovate. My perspective is limited too in that the only Ridge Racer game I have played much of is Ridge Racers 2 (PSP). I really like Ridge Racers 2 especially in how you can do ridiculous 360 degree angle drifts while spinning away from the turn. It looks like Ridge Racer 3D is already treading on old grounds within itself which is a shame.

I think i'm going to buy this game because of this review. The first few lines of this review were FOR ME. I never played it and I enjoy arcade racers.

No online multiplayer? Nintendo should have required it.

No online multiplayer? Nintendo should have required it.

Not even Microsoft does that!

This is the game I'll be buying with my 3DS tomorrow.

Already have my copy and looking forward to playing it. Will be my first game I try out.

Anyone know how many unique tracks are in the game?

I am on the fence about this game and that number will make a big impact on which way I swing here!

I'll be honest at the outset: I've never played a Ridge Racer game for more than five minutes before this game. I'm hazy on the history of the series outside of murmurs of the Nintendo 64 and DS versions, and the hilarity of the reveal of the PSP one. After spending time with Namco Bandai's latest entry in the series for Nintendo's new handheld, I feel as though I may have missed out on a cool series, as Ridge Racer 3D is a rather excellent mix of arcade and sim racing with tons of content and stellar stereoscopic 3D visuals.

I am in the same exact boat, I just picked up a copy last week and I can't put it down. I am having so much fun with it. Good game to have at launch.  ;) 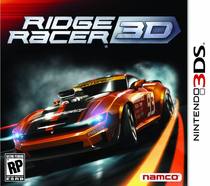