How to Train Your Dragon

Is this dragon worth training?

This past March, Dreamworks Pictures released "How to Train Your Dragon," a 3D, CG animated film based on the children's book of the same name. Like clockwork, Activision released a videogame based on the film. The film has been a worldwide success thanks to its great characters and heartwarming story. Does the videogame version replicate its success?

How to Train Your Dragon takes place in a world where Vikings and dragons co-exist. In the film they are enemies that later become allies thanks to the efforts of main character Hiccup. The video game version takes many liberties with its narrative, taking place sometime after the movie's ending while offering an original story. This should please fans that haven't seen the film and don't want the game to spoil it for them.

The game's main mode is Story Mode. The gameplay in this mode is divided into two parts: exploration and dragon fighting. During the exploration parts you get to play as either Hiccup or Astrid, and take care of your main dragon while exploring the dragon/Viking world, taking on missions, and helping their friends and other villagers out. The execution is akin to most 3D platformers, although the emphasis is more on dragon raising than on exploration. In some missions you can obtain more dragons that you can use later on in dragon fights.

The character's dragon lies in the dragon's den. In here, you will be able to take care of the dragon and alter its stats. Some of these include strength, rest, and trust. You can boost them by feeding it meat, vegetables, fish, and other minerals. The higher these stats are, the better your dragon will perform in the arena. It's a surprisingly clever system that should please fans of dragons and the movie. You can also train your dragon by partaking in training sessions where you can learn your techniques and attacks.

Other challenges include mini-games that earn you new minerals, items, and food for your dragon. Recipes can also be earned that can be used to feed your dragon special dishes. Finally, your dragon can be customized by changing its colors, wings, tails and horns.

It's such a shame that with this structure in place the actual dragon fighting is very simplistic. Once you complete a series of tasks, a new tournament opens. As you keep defeating characters you earn points, and these points give you the opportunity to challenge the other dragon fighters. Up to two dragons can be taken to battle (your opponent will do the same), but it is important to know how to handle your dragons, because if one is knocked out you will only have one for the rest of the tournament.

The simplistic execution lies in the fighting engine. Battles can easily be won by shaking the Wii Remote and smashing the A and B buttons for fire breath attacks. You can also block attacks by pressing the C button on the Nunchuk, but if you keep blocking your shield will break, leaving you open to an attack. Once more, these ideas are neat but are marred by a pedestrian execution. You can train your dragon to the point where your dragon will be overpowered, making the battles even easier. This is ideal for the game's target audience, but for everyone else they will be underwhelmed despite the vast number of dragon training features.

Other gameplay modes include Arcade, where you can have multiplayer dragon battles as well as play the mini-games encountered in the Story mode. There is also an Extras mode where you can unlock artwork, movie and game clips, and other Dragon- related goodies.

Visually, the game stays true to the design of the film for the most part. The characters - while looking a tad differently from their film counterparts - are very well-modeled. The dragons are also loyal to the designs seen in the film, so whether they are cute or menacing they are authentic and very enjoyable to see. The 3D overworld is particularly stunning. It looks a lot like the world seen in the film, and there are some incredible sights that make exploring enjoyable.

The sound department isn't as solid as the visuals, though. Some of the music borrows cues from the film's soundtrack, but it's ultimately forgettable. While the film features talent the likes of Gerard Butler, Jonah Hill, and many others, the game relies on sound-alikes for its characters, and at times the illusion is disheartening. Stoic the Vast, for instance, sounds nothing like his film counterpart. Even worse, the lines of dialogue are repetitive and at times obnoxious.

In the end, How to Train Your Dragon is a middling effort from Activision. The dragon-raising aspects are well done and offer some depth to an otherwise shallow experience; however, the dragon fighting is very repetitive and the graphical and sound qualities are uneven. Still, young fans of the movie should enjoy going back to the dragon/Viking world toplay with their favorite dragons.

The overworld replicates the world seen in the movie very well, giving us some surprisingly stunning visuals. The character and dragon models are a tad different from the film, but manage to look nice.

The soundtrack at times tries to replicate the original film soundtrack, but overall it's forgettable. The vocal performances fail at trying to sound like the talent found in the film.

Relying heavily on motion control, the controls neither add nor detract from the experience. They are easy to learn, though, so younger players should get the hang of them very quickly.

The combination of mission-based exploration and dragon fighting is an interesting one, with the dragon-raising system being one of the most interesting features in the entire game. The overall dragon fighting, however, is far too simplistic, failing to provide a challenge or even create a compelling experience.

The story mode will last you a couple of hours. Playtime is extended when invested in dragon-raising and training. You can also unlock additional content and participate in two-player battles, but due to the lack of depth it is unlikely players will invest much time in it.

How to Train Your Dragon hold up well to the vision of the film, but the game tries to incorporate some of its ideals in gameplay form and comes up short. Kids should get the most out of this game, but everyone else will feel underwhelmed by this dragon. 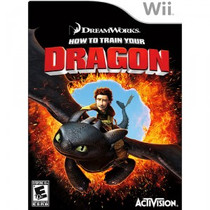