Trade in your wyvern mount for a fleet of spaceships in this genre-mashing sequel.

The original Puzzle Quest: Challenge of the Warlords became a huge sleeper hit through word of mouth and heavy promotion at sites like Penny Arcade. The sequel is a major departure in several ways, but Galactrix, like any other follow-up, aims to capture the same magic and improve on a number of features. It was shown running on the PC at E3 2008, but the upcoming DS version should be essentially the same.

Galactrix is being developed by the same core team who created the original, but they don’t consider it to be a direct sequel because it doesn't continue the story from Challenge of the Warlords. Instead, it goes into science-fiction territory, and the battles now take place between huge spaceships rather than between wizards or knights. You control a single pilot but can have up to three ships, each customized differently. The pilot and each ship gain experience levels independently, so the RPG elements are quite a bit deeper in this game.

Other than the new setting, the biggest change is in the shape of the puzzle board. The original game was based on Bejeweled, so new pieces always fell from the top of the screen. In Galactrix, the board is hexagonal, and new pieces can enter from any of the six sides. The direction they enter is the same as the direction you moved a piece to create a match. It's definitely a more complex mechanic, but it's not too difficult to understand once you play the game for a few minutes. The game was still being balanced at E3, but the studio is planning to make four-of-a-kind matches less powerful (or less common) than in the last game, so the battles can't become one-sided with one player taking several turns in a row.

The map screen works much differently in Galactrix. You can send your ship to many different star systems, and each one has numerous destinations within. Your ship can move freely around the map, not just node-to-node, and enemies will pursue freely as well. Each destination node contains multiple events and functions, so you can shop for new lasers, battle the local warlord, and accept a long-term mission all from one location. The game's money system is strikingly complex, as you'll have to exchange your currency for the local flavor as you move around the galaxy.

In fact, "deeper and more complex" seems to be the mantra behind the game's design. The result is a bold sequel that should offer a very different experience but may be less accessible than Challenge of the Warlords. One thing we do know about the DS version is that it will feature local wireless play (multi-card) but no online mode. We may have to wait for next year's cowboy-themed variation* for that particular feature.

*Silly conjecture, but not a bad idea, eh?

Man, I completely forgot about this game. Definitely something I want.

Dunno from your preview if it had already been done at E3, but when I played it at PAX four-of-a-kind matches didn't give an extra turn. That took a fiver, which did seem to come up more often than the original PQ.

I enjoyed playing this for awhile, but I think the increased depth of strategy might turn off some people who enjoyed the slightly more casual nature of the first game. I'm not sure myself if I'm going to get it. 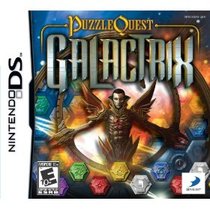