The sequel to the Game Boy Advance title Rhythm Tengoku is coming to America.

Early last month we learned through Famitsu weekly that a sequel to Rhythm Tengoku, Rhythm Tengoku Gold was making its way to the DS in Japan. Today Nintendo revealed that the game will be coming to America as Rhythm Heaven.

The title is a simple rhythm game where players hold the DS on its side and tap, slide, and flick the stylus on the touch screen to the beat. The developers of the title, Nintendo R&D1, are also responsible for the WarioWare games, which Rhythm Heaven borrows heavily from.

Currently Nintendo has not revealed a release date for the title or any other particular details. Check out the official trailer for the game below.

Awesome. Now if only they would include the orginal Tengoku (translated) as unlockable content.

I'm really excited about this game.  For all my hyping of the first one, I never did get around to importing it.  I'm a sad, sad man.

That's some funky game. I want.

They didn't.  Nintendo did.  I fixed it.

I'm really excited about this game.  For all my hyping of the first one, I never did get around to importing it.  I'm a sad, sad man.

Well, start hyping this game, soldier. And that's an order.

Can't wait. I have the GBA version and while it's awesome I haven't got around to reading the translation guide for it yet so I haven't seen everything it offers.

I'm glad that this seems to be an all-new game, but I wonder if they'll throw in the games from the original.  It would be nice to play them in English. 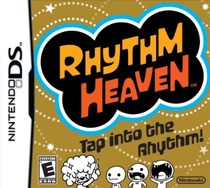