We get the good word on Wii U straight from the horse's mouth.

At last week's Nintendo Wii U Preview Event, we got to sit down with Nintendo of America's Director of Public Relations Marc Franklin to chat about Wii U, the eShop, downloadable content, and the transfer process and limitations of Wii software to Wii U.

Nintendo World Report (NWR): About Nintendo TVii, how do you think that is going to effect the consumption of video in the home?

Marc Franklin (MF): Let me back up for a second and just talk a little about Wii U and why Nintendo TVii fits into that proposition. So we announced at E3 a big game lineup, and we announced we had those three pillars: Games, Social, and Entertainment. We also announced at E3 the social component, which was really based around Miiverse. So today what we talked about was filling in the gaps in the Entertainment Pillar, which is about Nintendo TVii.

The way Reggie positioned it was "it's very different", it's something that some people may think that it's so different for Nintendo to approach, but at the same time, it's very Nintendo. Because when you look at Nintendo TVii, it's taking a concept and making it approachable and fun to use, which at a base level is something that we do with all of our games and our systems. So with Nintendo TVii, the premise is to define, watch, and engage with your content.

We're really excited about it because not only is it a new way to experience your TV content and VOD, but it's packed in and free with every Wii U, and it's available on Day 1. You can start using it. There's lots of great features to it that we can talk about. We're excited.

NWR: There are a few things that weren't really discussed during this conference. The first one is Miiverse, which as far as I've heard today will be there Day 1. Correct?

MF: Yes, absolutely. So Miiverse is a critical part of the Wii U proposition. Make no qualms about it, that is a big part of Wii U. One of the reasons why it's important is you now have this online community that's exclusively focused around games and content that you love. It's unlike anything else. Some people try to compare it to other things, but it really doesn't have a direct competitor. 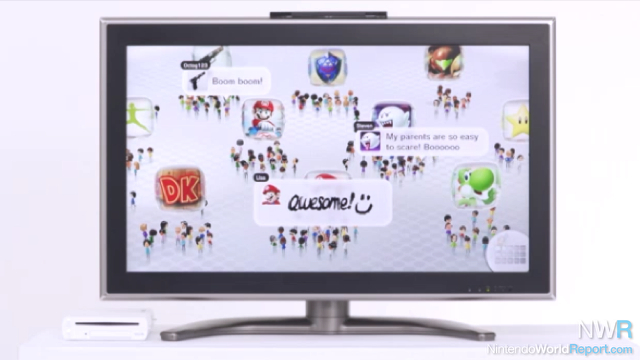 What Miiverse is, is a special community. Literally what it means is Mii and Universe, and that's what it is. It's a gaming universe about games and gamers. Discussion boards and forums and finding friends and meeting new friends and it's all within the context of the Wii U interface. And then underneath that you have all of these different ways you can interact. You've got the aspect of learning new information and sharing information and discovering things about content that you never knew. You can go through the communities, and having direct conversations with people on your friends list. You can go to communities that are around games or applications. You can see the trending topics that are on Miiverse.

On the tiles when you power on your system, you can see what's been trending. You can see what your friends and family have been up to. You can take it a step further; some developers are actually putting Miiverse into the game, so in-game integration. A great example of that is New Super Mario Bros. U. We showed some today, we showed some at E3. As you're going through the game, you can see comments. We'll take comments from Miiverse and we'll put it into New Super Mario Bros. U. You can show your excitement. You can show your frustration over certain gameplay. You can talk about how you're having trouble. You can talk about your wins.

It's just so immersive when you're realizing "how do I get to play games differently?", and it is all about your games, and the content that you love. All of that levels up to this factor that is our goal of Wii U, which is that we want people to play it every day, and we need to give them a reason to play it every day. And that reason is Miiverse, it's Nintendo TVii, it's eShop, it's video chat, it's the 50 titles we have in the launch window.

NWR: With the eShop, that was another thing that wasn't really mentioned today. Is that confirmed to be at launch, and also do you expect a robust lineup at launch, or will it be like, one a week for the first three months? 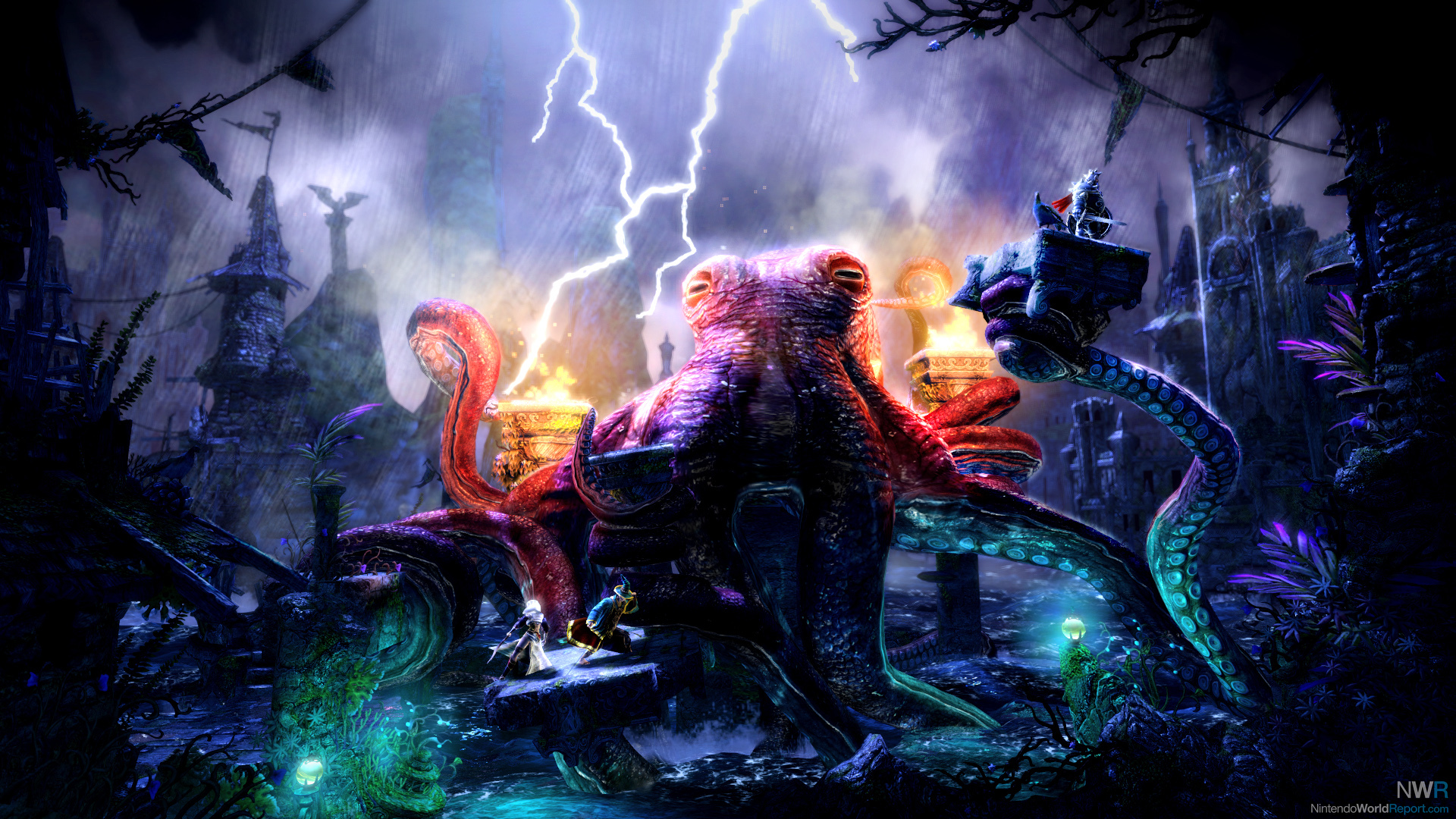 MF: Absolutely, eShop will be available on Day 1. We do have games here today that are digital. If you haven't checked out Trine 2, it looks really amazing. It has special content just for the Wii U version. There's also some other digital games that are here today, but yes, we'll have games on launch day that are specifically digital content, just original and digital.

In addition, one of the things that we've talked about that's important for business critical opportunity is that Nintendo will be making it's games both in packaged forms and in digital form. For people that want to download their games from the eShop, they'll be able to do that. That's a big deal because as you're seeing now with New Super Mario Bros. 2 on 3DS, people are going to the eShop to download that. We've had good response there. So yes, eShop will be available. We've committed to it, and it's going to be an important service for Wii U because it's going to be a way that we're going to deliver content and that people are going to be able to get their games.

NWR: As far as having games at retail and download, and also with the Miiverse integration, are there any third party games that are going to be taking advantage of that at launch?

NWR: Will they have the option to do retail or download?

MF: Absolutely. The option is definitely open to them. You just need to ask each one what games they're bringing.

NWR: Is that the same option for 3DS?

MF: Yeah. The option is open to them. It's up to the third party companies to confirm it.

I don't see any mention of the transfer process, is this the whole interview?

I don't see any mention of the transfer process, is this the whole interview?

It's the first question on the third page.

LOL, I assumed the whole interview was posted in the thread, not just page 1. My bad.

Has Nintendo discussed whether there is virtual console as part of the WiiU eShop on day 1 recently?  I could have sworn someone from PR over a year ago talked about Gamecube games potentially showing up.

RMC at gonintendo.com asked about the sleeve versus case question for Nintendo Land and the rep replied something like, " We are not sure. We are taking input on that." or at least that is how I remember it. Sleeves suck.

Yea, we followed up about that. Not sure either way.

Awesome interview! Loved all the Miiverse talk. This is my most anticipated feature! If Miiverse is as good as I think it is I would take it over Star Fox this generation. That's how excited I am for it!

Awesome interview! Loved all the Miiverse talk. This is my most anticipated feature! If Miiverse is as good as I think it is I would take it over Star Fox this generation. That's how excited I am for it!

Bite Your Tongue!!
I see where you're coming from, but we need us some Star Fox. Have you heard the Connectivity Radio Drama? Sklens is the definitive Fox.

Yea, we followed up about that. Not sure either way.

I'm hoping neither and its loaded on the system.

Ceric - Well, you can hope all you want, but it will be a disc. We know that much.