I spent a solid hour with a solid handheld.

Ahead of a Montreal gaming event I was not aware of, Dreamhack, I had the chance to get my hands on the Nintendo Switch Lite in an hour-long appointment with Nintendo of Canada representatives and play demos for The Legend of Zelda: Link’s Awakening, Luigi’s Mansion 3, and The Witcher 3. I won’t preview these games per se (follow the links for previews or footage of the demos), but I will give my quick impressions after mainly focusing on the Nintendo Switch Lite. 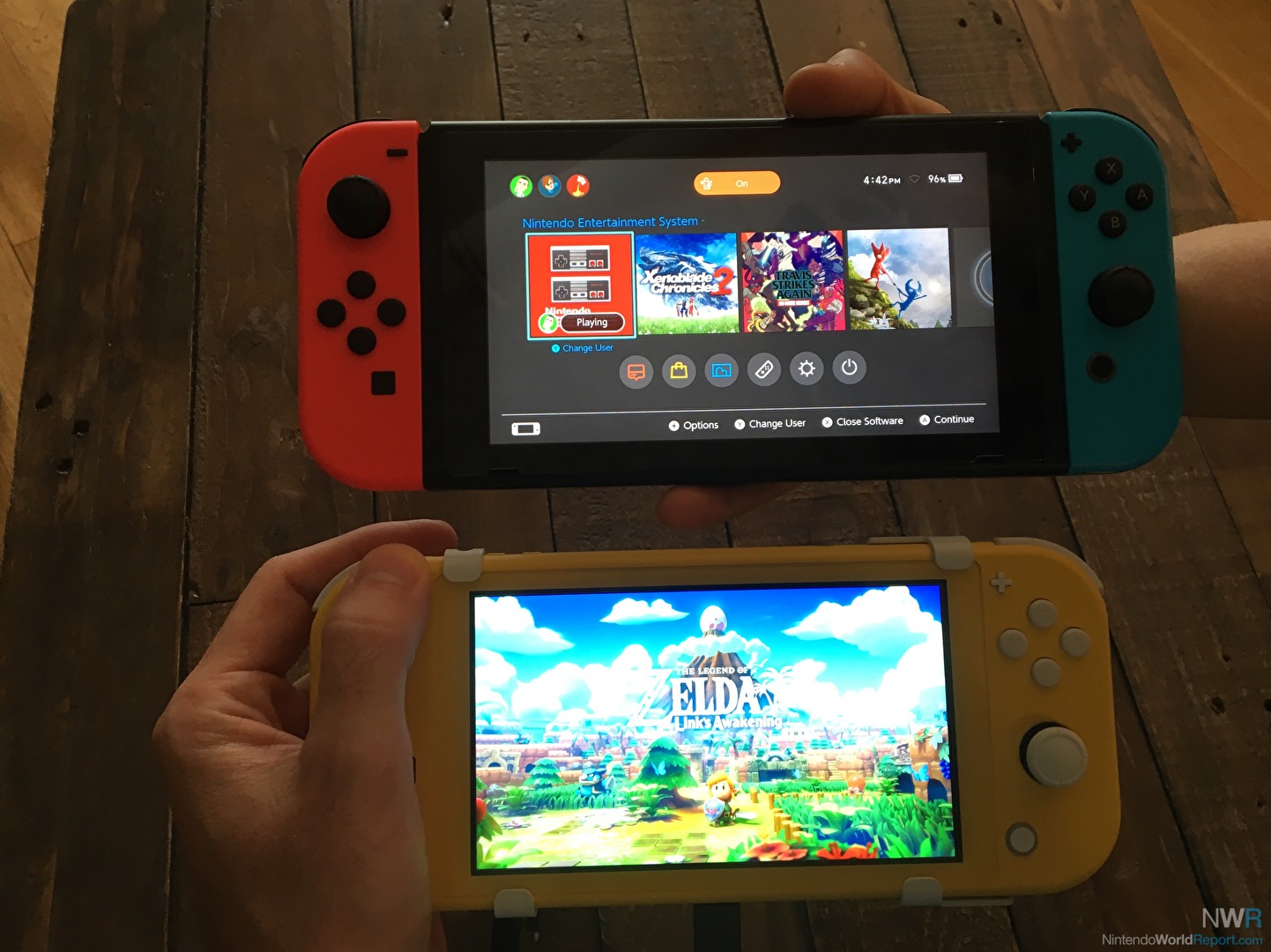 I turned the Nintendo Switch Lite around in my hands for a bit before starting to play any demo, and in retrospect I’m not sure if I was expecting to see anything surprising. It is, as advertised, a smaller and lighter version of the Nintendo Switch. I couldn’t feel the weight difference for myself (approximately 0.61 lbs vs the regular Switch’s 0.88 lbs according to the technical specs) because the demo unit was weighed down by its anti-theft accoutrement, but the size difference is obvious. It’s matte yellow color is nice, but doesn’t have the glow it seems to have in marketing materials. All the buttons feel the same as on the regular Switch. Perhaps the ZR and ZL shoulder buttons felt a bit better to press down than on my regular Switch, but it might just be the difference between something that is brand new vs. my slightly beat up, 2 year old Joy-Con.

Did I say all the buttons felt the same? I meant all the ones that are there: missing are the separate Up, Down, Left and Right buttons of the left Joy-Con, replaced on the Switch Lite by a + Control Pad (D-Pad). Pressing down on a direction has a nice squishy feel to it (as opposed to the clicky feel of the left Joy-Con’s directional buttons), but unfortunately, I couldn’t test its responsiveness as none of the demos on hand actually used it.

The placement of the + Control Pad could also be an issue: low and close to the left edge of the unit (more of less the same position as the directional buttons on a regular Switch with the Joy-Con attached). Playing games on a handheld means handling the controls while also holding the device you’re playing on. When using the + Control Pad, you’re holding the Switch Lite by its bottom half with the top half of your thumb, which is both uncomfortable and weakens your grip. It feels precarious. Again, I haven’t actually played any games with it. I'm just noting that the mere presence of the + Control Pad may not solve the specific issues you may have had using the directional buttons.

One final note regarding the Nintendo Switch Lite controls: it’s by all appearances using the same control sticks as the Joy-Con. Some Switch users (including myself) have experienced “Joy-Con drift”: the control stick registers an input even when you stop touching them, often causing the character in the game you’re playing to move by themselves. Time will tell if the sticks of the Nintendo Switch Lite are as prone to this issue. They may not be. The sticks may be identical but a lot of the innards of the Joy-Con (Bluetooth antennas, IR receiver) didn’t need to be packed into the Lite.

On to the actual game demos. I started with The Legend of Zelda: Link’s Awakening, the HD remake of a game I played through dozens of times as a child. Nintendo stayed faithful to the spirit of the original when reinterpreting the simple sprites of the Game Boy game: the characters look like adorable little plastic figurines. It’s wonderfully appealing.

In terms of level design, the starting areas seem tile-for-tile faithful to the original. But a few little changes stand out to someone who’s played the original to death. For instance, you can find blue rupees worth 5 green rupees around, and your sword swing can cut down three tiles of grass at once instead of just one, making it easier to get enough money to play the Trendy Game. It’s the little things…

I don’t think I’m the target audience for this title. I’ve played this before. I’m good. But this probably will become the version of the game I recommend to others in the future.

The second demo was Luigi’s Mansion 3. Once again, developer Next Level Games iterates on the formula started by Nintendo on the GameCube, adding new gameplay mechanics for combat and puzzle-solving. This time, you can shoot a plunger on surfaces that normally wouldn’t be affected by your vacuum and then suck it up, to bring down a weak wall, for instance, or take an enemy’s shield away. This one new mechanic opens up new possibilities for both puzzles and combat. And there’s the addition of Gooigi, a Luigi clone also armed with a vacuum but with the extra ability to go through spikes. In single-player, you can switch between the two characters to solve puzzles, which reminded me of a similar mechanic in Pikmin 2 and 3. This is a good thing.

Finally, I played The Witcher 3 demo, which was my first experience with this game. I started where someone else had left off and quickly got eaten by wolves. Starting over from the beginning got me to do the tutorial, which was helpful. The frame rate seemed stable, if a little low, but this didn’t prevent me from pulling off the timing required to parry attacks, so that’s good enough for me. The writing was small but legible, unlike in Doom, the other current gen port I have experience with. The resolution seemed to dynamically lower at times in order to keep the framerate up. When that happens, the visuals become noticeably fuzzier. It’s an acceptable compromise for me. It’s slightly distracting, but the game remains playable.

Eventually, my time ran out and I had to make way for the representative’s next appointment. The one hour I held the Switch Lite in my hands, the unit felt sturdy and comfortable to hold (when using the stick), and the screen quality was the same as a regular Switch. The question of how long the control sticks will last is up in the air, but you may want to take the plunge anyway if the extra portability and the price difference appeal to you.

Im looking forward to getting the Lite. I find the normal Switch a bit too big to be used comfortably while travelling.
From what I can tell, they scaled it down to be the same size as a 3DS XL, except wider.
I wish they had replaced the sticks with circle pads. It would have made it thinner, plus remove the drift issue.

I just hope the save syncing works well enough for the games that support it.

It reads like the Lite is a decent compromise to getting a portable-focused and cheaper Switch. The fear of the Joy-Con Drift is worrying, especially since that doesn't happen until you wear the sticks through extended use.

I wish they had replaced the sticks with circle pads.