We go deep into all that was shown about the upcoming Nintendo Switch game.

After months of eerie quiet, Nintendo finally showed off Luigi’s Mansion 3 at E3 2019 across playable demos and developer presentations. Once again developed by Next Level Games, the third entry in the Mario spinoff seems to be a desirable follow-up to pair of really awesome but definitely a tiny bit divisive Luigi’s Mansion games.

We have our own hands-on preview and footage that you can check out, but for the purposes of this video, I’m going to rattle off 5 things that deserve a closer look from Nintendo’s Luigi’s Mansion 3 E3 content.

Luigi’s new vacuum, the Poltergust G-00, has a few new tricks. Your regular old sucking and blowing is of course there. The Strobulb from Luigi’s Mansion 2 is back as well. Nintendo highlighted three new moves: 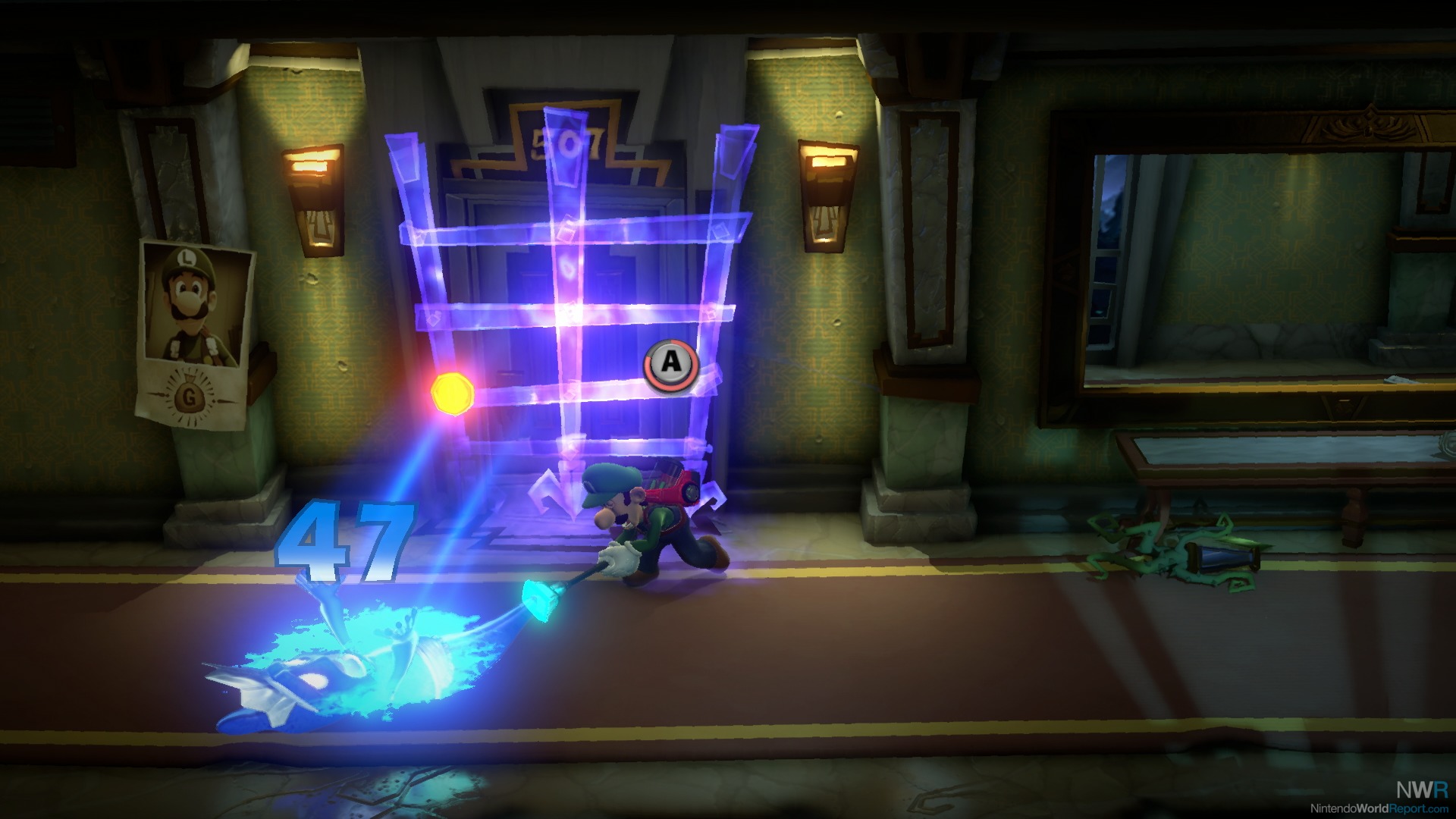 In addition to those moves, the new menu system was also shown off. Following the Game Boy references of games past, Luigi interfaces with the Virtual Boo, a Virtual Boy-inspired device that can be used to view the map, return to E. Gadd’s lab, or toggle co-op on and off. You can also call up the E. Gadd Hotline, a built-in hint system. I love it when the Super Guide shows up in Nintendo games in clever ways. 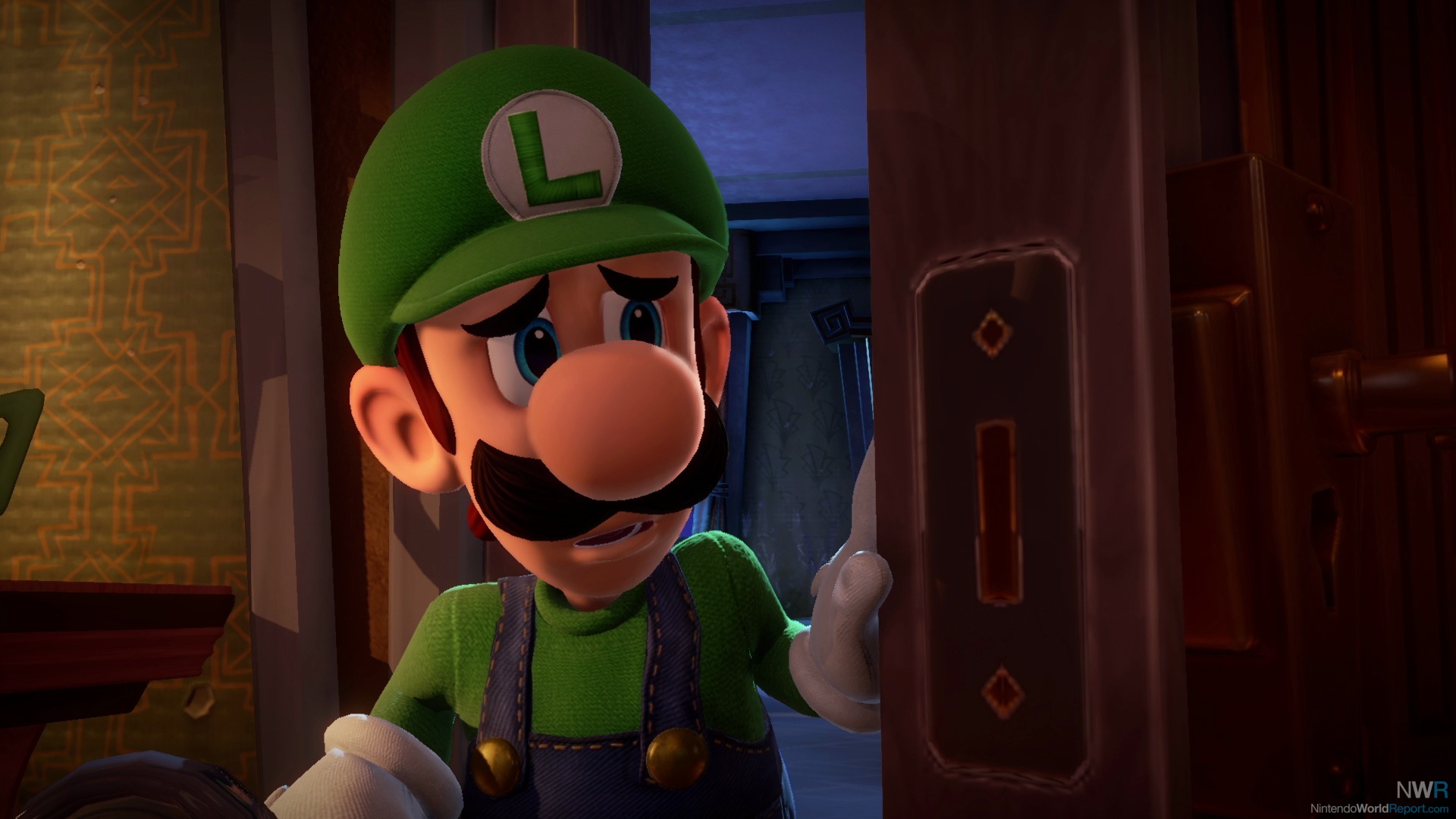 The new moves seem to deepen Luigi’s functionality here, but the most interesting nugget nestled in the Nintendo Treehouse Live segment that focused on these new moves mentioned that the Slam and Burst moves were a part of a Wii U prototype. With Next Level Games involved, I have a hard time believing that the full development of Luigi’s Mansion 3 was slated for Wii U near the end of the Vancouver dev’s past game Metroid Prime: Federation Force, which came out in the summer of 2016. More likely is that following the release of Luigi’s Mansion: Dark Moon in early 2013, Next Level Games spent some time prototyping a Luigi’s Mansion game for Wii U. At that point, the Wii U wasn’t a lost cause yet and hey - Luigi’s Mansion was top of mind with a 3DS sequel and a fun Nintendo Land mini-game. According to comments from Kensuke Tanabe regarding Federation Force’s production, that game was on 3DS primarily because of Next Level’s experience with 3DS development. That could be a reason for why Luigi’s Mansion Wii U never happened as well. Most of this is conjecture based on an off-hand remark during Treehouse Live, though. Potentially we’ll learn more of Luigi’s Mansion 3’s early concepts as release gets nearer.

The Origins of Gooigi

Gooigi is your probable hellspawn co-op partner for Luigi’s Mansion 3. While this bizarre being first appeared in the 2018 port of the first Luigi’s Mansion on 3DS, it was brought to life during the development of this third entry initially. Nintendo’s Kensuke Tanabe desired a co-op experience when Luigi’s Mansion 3 started Switch development, so he took that idea to Next Level Games, who apparently had the name and concept for Gooigi ready to go. 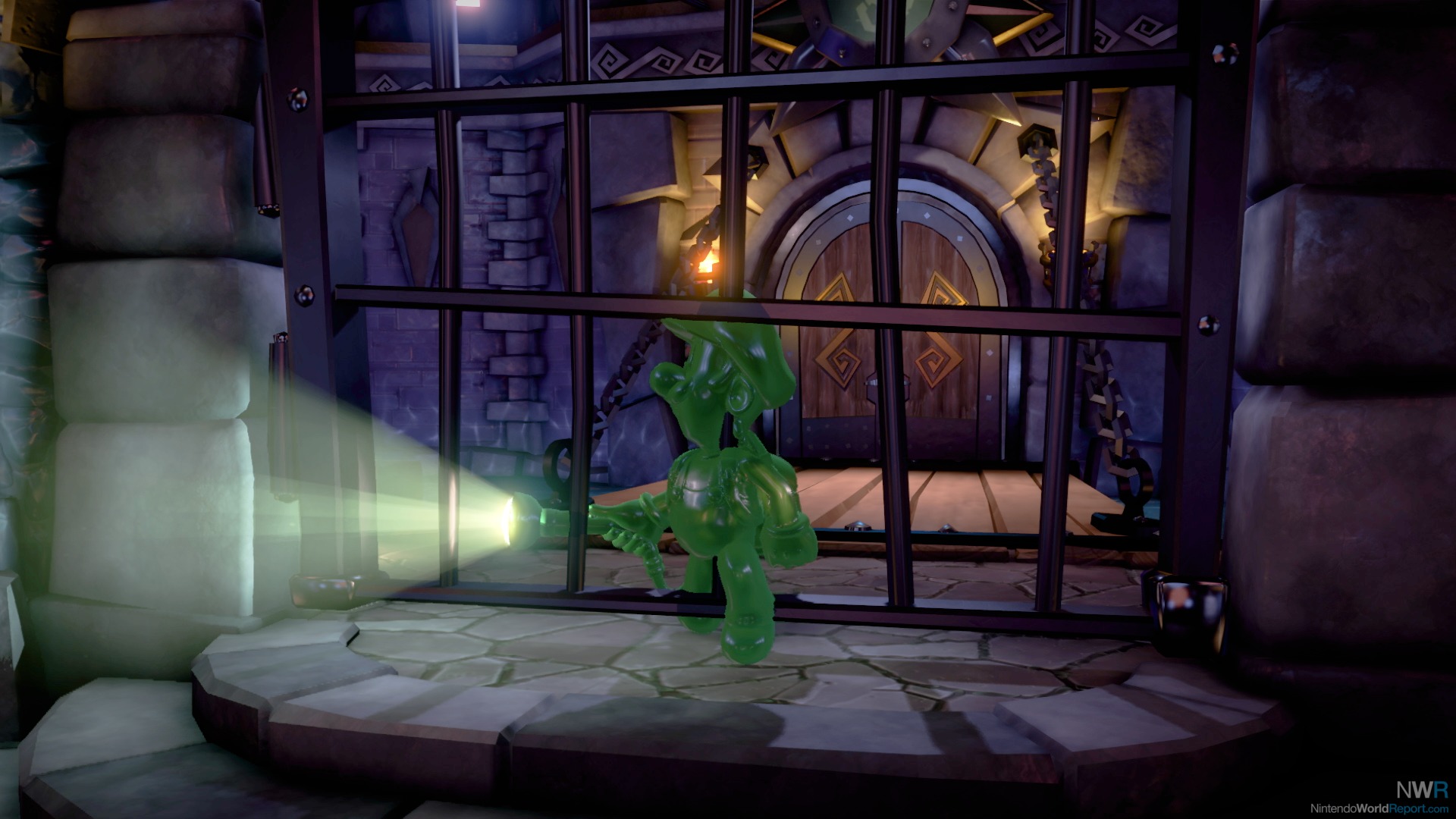 The entirety of Luigi’s Mansion 3 can be played cooperatively, with one player as Luigi and the other as Gooigi. In single-player, Gooigi can be summoned at the press of a button, which will be necessary for some puzzles as Gooigi can slip through fences and walk through spikes to access other areas. Gooigi even factors into the ScareScraper multiplayer mode. If you play with eight players, four of them will control Gooigis. If you have four or less, each player can summon their own Gooigi.

With Gooigi joining Peachette in the ether, what’s next for disturbing twists to Mario characters? Will we see Woshi, the Wario-esque Yoshi? Maybe the follow-up to Super Mario Odyssey will have Daisy in it, but her name will be Maisy and she’s an assassin. Or perhaps Bowser has a marshmallow clone. The possibilities are terrifying.

But before we get too far off the deep end, let’s dial it back and go over the multiplayer mode ScareScraper. Playable with anywhere from one to eight players, ScareScraper tasks players with clearing 5, 10, or a random amount of procedurally generated floors. That’s different from Dark Moon’s multiplayer, which just toyed with existing maps. The procedural generation also has added room types, like balconies and closets. Overall ScareScraper is tougher than the main game and if you can make it to the top, there’s “someone special waiting” according to director Bryce Holliday.

Each floor has a different objective, with eight or nine different options in total. The three shown off are Capture the Ghosts, Find the Toads, and Get the Money. They’re all timed as you have to race through to get all the ghosts, find Toads and deliver them to a portal, and collect a certain threshold of moolah. 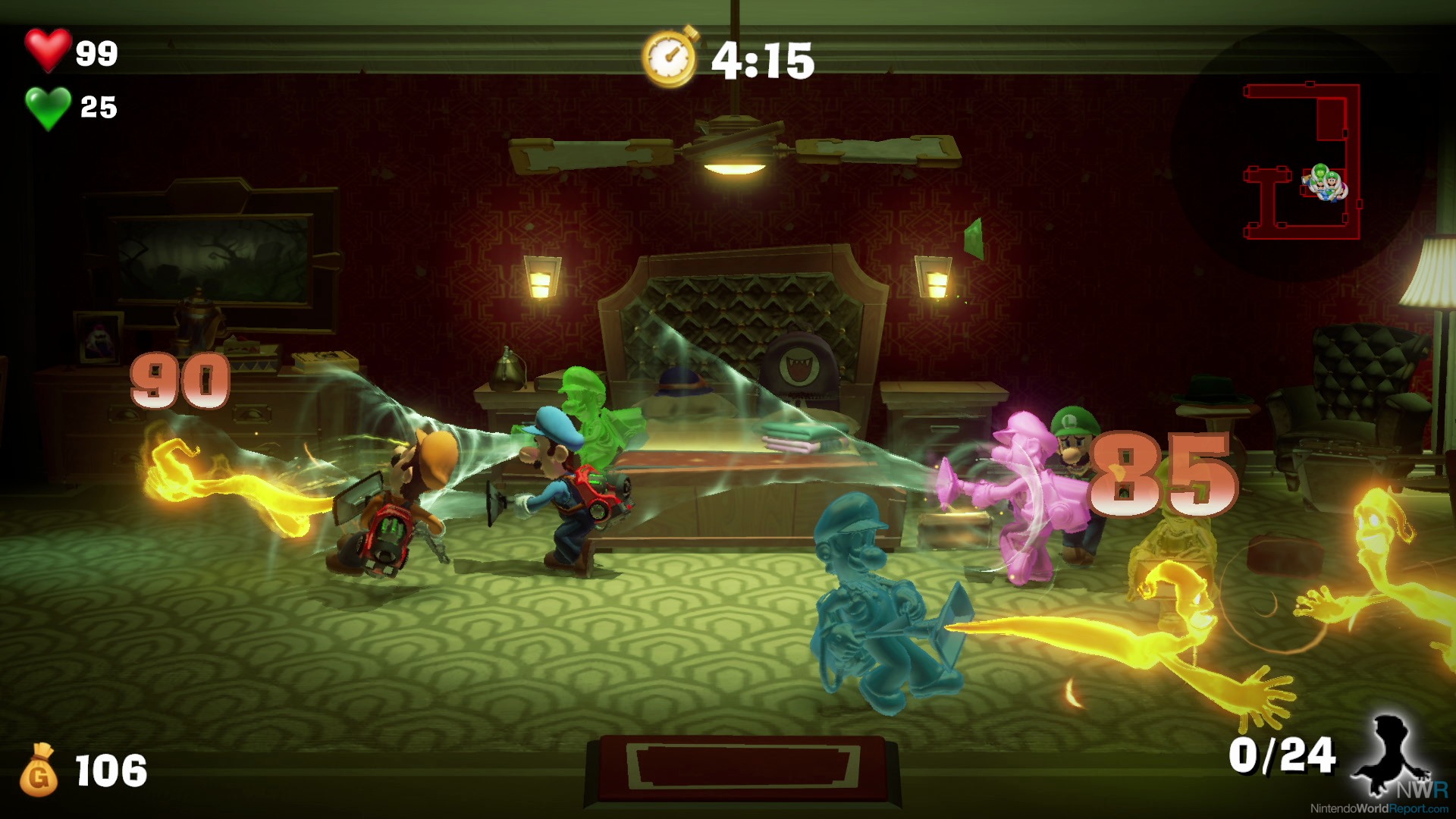 The multiplayer can be played both locally and online. Online can be played with up to eight players, though whether or not those can be from your friend list or randoms was not clarified. You’d hope that would be assumed but this is the same year Super Mario Maker 2 is getting a post-launch update to add in online friend play. However, Luigi’s Mansion: Dark Moon had online friend play, so it seems very likely this won’t be a problem. Adding more fuel to that fire, the Nintendo Switch Online app will be used for voice chat. Locally, you can play by yourself or with one other player on the same system. Eight players can join together via local wireless, which could add some fun chaos to the next large Nintendo World Report gathering.

The multiplayer seems fun. Aside from some bugs, the mode on 3DS was great and this just seems to build off of that strong foundation. It will even make use of the new moves in interesting ways, as two players can work together to do double slams. Gooigi can be spawned by each player if you’re exploring with under four. Special upgrades even beef up your Luigi or Gooigi in this mode. Holliday described three: Super Suction, which deals more damage to ghosts; Super Strobe, which fires off a powerful strobulb; and Trap Detector Helmet, which adds a siren to your head to warn of traps.

Unlike the past two Luigi’s Mansion games, the setting is different. It’s still spooky; you still have ghosts. Now Luigi and the gang get invited to a hotel. But after one sleep, Luigi and Polterpup wake up to find Mario, Peach, and everyone else trapped in portraits. Luigi touches base with E. Gadd, gets the Poltergust G-00, and tries to find his friends. The structure looks to have more in common with the first Luigi’s Mansion, eschewing the bite-sized missions and lack of Portrait Ghosts from the sequel. 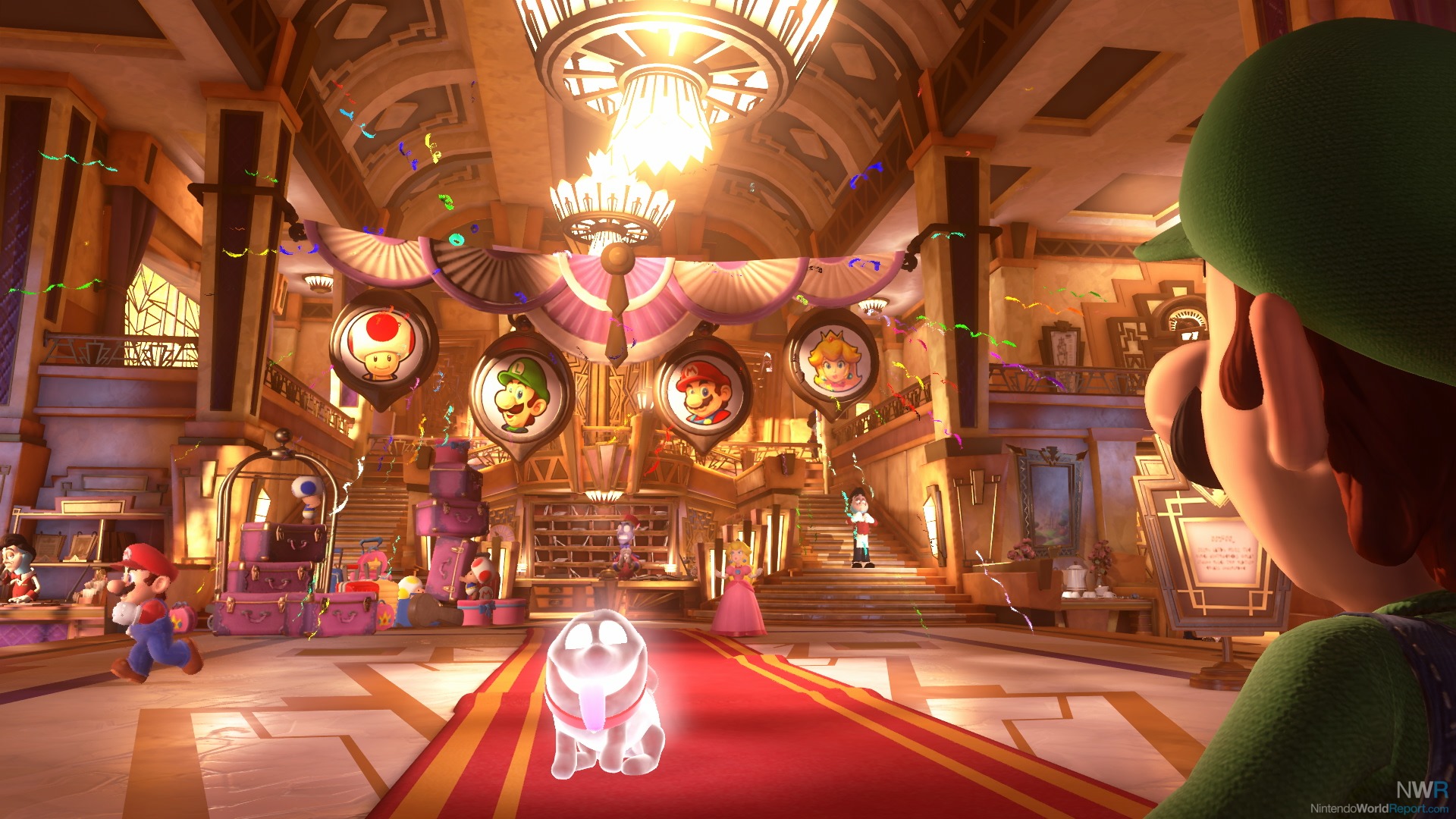 Each floor of the hotel has a different theme as Luigi is tasked with finding the elevator button that is generally held by the floor’s boss. The two floors we saw throughout E3 were medieval themed and movie set themed. Secrets seem to be nestled throughout each floor, rewarding players with money - including the return of diamonds - as well as level-specific items such as hidden swords in the medieval area.

The medieval area seems to be more tutorial-like, or at least is that way for the E3 demo. Luigi sidles through a castle while contending with ghosts wielding shields that must be removed using the new Suction Shot. The level ends with a fight against a jousting ghost. 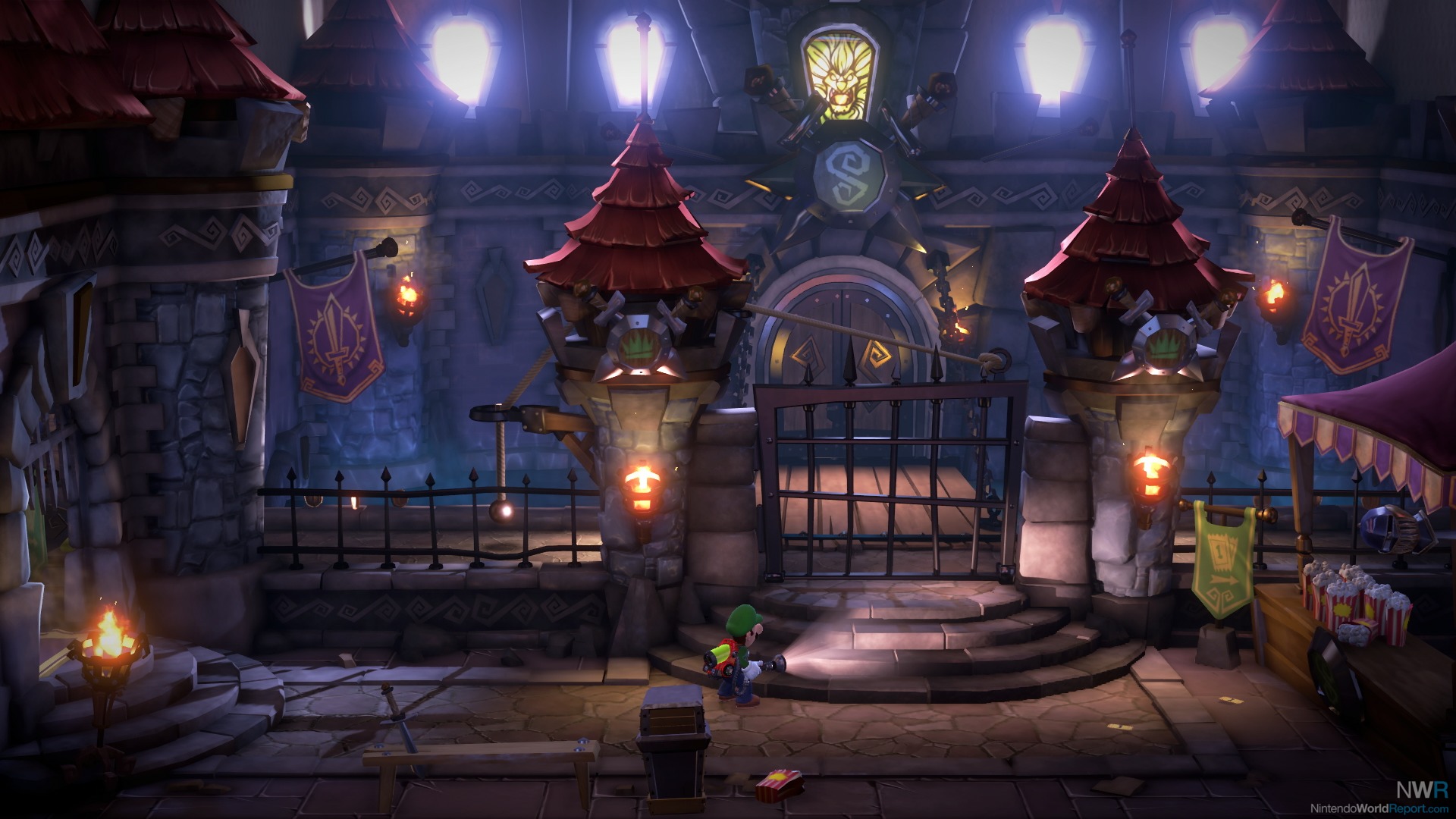 The movie set, which was only on Treehouse Live, has some novel twists to it. The so-called boss of the floor, a ghostly film director named Morty isn’t really that much of a villain. Dude just wants to make his movie. Luigi is tasked with finding his megaphone, which leads him on a quest that takes him to different sets where Luigi has to get behind the camera and film Gooigi doing death-defying stunts.

The floor builds to Luigi returning with the megaphone, ending with Morty shoving Luigi onto the set of his latest movie, a Godzilla-inspired monster fight. The boss of the area is a ghost in a Godzilla-esque suit on a miniature city set. Luigi has to smash buildings and the boss to win. Finally, Morty relents and gives the elevator button back. Nintendo teased that you will be able to watch the movie you made with Morty later in the game. 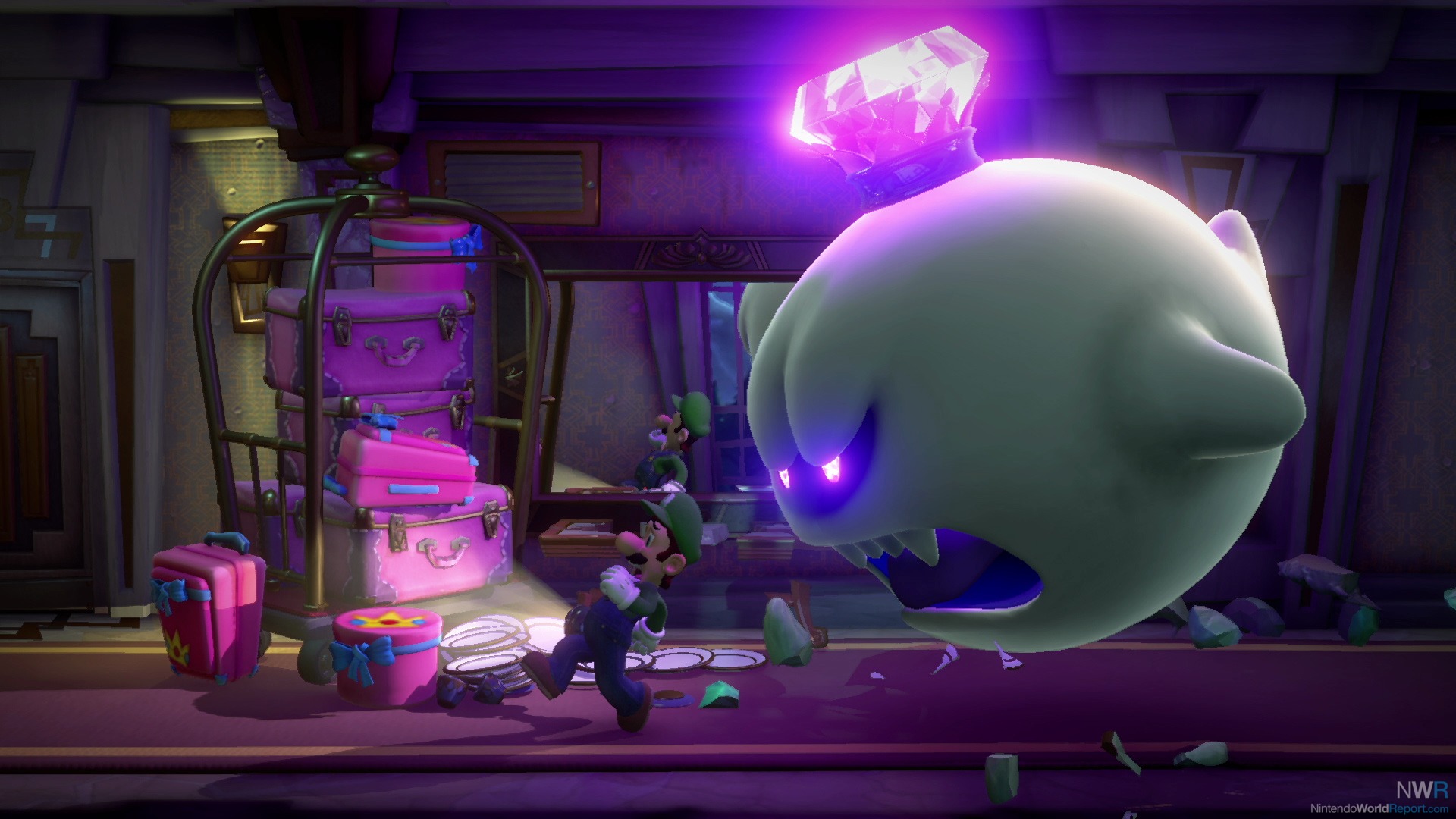 The movie set also has some really fun Easter eggs referencing Next Level Games’ past work. Check out our other video diving into those for more details. A cute conceit is how Luigi zooms around the sets by warping through TV screens. On the top of one of the TVs is even a reference to Luigi’s debut year of 1983.

We really only got deep details on two floors, but if the other floors have as much variety and character as those, I can’t wait to see what they will hold. Of course it wouldn’t be a Luigi’s Mansion adventure if King Boo didn’t show up, but outside of a brief tease in the trailer, we didn’t see anymore of his royal ghost shenanigans.

And that's all we have regarding Luigi's Mansion 3 for now. It'll probably be a while before we see more, likely sometime over the summer when maybe Nintendo has another general Nintendo Direct or starts to show off their holiday lineup.