200 minigames!? 5-second NES games!? What in the world can this mean? Bloodworth gives full impressions of all the nose-picking action at D.I.C.E.

Starting up the shiny new GBA SP, I was greeted with a typical Wario-style introduction. While channel surfing on his couch, Wario comes across a commercial announcing how profitable video games have become, which gives him a brilliant idea. Immediately, he rushes out to buy a PC and starts his own gaming company, Wario Ware, Inc. Soon, he’s not only transformed his pad into a full headquarters, but has called several friends across town to share in the profits as well.

There are several modes that allow you to play the microgames in different settings, but the main game has you starting at Wario’s place and progressing on to new developers across town. Every time you move on to a different developer, you’ll be treated to an entertaining cut-scene that sets up that developer’s theme. Once you get started, you’ll be presented with a status screen that shows how many chances you have left to screw up, how many games you’ve beaten, and what level you’re on.

After a couple seconds of looking at the status screen, a random minigame will pop up, and you’ll have a total of five seconds to identify the goal and complete it. Instructions are simply one-word commands that flash on the screen: Jump, Dodge, Shoot, Catch, Dress, Vacuum, etc. It’s a frenzied test of your reaction time that will make you curse the need to blink. After playing about ten of a developer’s games, you’ll have a “boss game" to complete, which is usually longer and more in-depth than the others. Once you get past the boss game, the level rises forcing you to do MORE in the same 5 second time frame. For example, at level 2, you will need to jump on two goombas instead of one. At level 3, you’ll need to jump on three, and so forth.

After you have cleared enough games, a new developer will open up with a different batch of games. The developers each have unique themes and status screens. Jimmy will have you playing sports games like bowling, tennis, or jump-rope on his mobile phone, and every time you lose a game, one of the battery indicators will go out. When the battery’s dead, so are you. Another girl has games based on personal hygiene; you’ll have to do things like put in eye drops, pick a nose, brush teeth, cut hair, or sniff up a drip of snot.

What’s likely to be the biggest attraction, though, is the batch of 5 second classic Nintendo games. The status screen is set up like a Game Boy playing a very obvious spoof of the original Dragon Warrior. Your chances are displayed as HP, and the number of games beaten is displayed as EXP. As the character walks along, you’ll get a message saying, “A game has appeared," and after you complete a game, another message telling you, “You have felled the game," as if it were a monster. The number of games is astounding, and includes F-Zero, Super Mario Bros., Coffee Break (the flyswatting game from Mario Paint), Metroid, Duck Hunt, Balloon Fight, The Legend of Zelda, Dr. Mario, and I even spotted Virtual Boy, Super Scope, and R.O.B. games. Again, since these are all 5 second games, it’s very simple. In Zelda, you’ll need to enter a cave. Mario will have to jump on goombas, and you’ll need to avoid obstacles in Balloon Fight.

Before putting the game down, I noticed something on the side titled Jumping Forever. I soon encountered a hilariously sappy-looking title screen and found myself playing jump-rope as Wario. You just keep jumping and jumping and jumping as the rope gets faster and faster, until you fall flat on your face. I sucked at it, but making it past certain benchmarks may unlock other games.

Overall, Wario Ware, Inc. Mega Microgame$ looks like it will be an instant hit this summer. It’s great to play during short intervals, like waiting in line or riding the bus, and is the perfect game for anyone with a short attention span. Wario Ware is scheduled to be on shelves alongside Wario World on May 26th. 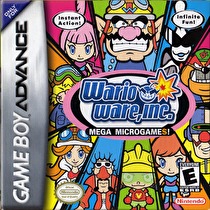