Going into The Conduit I didn't really know what to expect. As we all know the game has been strongly hyped by just about every media outlet everywhere and has become the darling of core Wii enthusiasts.

Upon starting the demo I was thrusted directly into combat, as I had taken over for someone who had seemingly lost interest. I immediately noticed that the world was very well detailed, the graphics crisp and clear, and the visual effects quite impressive. It took me a minute to get my bearings, but once I did I was blasting aliens like a champ. The pointing was responsive, but not overly so, and the aiming felt natural. The only issue I seemed to encounter occurred when I moved too quick. In those intances it seems as if I managed to point past the screen, forcing my reticule to the opposite end of the screen causing an abrupt and unnatural turn. The only other minor issue occurred with melee attacks. In the demo, that function was mapped to Wii Remote waggle which completed messed up the location of the reticule, making it hard to seemlessly transition between shooting, and meleeing.

As I worked my way through the demo I dealt with three unique enemies, each of which featured their own unique attack strategy. The heavy grunts were most willing to take shots and had bigger health bars. They employed some advanced maneuvering, as they attempted to hide behind objects in their pursuit. Following defeat of these enemies and their spawn gate, a new set of enemies began deploying for their own spawn point. These enemies were faster and dodged alot, but typically died in one or two well-placed hits. The final enemies were small fly-like creatures that wwere spawned by the boss character at the end of the demo. These enemies died in a single shot and typically lined up in front of me and dashed inward in an attempt to harm me.

As I mentioned, the demo ended with a boss fight. This creature reminded me strongly of the ant lions from Half Life 2. Obviously, this boss was far larger, but visually similar. I had a hard time defeating the boss and ultimately had to have the Sega rep on hand show me how to defeat it. As it turns out, there is a very small weak spot that is revealed when the creature raised its front legs to attack. My biggest issue with this is simply that there was no visual feedback whatsoever when I had hit that spot previously. It made it tough to properly attack the boss. This theme of lack of direction was consistent throughout the demo.

In other instances, such as solving puzzles, there were no on-screen instructions or directions, making it tough to decipher what to do. I'm not sure if this is a product of playing from a random point in the game, or a problem the game in general suffers from.

Overall, these issues were minor, and the game was quite fun. If the demo was any indication, the game will be quite challenging. The game also gave off a very strong Metroid Prime vibe which resounded well with me throughout my time with the demo. If anything, my overall impression of the game has vastly improved after getting some hands-on time with it.

This theme of lack of direction was consistent throughout the demo.

Games like Wii Music and Nintendogs have made you soft!

Did the HVS guy with the spikey hair walk over to you and ask if you were having an "insane hardcore experience"? 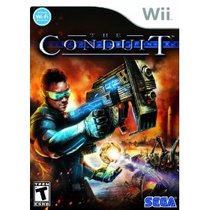