Have you ever ordered a steak and were just given mashed potatoes? Yea, it's kind of like that....

HANDS-ON: Madden comes back and delivers a huge hit....

HANDS-ON: The demo featured the Patriots and the Falcons. Luckily, the game plays better than those teams did last week....

Did these two publishers bring anything noteworthy to the Nintendo 3DS launch?...


My Week and a Half with the 3DS

Nintendo World Report got their 3DS unit in, and we'll be going over everything about the system before it comes out....

Next up, we look at some of the best offerings from third parties....

Madden makes a portable return, and NWR gets the lowdown.... 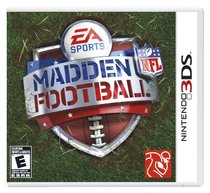