A discussion of Sparks of Hope and a game maker's favorite video game of all time.

On October 20, Mario + Rabbids Sparks of Hope finally releases on Switch, and I had the opportunity to speak with its creative director, Davide Soliani, about its development, the characters he loves, and even his all-time favorite game. Thanks to Davide for his time and his thoughtful responses.

Davide Soliani (DS): I think it didn’t, to be honest. Just after producing and developing Kingdom Battle, our venture was setting a new journey that was Donkey Kong Adventure. In there, even if it was just a DLC, in fact it was almost a 1.5 game because we introduced Donkey Kong to the equation and Donkey Kong had these long arms that define all his abilities. And to express these abilities, basically we had to almost change the way it was working, the combat system. Throwing enemies, throwing teammates or carrying them, those new abilities were really the things that inspired us to move to Sparks of Hope, which was a totally new game. These desires of making the player feel freedom while controlling their character, both in exploration and in combat. So I would say that it was Donkey Kong Adventure inspiring us for the combat system and exploration system in Sparks of Hope.

JR: Who is your favorite character in Sparks of Hope and why?

DS: So first of all it was not easy to create two of the new Rabbids characters (in Sparks of Hope) because in Kingdom Battle, Rabbid Peach was a show stealer and even in Donkey Kong Adventure, so finding someone that could be on stage and on par to the charisma of Rabbid Peach was not easy. But then we created the Rabbid Rosalina, which made us laugh a lot, and we have been able to find a recipe that was interesting enough to be a show stealer. While Edge is a character that is inspired by old Japanese RPGs, so that we wanted to do so much. Today, I'm always changing my mind because I keep playing the game and I keep discovering myself new ways of interacting in combat. But today I would say that it’s Rabbid Mario. In between Rabbid Mario and Edge. Rabbid Mario because with the introduction of the voice, he's saying so many stupid stuff that every time I laugh, even if it's not doing something crazy; he’s just speaking and I laugh. And then I would say Edge because of her ability and how she could synergize with the other heroes. 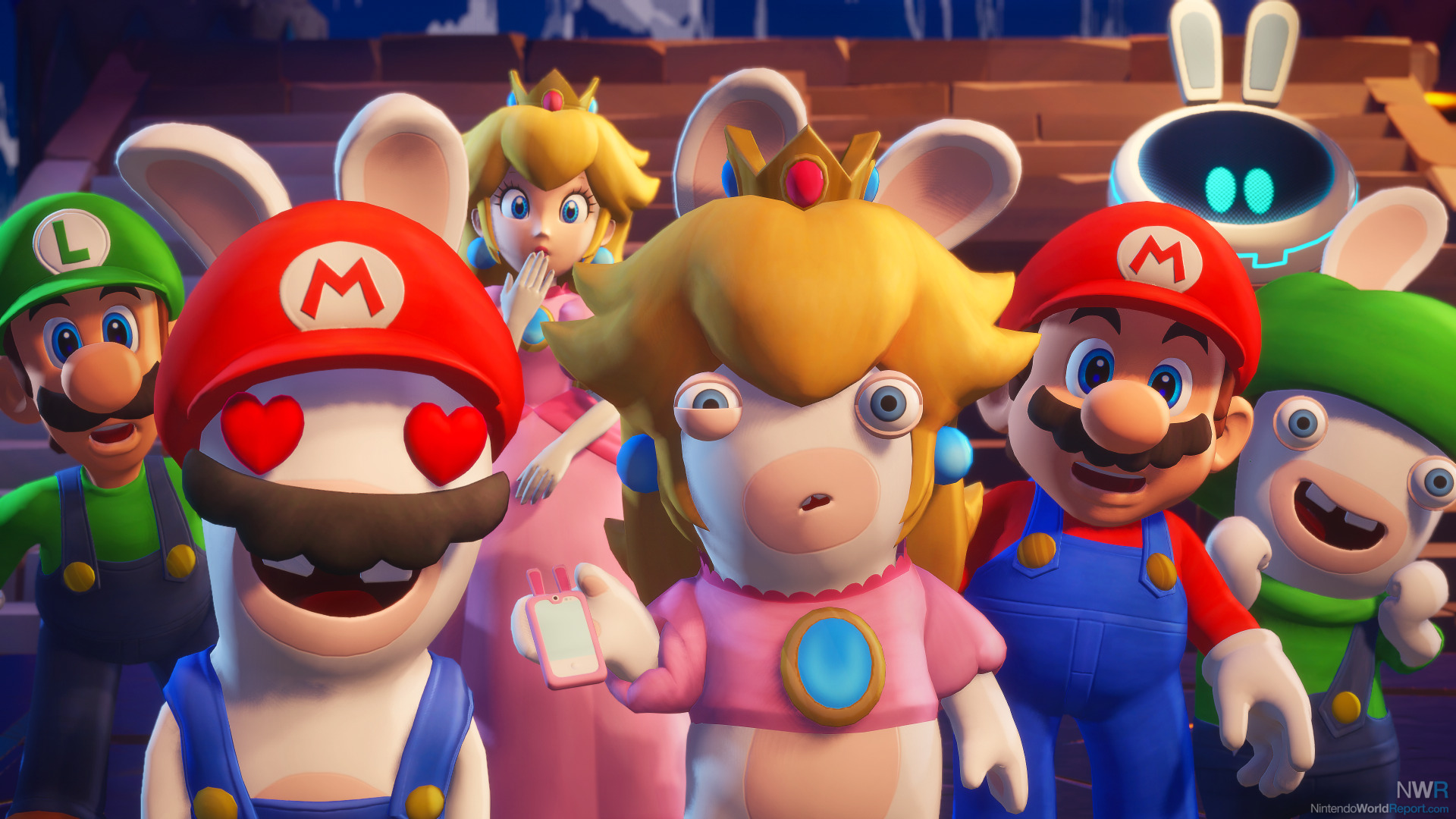 JR: Obviously, Nintendo is quite protective of their intellectual property, especially so with Mario. Did you run into any situations in making Sparks of Hope where you had a challenging interaction with Nintendo and what their characters might be doing in the game?

DS: I think that many things changed since we started the production of Kingdom Battle till today, because we never stopped working with Nintendo. Nothing major changed in the way that we are working together, but if there is something that we gained out of this working relationship, it is mutual trust. Of course today, we can ask more extreme stuff compared to the past. At the beginning in Kingdom Battle, some of the major problems were making sure that the player could see movies or screenshots of Kingdom Battle without mistaking that kind of game for a classical Mario platformer. That's why we were using Beep-O as a leader of the group kind of character and that’s why both in exploration and combat you were moving Beep-O, and not directly the character. But for example in Sparks of Hope, now you directly control your character. You can choose who is the leader, it could be Mario as well and then you can control Mario directly in combat and you can also team jump, and team jump is in real time, so there are boundaries that we decided to expand mutually because of this trust that we gained in those long eight years. So there is only one rule that cannot be broken, and the rule is you cannot jump because it's not a platformer game. But we invented our way of jumping, which is the team jump, which is fine because it's only happening in this game.

JR: Did you ever consider applying the turn-based strategy treatment to a different Nintendo franchise like Kirby or even that of a completely different company like Disney’s IP?

DS: I never thought about this thing to be honest, but because we are working with Nintendo for eight years, of course we talked about several different IP because before being developers, we are players. We are very passionate players and we love playing with older Nintendo IP, so I think there are fascinating ideas that we could explore, but who knows?

We always must have a good reason to present something to Nintendo. So Nintendo, at the very beginning, told me: Don't be shy. Ask everything you need. The worst case scenario we are going to say no and explain why. So I took them very seriously and all my desires I expressed them to Nintendo. So sometimes I've been lucky, sometimes no. And then I also insisted sometimes to change the situation, so in a way Sparks of Hope and being able to finally control the characters in real time was something that we achieved because of this trust that we have together, and doing DK (Donkey Kong Adventure) was possible because we had a very serious gameplay idea for this character, and not just because okay, we want to use the IP. 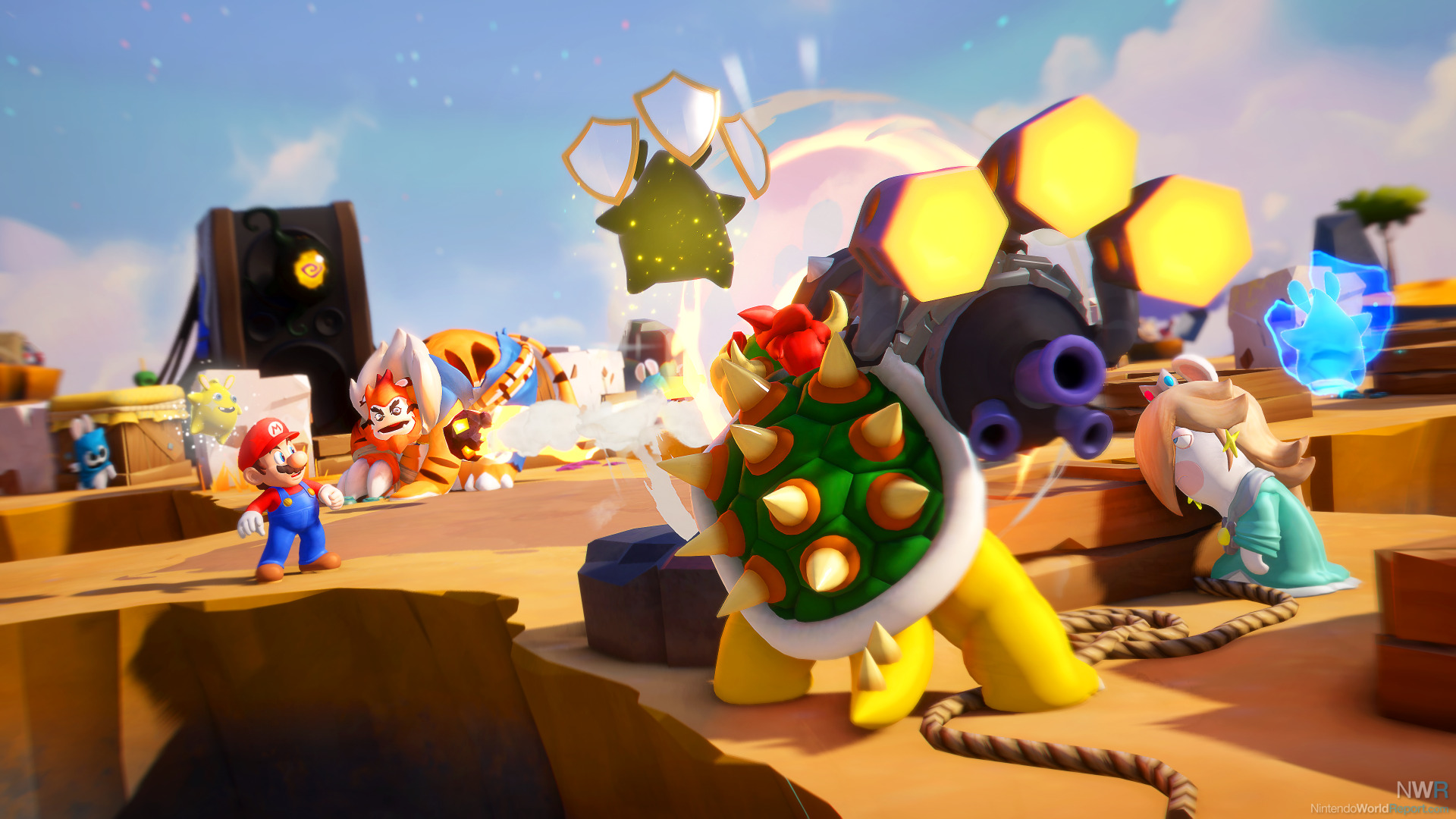 JR: In creating a sequel to a very well received video game, how do you find a balance between iterating on what came before while also giving fans more of what they enjoyed?

DS: That’s a very nice question because I believe that Sparks of Hope is not a real sequel, but it's almost a new game. One of the things that that the player appreciated the most in Kingdom Battle was the combat system, and we changed it. It's not the typical plan of action that a company takes, you know, but as a team we truly believe that we needed to evolve the combat system and innovate on it. So for us it was crucial to have the courage to move forward and to propose a real reason for the player to come back because there was something new to try. Iterating was key because we had to find the sweet spot between players feeling that this combat system is based on the foundation of Mario + Rabbids Kingdom Battle and at the same time perceive and see what is new, what is being brought in terms of new synergies, possibilities, and freedom. So during the interaction we went too far in all directions; we went to a completely 100% action game. And this was too far. It was not attached to the Mario + Rabbids universe anymore, or we went in the opposite direction and that was not enough. When we started to again find a good vibe while controlling the character--vaulting over cover, team jumping with direct control and quickly checking if enemies were within the area of attack with a separate button now instead of an action console—this is where we knew that we were going into more active action.

JR: What is your favorite video game of all time and why?

DS: Of all time? Can I say two? It's super hard because I’m going to say something because those two games touched me in a way that no other game would be able to. Because now I’m older than I was in the past. Uh, Super Mario 64 and Ocarina of Time. I love Breath of the Wild; I cannot wait to play the new one. I will close my cell phone. Nobody in my studio has to bother me.

DS: It's exactly what I do, but with Ocarina of Time, I basically called work saying I won't be there for 10 days. I made a super huge purchase of groceries and stuff. I unplugged the phone, and I disappeared from the planet for 10 days. But uh, in the other one, it's Mario 64. There was too much at the same time: like 3D, the analog system, the controller, which is my preferred controller. And my mind blew up.

You can check out our full review of Mario + Rabbids Sparks of Hope right here.