An incredible strategy RPG and one of the best Mario crossovers ever.

I've reviewed dozens of RPGs in my time with Nintendo World Report, and after finishing them and posting my impressions, I rarely ever go back and try to achieve 100 percent completion. Having completed 78 percent of Mario + Rabbids Sparks of Hope upon rolling credits, I knew even before reaching the end of the game that I would be returning to see through any unfinished business. An improvement upon Kingdom Battle in almost every way, Sparks of Hope is a must-play strategy game and one of the finest Mario crossovers on a Nintendo platform.

The overarching plot sees Mario, Luigi, Peach, and their Rabbid counterparts set out to find Sparks and use their power to defeat the dark cosmic being known as Cursa. Cursa has infected the game’s five worlds with Darkmess, a sticky, black goop that wreaks havoc on each planet. By eliminating the Darkmess and recovering purified Darkmess crystals, the heroes can power up their spaceship and travel to the next world, eventually leading up to an epic fight with Cursa herself. Along the way, Spark Hunters also try to halt your progress and the confrontations with them make for memorable and challenging end battles.

The sum of its parts is what helps Sparks of Hope add up to a compelling whole. The balance between exploration and combat with a sprinkling of story is thoroughly satisfying. While those hoping for a narrative that's a bit meatier may be left wanting, there's no denying that the primary gameplay loop is both impossible to put down while also working splendidly in short bursts. The main quests on each planet make up less than half of the available content, and so anyone wanting to take their time to see everything is rewarded with many more battles and puzzles to overcome. 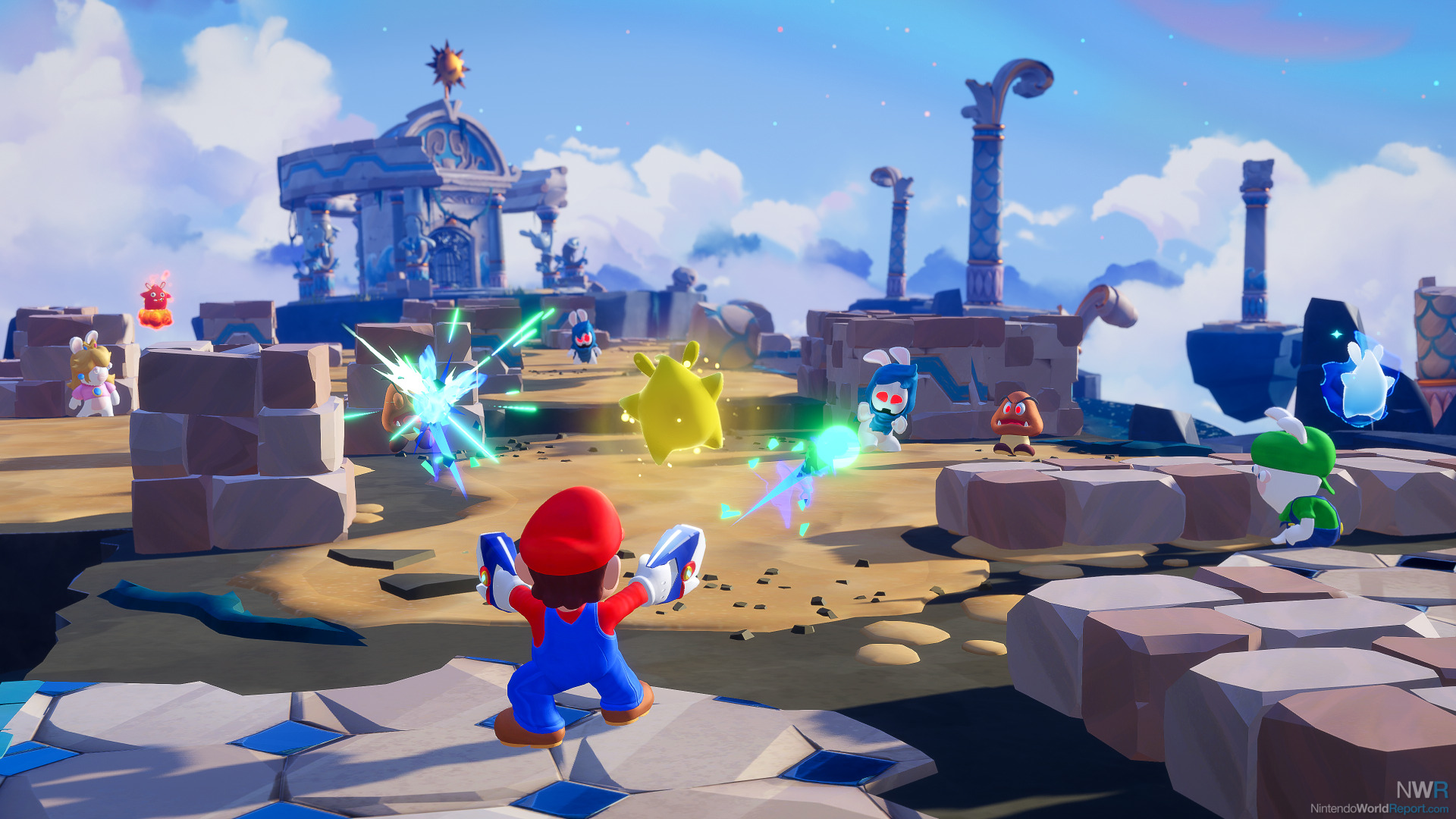 The environmental puzzles aren't overly difficult and provide a refreshing break from the dozens of battles you'll participate in. Some are hidden away behind locked doors, while others are required to advance the main quest. Many award money, collectible memories, star bits to power up your Sparks, or Planet Coins that can be spent to purchase weapon skins and special items. While most of the puzzles involve the familiar pushing of blocks, having to use the scanning and pulse-generating powers of your robotic pal Beep-O, who returns from Kingdom Battle, adds another layer to this facet of the game.

Combat plays out in turn-based battles generally against a small group of foes, with story battles generally amping up both the size of the map and the number of enemies. Some encounters task you with surviving a set number of rounds or navigating to a specific point that's a perilous distance from where you start. A handful of side quests even force you to bring a specific pair of characters into battle, requiring that you use their unique abilities in tandem to succeed. Learning the strengths and weaknesses of each party member and the Sparks that best complement their kit goes a long way to emerging victorious. 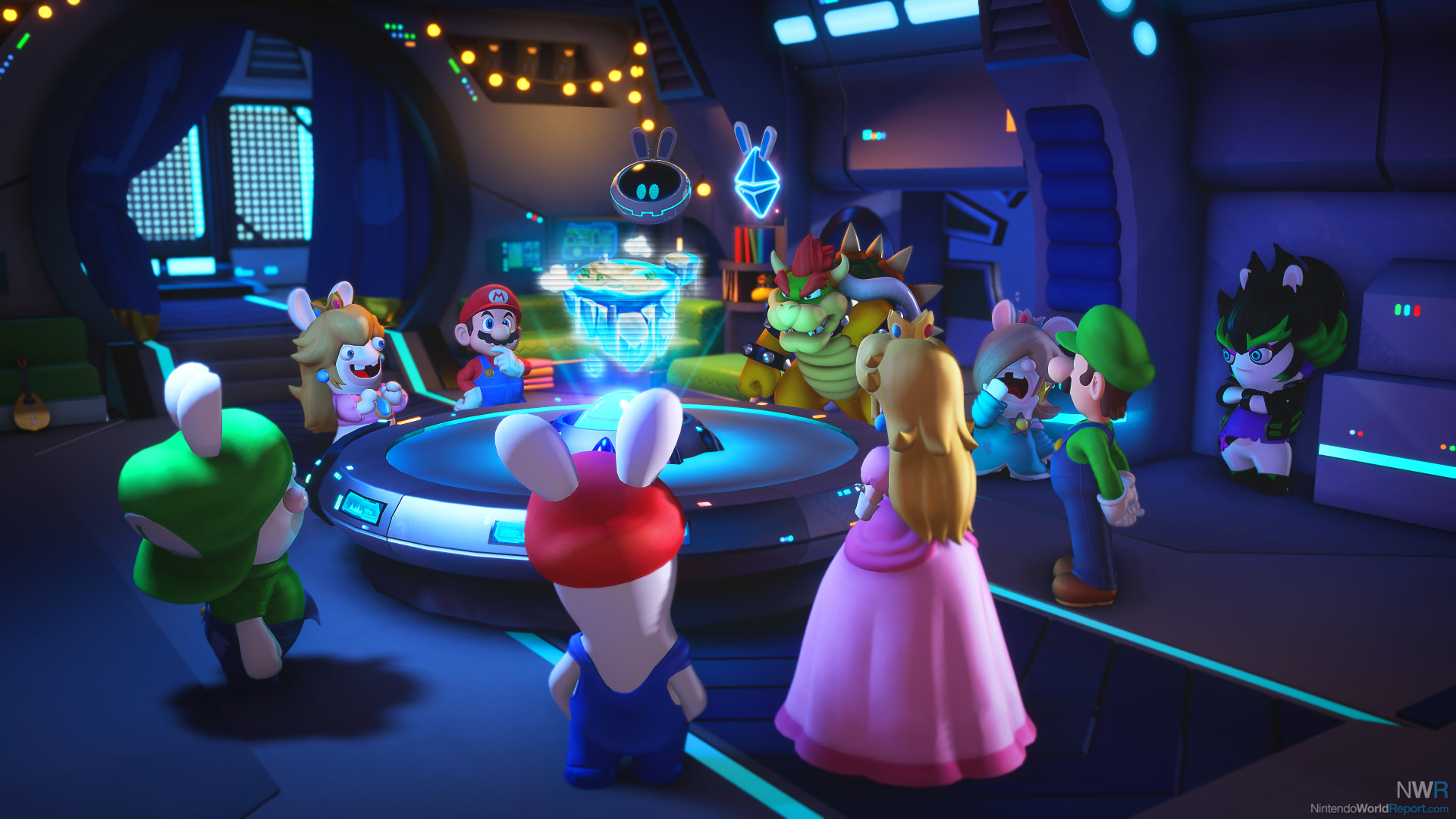 With a total of 30 Sparks to collect, the possibilities for mixing and matching are numerous. Through upgrades, the effectiveness of each one can be improved, offering greater protection, utility, and damage output. You'll have Sparks to cover each element: fire, splash, electricity, gust, and ooze, and equipping these instantly offers protection against attacks of the same element. Some Sparks can be activated to deal waves of elemental damage around your character; there's even one to revive fallen party members or summon a specific enemy to fight for you. While certain Sparks worked well with my play style, I still found myself switching them in and out regularly. Their inclusion adds a wonderful depth that improves upon the formula of the original game.

Each of the first three planets sees a new character join your squad, starting with the moody Rabbid version of an RPG protagonist Edge and ending with Bazooka-toting Bowser. Rabbid Rosalina rounds out the group, and her stasis special ability is among the most useful in the game. Through each character's skill tree, you can customize them to allow more dash attacks, greater movement, and more potent special moves. Given its 20-30 hour length, Sparks of Hope benefits from not having an overly bloated cast, but it would have been welcome to see a bit more interaction among them. 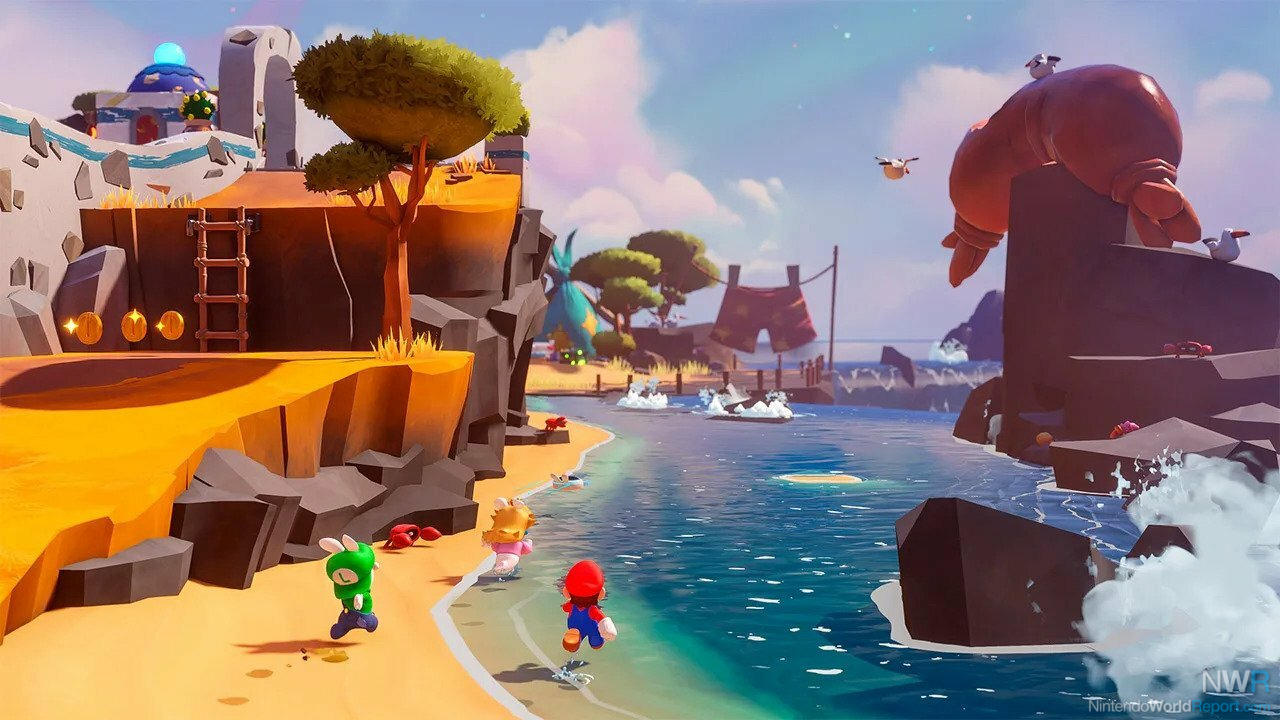 At the beginning of every battle, you have an opportunity to heal your team, change its composition, and scout out the map. You can also change the difficulty level at almost any point in the game, including altering enemy threat level or even turning on invulnerability for your squad. Sparks of Hope might be an even better entry point for the strategy genre, but don't let that sentiment make you think you're in for a cake walk. One of my main concerns in previewing the game was that the first two worlds felt a bit too easy; fortunately, the challenge scales up nicely starting in the third world. Not only that, but as you collect more Sparks, you unlock contests against some immensely tough opponents.

In terms of how Sparks of Hope looks and performs, the vibrant colors and changing palettes that show up as you rejuvenate and purify each planet are joyful and eye-catching. As the camera pans around the world and some of the larger battle maps, object pop in is slight but noticeable. The framerate appears to drop on occasion, especially when playing with the fast forward activated during busier moments in combat. Overall, it's hard not to see the second Mario + Rabbids title as one of the prettiest on Switch, especially when playing docked. 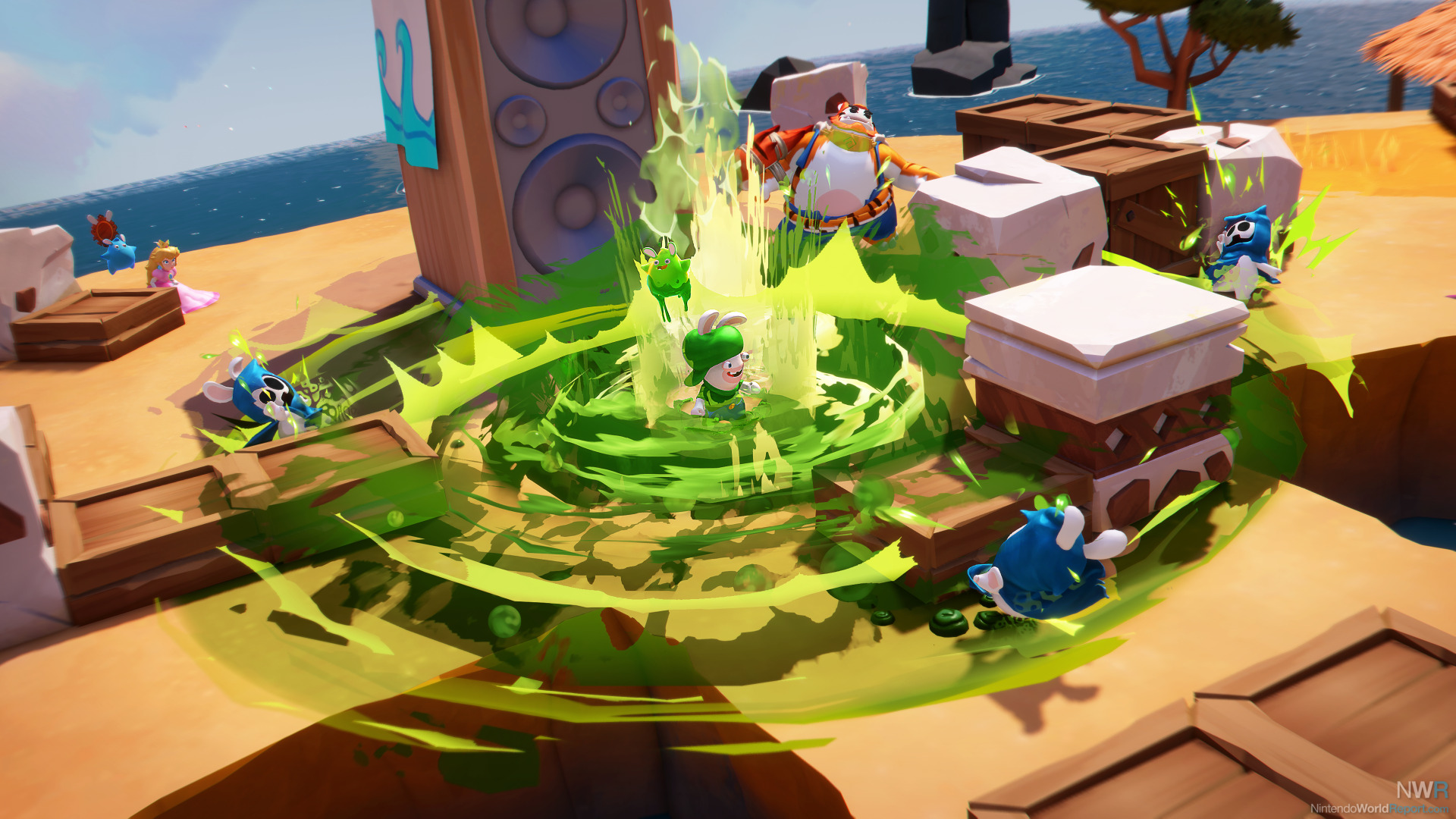 What I really love about Sparks of Hope is how it constantly rewards you for almost everything you do. Experience points earned from successful battles open up new skill tree possibilities; trees and bushes can be shook to produce coins and even items for use in combat; breakable walls conceal treasure chests and memory containers. A world map of each planet shows you points of interest and fast travel points, but just roaming around and discovering secrets and side quests naturally is one of the game's most enjoyable aspects.

Mario + Rabbids Sparks of Hope takes the fantastic canvas that was Kingdom Battle and paints a masterpiece on it. The combat is as fun as it is strategic, and each world is a delight to roam through. The added freedom in terms of movement during battles and the light RPG elements pair exquisitely with the slapstick Rabbid humor and the whimsical music composed by industry titans Kirkhope, Shimomura, and Coker. The story serves its purpose well enough, even if the ending is a bit lackluster, but the gameplay is unassailable. If you liked its predecessor, you'll love Sparks of Hope. It sets a new bar for Mario-themed spinoffs, and I'm full of hope that the series doesn't end here.