Justin is back again to review more sugar-laden Nintendo goods. 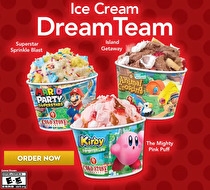 Nintendo has teamed up with Cold Stone Creamery for the third time and have added some non-Mario items to the mix. New this time include creations based on Kirby and Animal Crossing. As soon as I had heard about the promotion I planned to track them down even though I was still recovering from the recent Kirby X Kung Fu Tea promotion. Nintendo World Report needs snack coverage after all.

Of course, finding items like this is always a journey, and there is always a problem I run into. The first Cold Stone I went to seemed sad and broken down. One of their two freezers were busted, they were out of crucial ingredients like strawberries and bananas, the bathroom was out of order, and the manager was very nasty. To make matters worse, they only had two of the three promotional ice cream cups! When I explained I couldn’t accept substitute ingredients because I’m reviewing these items for a very prestigious news outlet they didn’t understand.

I did purchase the Mario Party Superstars themed Superstar Sprinkle Blast. Superstar Sprinkle Blast includes Cake Batter Ice Cream, Yellow Cake, Blue Frosting, and Rainbow Sprinkles. In short, it’s very good, but almost an exact rebranding of Mario’s Super Birthday Blast from 2020. The main difference is the sprinkles are now of the rainbow variety instead of star shaped. When I reviewed it last time the store actually didn’t have star sprinkles, so this item is exactly what I had previously. Even though it’s a returning item, Superstar Sprinkle Blast is delicious and the cake bits really stand out. It stores well in a home freezer tasting just as good later on. If you want more details you can check out my previous review here! 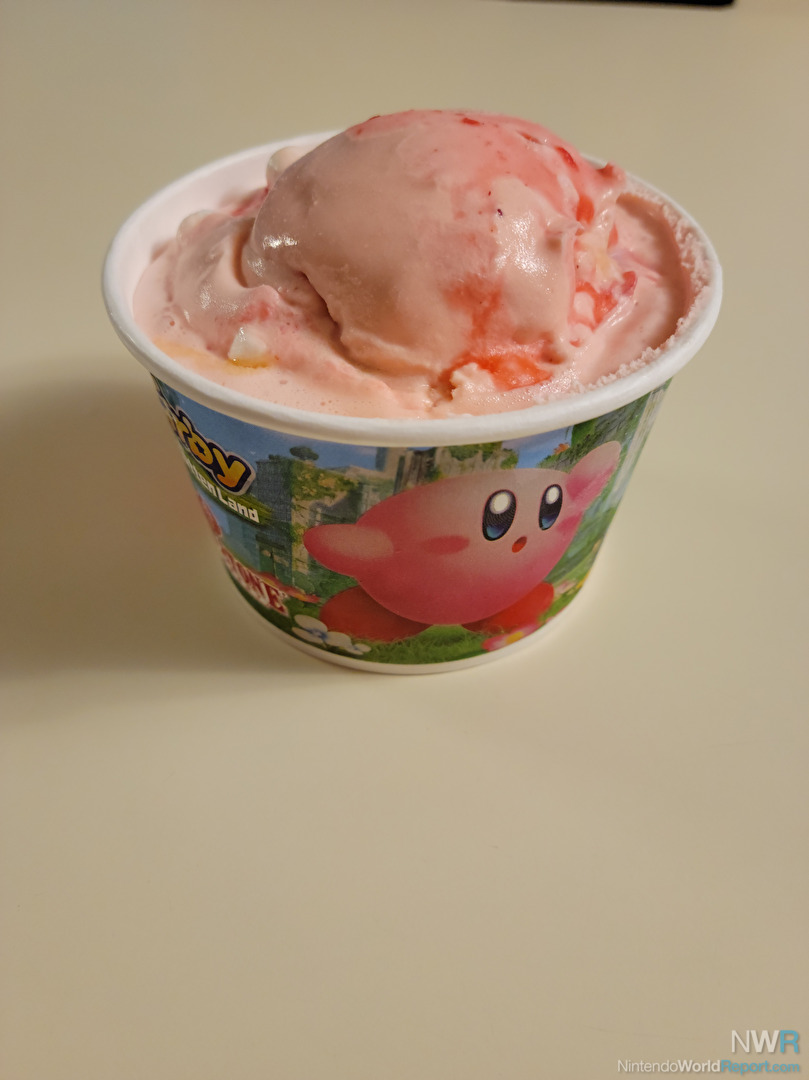 So my hunt for the two new items and the lone remaining promotional cup continued into the next day. I went to a second Cold Stone Creamery and ran into an extremely nice manger. This location seemed on top of everything. They had the ingredients, the three cups, two freezers full of Mario cakes, and other items. I ordered the two new creations, left the store a nice tip, rushed home, dropped the precious treats in the freezer, and got ready to try them later.

First up was a Kirby and the Forgotten Land branded creation called The Mighty Pink Puff. This includes Strawberry Ice Cream, Strawberries, Mini Marshmallows, and Caramel. I really enjoyed the strawberry flavor, and as a marshmallow fan I was delighted. I think it would work a bit better if the marshmallows were somehow just goop and not actual small marshmallows, but it still tastes great. The issue for me was the strawberries had frozen in my freezer, so they were a bit harder to eat and dig out, becoming a little frosty. This one may be better fresh.. as I didn’t even notice the caramel. Still, this item was delicious and gets a thumbs up from me. 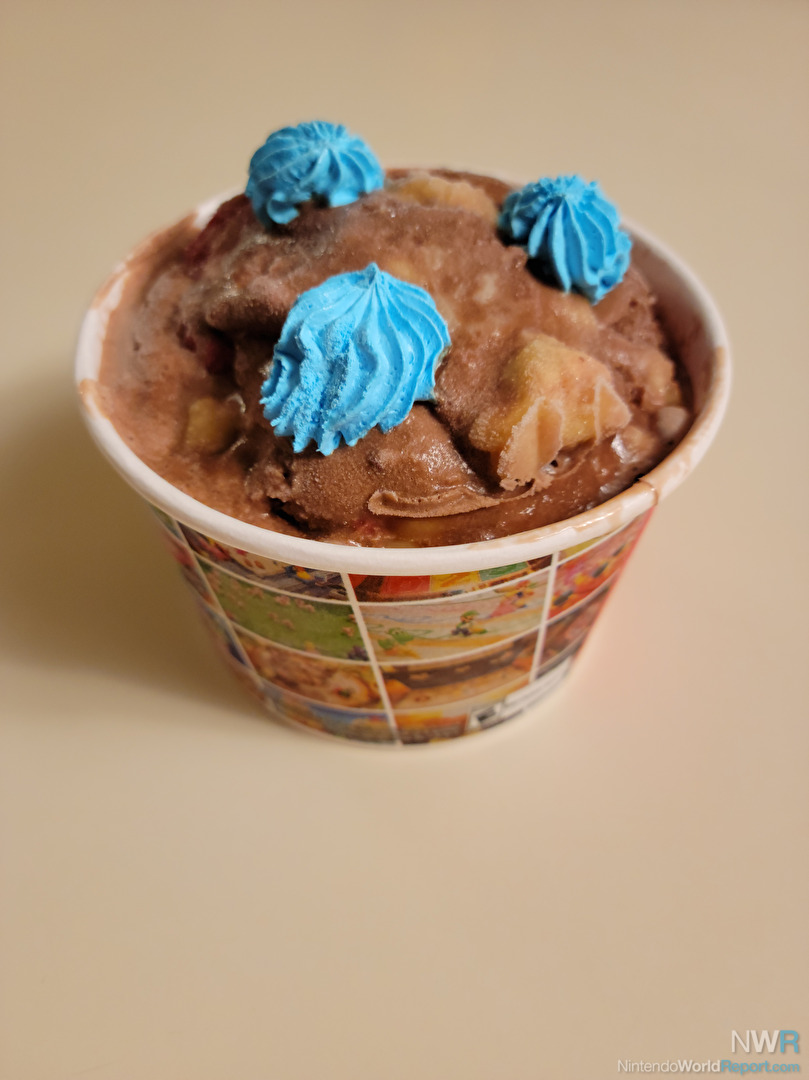 Now finally we come to the Animal Crossing: New Horizons themed Island Getaway creation. It has Chocolate Ice Cream, Strawberries, Bananas, and a Whipped Topping. The only difference between mine and the advertised product is that the Whipped Topping I got was blue and not white, but it still tasted good. The chocolate ice cream is as expected but, like with the Kirby creation, my strawberries and bananas were more solid than probably intended thanks to my at home freezing. While tasting I noticed the banana flavor really spreads to most of the rest of the dish, so be prepared. I do think this one, while having two fruits, is still lacking something to make it stick out even more like the other two choices. Still, it was an enjoyable distraction from the misery of everyday life, and I also recommend it.

If I were to rank the three signature dishes I’d probably put them in order: Superstar Sprinkle Blast, The Mighty Pink Puff, and then Island Getaway. They are all good and I'm sure everyone will have their own favorite. If you’re trying to hunt them down though do call the store in advance as each location seems randomly run. As for me, I’ll be happily looking at my three unused promotional cardboard ice cream dishes until I turn to dust. 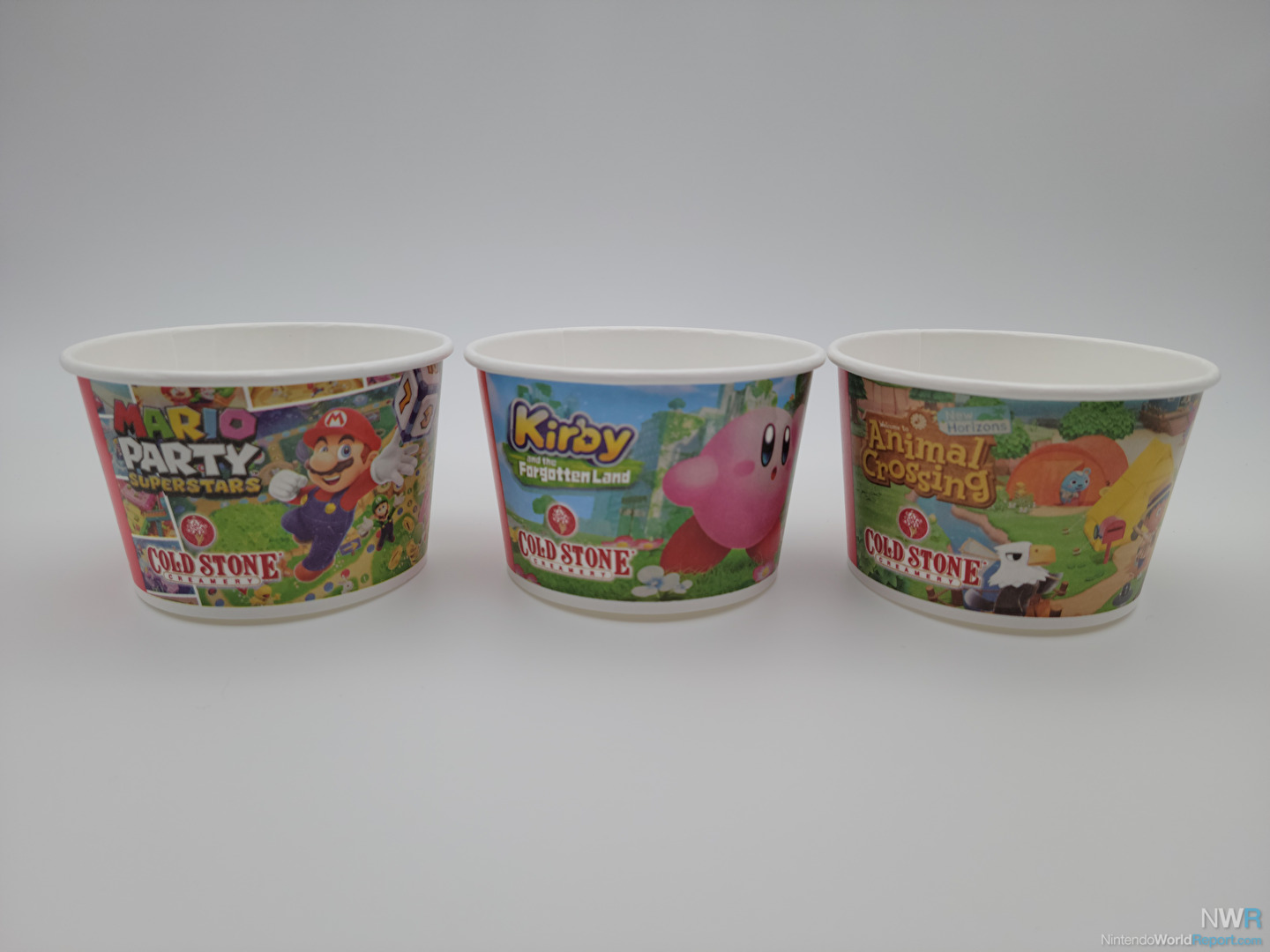 I really wish I could try these