Justin enters his own Mouthful Mode in order to review a Kirby culinary delight. 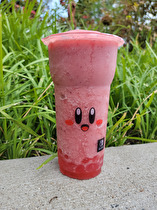 Last March, Kung Fu Tea announced their partnership with Nintendo to help promote Kirby and the Forgotten Land. This promotion included a sweepstakes for prizes, as well as a new Kirby themed drink to be released July 1st. Yes, we had to wait over three months for the true promo item to hit, well after the release of the game it’s promoting, but I didn’t forget and I managed to hunt it down.

The hunt for Kirby’s Fruity Flurry, as the beverage is known, wasn’t very easy. For starters, there aren’t many Kung Fu Tea locations in my area. Secondly, I had to call several to even find it. The first location I tried sold out only a few days after release, or so I was told. The second kept telling me it would be there the next day, for several days. However, they eventually received their supply and I immediately headed over there.

I ordered Kirby’s Fruity Flurry and left a nice tip to make up for the several times a day I had to annoy these employees about a dumb promotional product. Regardless, the prize was in my hand: A cheap plastic cup resembling Kirby turning into a bubble tea, sorta like Mouthful Mode in his latest adventure. Or is it boba? I always heard it was bubble tea until recently when boba seems to have taken over the common vernacular. 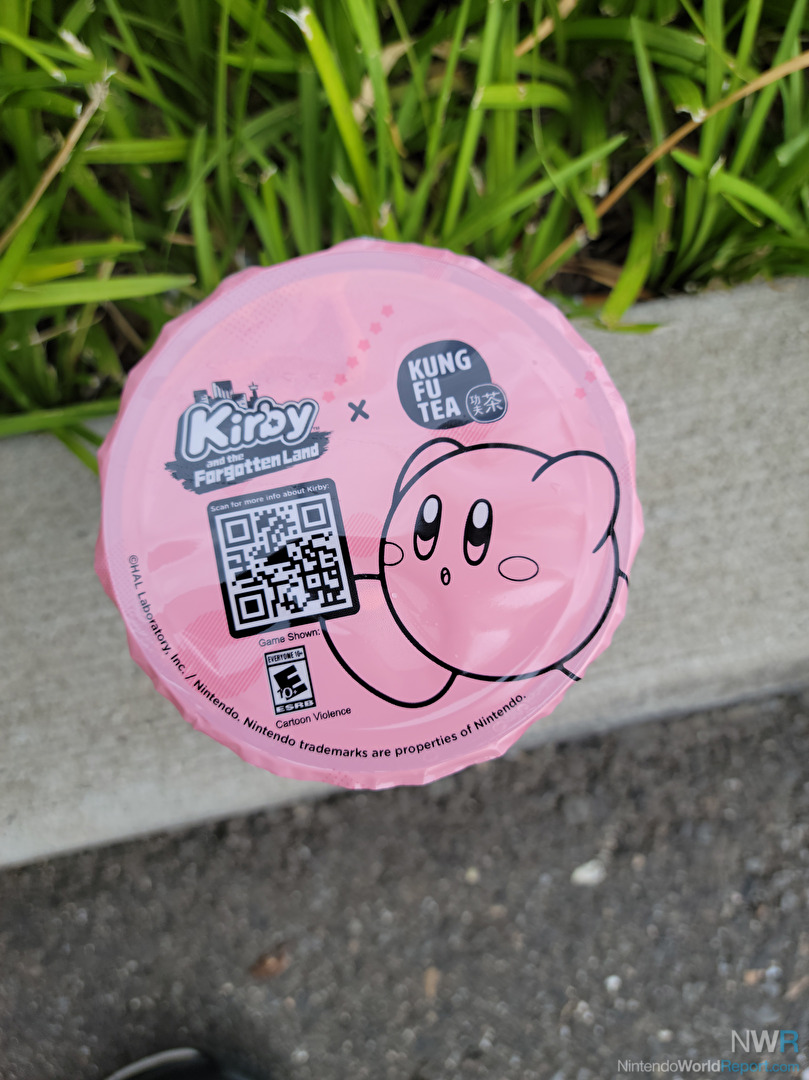 After taking some pictures in the parking lot on a nice day, I was ready to sip Kirby up—Kirby’s Fruity Flurry featuring Berry Crystal Bubble in a cool looking Kirby cup. However, at that moment I was met with a hard choice. You see, Kung Fu Tea applies a thin layer of plastic over the top of the cup. In this case, it was also Kirby themed. I tried to peel back this delicate Nintendo collectible, but it was no use. I was going to have to puncture it with the straw. Even if it’s the standard for most bubble teas, this particular sealing method represents a really sad design for the psycho lunatics who are going to save this trash as a collectors item. Yes, that’s me.

So after stabbing the top of the cup in what seemed to be the safest location, I was ready to indulge in this hard to find beverage. I took my first sip and Wilford Brimley immediately flashed before my eyes. My taste buds were slammed with a sugary sweet berry flavor. If I were to guess, I’d say it was strawberry and raspberry, maybe some others. I can’t be sure. It tasted really good. If the chewy bubble things in this drink were meant to taste like berries, I didn’t notice. I tried to taste a few without my mouth being filled with the thick cold beverage, but they tasted kind of like plain soft gummy bears or something. Maybe it was like those pineapple Haribo ones? Still good, but not nearly as fruity as you might be led to believe.

The further down the cup I sipped, the more regret I became filled with. While it may be tasty, Kirby’s Fruity Flurry may be the most sugary and sweet product I’ve ever consumed. I should have stopped, but I also didn’t want to. I had to review this product for the readers of Nintendo World Report. I kept at it: drinking the concoction and chewing the bubbles. Some of those bubbles were launched to the back of my throat by accident, but I survived. By the end, I was laden with sugar and knew I had made a big mistake. The sugar crash later hit me like a truck. 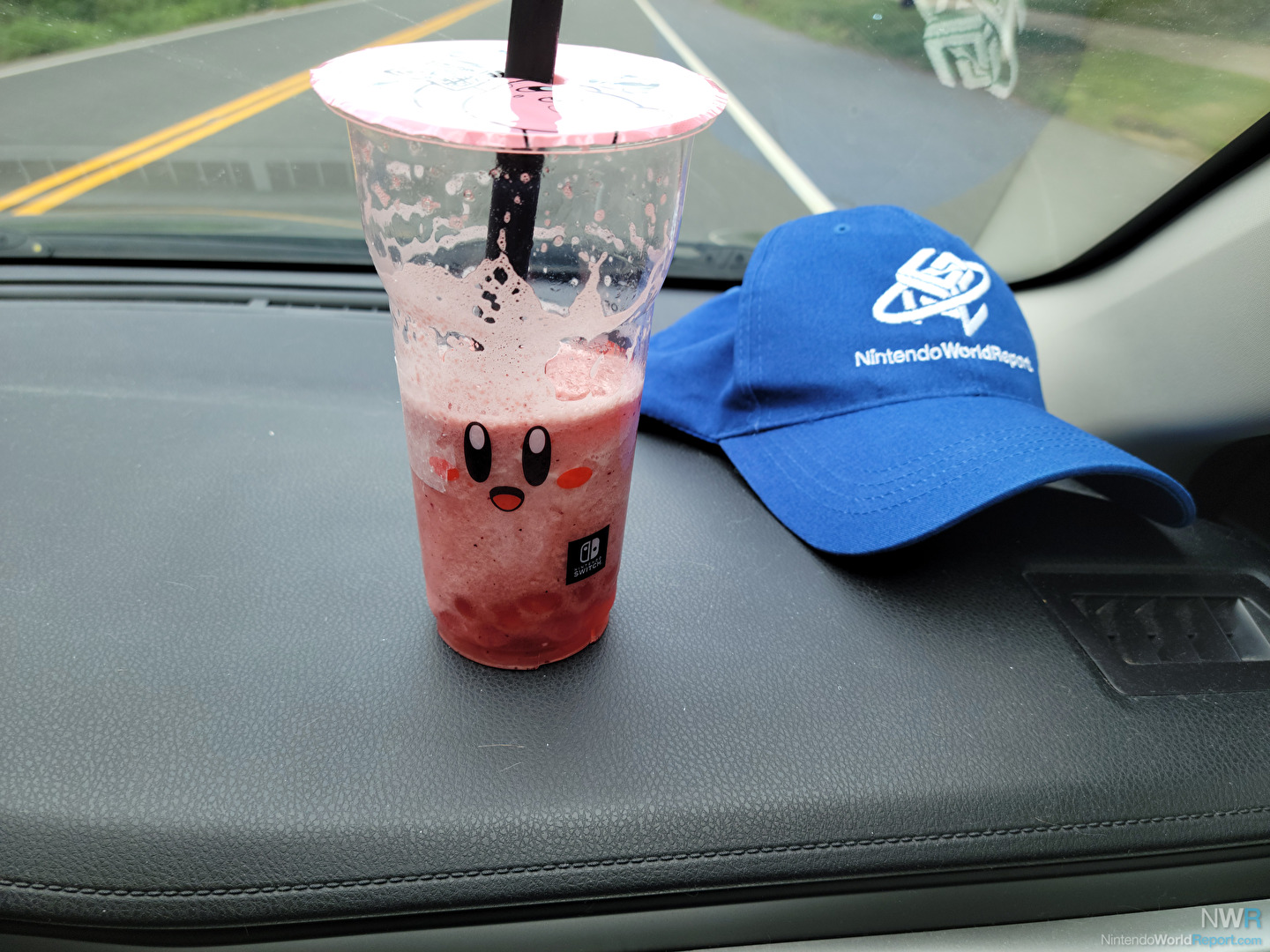 Was it worth risking my health to bring you the tale of Kirby’s Fruity Flurry? I hope so. However, if you decide to track down this promotional beverage, be aware that the portion for this type of slushy fruit drink, which is nothing like tea despite the establishment’s name, may be too much for any reasonable human. Drink at your own risk Kirby fans. As for me, I’m probably just going to drink water and V8 for a week.

I should have stopped, but I also didn’t want to. I had to review this product for the readers of Nintendo World Report. I kept at it: drinking the concoction and chewing the bubbles.

Oh man. Reminds me of the great show Review and the episode in which the host reviews what it is like to eat 50 pancakes.

Berube is NWR's own Forrest MacNeil. Keeping himself at a self-stringent review standard.