Nintendo and Cold Stone Creamery have teamed up to celebrate the 35th anniversary of Super Mario Bros. by offering three treat options for a limited time under the promotional title, “Super Mario Birthday Cake Batter Bash.” This isn’t the first time the two companies have teamed up, having done a similar promotion in 2019. Last year I sampled the two available options and was quite impressed, so I didn’t hesitate to review this year's offerings. The new products include Mario’s Superstar Shake, Mario’s Super Birthday Blast, and Rainbow Road Rally.

First up, I drank Mario’s Superstar Shake. I probably overdid it a bit by getting the largest size, which seemed like a good idea when comparing the prices, but may have destroyed me later on. The shake includes Cake Batter Ice Cream, Bright Blue Frosting, Whipped Topping, and Star Sprinkles. Well, mine didn’t have Star Sprinkles, maybe the store hadn’t received them yet, but I’m sure the regular sprinkles I did have mixed in offer the same taste. 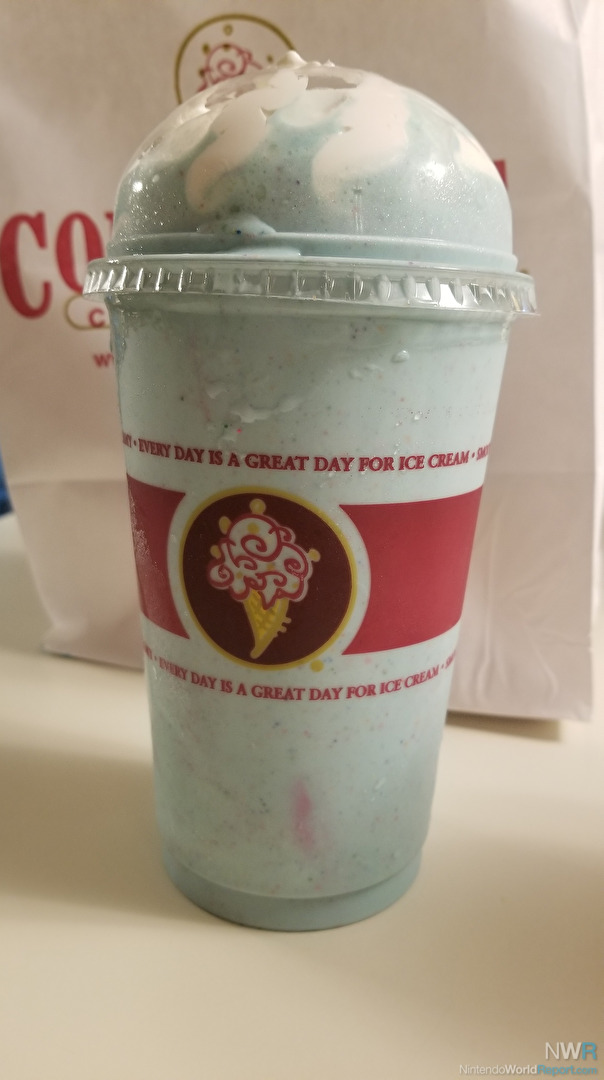 My initial thoughts upon sipping Mario’s Superstar Shake are that it tastes like a delicious piece of birthday cake. This thick drink manages to get through the straw easily enough along with what seems like very tiny bits of cake. The flavor is great and really reminds of eating a liquid version of last year’s Rainbow Sprinkle Road cake.

Mario’s Superstar Shake was very good, and I, scarily, almost drank the entire thing. Consuming this much delicious sugar probably isn’t good and I kind of crashed hard afterwards. As good as it is, please remember to limit yourself. That said, I consume these products to help inform the loyal readers of Nintendo World Report, so I have no regrets.

Mario’s Super Birthday Blast was the next item I tried, which is an ice cream mix consisting of Cake Batter Ice Cream, Yellow Cake, Bright Blue Frosting, and Star Sprinkles. Again, the Star Sprinkles in mine were replaced with sprinkles of the Rainbow variety. This creation tastes really good. I was initially blasted with a birthday cake flavor and the Blue Frosting plus sprinkles really helped mix the texture up in certain spots. The highlight here is easily the actual pieces of delicious yellow cake mixed in. This product also tastes similar to last year’s Rainbow Sprinkle Road cake, even more so than the shake thanks to the amazing yellow cake. This one is a winner and don’t worry, I paced myself eating it over the course of two days. Lesson learned. 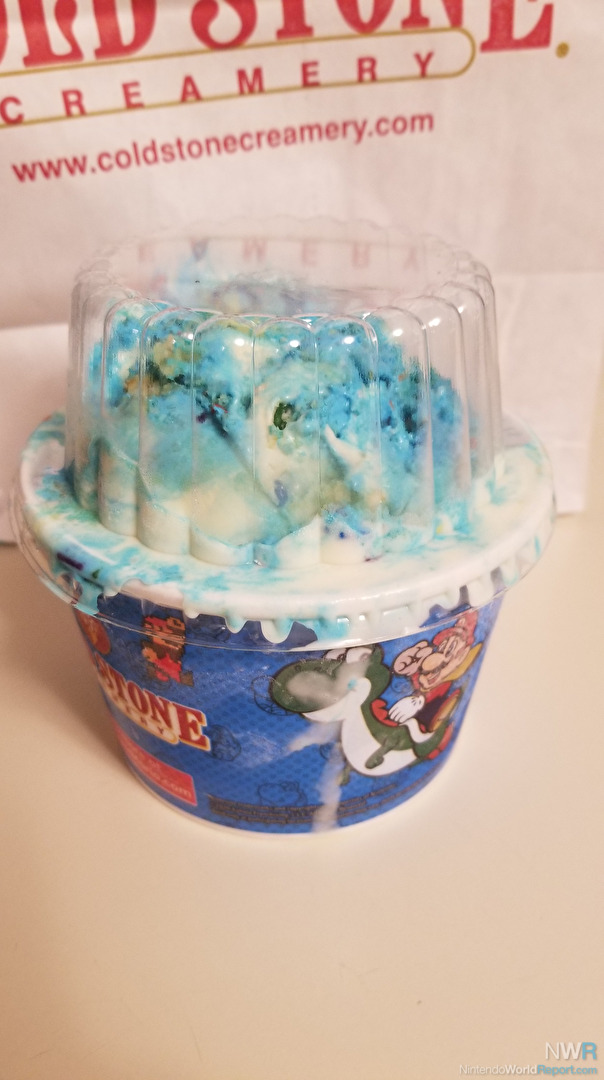 The last desert that’s part of the Super Mario Birthday Cake Batter Bash promotion is the Rainbow Rally Road cake. However, I didn’t purchase this cake because it’s very similar to last year’s Rainbow Sprinkle Road cake with two differences. Last year’s cake used Rainbow Sprinkles and Sweet Cream Ice Cream, the new Rainbow Rally Road cake uses the new Star Sprinkles and Cake Batter Ice Cream. Since my location didn’t receive the Star Sprinkles, and knowing the cake is expensive as is, I decided to skip the cake this year. It’s a very visual piece and without the correct components I’d feel a bit let down after dropping a nice chunk of change. I may try again for the cake in the future, but for now I must point you towards my cake review last year. I wasn’t let down by the similar cake, so I’d be shocked if this year’s creation is a complete flop. 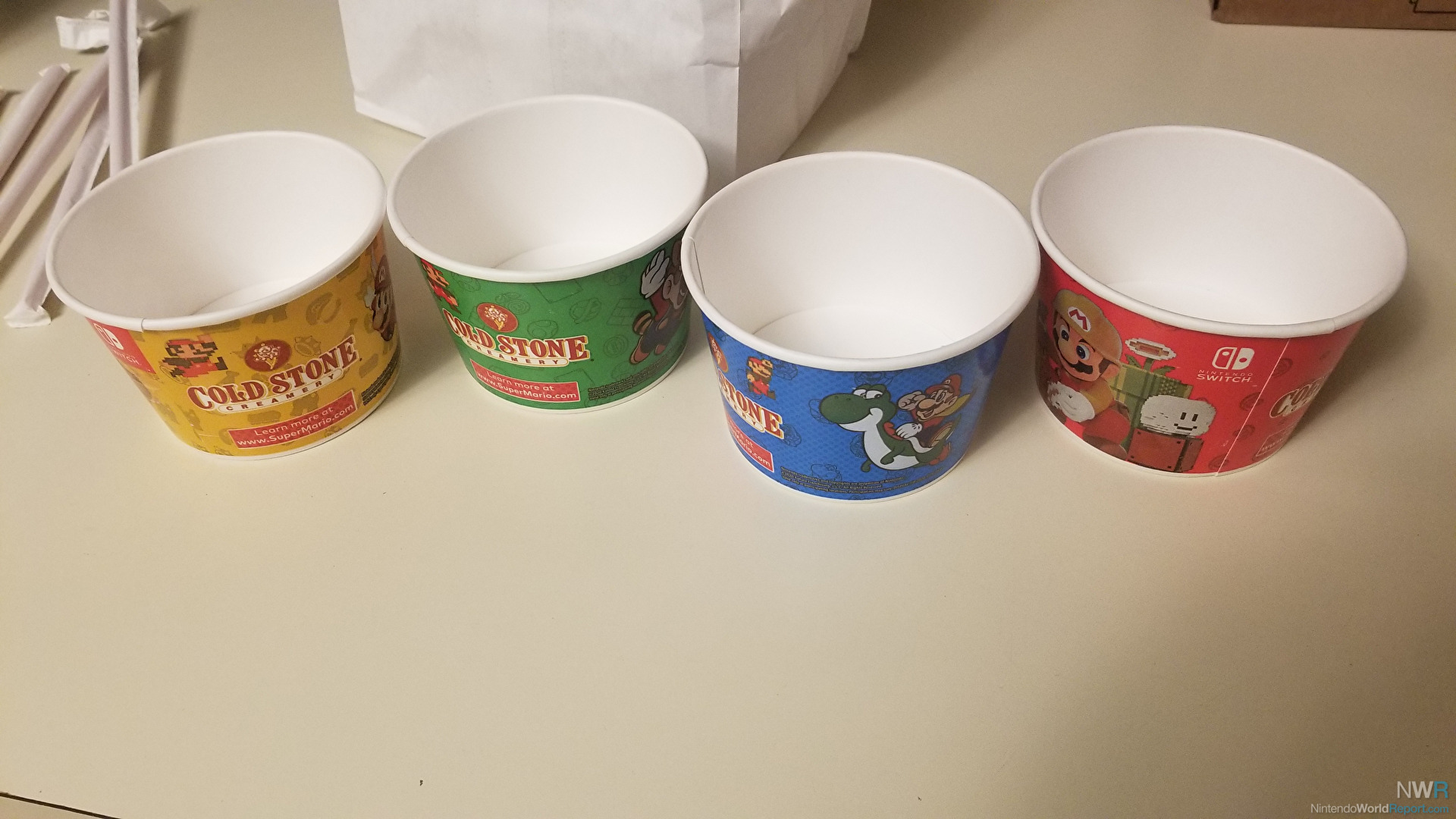 Cold Stone’s promotional program isn’t the best. I think I had to log into three different places to even gain access to my account, which is very confusing. Then, even after making the purchase with my account for the Mario related items, I never received the My Nintendo Coins code. I had to call Cold Stone twice and wait days to get a few e-mail replies before I finally obtained my reward. I’ve heard some people were sent the e-mail with their codes right away, but most people I’ve asked have struggled and had to eventually contact Cold Stone’s poor customer support to obtain their sweet Platinum. In contrast, last year’s promotion gave out scratch cards with My Nintendo Platinum Coins codes on the back. Doing the same this year would have been much better.

Overall, I’d still highly recommend tasting the Mario treats as they are all very tasty. It’s a fun way to celebrate the anniversary of the Super Mario Bros. franchise. Be sure to get all four of those cups if you’re a collector! And if you’re trying to get the Platinum Coins in order to complete the official mission, which may eventually have its own rewards, good luck. You may be in for a small battle.

How do I know whether you liked it or not without a review score?!?


My kids are going to love going to coldstone this week.

Another interesting article from the King Nintendo Fanboy himself! Too bad about the Platinum points debacle. It seems like with many companies, they move things to online whether it makes any sense to or not. Some restaurants are using the virus as an excuse to not hand out menus. Use your phone! Because they're too cheap to either make disposable menus or wipe down the menus after use. :p

Im glad this article exists, I live in the wrong country to ever experience the actual product.

Another interesting article from the King Nintendo Fanboy himself! Too bad about the Platinum points debacle. It seems like with many companies, they move things to online whether it makes any sense to or not. Some restaurants are using the virus as an excuse to not hand out menus. Use your phone! Because they're too cheap to either make disposable menus or wipe down the menus after use. :p

Yeah, and apparently depending on your camera settings you can't read QR codes. We had an awkward experience at a nicer restaurant where my phone would not read QR codes and my wife forgot her phone, so we were forced to guess at the menu (server/restaurant could have been more helpful in this situation, print out some backups or something!)

Took me another day of tinkering to figure out the issue; check your camera settings and make sure flash is disabled and not trying to record motion shots. I had both of those on somehow and turning them off brought back QR scanning.