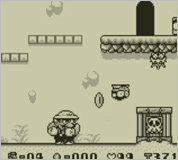 It’s a slow day in terms of software for the eShop, with only one title releasing this week. While Friday holds the promise of the Game Boy Advance Nintendo Ambassador titles arriving in Japan, gamers still have a great title to pick up this week. Here’s what hit the eShop this week:

There is not a whole lot in terms of new video content this week on the eShop. The most notable videos came from Namco Bandai's upcoming SD Gundam G Generation 3D. Included this week is a short, 19 second television commercial as well as a beefy video showcasing the game that clocks in at little over 14 minutes long. The game lets players choose from a multitude of pilots and machines from the Gundam series. With the SD moniker, all of the Gundams are “super deformed,” and are smaller and cuter than their anime counter parts. SD Gundam G Generation 3D is a grid-based strategy role-playing game that is set to release on the 3DS on December 22 in Japan.

Super Mario Land 3: Wario Land (the name is reversed in English speaking regions) on the Game Boy marks the first appearance of Wario as a playable character. At the time, Wario was quite a different personage for Nintendo, as he really isn’t the type to go and rescue princesses or help out people who are under duress. His aims are for monetary gain, as he goes through his adventure trying to get his hands on as much gold as possible.

This is the first time I have had the chance to play the original Wario Land. The game plays quite a bit differently from the first two titles in the Super Mario Land series. Different control mechanics give Wario moves that are more fitting for his character type. While platforming remains a staple of the game, Wario’s ability to knock over most enemies by simply running into them, as well as his dash attack, give the game a different feel and pace. Wario’s speed (or lack thereof) and floaty jumping also help slow the game down so it isn’t nearly as fast-paced as a typical Mario title. The controls still remain top-notch, even with the different pacing.

As of right now, there is no word as to when Wario Land is going to appear outside of Japan. Considering that the game rated by the Australian Classification Board and the popularity of the Super Mario Land titles on the 3DS Virtual Console, you can expect to see this title in your region sometime in the near future.

Yep. That's it for this week. I'm not too disappointed, though. I mean, it's Wario Land AND we got the GBA games this week. Not bad in my book.