Shigeru Miyamoto Speaks: An Interview Between Itoi and Miyamoto from 1999

Miyamoto shares his thoughts on what makes a 3D action game great, provides details about working with Rare and shares a little bit about the 64DD version of Mother 3. 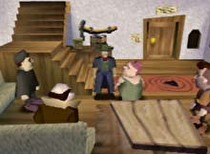 Itoi: What he's thinking now, what he’s thinking about five years from now. And so we've finally come to the last part of our multi part interview with Shigeru Miyamoto. He sure has shared a lot with us. In our last part, he speaks to us about Donkey Kong 64, which launches a month from now in October, as well as “Darling Shigesato Itoi's Mother 3,” scheduled to release next year.

Miyamoto: Donkey Kong 64 is what you would call an old fashioned, standard game of sorts.

To put it simply - it's a 3D action game - for better and for worse. And, I'm going to start with some pretty harsh criticism, but I've been thinking lately - questioning whether 3D action games are actually any fun. I realize there's an irony in me saying that. (Laughs)

I know I'm the one who got everyone excited about them, proclaiming that "Now is the era of 3D action games!" And then everyone thought, "Huh, all right, 3D action then!" and then started making it themselves - only to find out that they're kind of a pain! That, as much work as they are - they aren't all that much more fun, are they? So then they might think, "But, I thought Mario was fun in 3D, right?” So then they try again - only to find out that it wasn't any more fun the second time. (Laughs) Seriously, that's how I feel about them right now. They're hard to make for developers, and there are plenty of people that feel they're pretty hard to play, too. In other words, I think we've reached a period where 3D action games can't get by just because they’re the new thing. Now it's a matter of making sure that there's a central novelty to your gameplay that's actually fun because it works in 3D. 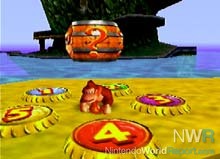 And Rare - they're incredibly good at taking it in the opposite direction. They've functioned on the premise that 3D action games are naturally fun, and have continued to make them, really honing their talent. I think they've really perfected the art.

So with Donkey Kong they've catapulted above what we're (Nintendo) even capable of - it's definitely a “trademarked Rare 3D action game" - you can say that it's really reached its perfect form. I bet you that it turns out to be the absolute best 3D action game available on any hardware - even including Dreamcast. Yeah, that's what I think.

They get that the most important thing is that players have fun as they're playing the game - that so long as they have that everything will be fine. They're really good at reproducing what it is that makes a Nintendo game a Nintendo game, and their directors know what they're doing. I'll go ahead and say it - it's definitely a game that players can enjoy, and they will.

But, you know - it's like I said before - it's a 3D action game for better or worse, so whether or not it can attract new users that haven't had any interest in games up until now - I don't think it can based on looks alone. So, this Donkey Kong 64 will certainly carry its weight for what it is, but as far as whether or not it's going to be the thing to energize the 64 market during this Christmas season - I think people that see what I'm saying will think, “If that's the case, hurry up and put out something newer, fresher.” 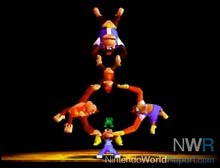 We're making other new software experiences like Talent Studio (Editor's Note: Software only for the 64DD, scheduled for release to Randnet subscribers in February 2000. It's selling point being that you can make drawings and animations of your own that star your own custom “actors”) but as for something really, truly new - that its truly fun to play and includes lots of new ideas - that kind of software isn't ready yet. So from our current lineup I can say that Donkey Kong 64 has been honed, refined and is ready to go - and I can say with confidence that it's THE software that you'll really enjoy this holiday.

I actually visited Rare during this trip that I took to England in September.

Rare is definitely independent now. They're independently developing the games, their teams are independent, they're aware of this and they work with pride - so they don't always listen when an outsider tells them something about their game. (Laughs) Luckily I'm still one of the people they're willing to listen to, so during the trip it was suggested that I go over and tell them what I think.

During these last couple weeks they've been doing their final tuning. Right now we're just starting to share our opinions with them about that. I think it's going to turn out pretty well. At this point it's almost ready to ship, though we've got to put out the ROM within the next month, so things are a little tight. (Laughs) (Editor's Note: This interview was conducted during the end of September.)

Similar to the soon to be released Jet Force Gemini, there aren't a lot of levels in this one. I think that as you get better at making 3D games, it's most fun for the players if you narrow down the number of levels you have, and include multi-layered gameplay and gimmicks - so for both DK64 and Jet Force Gemini, the idea is that the more you play more and more gimmicks reveal themselves. I think they'll be the kind of titles that purchasers will be able to play for a long while. 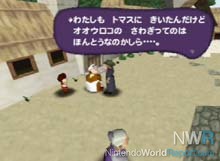 Jet Force Gemini is being made by the team that made Blast Corps. So people who've played Blast Corps will know what to expect - for the first hour or so it's pretty tough, but once you get past that there are all sorts of gameplay gimmicks to enjoy, and if you really want to hone your skill in that game you can spend forever digging into it. I think that's pretty fun. Also, a 3D action game.

Shall I go ahead and say a bit about Mother 3? I might as well - the response at Space World in Makuhari was positive. It's pretty responsive now. I think it's at about 80 percent currently. Once we got these graphics that were completed a while ago in, tuned it and played it with our own hands I got the feeling that this is different from what we'd make in Kyoto (Nintendo).

That's something we're really appreciative of - ‘cause lately there's this feeling that all these games were made in Kyoto. Even with Rare's output. (Laughs) It's got that scent, you know? (Laughs)

From that point of view, Mother 3 feels pretty fresh, new. I feel like it's more than a role playing game made in 3D. Lately you have two kinds of games more or less - those that have this Super Famicom look, painted in beautiful 2D textures, or those that feel like the latest in computer graphics. You see these types of games and you know they’re modern. But parts of Mother 3 include graphics that are in a different class entirely. I'm looking forward to that one. 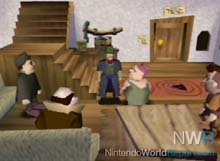 That being the case - I feel like even if Mario RPG and Zelda come out next year, during the same period as Mother 3, that it's not going to feel like there's this kind of overlap. Also, I really hope we get it into a playable state by winter. I look forward to that one. That's the kind of game that just gets better and better the more we put into it, so there's this feeling of "So when do we finally stop and put it out the door?" I'm really looking forward to that one.

Itoi: So, how did you enjoy our six part interview with Shigeru Miyamoto? While listening to him, I really got the feeling that he'll always be able to utilize that skill of finding the new, interesting, mysterious experiences that he is constantly searching for. Miyamoto-san, thank you very much.

I'd love to meet Miyamoto and spend a day with him.  The guy seems genuinely happy and sees things in everyday life that others don't.  The guy saved Nintendo with Donkey Kong and then created the Nintendo empire with Mario/Zelda.  The gameplay elements he added during the years are incredible and they are pervasive in almost all the popular games today.


I really like his interviews.  He comes across as a classy guy, who family is important to him.  I love that his creativeness is grounded in fantasy and he chose to focus on items that he could play with his family during his career.  I'm hard on Nintendo for avoiding mature titles and not pushing great hardware, but Miyamoto was never going to to take them to that promised land.  Nintendo was blinded by his visions and chose to ignore the developing game markets.  That said, I'm glad he chose to focus on games that made him happy.  He was truly epic in his gaming approach and his games will forever be hailed among the best ever.

there... are some kinda eerie and telling bits in this interview. You really get into Miyamoto's psyche when he talks about that baseball team, and... also just how different of a company Nintendo is. the quote about Yamauchi disliking anniversaries is especially telling when the past few years have been Nintendo creating constant faux celebrations with things like the Year of Luigi, the 30th anniversary of the Famicom, the Zelda, Mario, and Kirby anniversary celebrations, etc.

We also get a tale of a very strange superstition that had it maybe been say... 2 years later, would have quite possibly created a very frustrating return trip to japan or worse, one of the most tragic and ironic losses of a living legend ever, should there have been a flight delay.

Yeah, this stuff is super interesting and really does show how much the company has changed over the years. The interview style is just super casual, too, which seems to be the kind of thing that Miyamoto likes (there's some more talk about that stuff in the upcoming parts). It's more of a monologue than an interview, really, but still awesome.


I'll be posting the second part in the next few hours! I hope you guys enjoy it!  :D

From what i understand these series of interviews are precursor to Iwata Asks.

Finally read them all in one sit down. Really really interesting stuff there! Thanks for putting all this up.


I wish I had something to add to the discussion though.