I don't know the scientific explanation, but Sparks made it good.

The launch year for the Switch was filled with experiences that would help the console establish unprecedented momentum, which has seen the little hybrid that could reach sales of over 110 million. In addition to library staples like Breath of the Wild, Mario Odyssey, and Mario Kart 8 Deluxe, a bevy of unique titles helped to cement 2017 as an incredible year for Nintendo fans. One primary example was Mario + Rabbids Kingdom Battle, a turn-based tactics game with light exploration and story elements. What made it stand out was the odd pairing of Mario characters with the wacky Rabbids made popular in the Rayman games. The end result was charming, quirky, and well designed, and it's no surprise that after the first game's positive reception we're staring down the barrel of a full-fledged sequel: Sparks of Hope.

Having been invited to a preview event for the game, I had the opportunity to play through the prologue, most of the first world, and a portion of the second world. Mario + Rabbids Kingdom Battle was a game I finished at launch, and even came back to complete the Donkey Kong Adventure DLC. It was and continues to be something I recommend to anyone who picks up a Switch and wants to try or already loves tactics games. Based on the demo, I'm prepared to reveal that Sparks of Hope seems to be an improvement in almost every way.

The prologue and first world help to familiarize new and returning players with the basics, and some interesting changes have taken place since Kingdom Battle, with regards to combat in particular. Gone is the tile and grid-like system of the first game, and in its place is much more free-form movement and action during the player's turn. Within a given space around each of your characters you can roam around, dash into an enemy or enemy group, and spend up to two action points, allowing you to shoot your primary weapon, use an item or equipped Spark, or activate your special ability, such as Peach's shield power that makes her and those around her impervious to damage. The team jump ability makes its return, but it's more action-oriented as you can steer your character as they hover above the ground and gradually float down to a new location. 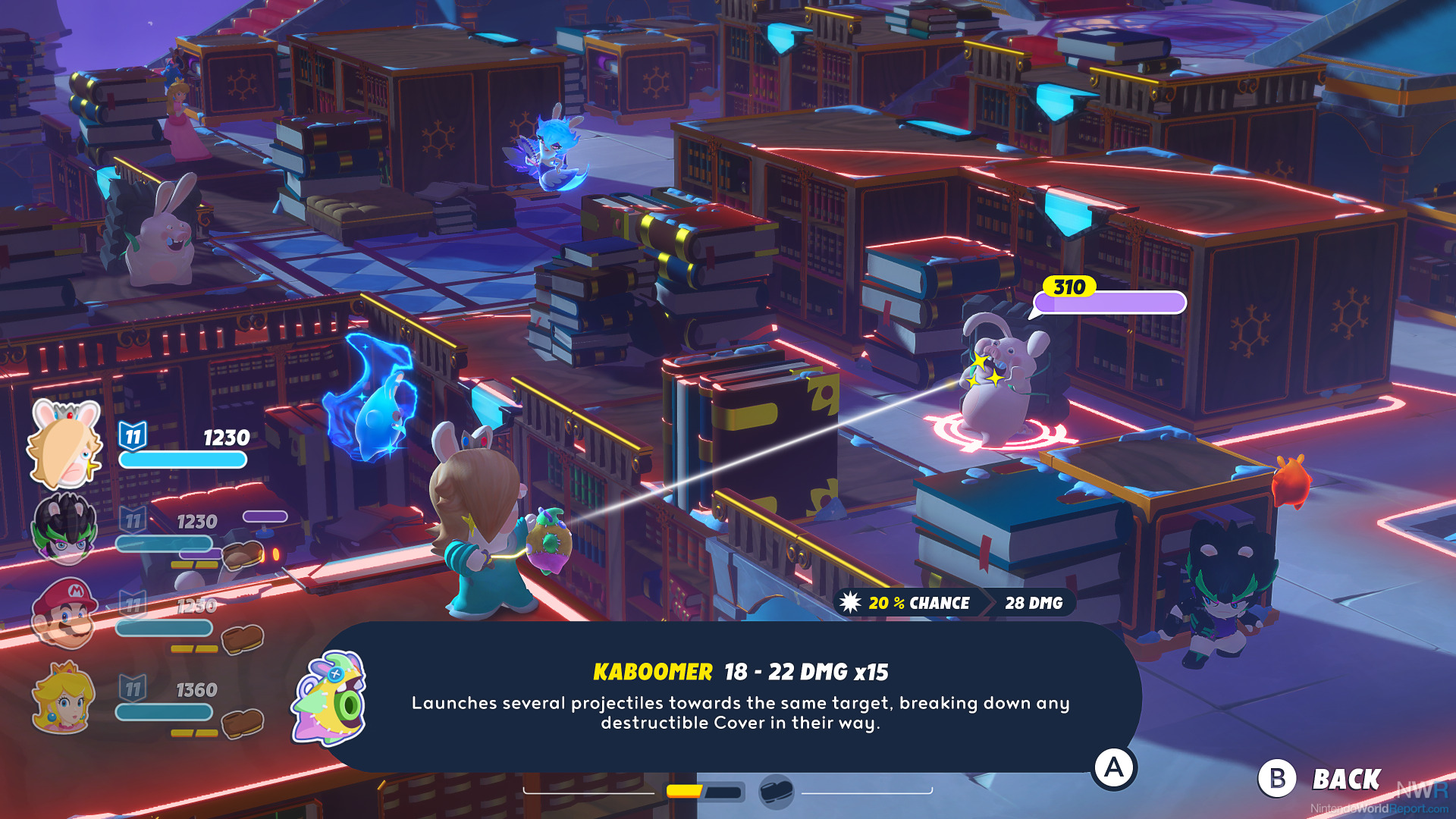 The aforementioned Sparks play a major role in terms of the story and even in combat. In the demo, we needed to rescue a Spark trapped in a temple in order to gain access to a lighthouse that had been taken over by the game's main villain Cursa. Early on, we could equip a single Spark to each character, which would bestow a passive buff, such as fire resistance, and an active ability, which could be turned on with an action point to add lightning damage to your dash or main weapon, for instance. With the use of Star Bits earned from combat and found through exploration, Sparks can be upgraded to make them more potent. By the end of the demo, I was able to equip two different Sparks to each of my heroes, making for some fascinating mixing and matching.

The second world of the game, which we came into using a save file about halfway through, was filled with snow and a large castle that housed our main objective. After completing a couple side quests outside the wintery palace, I brought my team indoors and had to solve a couple puzzles before gaining access to the innermost chamber. It was there that I encountered the figure whom my companion, Capt. Orion, was attempting to rescue: Rabbid Rosalina. This sleepy, long-eared version of the Mario Galaxy princess brought with her a machine gun like weapon and a helpful special ability, an area-of-effect stasis move to freeze enemies in their tracks. Adding this new power to my team's kit allowed us to make short work of the boss of the area. 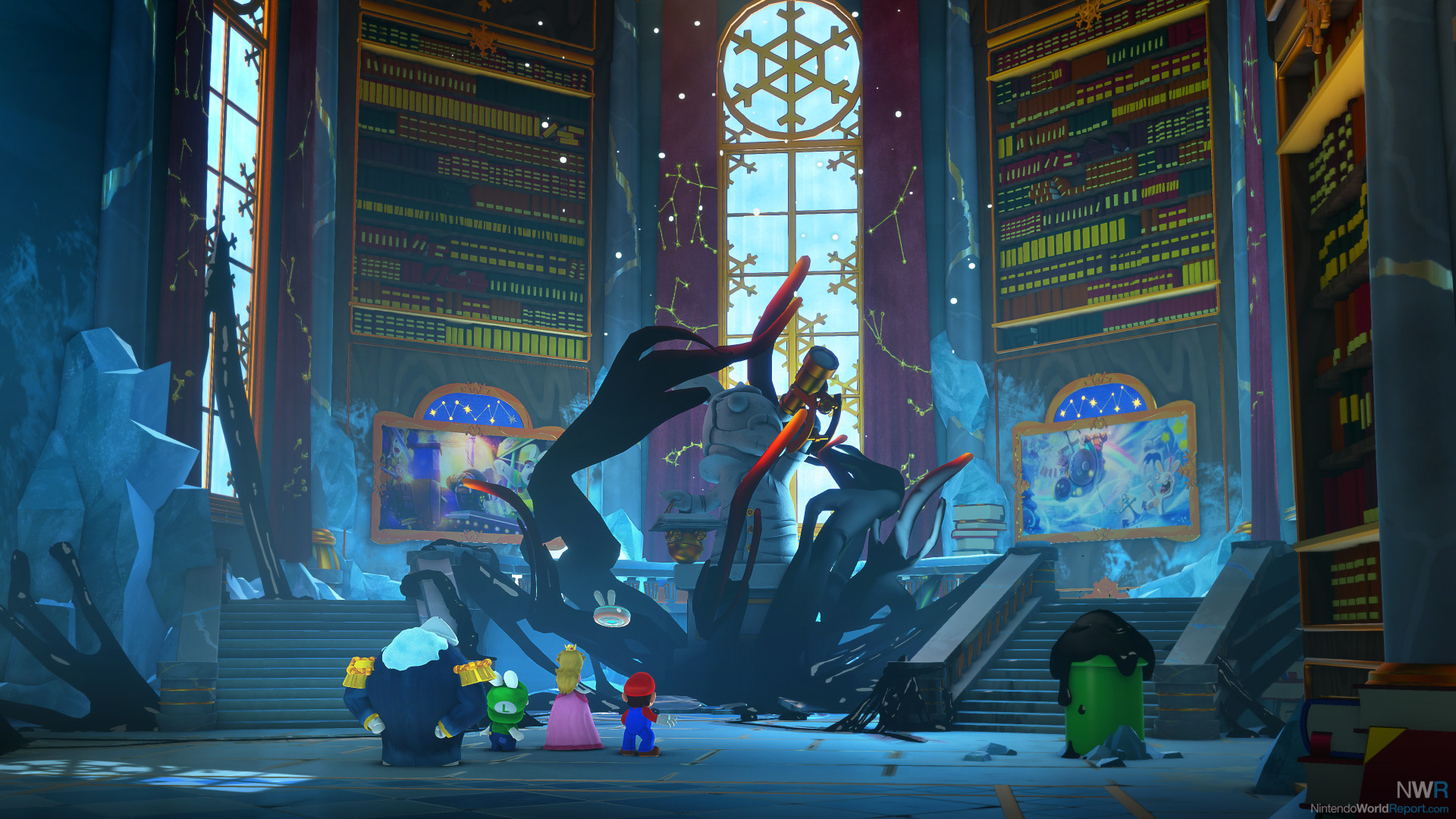 The end of that boss battle is where my only real concern started to become apparent. Sparks of Hope may be a little too easy on its base difficulty setting. Once you get the hang of the game's new features and more robust combat, it's easy to feel like you're just going through the motions as you make your way through smaller skirmishes against Goombas and Bob-ombs. What's fortunate is that there are ways of adjusting the overall challenge the game offers, and so tactics veterans and those familiar with the first Mario + Rabbids title may want to consider upping the difficulty level as soon as the proceedings start to feel a bit breezy.

The openness and level of detail for the two worlds I experienced in the demo stand out as obvious high points. Sparks of Hope gives the impression that there is more to do and see once you’ve accomplished your main objectives on each world. On both worlds I had the ability to purchase a key to unlock a mysterious door, and while I didn't have a chance to see what lay beyond, I was left tantalized by the prospect of more challenging (likely optional) content at the end of each world. I had a glimpse of this on the Beacon Beach world when I clumsily ran into a Goomba who was much higher in level than I was, leading to what seemed an unwinnable scenario for the two members of my party. Nonetheless, exploring every nook and cranny of the different worlds you travel to certainly appears to be a worthwhile endeavor. 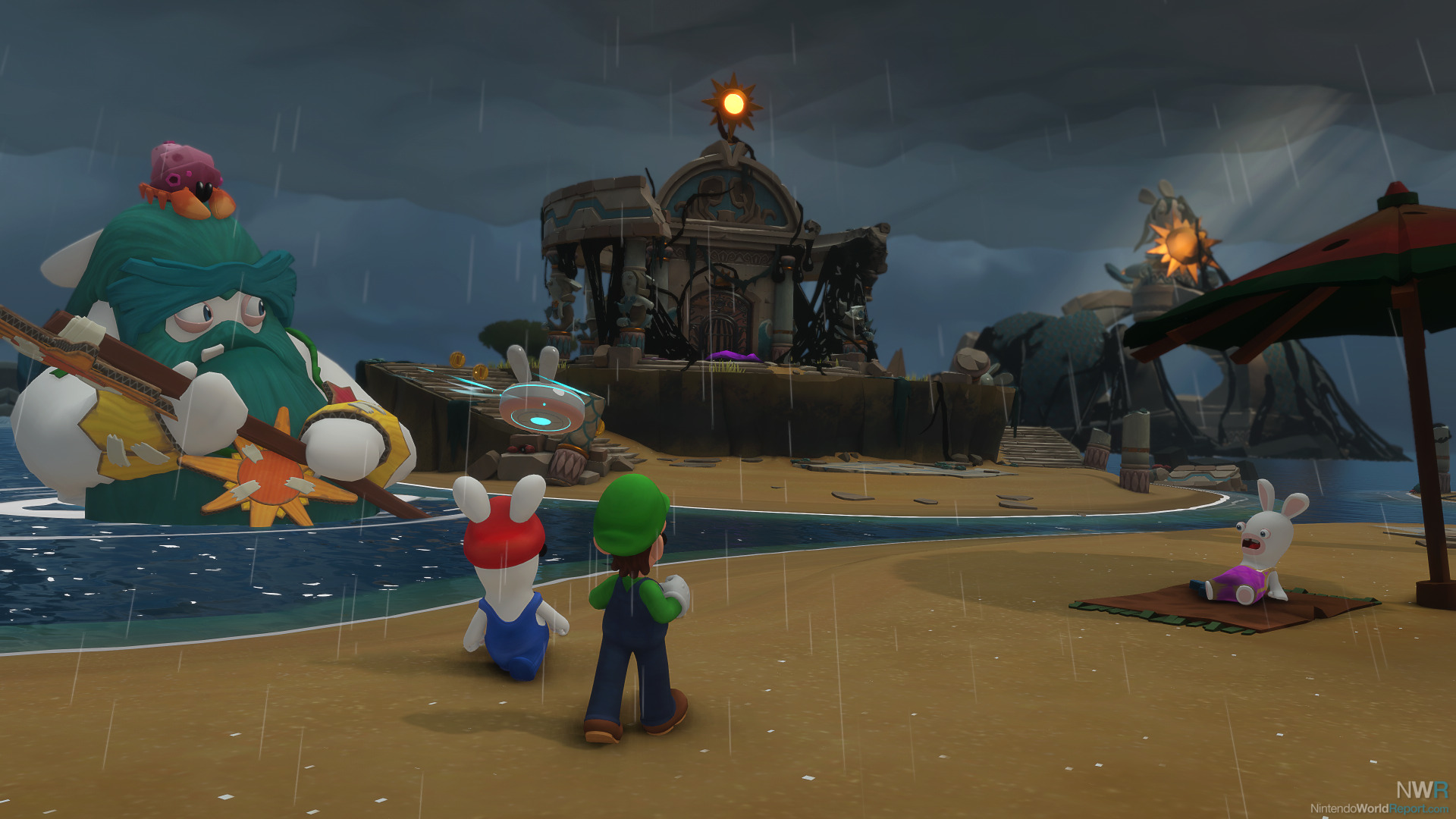 Adding to the charm and character of Sparks of Hope is another upgrade over Kingdom Battle, and this one relates to the in-game audio. Yoko Shimomura (of Super Mario RPG fame) and Gareth Coker (of Ori and the Blind Forest fame) lend their composing talents to the latest Mario + Rabbids game, and there was no shortage of fun and dynamic music as I traipsed across the rainy beach and frozen hills of the demo. What caught my ear just as much was the addition of voice acting, with guide character Beep-O, who returns from Kingdom Battle, sounding eerily like a cartoon version of C-3PO. The dialogue for the Rabbid characters is partially voiced as well, adding a welcome punch to their quirky lines and antics.

Even in a unique setting like that of a private demo event, I was able to ease into Mario + Rabbids Sparks of Hope and lose myself in the familiar but improved gameplay. The worlds I explored here felt deeper and more real, and while some of the battles felt a bit easier than I would like, it's pretty clear there are more intense challenges waiting to be discovered and unlocked. From my three hours with the game, I get the sense that fans of Kingdom Battle will appreciate the way combat has been iterated on, making it more dynamic and setting up the possibility of some absolutely wicked combinations. Fortunately, we won't have to wait long to see if the full game lives up to the potential evident in its opening worlds. Mario + Rabbids Sparks of Hope blasts off again on October 20.