Once more unto the Breach, dear friends!

It’s hard to believe it’s been six long years since Tom Happ gifted the world with Axiom Verge, a game I’ve since played through several times on several different systems. Essentially summarized as Super Metroid by way of Contra with a surprisingly heavy, sci-fi story, Axiom Verge has been living, rent-free, in my brain since its release. It’s not perfect, and the best version is, surprisingly, on Wii U, but if you’ve managed to avoid playing Axiom Verge over the last half decade, you should correct that mistake. Since the sequel was announced in an Indie World Showcase from December 2019, my frothing anticipation has only increased. And now it’s here, and I’ve played it, and it’s wonderful. 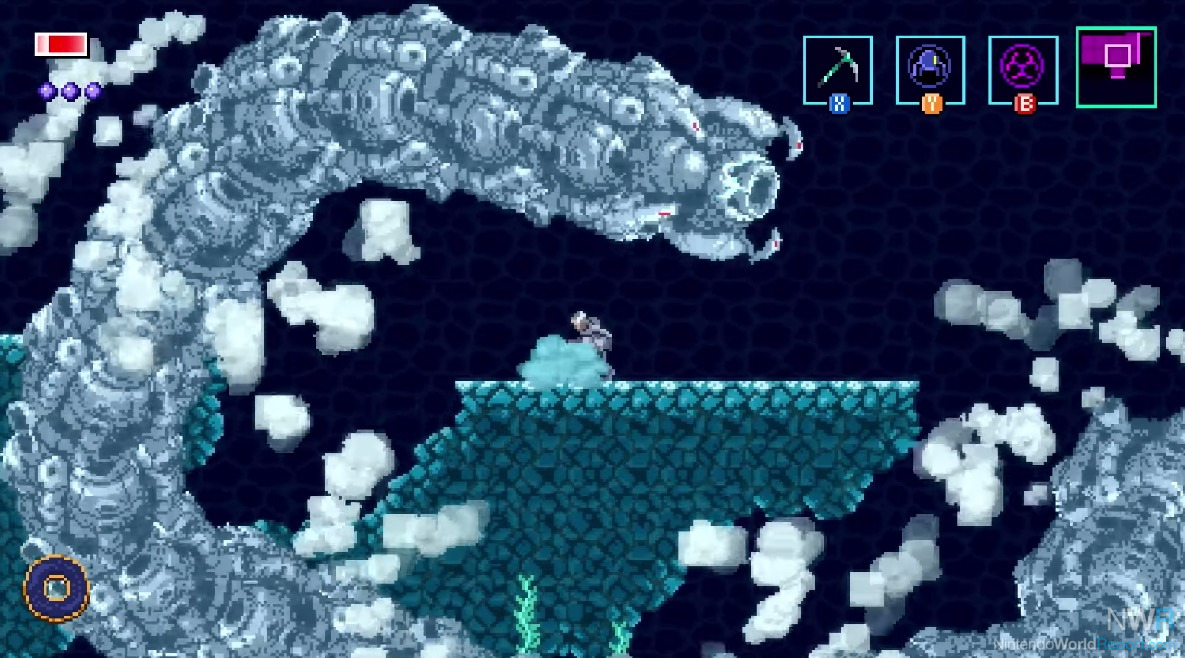 You won’t be controlling Trace in Axiom Verge 2, but instead a woman named Indra who finds herself transported to a parallel version of Earth that’s seemingly been overtaken by machines. The game’s most immediate differentiator is the change in scenery: whereas Axiom Verge 1 took place largely in dark, subterranean caverns, the sequel is content to show you the surface of the planet—a planet that is not, in fact, Sudra. Another big change is that Axiom Verge 2’s focus is not on combat, but exploration. Indra will find a handful of melee weapons and a couple projectile attacks, but nothing compared to the overabundance of imaginative firepower from the previous game. Instead, you’ll quickly be able to grab ledges, climb walls, and perform an impact attack that damages enemies and destroys cracked walls.

In addition to finding a steady stream of ability-increasing items, Indra will also find “Apocalypse Flasks,” which are analogous to skill points. You can customize her abilities using these vials for increased damage, health, and hacking potential. Once Indra finds a drone, it receives its own line of upgrades. As in Axiom Verge 1, Indra will also come across health upgrades here and there. 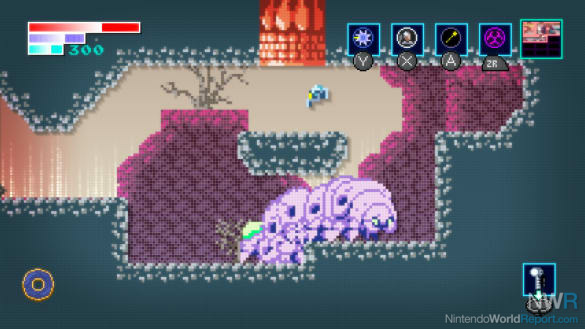 There was plenty of drone gameplay in Axiom Verge 1, especially once Trace gained the ability to warp to the drone’s location. In this sequel, the drone is essentially Indra’s co-star, as it can—and must—travel to an alternate map that runs parallel to the main map called the Breach. Oh yes, the Breach—the abstract storm between worlds that kept the Rusalki from killing Athetos in Axiom Verge 1—is now traversable. The Breach plays like an entirely different game, as the drone has its own suite of abilities (including a grappling hook) and the level design is tighter and more compact. The Breach has a unique aesthetic that I really enjoyed, complete with catchy chiptunes (the whole game has great music).

Most of the game’s upgrades have to do with exploration, drone abilities, or Breach exploration. I also haven’t touched on another key aspect of Axiom Verge 2—hacking. The first game presented players with the Address Disrupter, which pixelated enemies in order to change their behavior. Here, Indra can “infect” any mechanical object, mobile or otherwise, and have direct control over its subroutines. As you sink skills points into your infection ability, your powers grow. Indra can cause platforms to move, doors to open, or enemies to work for her. Many larger enemies have multiple parts to infect, and at higher levels you can effectively cripple your foes. The drone can also infect, which adds another layer to combat.

Indra won’t come across any traditional boss fights, but there are plenty of larger mechanical monsters to defeat, and doing so provides Apocalypse Flasks. These fights can be tense if you’re not well prepared, but upgrading your infection abilities makes them considerably easier.

You may be wondering about the sequel’s story. There’s not much I can say without edging into spoiler territory, but it does eventually link to the plot of Axiom Verge 1—just not in the way I expected. While I really enjoyed the connection to Axiom Verge 1 and the parallel story of what’s going on in this alternate Earth that Indra’s exploring, I found Indra herself to be underdeveloped. Part of it is because there’s not as much dialogue in Axiom Verge 2, but another part is that I miss the character portraits of Axiom Verge 1, where I could really get a good idea of what Trace looked like, and his expressions during story segments. In Axiom Verge 2, characters speak using word balloons and character portraits are passé. As a result, I didn’t feel as connected to Indra as I did to Trace.

The game is gorgeous, with big outdoor environments and lively backgrounds. It’s one gigantic map now rather than being subdivided into distinct areas as in the last game. Before too long, Indra gains the ability to warp between save points, which is something I asked for specifically in my Wii U review, and I’m thrilled it’s been implemented here. Wayfinding and item cleanup is still something of a bear, however: the map doesn’t mark where items are or what has already been found. You do have a “reminder” mark for the map, and I recommend using it. Among the very first things Indra finds is a compass, but I did not find it particularly helpful. It will point you toward waypoints (which you tend to get through dialogue) but it will often point you towards things you can’t get to for a long time.

My only other real complaints about the game has to do with Breach-jumping. To get in and out of certain areas of the game, you’ll have to pay a good amount of attention to the structure of the Breach vs. whatever area Indra is in. In some cases, you’ll have to manipulate Breach portals. This led to a lot frustration later in the game once I knew where I had to go but couldn’t figure out how to get there. I’ll just say this—when in doubt, use the Breach Attractor. There are still a few Apocalypse Flasks that I’ve no idea how to obtain, but I’m sure the Internet will have a guide up in no time.

Axiom Verge 2 is a fantastic evolution of Axiom Verge 1—it feels like a different game, but with enough gameplay and story connections to remain familiar. My issues with the protagonist and wayfinding pale in comparison to the addictive exploration and beautiful vistas that Axiom Verge 2 revels in, and I can’t wait to speculate wildly about the storyline.

Wow. Shadowdropped but already reviewed. Everyone's getting on the secrecy bandwagon after the Switch 2 before E3 predictions.

I really loved Axiom Verge when it came out, but now I don't remember the plot at all. I have some vague ideas. I'd probably have to replay the original before going to 2. 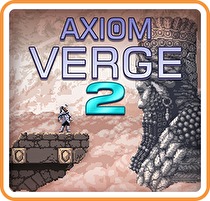