A scratch golfer in some ways, but the lack of polish and content pushes it out of bounds.

Mario and his pals somehow find the time in between their normal adventures for a wide variety of sports and competitions. Mario Golf: Super Rush marks the latest in the series that formally debuted on the Nintendo 64, and it attempts to straddle the line between offering a robust single-player campaign and a smattering of multiplayer options. Ditching familiar swing and strike mechanics make for a puzzling twist, and the lack of overall content is very hard to ignore. Even though the online experience can be another tee shot rolled into the middle of a bunker, the retooled RPG mode of Golf Adventure is fun while it lasts. So how many fairways does Super Rush actually manage to hit?

From the start menu, players can select from three different play options in addition to Golf Guide, which offers tips and instructions. Solo Experience allows you to compete against yourself in stroke play to shoot for the lowest score, or timed play to see how quickly you can get through a given course. Golf Adventure is this game’s single-player RPG, and it takes you through the six total courses (mountains, desert, rainswept, etc.) with a light through narrative, side challenges, and a few boss encounters. While certainly distinct from the RPG modes of Mario Golf on GBC and GBA, it manages to stay engaging for a good eight or so hours until the credits roll. The Play Golf option is where you can set up local wireless matches and join or make online lobbies. There are some decent customization options in terms of creating shorter rounds of maybe three or six holes, turning off special shots, and starting on a designated hole within each course.

Even if there isn’t a shortage of ways to play, the additions of Speed Golf and Battle Golf might actually cancel each other out. With four players (its max number), Battle Golf is a neat and compelling mini-golf-like experience. In an oval-shaped arena, nine holes are up for grabs and the first player to sink a ball in one wins that flag, with three flags needed for victory. Items, super shots, and other hazards (like items raining down from above with Super Rush) can be the difference between winning and losing, and the hectic and quick-paced nature of Battle Golf make it a standout feature. Speed Golf, on the other hand, is an interesting gimmick that begins to wear thin after a few rounds. It involves running to your ball, potentially knocking out other players along the way, watching your stamina meter, and finishing the hole as fast as possible. In Golf Adventure, this form of play is pretty miserable and actually slower than just playing a standard round since you aren’t just focusing on the shots you’re taking. In multiplayer, the shine wears off almost immediately, but younger players may get more mileage from it. 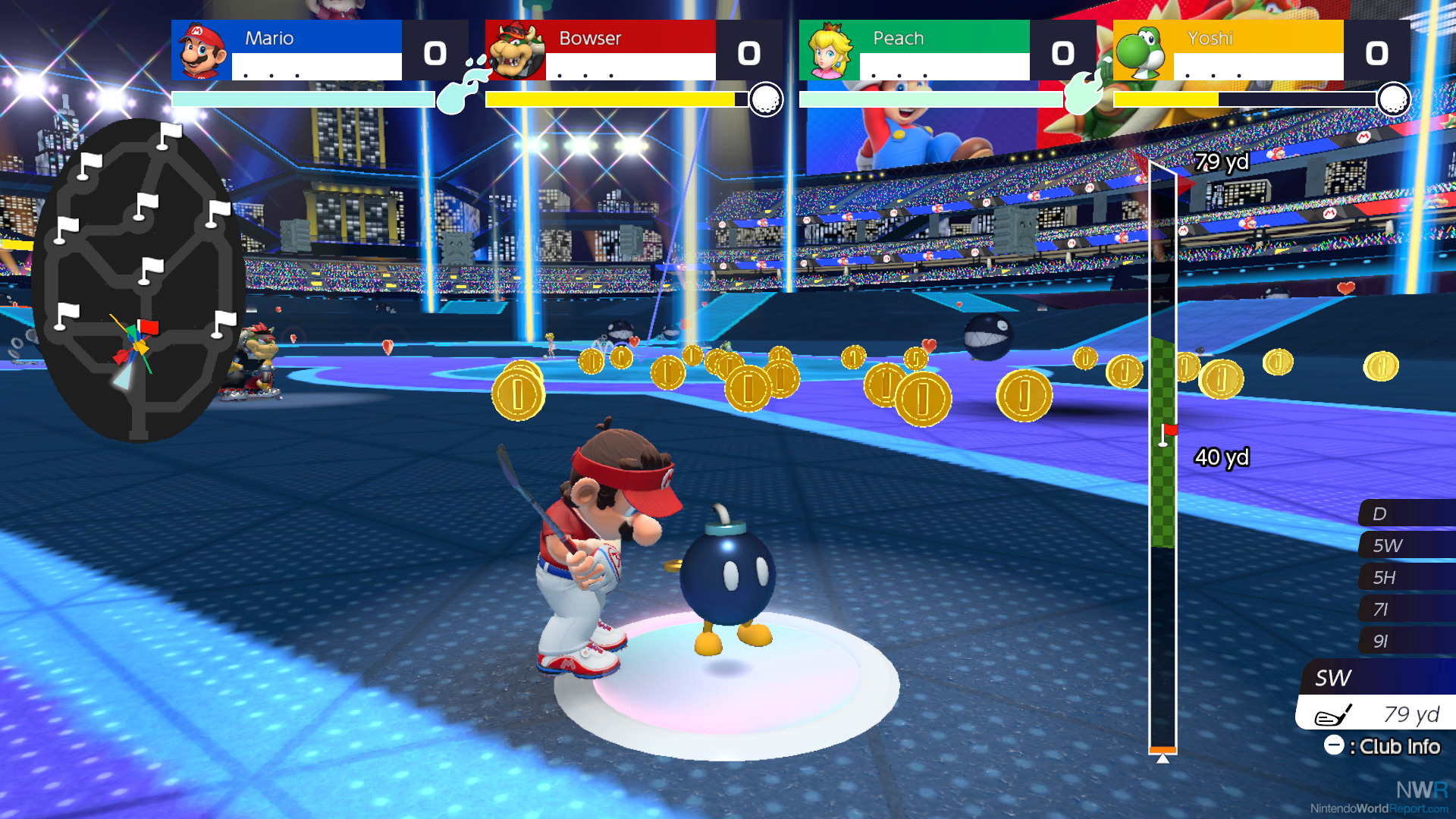 Returning to Golf Adventure, we actually posted a fairly in-depth feature on it already, so I’ll just touch on a few key takeaways. It very much feels like Nintendo is trying to appeal to a younger demographic with it, while also throwing in enough that should appease longtime fans hoping for a return to RPG glory. Leveling up and choosing which stats to boost feels satisfying, and the benefits are noticeable. The mini-game challenges teach and hone more minor areas of the game. Ultimately, though, a lot of what is introduced is quickly left behind. New techniques are practiced and then used once. Characters you seem poised to bond and interact with throughout your rise from rookie to pro are discarded, some quite early on. NPCs have some funny dialogue, but most just mention the current state of the area you find them in. Is there really a need for three different Shy Guys to tell me the local course is temporarily shut down? The story is simple and accessible, with a few boss fights adding welcome variety, but the six total courses seem a meager offering at launch; even Mario Golf 64 had eight courses! Yes, we know that more content is coming as verified during Nintendo’s E3 presentation, and what Mario Golf: Super Rush ends up becoming may be a very full and enticing value proposition, but that can’t be said at present.

The actual golf mechanics are very different here, too. Gone is the triple-button press system that has been ubiquitous in video game versions of the sport, where one press starts your swing, a second press sets the power, and a third determines accuracy or direction. It’s been replaced with a simplified system that exchanges skill and timing for randomness and cautious play, and even once you get the hang of it, it’s hard not to wish at least for an option to use the former controls. Now, a single press starts your meter, with a second determining power, but that second press has to try and avoid going for a full power at the top of your swing, lest you risk firing a wild shot through random chance. A perfect blast of a golf swing used to be a matter of timing your presses well; with Super Rush, players are forced to pull back on the throttle, which just seems a baffling choice. Perhaps in service of upping the tempo, curve, ball height, and spin are all determined during the swing now, when before these choices were generally decided upon prior to starting your swing. This is another reason why Speed Golf seems to bring down the pure golf content of the game. 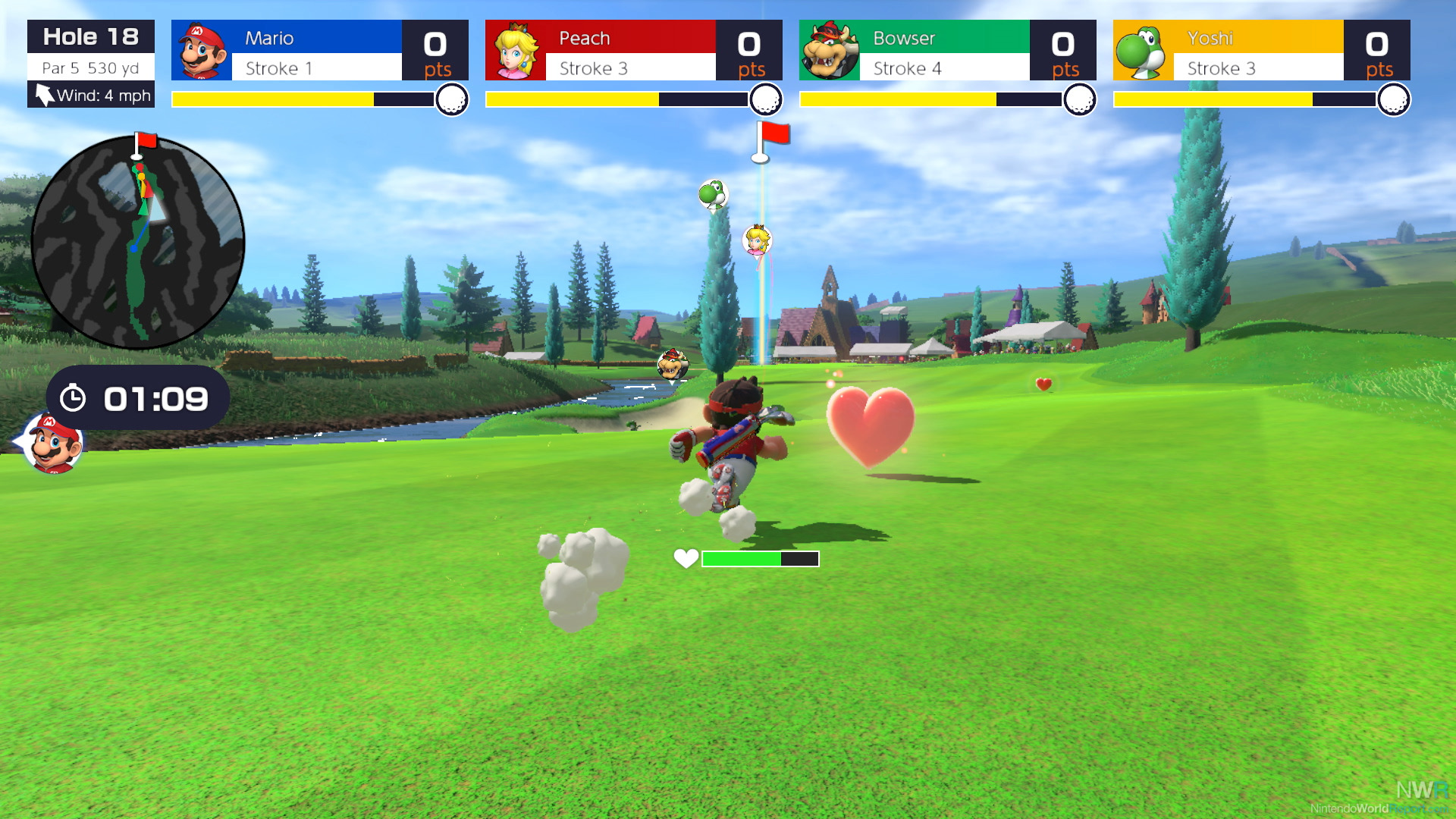 The overall presentation shows off just how unpolished the product really is. If anything, maybe the game’s subtitle should have been “Super Rushed,” because the typically high level of Nintendo sheen simply isn’t present. The courses look fine, but there isn’t much attention to detail. The crowd of Mushroom Kingdom spectators is laughably dull and appear as if they were just plopped onto the side of a particular hole. Even during solo play, camera angles obscure shots or fail to capture dramatic moments and close calls. On the putting green, characters will often be shown in the foreground shooting towards the background, meaning that you can’t always see if your ball is even heading towards the hole. I noticed, even in Golf Adventure, characters flickering between their transparent models and their fully animated ones. I’ll only make one comment about the music and sound: why can’t I taunt the loser until Wario’s throat is sore?

Online play seems like it might be okay, and one of the fortunate things about getting to review the game post rather than pre-launch is that we have a better idea of what the community of Super Rush might look like. Playing with a couple friends, I experienced one major disconnection that ended a session before settling in for just under a dozen short rounds. A bit of lag here and there was the only noticeable issue, but we still had fun with it. By myself, I played with a handful of online groups, usually consisting of four players. Again, even though a bit of lag cropped up from time to time, no further disconnection issues came up after that initial one. Multiplayer will definitely add some life to a game that definitely needs it, but a lack of online leaderboards and rankings is another obvious oversight. A lesser one is that you can’t change game modes online without leaving your created lobby and starting a new one, kicking out any players who may have joined you. I should note that half of my online play was on TV while the rest was portable, and even while docked, I was still relying on a wireless connection. 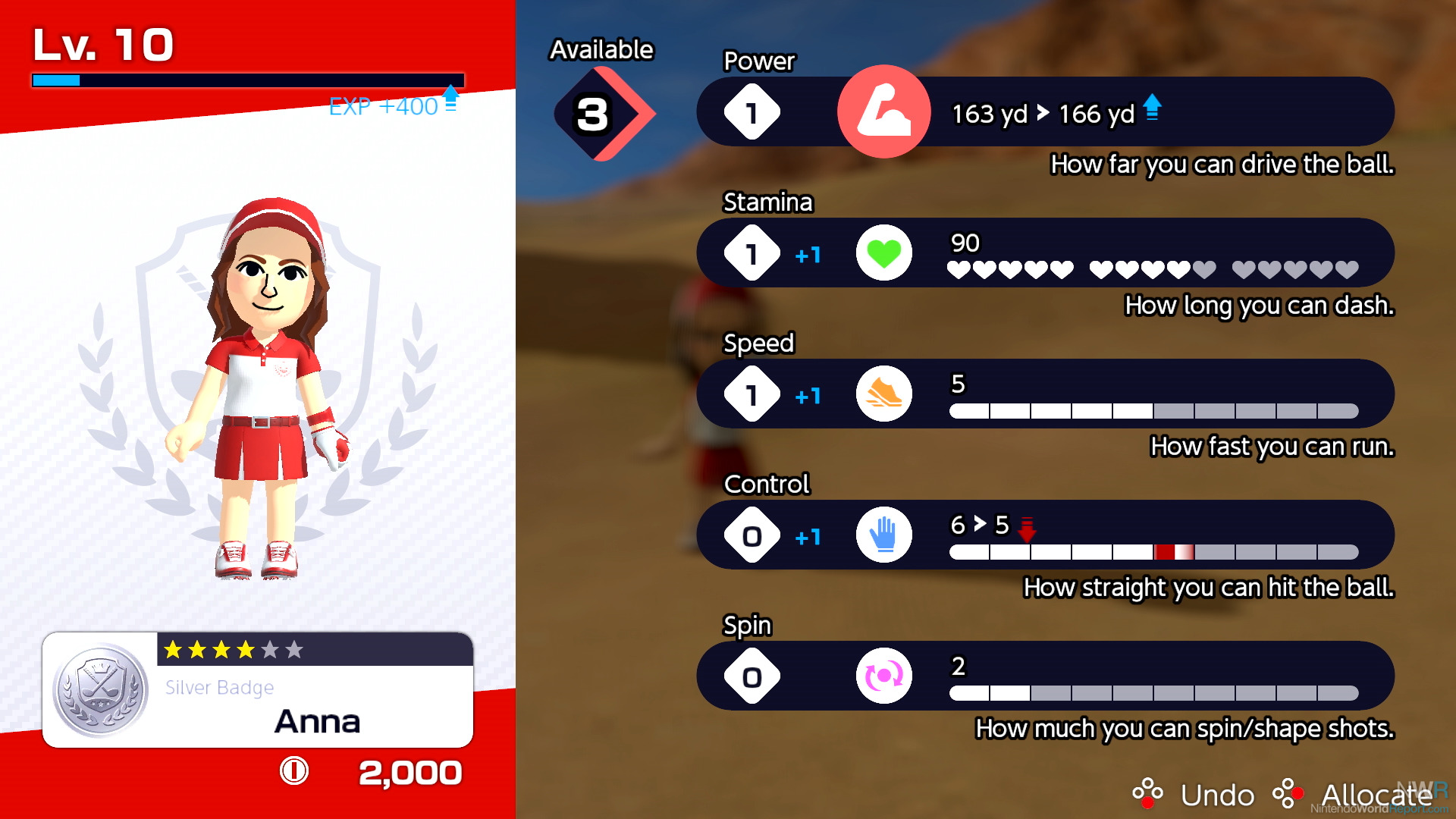 Mario Golf: Super Rush is filled with potential; it’s a decent game that I’m going to enjoy for what it is. That said, I can’t help but lament what could have been. More options, polish, and content would make this the definitive Mario Golf experience. It’s entirely possible that in the next year or two, just like with Mario Tennis Aces, (free) DLC adds not only characters and costumes, but also full courses and maybe even a little something to Golf Adventure. Despite its short-comings, Golf Adventure is a wonderful iteration of past Mario sports RPG modes, and it stands as a definite highlight within a mediocre golf bag of lie-filled scorecards and broken tees. Mario Golf: Super Rush takes years of practice at the driving range and blasts a tee shot into the air, only to see it curve far to the right and into an unsuspecting water hazard. It should have been a culmination of the home and handheld versions of Mario Golf, and instead it largely squanders that potential. Only time will tell if content drops for the game will bring it up to par. For now, you’ll have to play it as it lies.

I definitely am enjoying the game more than this reviewer. I even sat down for a few hours with Mario Golf Toadstool Tour, Mario Golf 64, and Mario Golf World Tour (3DS) for honest comparison. This new iteration is very sterile in the menus and overall presentation, almost skewing more into sim territory. So the Mario charm is really suppressed here.

That said, I actually prefer the new shot system, and the two player split-screen simultaneous play steals the show. Seriously awesome. It’s certainly different from the old versions, but I like many of the changes. As a longtime fan of the series who owns ALL the Mario Golf games, I think with the inevitable upcoming courses, this is a great new entry for old or new fans.

Wow. I'm super-disappointed with this review. I was very much looking forward to this game. I love the Mario golf games and typically buy them. Now I wonder if I should.

Bummer. Like many, I'm a big fan of these sports titles. I played Toadstool Tour a bunch and was really excited for this one. It's one of those (lately...common) things where you want to play and enjoy the game you just bought, and don't want to wait a year for it to become finished.

Also - just in case anyone's wondering, NWR isn't the only site that feels this way about the game. Many reviewers are posting similar opinions.