A remarkably chill board game adaptation with lots of multiplayer options.

Wingspan is a video game adaptation of a recent award-winning board game where you gently compete with friends to attract and raise the best birds possible. The board game is extremely well regarded, and the translation to Nintendo Switch is impressive, both in the way it communicates information and is visually laid out. While I wouldn’t necessarily recommend the video game version over the board game, this is one of the best tabletop-to-video-game adaptations I’ve ever seen. 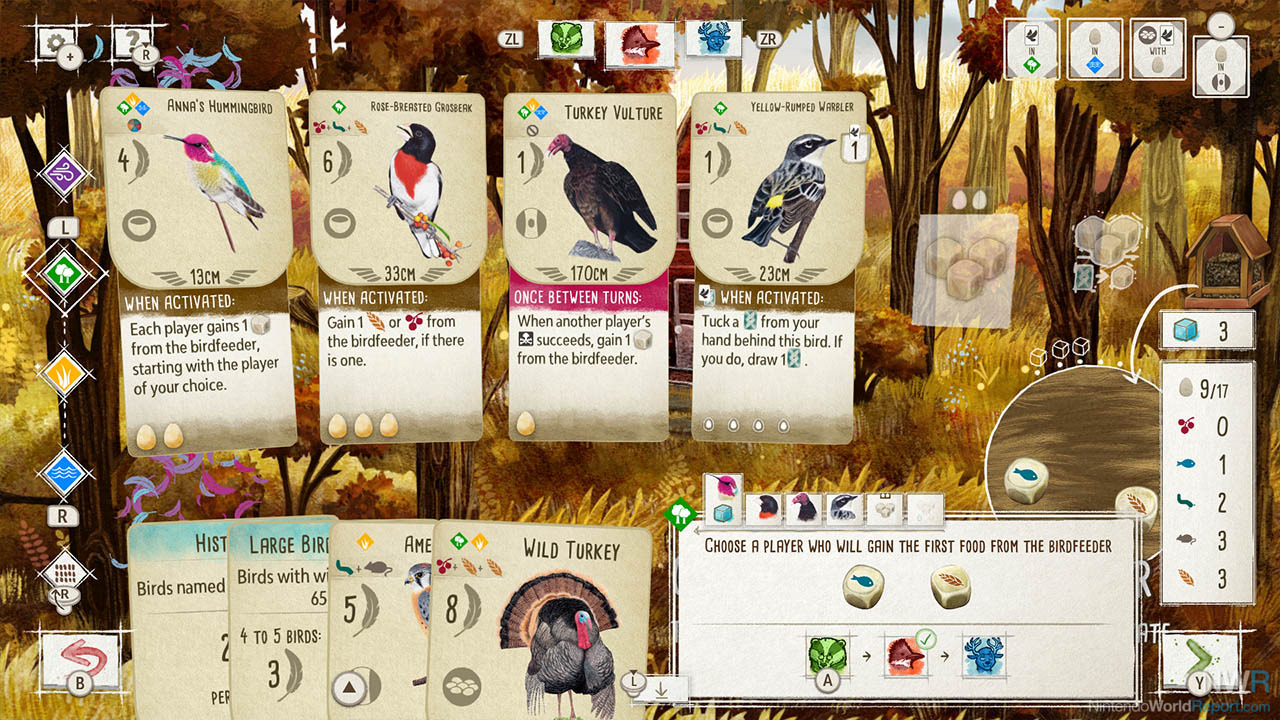 For those brand new to Wingspan, a lengthy tutorial hits at the flow of the game. The overall game is split into three rounds with multiple turns per round. Your goal is to accrue victory points, gained by making bird nests, hatching eggs, playing bonus cards, completing end-of-round goals, and more. The rules and structure are a lot to take in and as a newcomer, I found it best to kind of just play and learn by doing (if you’re really stumped, check out this video). It’s, for better or worse, the kind of experience that requires a good deal of explanation, which does make the barrier for entry higher. However, I can speak from experience that, like some board games, as long as you have one relative expert on the rules, you can jump right into the game with other newcomers as long as you take your time with the first round. This can be played with five players locally, which is fantastic even if the pace is slow. Local play works well, though the fact players can’t really do any prep work on what their next turn will be (since each player takes control of the whole screen on their turn), turns can take quite a while. This is where the portability of the Switch is a plus, because you can essentially just pass the console around to players and take your time with the game without dominating a TV screen. If finding friends locally is tough, an online mode (complete with crossplay with the Steam version) is also out. In my experience, it worked very well, though it seems best engineered for playing online with friends versus with randoms. 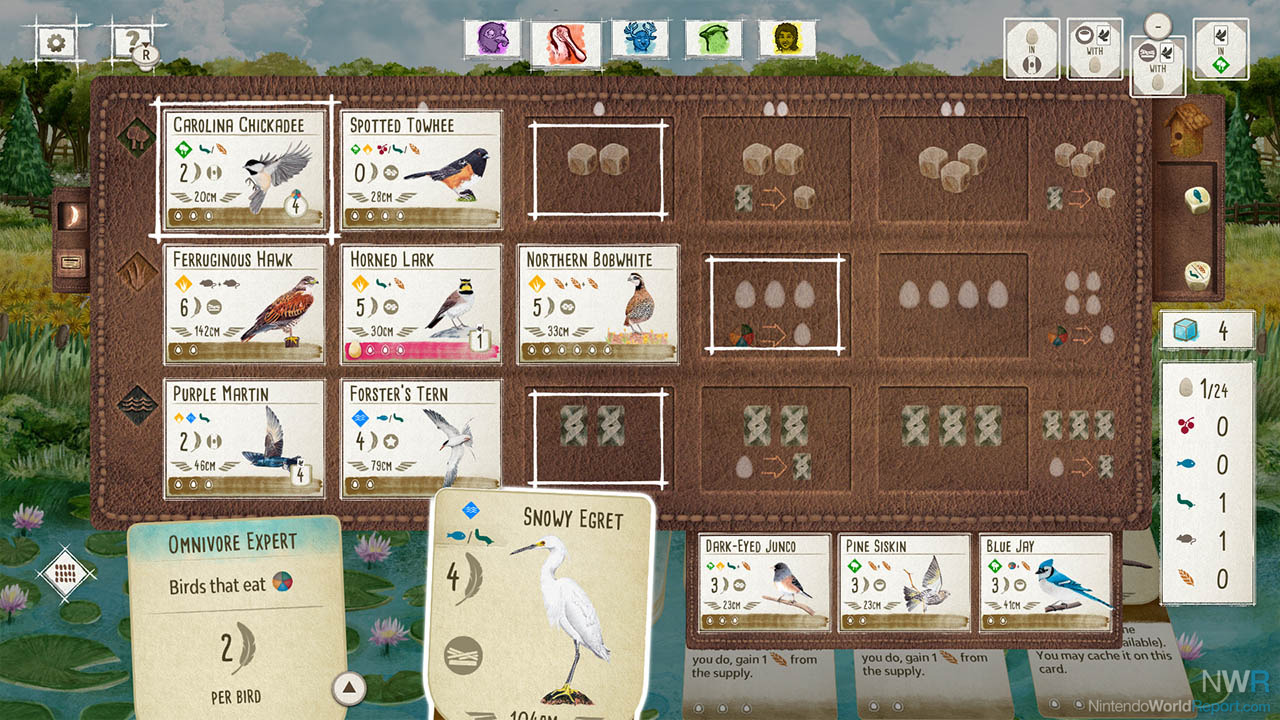 You can also take it for a spin in single-player with anywhere from one to four CPU opponents. This also works well and the pace is much improved since the non-human turns move faster. It’s like playing any board game by yourself, though, which at best gives it a sizable “your mileage may vary” warning. On top of the basic mode, there is also a fascinating solo variant called Automa. You play by yourself against a computer-controlled opponent that doesn’t play traditionally. It took me a while to learn the mechanics of it and how exactly the AI opponent operated, but it’s definitely better than a traditional match against the computer.

The secret sauce of Wingspan is how serene the presentation is. It has oodles of bird and nature sounds that make for a calming aural experience. The visuals have a nice hand-drawn aesthetic that pairs well with the audio, while also making what you can do on your turn and how things will respond to your actions clear. A lot of this is why the general slow pace of the proceedings doesn’t bother me as much because this is a chill game. 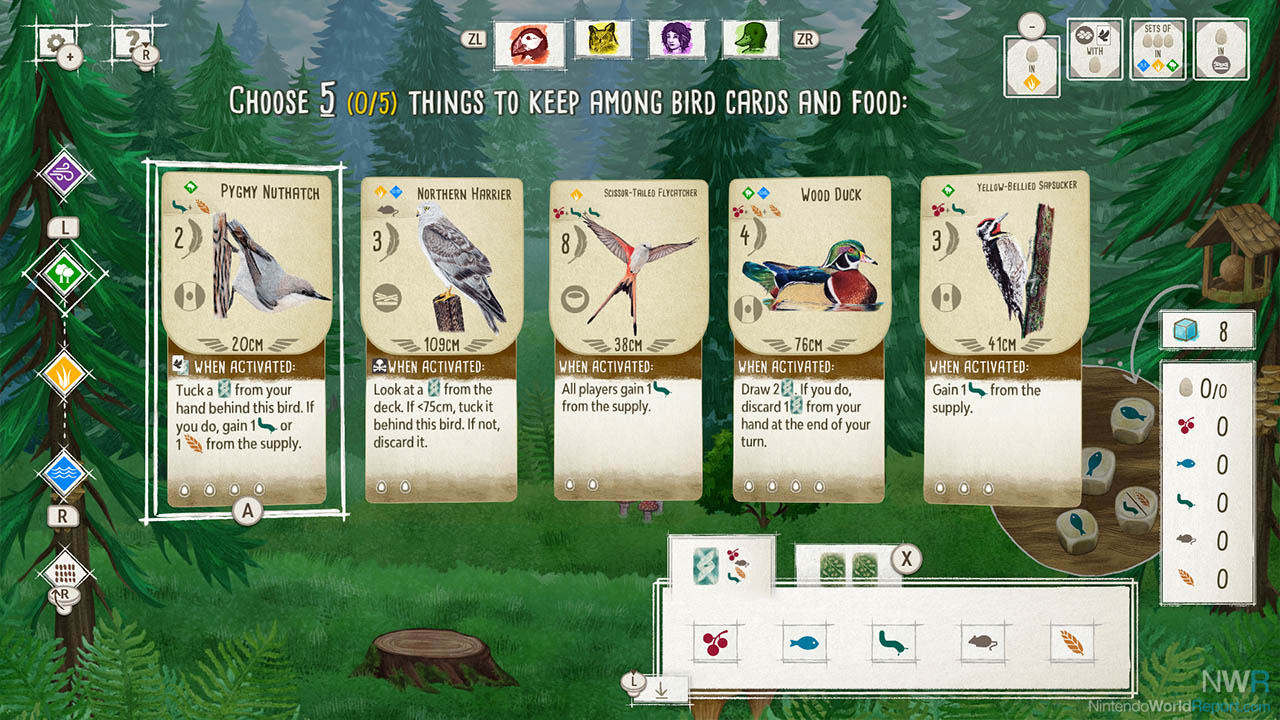 While I might recommend the board game over the video game overall, the video game is a worthy complement. It’s also a good local and online multiplayer experience (especially with crossplay with the Steam version), which gives Wingspan an added benefit in 2020. No matter what year it is, Wingspan is a remarkable adaptation of a tabletop game that is certainly one of the best of its kind on Switch.