Putting the punk back in cyberpunk.

There are times when I come across titles that are so obvious in their design and ideas, that it’s hard to imagine that it hasn’t been done before. Recent titles like Disc Room, Super Mario Bros. 35, and Carrion have shown me that even if an idea has been well trod, changing a core aspect of the genre can go a long way. You probably have dabbled as playing a Ninja in many video games. Whether it’s as Ryu Hayabusa in Ninja Gaiden, Raiden in Metal Gear Rising: Revengeance or as Sheik in Hyrule Warriors. Ghostrunner sets itself apart by transporting the player into the first-person perspective of a cyberpunk Ninja battling against an authoritarian regime. Combining first-person platforming with fast paced melee combat, Ghostrunner has sharp game design that never becomes blunt and keeps me coming back for more.

You control the Ghostrunner nicknamed Jack (as I’m pretty sure in reference to another cybernetic ninja warrior). After falling to your doom from the top of Dharma Tower during a confrontation with the Keymaster of said tower, Mara, you are awoken by an artificial intelligence known as the Architect. It instructs you to reclimb the tower and destroy Mara. With the aid of a resistance member named Zoe, you unlock new cybernetic enhancements to jump, dash, and slash your way around and through Mara’s many henchmen. I cannot stress enough how good it feels to actually play a game that has a cyberpunk aesthetic that emphasizes that you are in fact playing as a punk, fighting an oppressed system. Everything in the humongous Dharma tower feels like it’s part of an never ending conglomerate, and your goal is to stop anything that stands in your way. Many “cyberpunk” titles over the last couple of years have been pretty restrained by only lifting the visual design of other media like Blade Runner, while not really engaging with the themes that are prevalent in cyberpunk as a genre. While I do think that the story isn’t spectacular or mind blowing, it feels good that at least one cyberpunk game this year emphasizes what the genre was originally intended to critique. 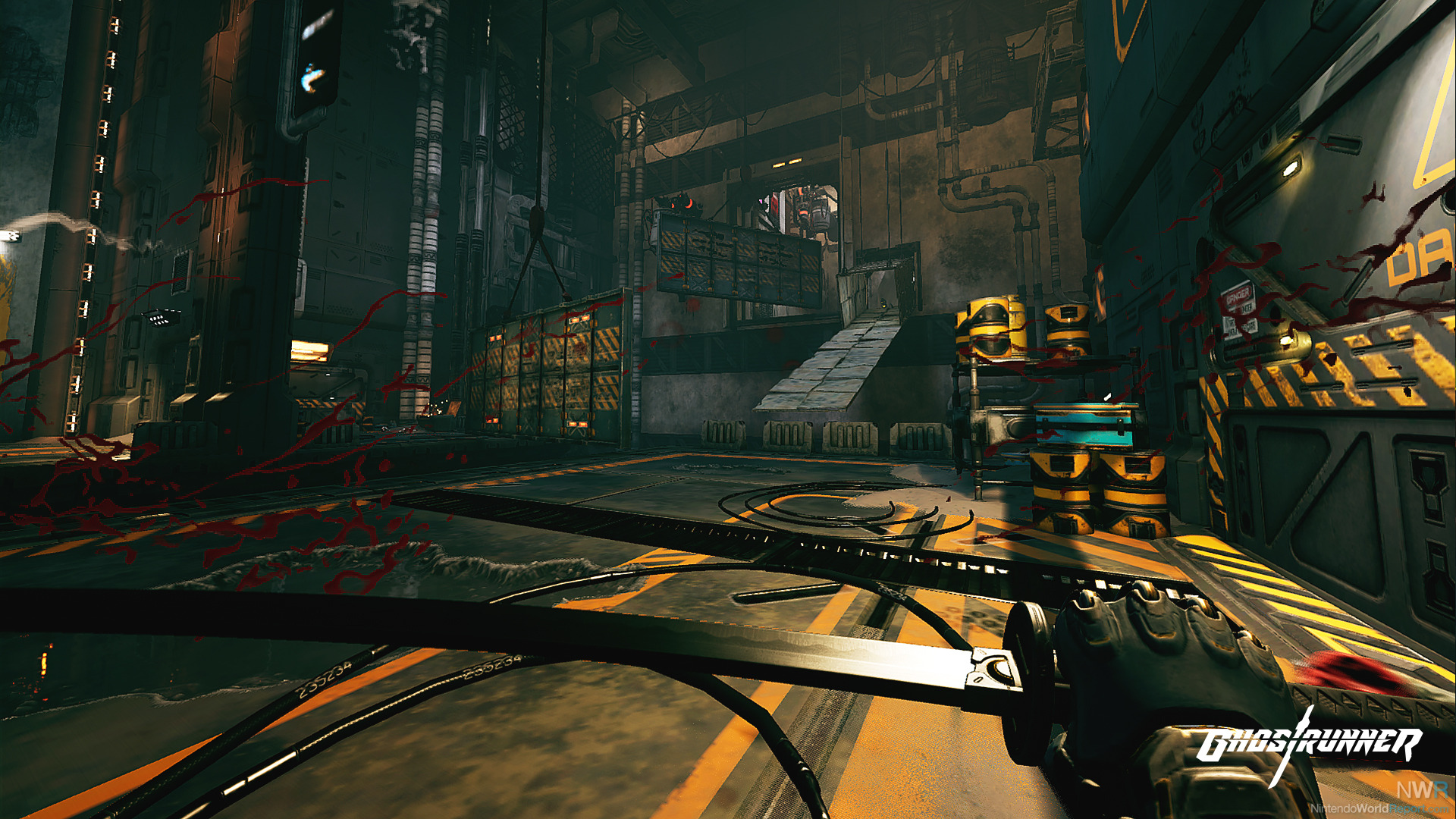 These ideas are communicated through Ghostrunner’s gameplay. The gameplay can best be described as Mirror’s Edge on steroids with a combat system that almost reminded me of Superhot. You run across walls, jump over gaps, slide underneath obstacles, and can even dash mid-air to slow down time and dodge incoming attacks. Opposing shots can also be deflected by swinging your sword at the right time. The Ghostrunner can regain his old abilities by accessing the Cybervoid. In these puzzle rooms, the goal is to use your abilities to reactivate old parts of your body and unlock new attacks and moves. One of them is the blink ability, which slows down time and allows the Ghostrunner to slice through a line of enemies. You also unlock a grappling hook, which enables you to quickly tether to walls and objects. Interestingly there is also an upgrade system that enhances the capabilities of the Ghostrunner, and this can be swapped at any time. This setup is similar to the Keyblade management system in Kingdom Hearts 358/2 days, where you have blocks of a certain size that can be used to fill up a grid. You can rotate and replace pieces at any time for your own optimized experience. It’s really neat, and there are a ton of upgrades to experiment with.

Stages can be divided into three different segments: platforming challenges where you make your way through the tower; the aforementioned puzzle rooms in the Cybervoid; and finally the combat challenges where you have to defeat a group of enemies before being able to proceed. What makes the gameplay of Ghostrunner so addicting is that every type of traversal, attack, and enhancement can be strung together to take out groups of enemies. It also makes you feel unstoppable in the process. You can jump from wall to wall, drop down on enemies to slice them open, dash away from an opposing shot, or slow down time by dashing in mid-air and taking out the final opponent in an instant. Jack can only take one hit before having to restart, so careful planning of your route and replaying levels is par for the course. However, once you get this route down, it’s the most satisfying feeling I’ve encountered in a video game for a long time. It can be brutally difficult at times, but overall I found that with enough practice I could become that ninja at the end of every encounter. The developers are true to their name, because I kept playing “One More Level” every time. 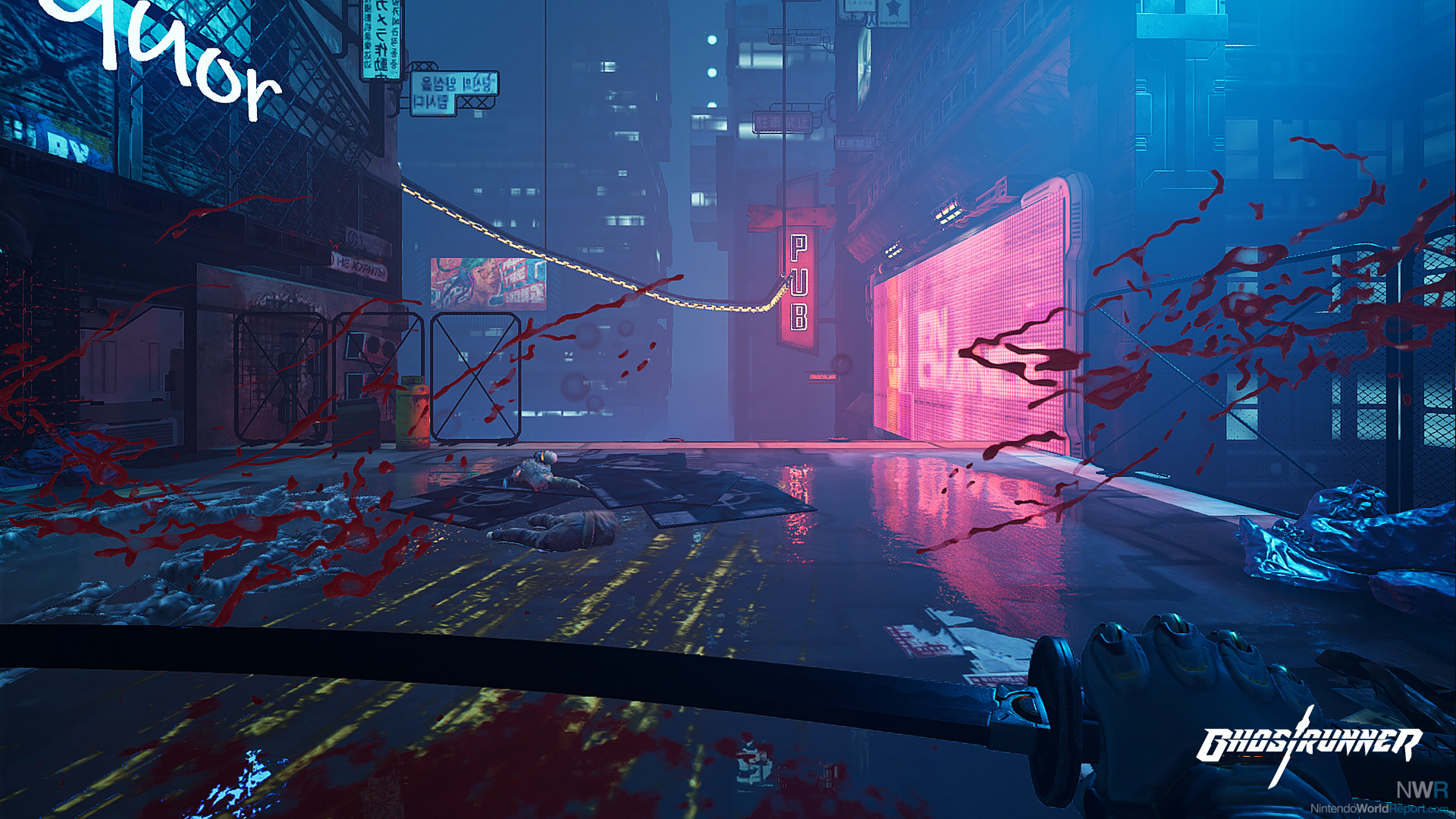 I do have to touch on the graphical performance of Ghostrunner. I was skeptical that this game would be able to run well on the Nintendo Switch. It’s being released late into the lifespan of most last-generation consoles and it has been announced to be coming to the PlayStation 5 and Xbox Series next year. However, I was pleasantly surprised that while the game is clearly compromised on the graphical front, performance was largely unhindered. During my time with the game an update was released that fixed a few notable framerate issues and I’ve been enjoying it ever since. In handheld mode, the game can look fuzzy and pixelated at times, but in docked mode I found it to be looking decent enough while still running at a respectable framerate. My only other gripe is that the UI is pretty small and can be hard to read. There’s a few accessibility options with regards to the controls and sensitivity of the sticks, but I would’ve liked to see some additional tweaks to give players the option to enjoy the game in different ways, such as being able to take more than one hit for example.

Overall, Ghostrunner is one of the sleeper hits for this fairly empty winter season on the Switch. Where the foundation of titles like these was laid down by games such as Mirror’s Edge, Ghostrunner improves the combat systems and uses many tricks to keep you on your toes. Complemented by both the cyberpunk aesthetic and gameplay, this title will keep you coming back to perfect your ninja-skills.