I… shall consume… everything.

The premise of Carrion is so simple that it’s almost baffling it hasn’t been done before. Unlike other Metroidvania games where you play as the protagonist, defeat enemies, and make your way out of an enclosed maze, Carrion lets you control a monster. Clearly taking design inspirations from famous horror creatures like The Blob, the xenomorphs from Alien and especially John Carpenter’s The Thing, you claw, rip and tear your way through laboratories and research facilities. On your way out, you consume every living being you can get your bloody tentacles on. While not redefining the Metroidvania genre, Carrion envelops you in its atmosphere and horror like very few titles do.

Plot wise, Carrion leaves much up to interpretation and environmental storytelling. From the opening, very little poses an actual threat to the creature. That’s not to say you’re invulnerable. Gunfire, drones, mechs, and flamethrowers still form obstacles that prevent you from escaping easily. But movement is always snappy since you can scale any surface, breathe underwater, and quickly dodge into vents and air ducts to avoid detection and sneak up on unsuspecting scientists. The carnage you leave behind after… erm… “dinner” also helps you easily trace your earlier footsteps. Which is quite helpful since there is no map, meaning that the environment is your guide to moving around the different facilities. This is where the 16-bit art style really shines. All the animations are fluid and make the movement and actions that you can perform satisfying to pull off, while also providing some fantastic scenery that really would fit a mad scientist’s horror lab. The overworld, called the Frontier, is divided into several levels that each have a unique design. You are sometimes required to backtrack to an earlier section after collecting a power-up, but most of the game forgoes the backtracking you might expect from a Metroidvania. 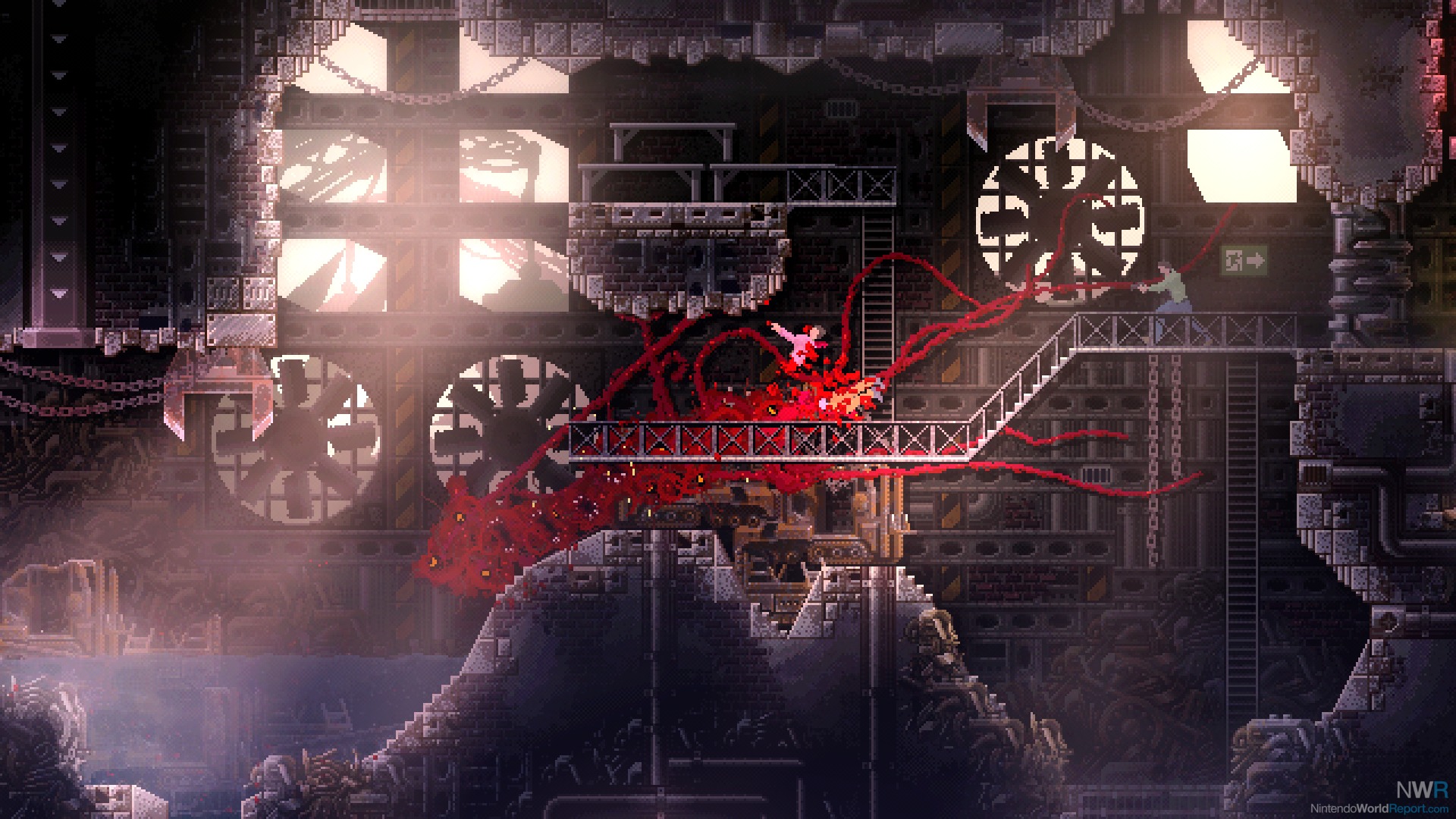 This pacing is part of the masterful trick behind Carrion. The creature is able to grow to different stages that allow for a different set of abilities to be used. The first form has a cobweb that can be used to activate levers from a distance. But its second form has a bashing ability that allows you to break through certain obstacles. Later on, you unlock one power-up in particular, which I won’t spoil here, that changes the entire dynamic of how you engage opponents. It’s really something special. To solve puzzles, you often need to change between forms by either consuming more humans or by depositing some of your body into specific bodies of water. These deposited parts can later be reclaimed in order to grow to full strength again. This made it quite fun to open up routes stealthily in the first form and return in the more powerful form to make quick work of the security. Dropping in on a group of humans cowering in fear and ripping them apart felt as satisfying as it was brutal. The sound design is amazing, with the screams of victims filling the halls and the creature making terrible sounds to scare them off.

The only part where the game fell flat for me was in the combat. For most encounters, you guide one of your tentacles with the right stick towards the enemy and either rip them in half by smacking it around, or by eating the human. This means that combat tends to be chaotic as you are both focusing on your own position while guiding your limbs towards enemies to grab them. Thankfully, you don’t feel too overpowered for every encounter, but when things get hectic it can be easy to lose track of your position and possible movements, especially when you change forms when taking too much damage. Performance-wise, there is absolutely no downgrade to playing on the Nintendo Switch. Both in handheld and docked mode, the game runs unbelievably smooth. I actually really enjoyed the easy snapback that the tentacle controls have due to the sticks of the joy-con in handheld mode. Every kill felt so satisfying, and it’s great to pick up and play to hunt down all the unlockable upgrades and secrets thanks to the nature of the Switch itself. 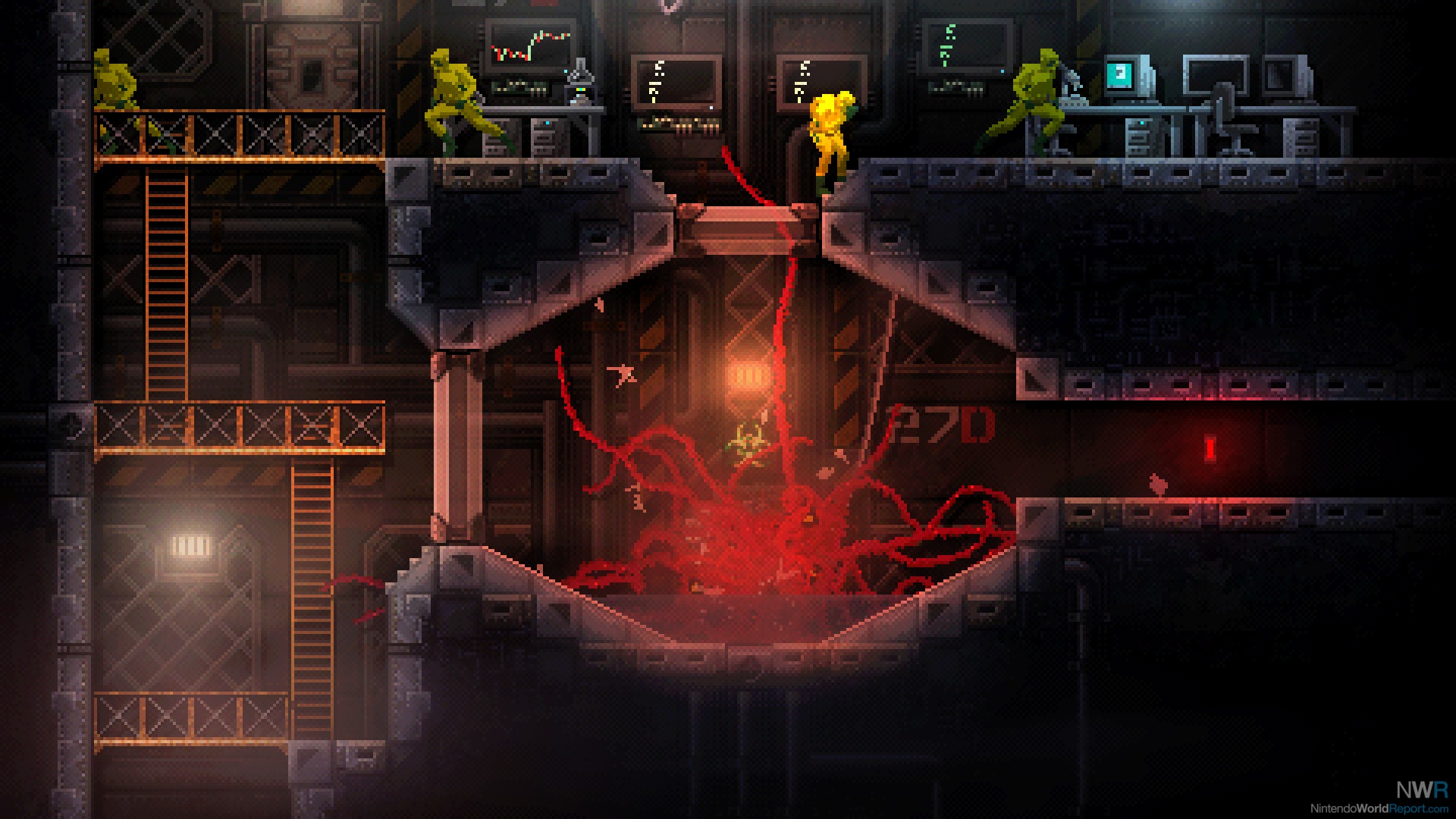 Carrion often made me sit in disgust and reflection as I left behind a trail of guts, spines, and blood. It’s an incredibly atmospheric, satisfying Metroidvania that toys with expectations of the genre and just feels great to play. Its length is an advantage as the game doesn’t overstay its welcome. Even after the credits rolled, there were still a lot of optional power-ups to hunt down. Carrion feels familiar in its gameplay but unique in execution. The blood may still be freshly dripping from the wall, but Carrion is certainly one of the highlights in gaming from this year so far.