Rock of Ages 3: Make & Break might be one of the strangest mish-mashes of genres and styles I’ve ever encountered. Or, at least, me coming into it completely blind meant I couldn’t prepare myself for a grab bag that’s less eclectic than erratic, more schizophrenic than eccentric. Ace Team brings us this fever dream of a game, the apparent third in the series which makes me wonder: Has the series become more or less abstract and strange over time? I don’t think I want to know. 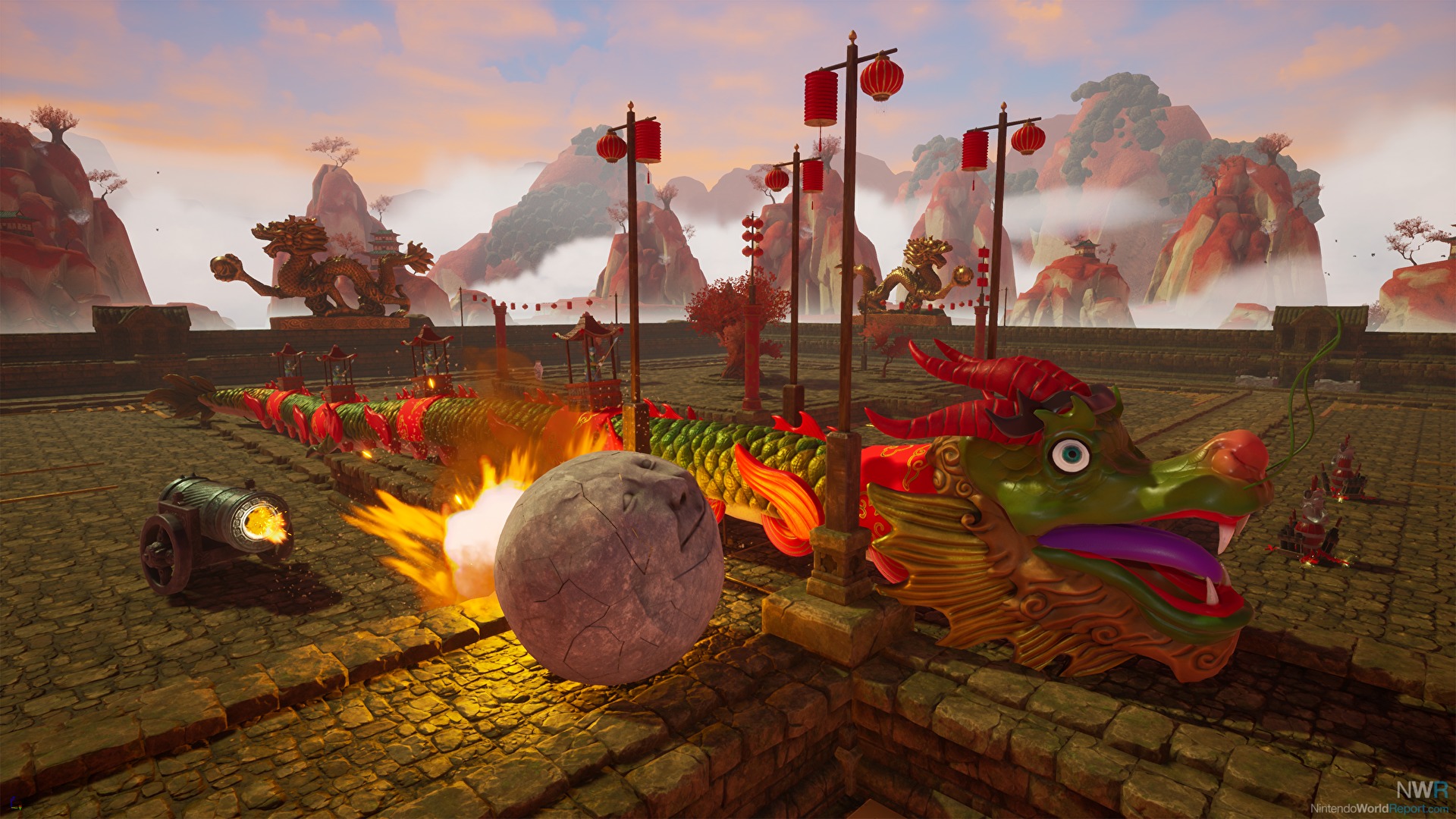 Focusing on this effort, for those like me who have no prior experience with the series, Rock of Ages 3’s gameplay is primarily focused on rolling a giant boulder through a set of checkered narrow courses, which consist of pathways with obstacles to derail your route to the also-checkered finish line. These obstacles do different things: spring-trap platforms send you flying in the air and often off the ledge, catapults shoot at you, and giant buffalo-like beasts freeze the boulder in place for several seconds. This base gameplay is used in a handful of game modes that all play out like some sort of race, either against the clock, against an opposing boulder to the finish line, or amusingly as a race to the end where a Skee-ball set-up awaits you. A robust level editor toolkit is also included. I found it easy enough to navigate the menu items and construct a crude level, but the core game doesn’t excite me quite enough to really put it past its paces other than to say it feels like it’d be a bit better served with a mouse and keyboard.

The most unique levels in the single player campaign are a blend of boulder rolling and tower defense. Pre-match, I got to select a boulder type as well as a handful of traps and abilities. Both my opponent and I each had an individual track and castle with an HP bar you’re tasked with defending with the aforementioned traps. As I laid down the traps, a meter in the image of two men constructing the boulder slowly builds. When complete, I was able to pause and start rolling on their track, which was rife with whatever bad intentions they had for me. If either of us could roll to the castle door at the end before our boulders broke, it’d shave off HP based on how much damage we took on our trip, and then it was back to trap scheming. The first to lose all their HP is defeated. These levels can be exciting and dynamic, but as the game wears on they start to drag. Rock of Ages 3’s best impressions are made when levels are short and sweet, and enough levels go against that grain in a really unpleasant way. 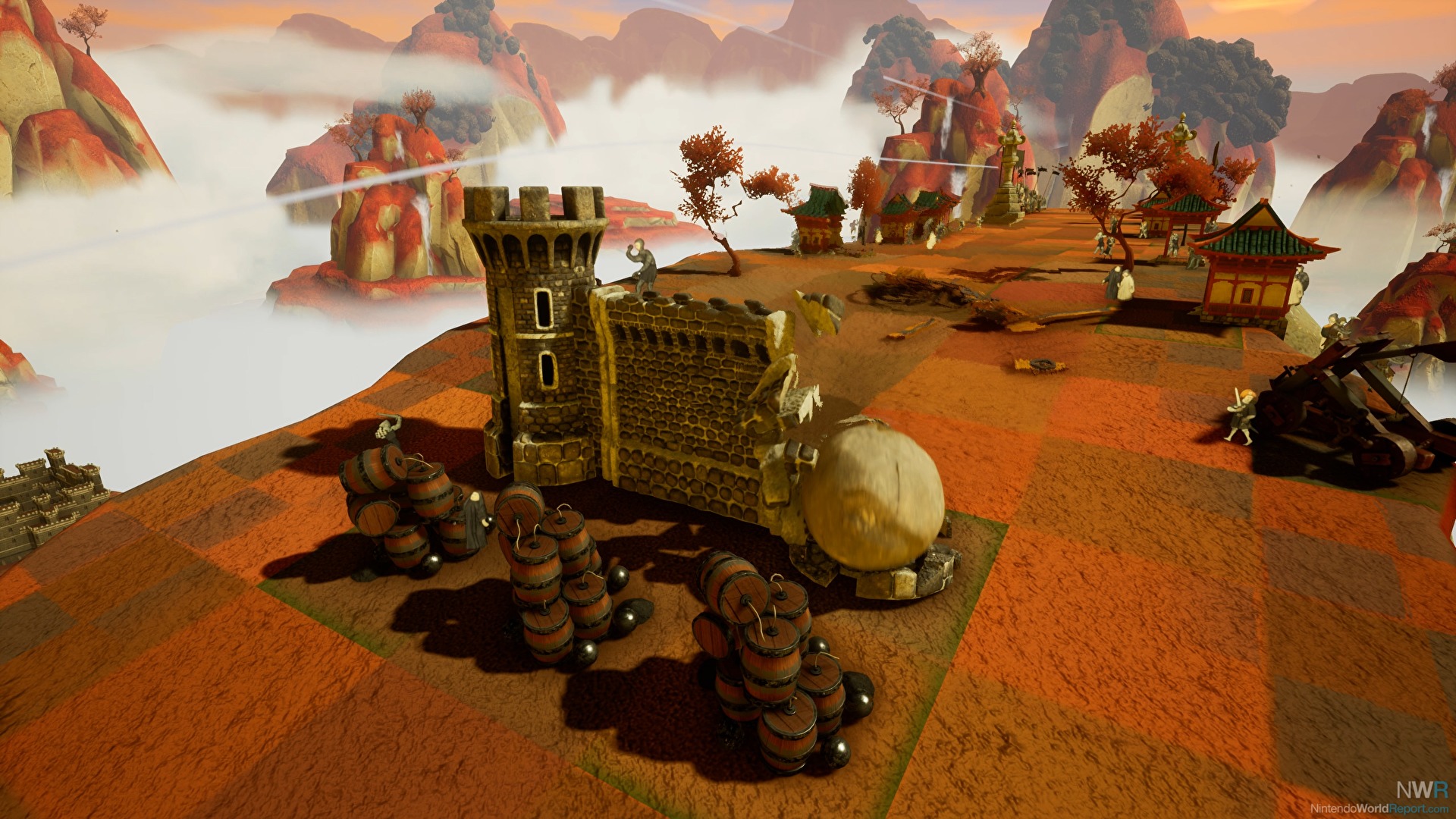 Stylistically, it leans very heavy into cribbing the Monty Python style. Vignettes with paper doll like figures against a flat backdrop are the preamble to each segment of levels, themed with a period of history (caveman, times of Caesar, India Empire) that at times has clever humor and wonderful timing; at other times, it leans so heavily into grunts and fart noises that its off-putting. Each segment of history represented has one primary piece of music, presumably from that era. This isn’t a problem in and of itself, except that how much this game is focused on repetition to get the best possible score to progress means you’ll hear those tracks over and over before you’re done.

Rock of Ages 3: Make & Break is what I’d guess is a refinement more than a revolution of their ongoing series of paper cut out, boulder racing, and tower defense game using historical figures and public domain music. My disappointment isn’t that it’s a bad game, more that I see the potential for a really special indie title that could have a diverse array of level types, well-crafted humor, and a well-defined creator tool to build a more evergreen creator community around. I enjoyed my time well enough with it, but the decision to buy will depend on whether the drawbacks hit enough of your personal pet peeves.