We Are Doomed (Switch) Review

Why are we doomed? I don’t know why. That’s just the name of the game. 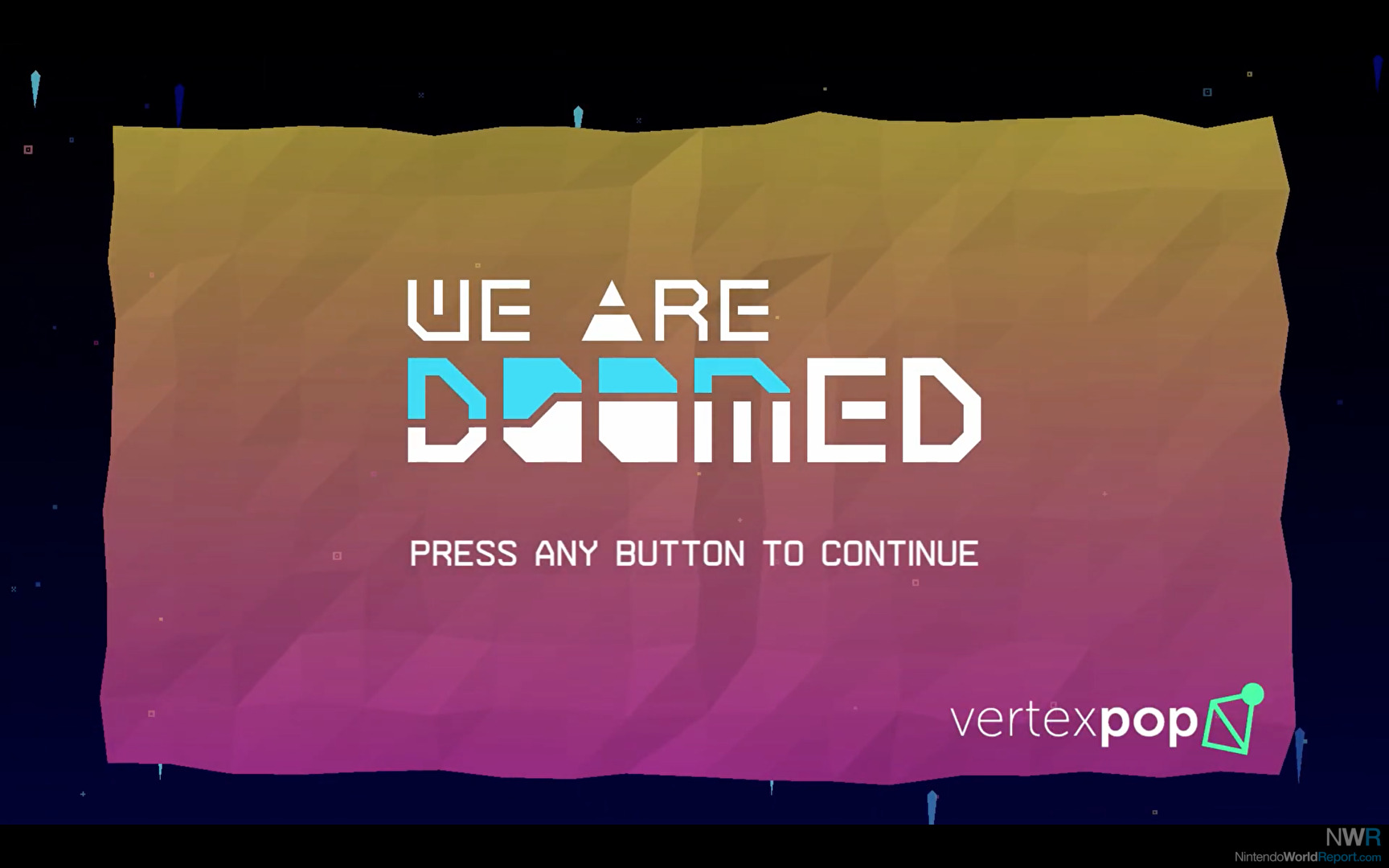 Let’s face it: a ton of shoot-em-ups are available on the Switch. Picking one to play can be hard, as they all have different quirks to try and grab your attention. So what does the latest shoot-’em-up, We Are Doomed, do differently? Frankly, not much. And that’s not a bad thing by any means. We Are Doomed is by and large a standard twin-stick-shooter affair with dazzling visuals and that classic arcade addiction. I didn’t want to put the controller down. 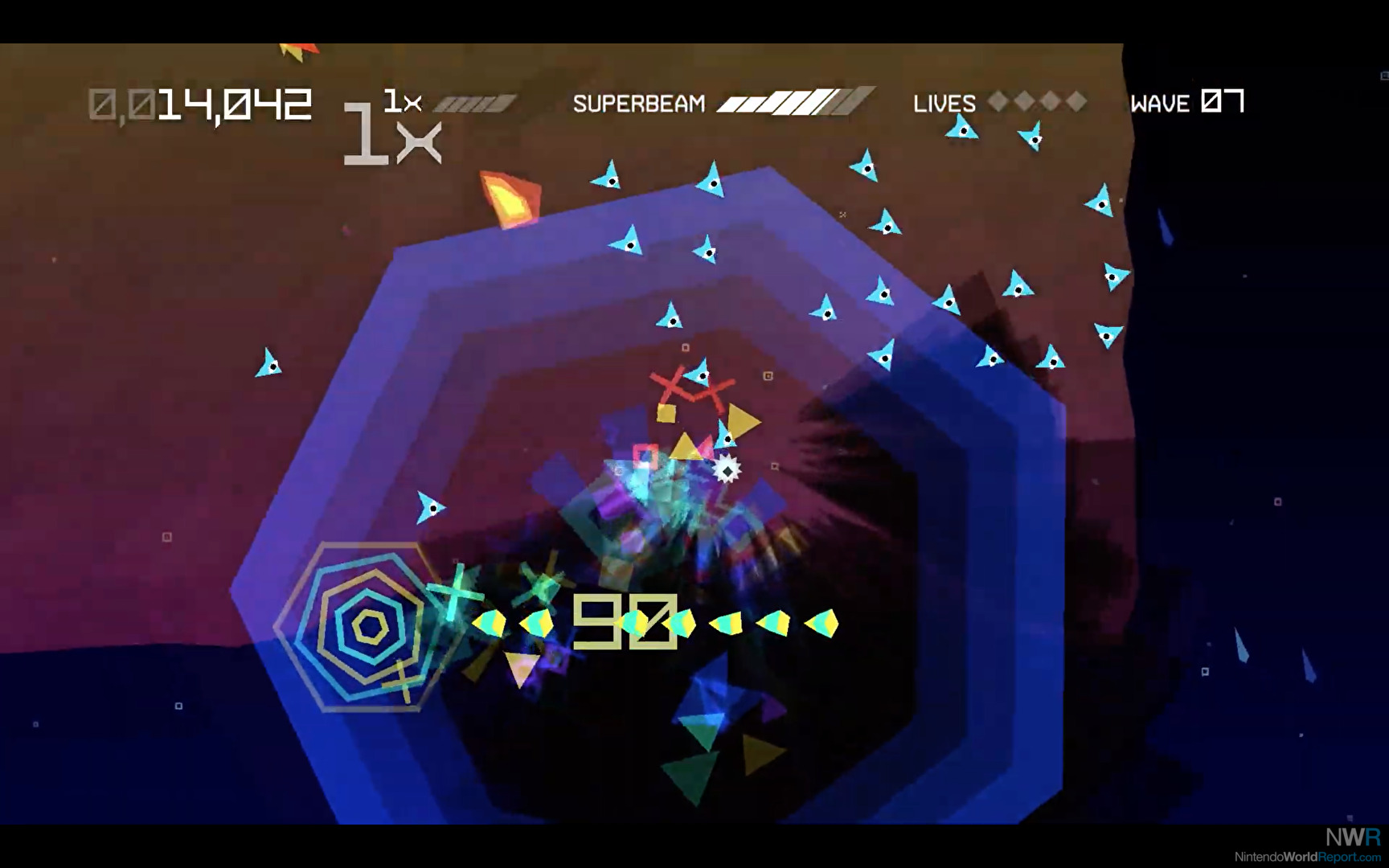 In terms of context, not much is there to grab on to. You take control of a small, spiky-shape character and use one giant laser to fry various geometrical enemies that are zooming all around the small area, whilst avoiding any of them or their attacks, and trying to collect enemy drops to increase your score. Like many titles before it, scoring the high score is the real goal of the game, and thankfully, the inclusion of a leaderboard for both world scores and scores on your friend list is available from the get-go. There is no shop to spend anything on or abilities to buff up yourself. It’s simply a start-and-stop experience. Once you run out of health, you’re out and have to start over. There are only two modes, both of which offer a similar experience: Wave Mode and Endless Mode. I didn’t see an option for multiplayer, which is a bummer exclusion. In the mode where you fight waves of enemies, you can restart at different checkpoints that are unlocked after completing every tenth wave. Sure, you lose your score, but it makes it easy to go back and try to get more hands on time with the harder waves. HD Rumble is used lightly in this regard. When you take the last hit you can afford, you feel it in the controller, and it’s devastating. 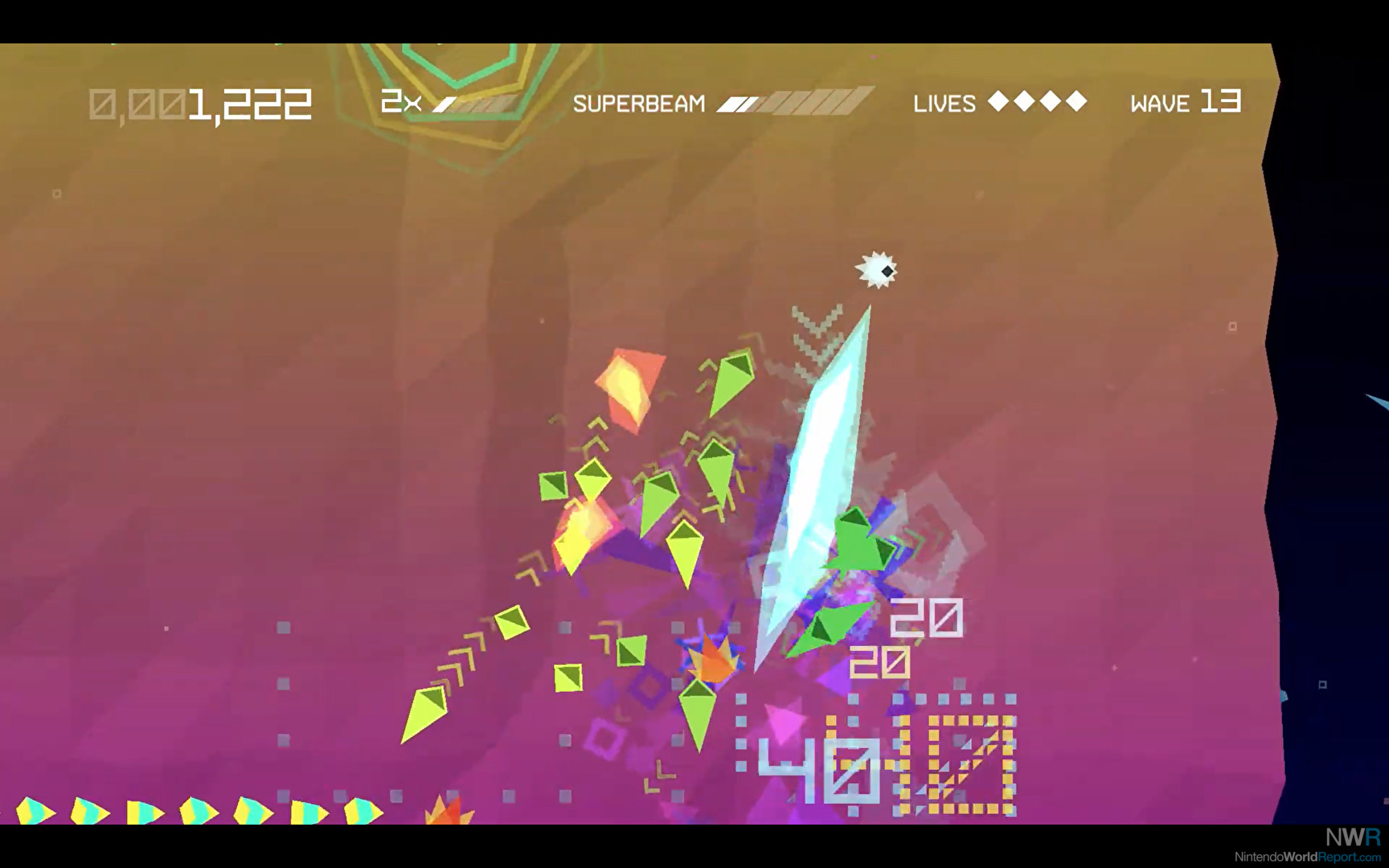 Instead of having an array of bullets being shot from your character, you are equipped with a trusty laser that is always beaming. As is the case of the twin-stick shooter genre, you navigate with one stick, and aim with the other. It can get tricky at times because of the lack of the ability to aim and shoot, instead having to navigate through swarms of enemies and have the laser on enemies long enough to destroy them. Because the laser isin’t screen wide, you always have enemies within a dangerous distance of your ship, which creates a satisfying amount of tension and challenge. Difficulty wise, it’s definitely not a complete walk in the park, but you can spend several minutes on a single run and feel every sting when you lose a pip of health...and there isn’t a way to recover any. This feels intentional to the game design. That said, I still managed to see all 30 waves in one afternoon. Each wave is handcrafted, so you can keep coming back and expecting to a degree what is in store for you. Enemies are designed with unique abilities that intentionally try to get around your laser and mess you up. For example, an endless chain will spawn around the perimeter of the arena or on set tracks. Some enemies can fire back at you, while others only move diagonally or take multiple hits. Once you’ve got a feel for the various enemies, you can also take on endless mode where just about anything goes, and it’s ultimately a survival test. 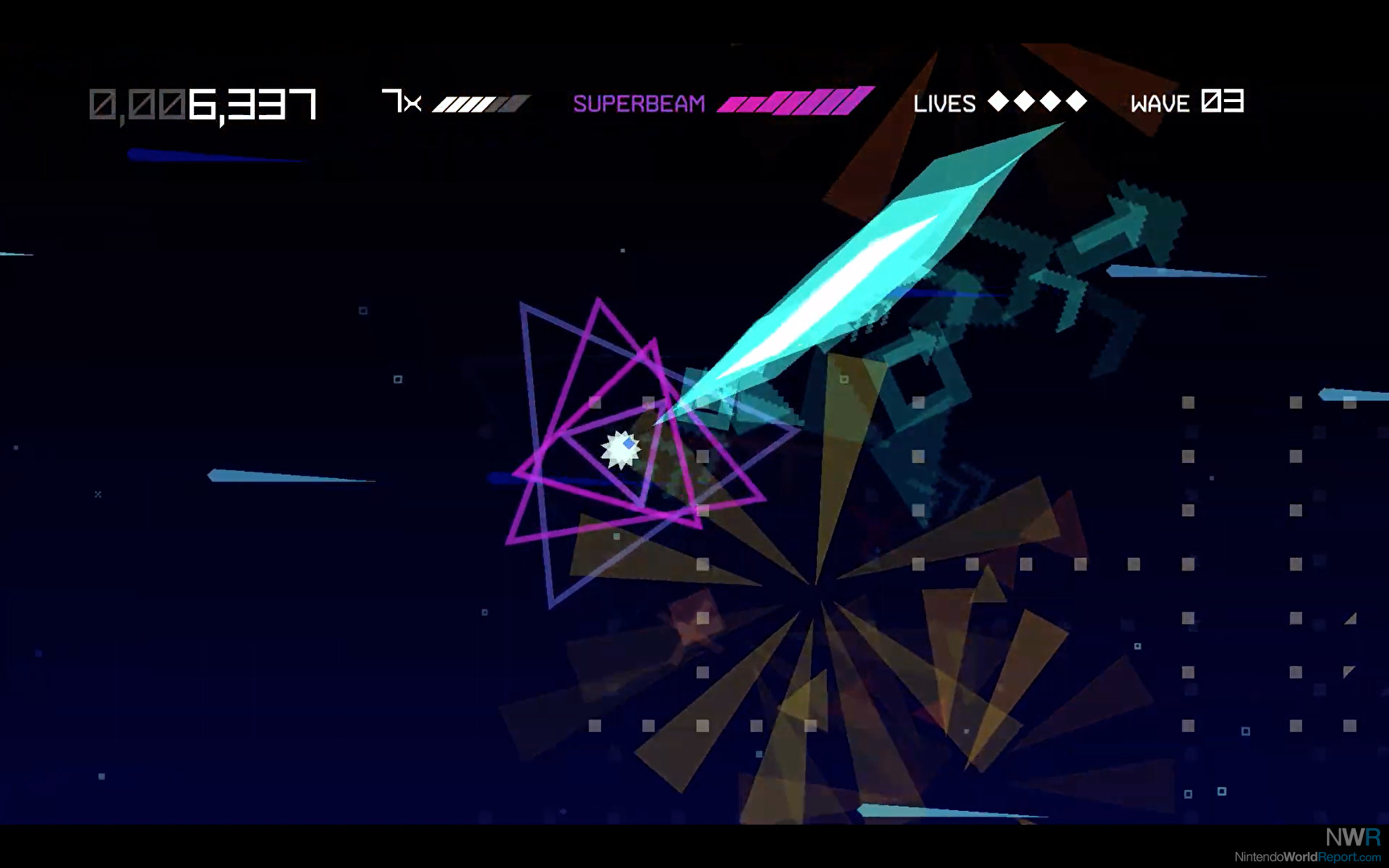 A major element that We Are Doomed has going for it is it’s direction in the visual department. It goes for a minimalist color look, with only a small palette for each thing on screen, but dances over into being cluttered with just how much is on screen. I really enjoyed watching all of the effects, but at the cost of in the early moments it was a little over stimulating and distracting. I got used to it quickly, however the initial moments of trying to survive, look at everything happening, and play the game itself were overwhelming. Unfortunately, I did not see any accessibility options for those who may find the visual effects too much, or may struggle with the color schemes if color blindness is an issue. That said, there is a remarkable amount of polish here. It’s clear some serious effort was put into making the visuals, and also juxtaposing them to the gameplay. For example, the background is usually the same magenta to orange gradient, but will shift and create a green gradient that hones in on where the enemy drops are. Contrasting lines also show up where enemies are about to spawn, and occasionally they would spawn on top of my character which felt unfair, it wasn’t anything that ruined the experience for me. Handheld mode too showcases the very nice visuals, with everything running smoothly.I will say, I preferred playing in docked mode with a Pro Controller just because of the Joy-Con joysticks not feeling as great to use. That said I landed my high score in handheld mode so it’s not like it’s that much worse. 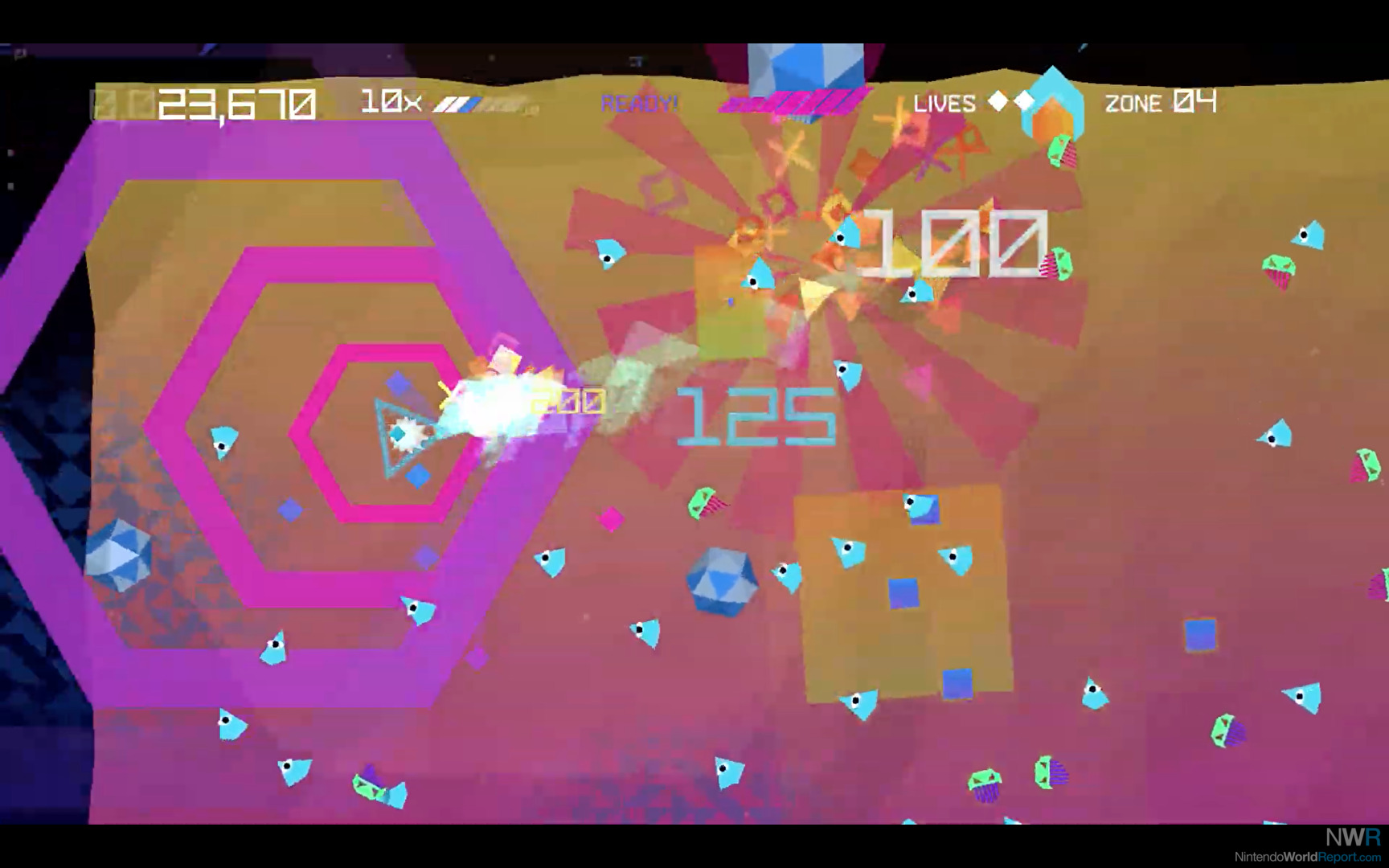 We Are Doomed is a great, easy-going experience that can easily be picked up and played at any time. It boasts some beautiful visuals, feels smooth and polished, and while it doesn’t offer too much in terms of innovation for the genre, what it is doing is great. There isn’t a lot of content to explore, but what is here is a lot of fun. Check it out if you are interested.