Every day I wake up in the morning with the urge to slap around some bunnies, so Radical Rabbit Stew coming into my life has been a blessing. As an action-puzzle title, Radical Rabbit Stew offers fast-actin’-attackin’ bunny slappin’ as you attempt to land these furry devils into a boiling pot of stew. Fighting the rabbit menace has never been more satisfying, with top-notch puzzles, interesting mechanics, and even the feeling of your trusty spoon connecting with cotton-tailed foes, evoking similar emotions to the smell of fresh-cut grass or that first sip of a can of Coke. Besides a lack of diversity throughout—especially in the boss fights—this is one of the more unique and enjoyable puzzle titles you’ll find on the Nintendo Switch this year.

The illustrious space chefs have been captured by space-faring rabbit overlords, and it is up to you to free them while cooking up some coney justice. Leaping right into the action following some old-school movie projector narration, your character is on a mission to bash bunnies before it’s too late. Light on story outside of this basic premise, Radical Rabbit Stew is more of an arcade experience than deep storytelling venture, but the gameplay is so fresh that it really isn’t a downside. 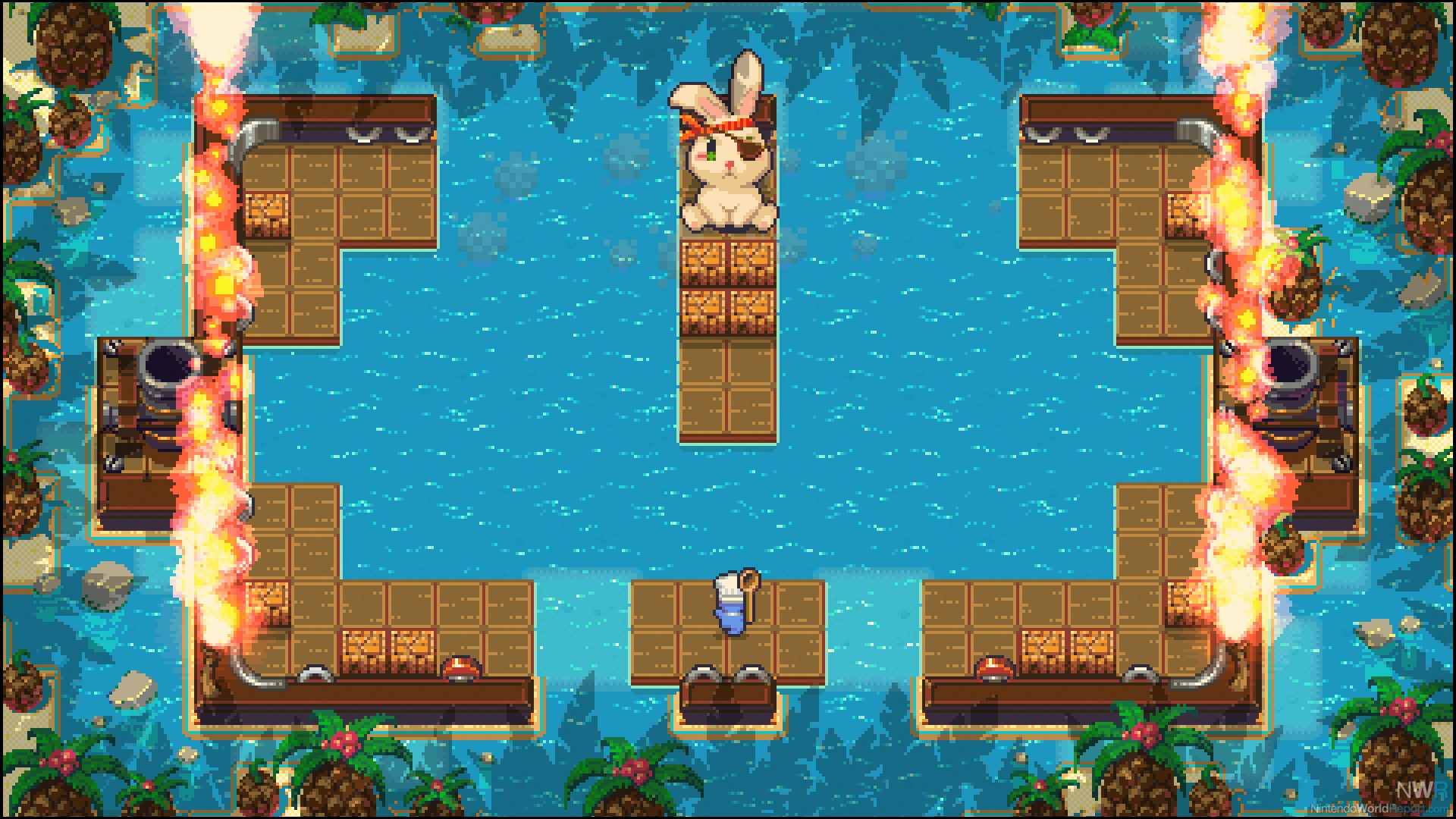 After choosing your stage from the overworld map, the gameplay starts with a series of rabbits spawning across the level, with various silver cooking pots scattered around as your end goal. Each pot needs a single rabbit in order to progress, but this process won’t happen without some violent persuasion. Striking the rabbits with your oversized spoon will send them flying in the direction you are facing. So, basically, you just need to smack the bunnies around obstacles until you can get a clear shot at the pots. Breakable blocks, walls, and open water will need to be maneuvered around in order to properly solve the puzzles, in a similar manner to the cave-rock puzzles in the early Pokémon titles.

After conquering each world, an upgraded spoon—or additional health to help stave off some serious rabbit bites—is given to open up new styles of puzzles. From the Silver Spoon, which allows you to use a charged spoon attack that sends heavier bunnies flying, to a hookshot-esque claw that lets you grab and pull rabbits or yourself through the stages, Radical Rabbit Stew transforms after every dozen-or-so levels to keep things interesting during the entire playthrough. Besides simply getting the rabbits to the end goals, hidden coins are also available in some of the levels that add challenge and replayability to the stages. This mechanic forces you to think outside the box in each stage, and since the gameplay is so enjoyable to begin with, it just makes for more play potential.

A minor versus mode sees you competing with up to four players for dominance, where whoever gets the most rabbits into the pot wins. Additionally, a stage editor allows for even more content for you to play within Radical Rabbit Stew, even if these extra portions are pretty bare bones. 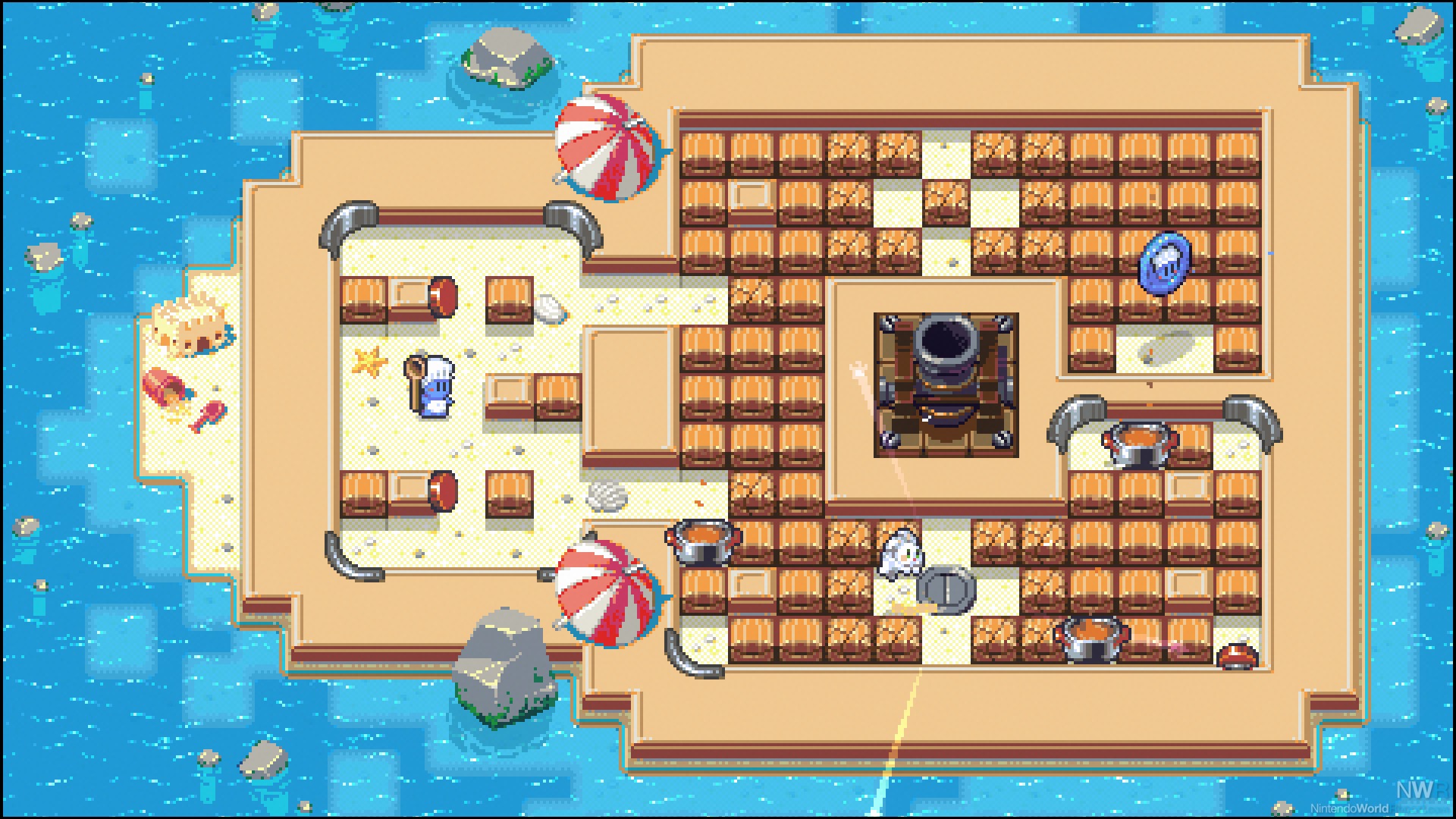 With a 16-bit, pixelated art style, Radical Rabbit Stew looks great while pumping out a soundtrack that keeps the excitement and action moving throughout the entire experience. Beyond just looking and sounding good, the controls are also tight, with the most minor of issues coming in a lack of speed for the protagonist at times.

It’s important to note, if you aren’t someone who enjoys the arcade action and puzzle-solving on offer from the start, this won’t be a game that improves for you over time. What you see is what you get, and Radical Rabbit Stew sticks to its basic formula to a fault. While perfect for the Nintendo Switch’s pick-up-and-play style, this one might need to be put down and returned to once in a while to keep it from getting bland on occasion. The only disappointing portion here comes in the boss fights, where a similar model is used in each fight. Things get tougher, faster, and more interesting, but you’re mostly doing the same thing to conclude each area.

Radical Rabbit Stew is a thoroughly enjoyable experience from top to bottom. From the arcade, slapstick action of punting rabbits into bowls of soup, to the thought-provoking map puzzles, this action-puzzler offers a unique and interesting take on the genre, even with the sometimes repetitive nature, and boss fights that utilize overly similar ideas from world to world.