An excellent game hampered by a lackluster port.

Every now and then, a game comes along seemingly out of nowhere to blow you away. While CrossCode from developer Radical Fish Games has been critically adored since before its 2018 PC release, I was still struck by how smart, polished, and fun this SNES-inspired action RPG is as I play it on Nintendo Switch. Part of that might have to do with its development history. After being crowdfunded in 2015, CrossCode was in Early Access for three years before its official release, allowing the game to be iterated on and refined into an extremely smooth experience. Everything that shone so brightly in the original game is apparent on Switch, whether it’s the approachable yet complex combat, deep quest system, or clever puzzles. If it weren’t for the frequent slowdown and audio hiccups, CrossCode on Switch would be one of the best games on the system in 2020. 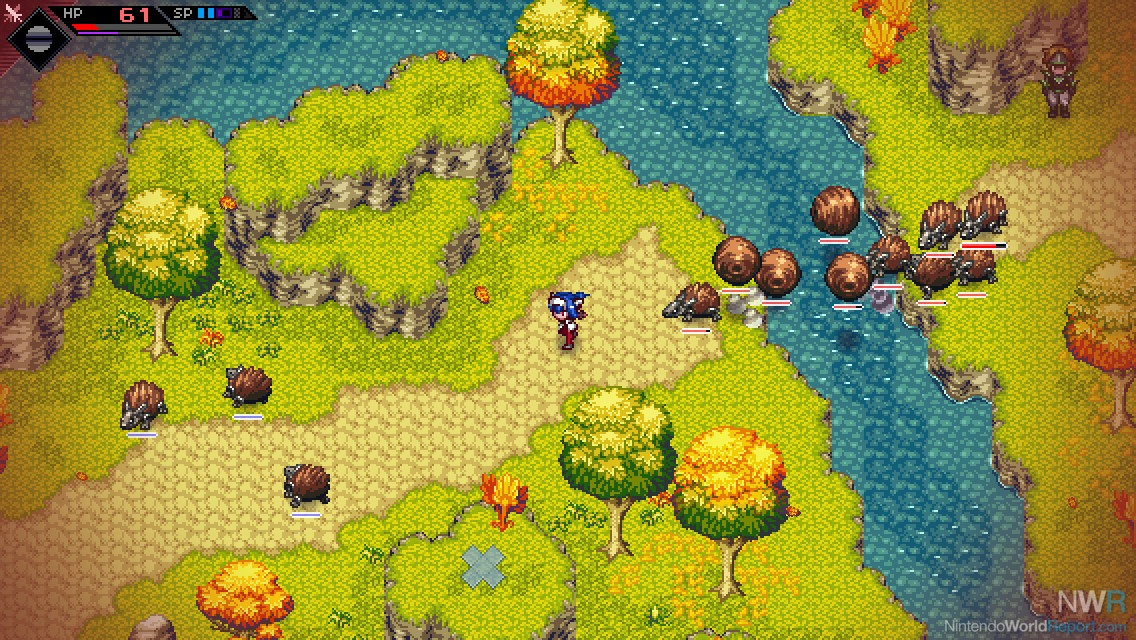 It’s a little hard to narrow down just what exactly CrossCode is. Combat is reminiscent of SNES-era Mana games, but the firmly sci-fi vibe adds in some differences. You can smash up enemies with melee attacks or make use of ranged projectiles to damage your foes from afar. A detailed skill tree lets you add special abilities and a plethora of buffs and boosts. You can even effortlessly swap between different skill loadouts if you want to experiment. The combat isn’t mind-blowing, but it’s flexible to such a high degree that it remains fun to get into combat with generic enemies or sizable bosses.

One element that doesn’t land for me is the combo system. Fighting enemies in rapid succession fills up a meter that can have your combat “rank up.” Defeating enemies while at higher ranks can lead to rare item drops, but if you don’t keep fighting enemies, your rank will reset. It runs counter to how the game emphasizes exploration and puzzle-solving. Though, my dislike of this system helps to prop up CrossCode’s simple yet effective difficulty options. On the whole, this is meant to be a hard game. At its default setting, you have to be quick about solving puzzles and aggressively smart in combat. Three options let you slow down the puzzles, limit the damage you take, and reduce the attack rate of enemies. They all can be separately turned down or up at any point, letting the game retain its well-balanced challenge while limiting frustration. 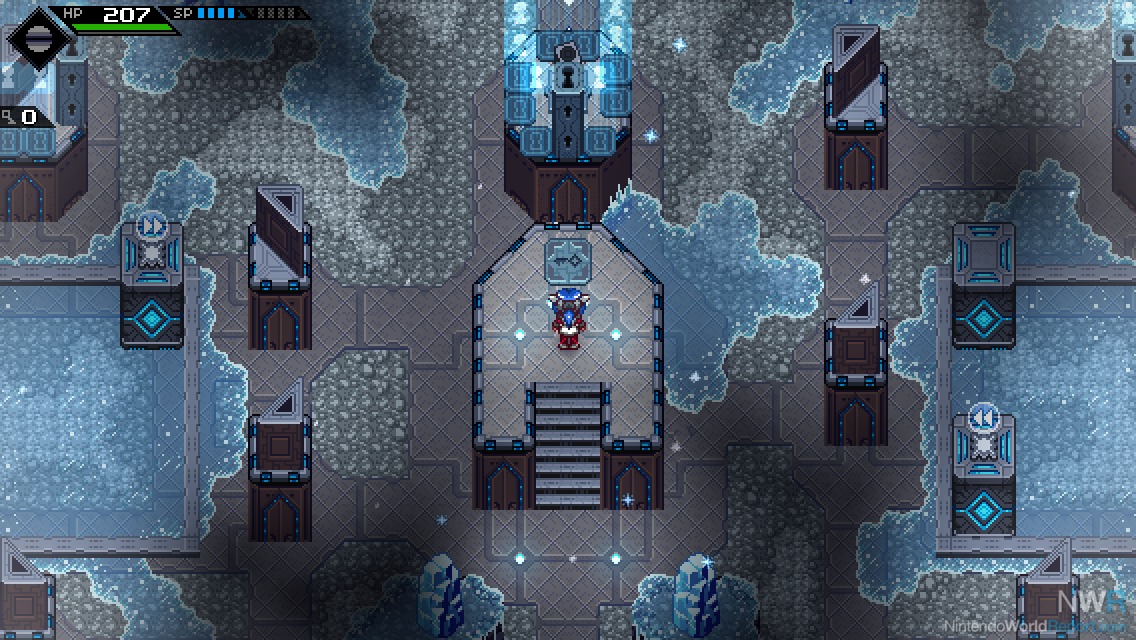 The exploration is tied heavily into the robust quest system. Every region has a load of quests that run the gamut from defeating certain enemies to finding specific items. A lot of them amount to fetch quests, but enough go beyond simple collection. Specifically, challenging Elite Quests add a stiff challenge with harder foes and more complex puzzles. The ease of gathering quests and finishing them is increased by the detailed quest menu, giving you all the info you need for a given task. Unfortunately in the Switch version, entering the quest menu routinely takes a while to load. Early on, I thought I crashed the game when entering the quest menu because it took so long to display. This problem isn’t limited to just the quest menu, but basically every single menu. It’s sluggish to look at your character’s skill tree or the detailed in-game research tab. Further compounding these technical issues, audio sometimes just dropped out during gameplay and a few times, audio would glitch and repeat notes when I returned to the game after my Switch had been in sleep mode.

CrossCode’s marketing often calls out the game’s dungeons and puzzles as “Zelda-esque,” which is apt. The key to a lot of the dungeons are your projectiles, which can be bounced and ricocheted off of walls to flip switches and hit enemies. Dungeons, as well as the overworld, have a ton of verticality, which sometimes can be hard to judge from the top-down 2D perspective. The overall design of each area does a great job at making the terrain easier to read, though. Part of me wishes the dungeons evolved a little more than they do over the course of the adventure, but at the same time, CrossCode has so much else going on that the dungeons being a puzzle-centric respite from the action helps to keep the whole game more balanced and consistently enjoyable. 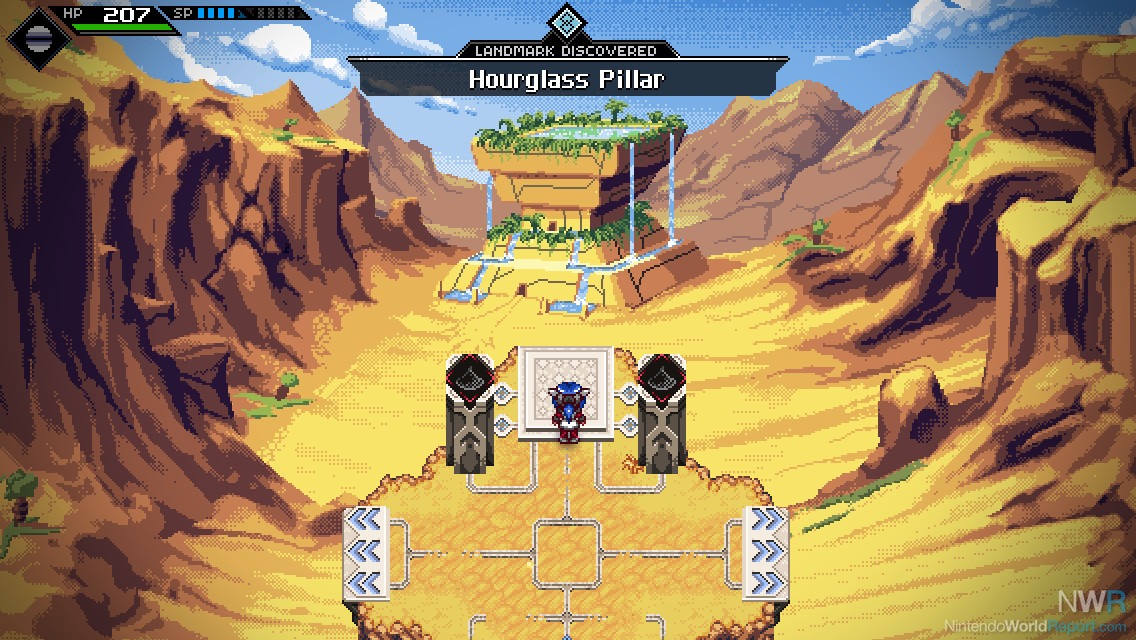 The story takes a little while to get going, as initially you’re dropped into the CrossWorlds MMO as Lea, a mute, amnesiac avatar. Things aren’t as they seem with your heroine and over the course of the first dozen hours, the full scope of the narrative takes shape. The back half is strong, but requires a significant amount of setup before you get to the good stuff. A good mystery is laid out early on and the payoff is overall worthwhile even if the 30+ hour tale might be a tiny bit on the long side.

Helping out the heavy lifting of the plot is the resplendent aural and visual presentation. The sprite-based visuals look gorgeous, especially as you see all of the game’s different environments. The soundtrack is impressive, adding to the feel and look of the world while also evoking the clear ‘90s-era video game inspirations. This makes the consistent audio glitches in the Switch port more frustrating because they take away from an exemplary part of CrossCode. 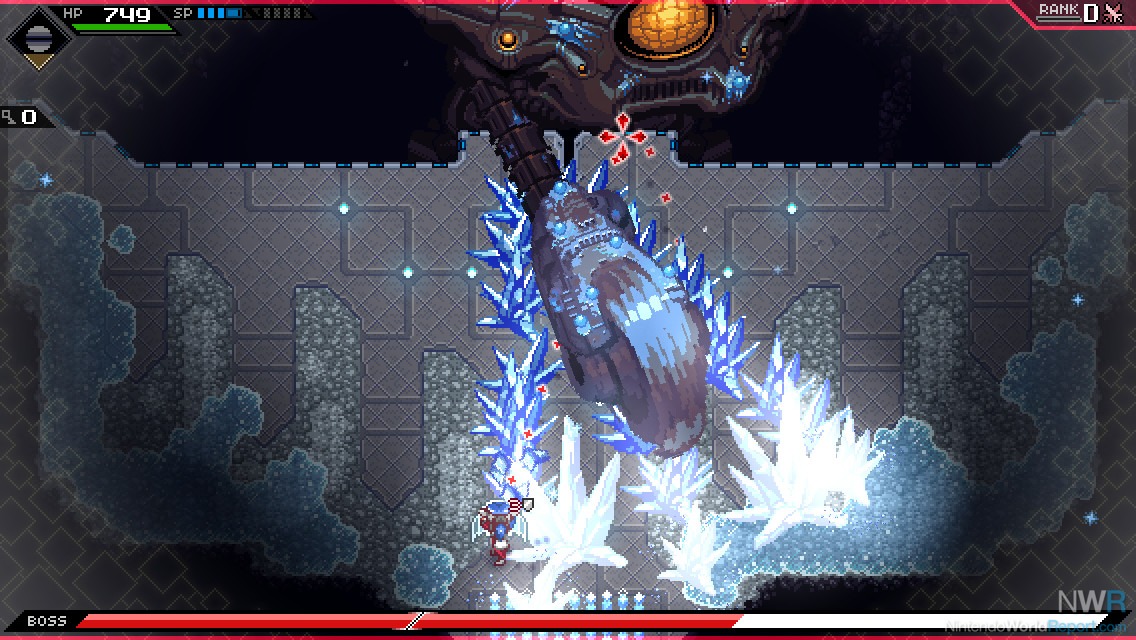 While CrossCode is a superlatively excellent game, the Switch version is an astoundingly rough port. That said, the game is worthy of your time, even in this compromised version. While I can’t speak to the other console ports (due out the same day as the Switch release; the Xbox version will be on GamePass), the PC version is clearly better. If you can play CrossCode on PC, I advise you do that unless you desperately crave a handheld experience. A lot could be salvaged from this middling port of a stellar game with some of the same refinements and polish that made this crowdfunded gem so exceptional. As it stands, CrossCode gets a high recommendation from me with some slow, glitchy caveats.