You cannot g’wasp how good this game is. Bee-lieve me

I won’t beat around the bush here: Bug Fables: The Everlasting Sapling is a spiritual successor to the old-school Paper Mario games, complete with turn-based combat and action commands. Developer Moonsprout Games clearly missed the style of Paper Mario: The Thousand-Year Door and wanted to make their own adventure in that game’s image. Paper Mario inspiration aside, if you are looking to spend over 30 hours with charming characters, a delightful combat system, and a nuanced story in a colorful world, or if you just want to try something fun and new, then I cannot recommend Bug Fables enough.

Bug Fables takes players on a ride through a vibrant cel-shaded world that heavily utilizes bold black lines, enforcing a hand-drawn aesthetic. It’s not looking to blow your socks off in the graphics department by any means, but it does employ a simple, and stylized look that gives it an identity and an innocent feeling. Utilizing 2D characters in a 3D environment isn’t a new concept, but the charming effect is used in a way that makes the world feel real. The character designs for the most part are very strong. A wealth of unique critters pop up along the way in the long journey through Bugaria. Not all are the most memorable, in fact some of the designs I found started to bleed together. This was largely in part to some of their silhouettes and color schemes being very similar. That said, a lot of characters have really terrific designs that range from shady edgelord mosquitos to priestess praying mantis. Most importantly, the three lead characters, Kabbu, Vi, and Leif (also called Team Snakemouth when all together) look fantastic, and each have a large part to play in the story. The soundtrack is a very nice listen, using synthetic sounds of instruments and while it wasn’t always my focus, there are several recurrent points where the music really added to the adventure. Was the fight I was in after a plot twist? Then the music definitely was upbeat, high pitched, and exploding with tension. Was I in a new town that was bustling with activity? Then I was given a lovely ambiance that promoted the world I was in. 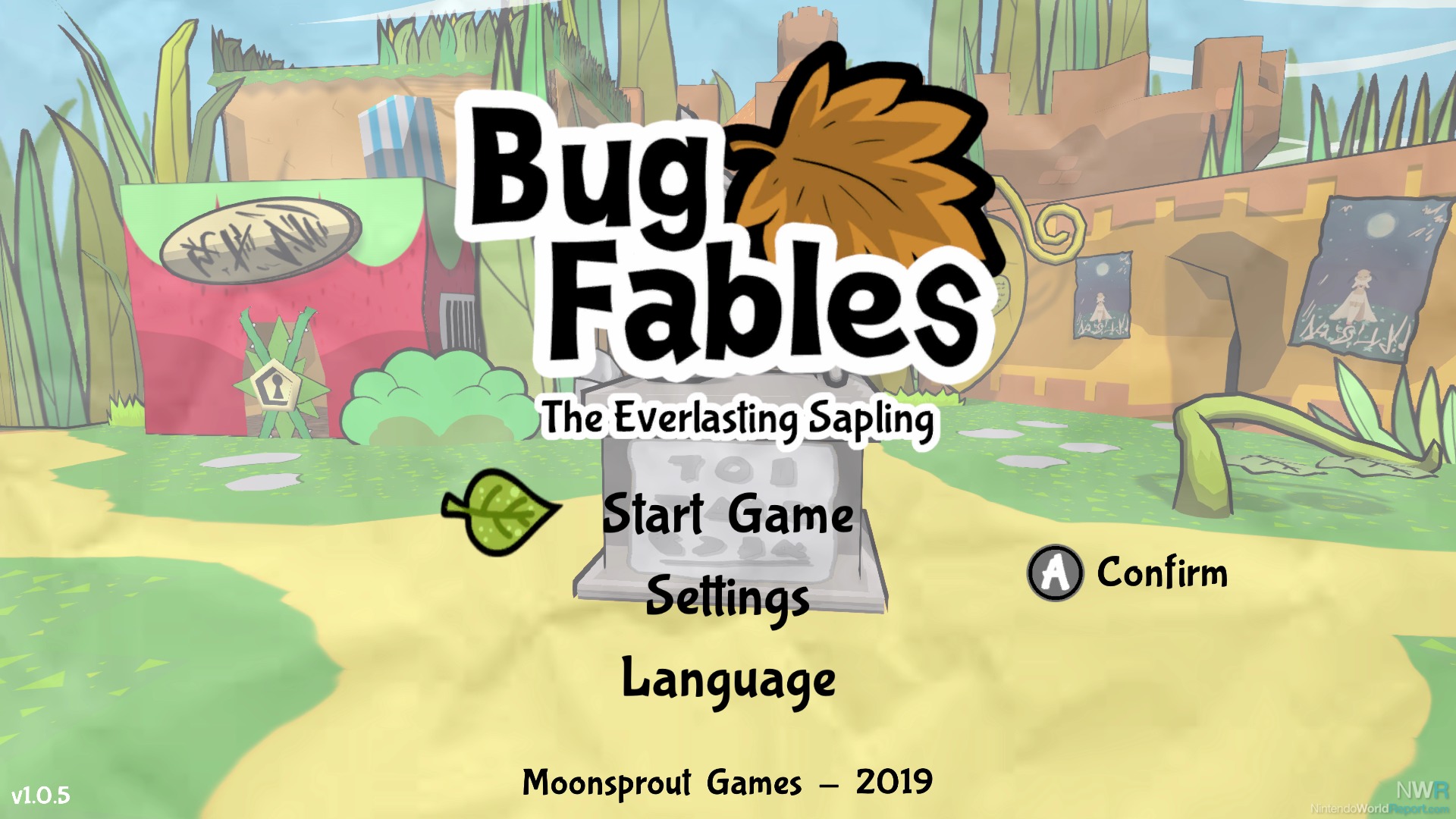 The turn-based, interactive combat has the player controlling Kabbu the beetle, Vi the bee, and Leif the moth by having them take turns when fighting enemies. You can swap their positions on the field, the turn order, and even donate a turn to another party member, with the trade off being that the attack will be slightly lowered for that turn. There is a lot of room to strategize, and I found it to be pretty intuitive, with the caveat that I have seen this battle system before with less customization. A neat aspect of fighting enemies is how the interactive elements tie in. Attacking an enemy will yield more damage when completing quick timing-based prompts. These surprisingly tripped me up more times than I expected, as the window for error is pretty quick. But I really appreciated the challenge, and it kept my attention for long stretches when I know in the past, I often found myself going on auto-pilot in the combat portions of RPG’s. You can also power up your party by equipping medals that have all kinds of perks to them. The loop of combat and rewards is very transparent: beat an enemy, obtain points, spend points after leveling up to upgrade your health, your magic, or your slots for medals. While simple, it is a very effective incentive, especially when it comes time to take on the boss. 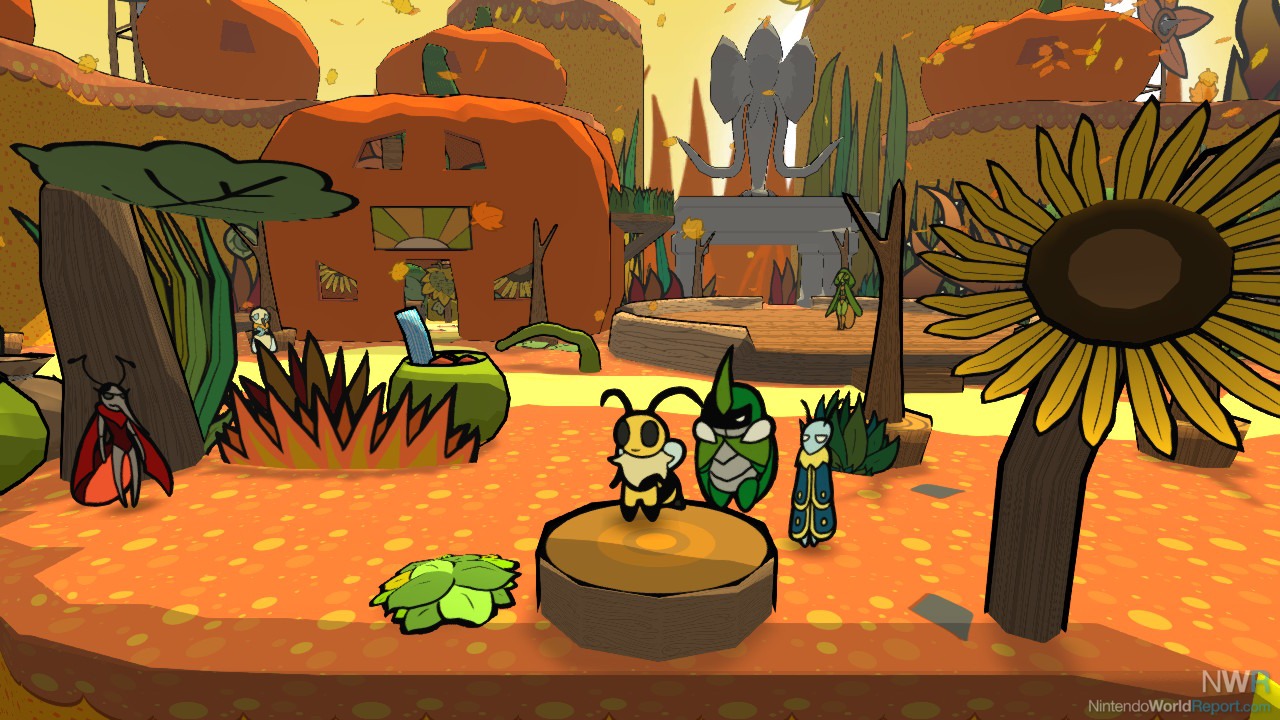 The setup of where the adventure begins is fairly straightforward. The promise of eternal life lingers across the land, and the daughter of a recently deceased ant queen is searching for it. She hires explorers to find any information on this mystical object, and wouldn’t ya know it, our three plucky heroes get swept up in the whole ordeal. While it’s not breaking new ground in terms of storytelling, Bug Fables simultaneously weaves together an interesting mystery, a cute comedy, and a surprisingly nuanced tale with characters that each have their own arcs of personal growth. There is a lot of dialogue to be read, many of which is optional. You can press minus at any time to have your party talk about the area they are in, or the NPC they are adjacent to. Each party member also has their own specific dialogue for every enemy in the game. And of course there is the dialogue that comes with pursuing the campaign. You could easily call this game chatty given the sheer scope of words to read, but so much of it is a treat to discover. The characters are written with remarkable chemistry and each have a distinct “voice” in the writing that I was going out of my way to read the explanations of different areas, enemies, and side characters. It’s not complete fluff, there are even books of lore that give more context to the world’s characters and some of their connections to one another. Or, you absolutely can choose to go right through and avoid all of this, and still have a pleasant time with the main story. This tale is welcome for players of any age. 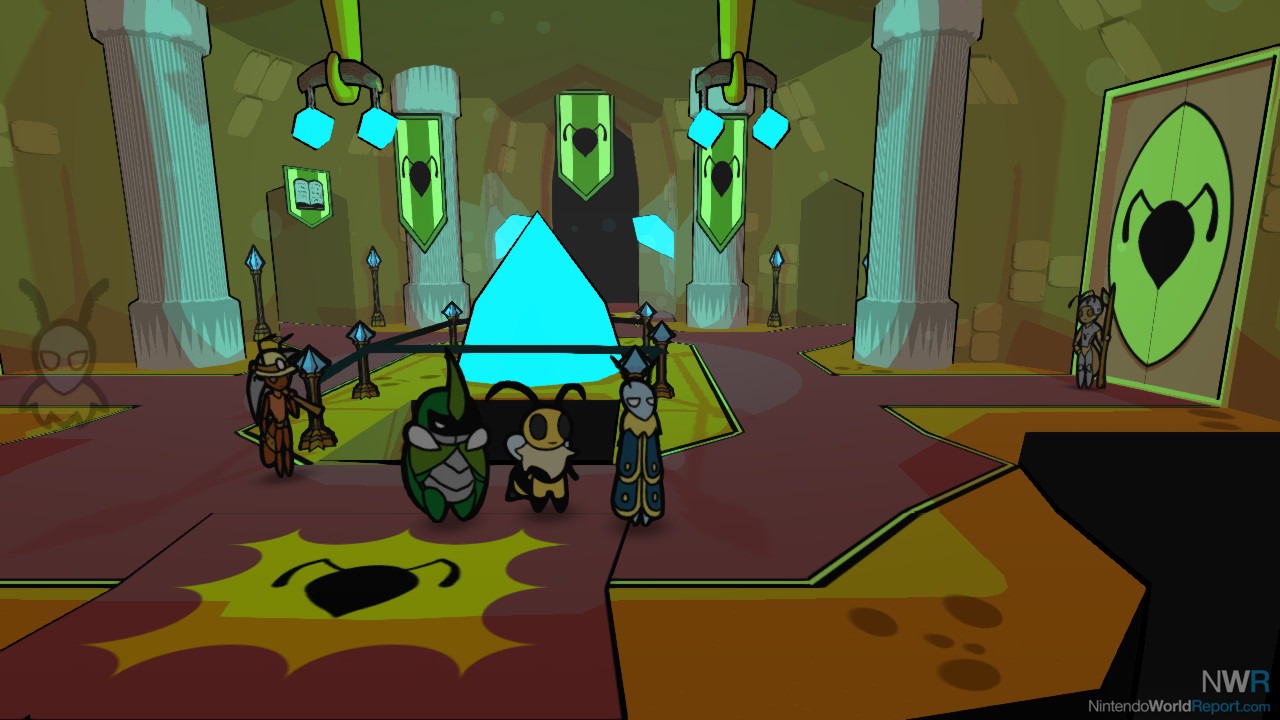 Speaking of, a remarkably small detail that changes the entire experience is the inclusion of a literal “Hard Mode” upgrade that costs nothing to obtain or use, but will dramatically increase the difficulty for players seeking a challenge. The enemies fought will be considerably harder, but the rewards for pursuing this challenge are bountiful to say the least. And, this mode can be turned off at any time, which allows for the option of an already decently designed challenge, to something much harder. I’m not kidding: some of the bosses are downright diabolical. But even though they were very hard to beat, I rarely felt like I was unsure if I was capable. When losing to a boss, you’re immediately given the option to retry the fight, reconfigure the party and then retry, or reload from the last save point. This option became a thematic gameplay concept in that I felt that throughout my adventure with Team Snakemouth, my time was very respected. For the most past, I rarely ever found myself backtracking through previously explored areas, or needing to grind for hours upon end. Each area serves a purpose. The only instance of this not being the case is the structure around saving. There is no auto save, so if you die whilst out in the field, you are sent back to the last time you saved, unless it is an aforementioned boss fight, in which you are thankfully prompted with a retry option. The saving system is not bad. It works completely fine, but does feel slightly archaic. I found a feeling of paranoia in that I constantly was returning to my last encountered save point, ensuring I wouldn’t lose the progress from my exploration and fights. Auto-saving would be appreciated, at the risk of depleting the challenge, which I suspect may be a divisive topic amongst players. For me, I want to play through the game and see what it has to offer, while also enjoying the challenge. Others may really like the high tension of not losing a fight in fear of losing progress. I’m not knocking Bug Fables for that, but I think it is worth bringing up. 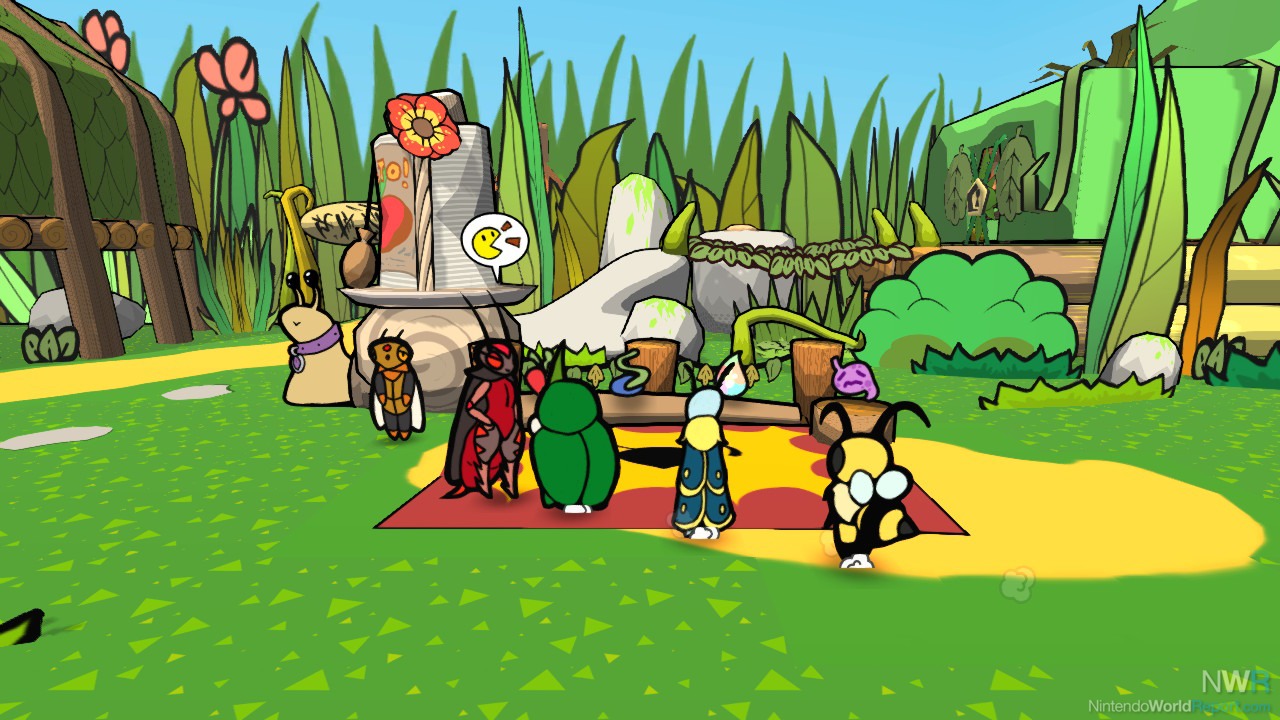 Combat and story aside, Bug Fables takes a hefty stab at providing optional content that extends the adventure in meaningful ways. There are a boatload of side quests that more or less amount to many being fetch quests, whilst others took me down roads I was certainly not prepared to go down as deep as I did, but still enjoyed thoroughly. Collectibles are strewn around the world that can be used to add to your party’s strength or the lore of Bugaria. There’s even a pseudo-card game that takes advantage of using the optional dialogue that Team Snakemouth will give when spying on an enemy's stats in battle. A meaty experience is present here and while it’s certainly not needed because the main campaign is already great, everything here is really appreciated. I wanted to spend more time in this world, and I didn’t want it to be just walking around looking for overworld enemies to squash so I could level up. I wanted more meaningful content that let me spend time with the characters while also engaging in the fun combat system, and that is what Bug Fables delivers on. 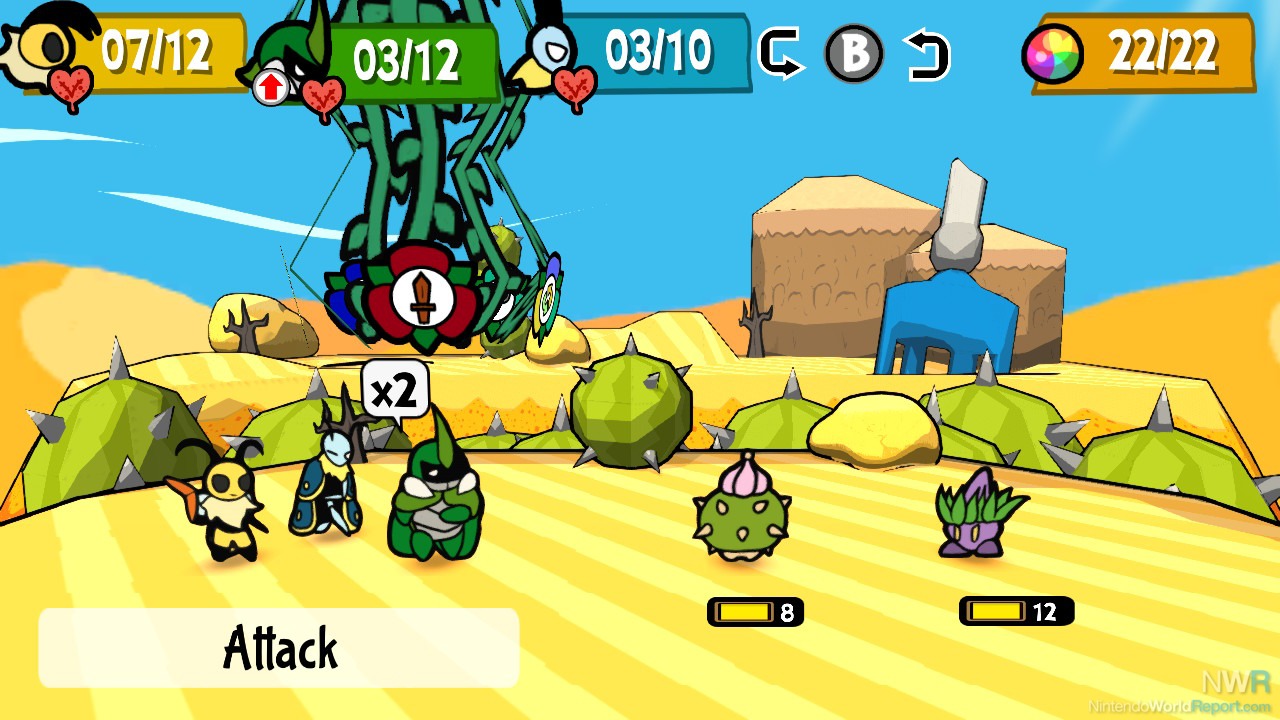 For me, Bug Fables has two different flaws, that are nowhere near experience ruining. They’re just shy of being bigger nitpicks if anything. The first is that there is a lot more platforming in the world of Bugaria than anticipated. And it’s not like the platforming is bad, but it’s definitely less intuitive than anything else in the game. Solving the platforming puzzles is pretty easy, save a few needing more than a minute of brainstorming a solution. But the jumping can feel sort of awkward, and sometimes I would wonder if the solution I came up with was actually possible because it didn’t feel natural to accomplish. Vi’s ability to throw her boomerang is pretty finicky and often took me more than one try to align properly. Pushing an ice block to a certain point just felt weird at times, because this world is so stylized’ it felt a little unnatural. I liked there being platforming and puzzles, I just think they could use a little more finetuning. The other slight issue I found was with the overworld enemies. You can equip a badge to run right through the weaker ones, avoiding the entire combat sequence altogether. But sometimes, this would happen even in new areas, with enemies I had never fought before. There were also fights that were considerably difficult for me to complete, that left me with very little experience points earned, and vice versa, there were other fights that were very easy that overflowed with experience points. Again, not a huge problem, just another awkward one, where I think balancing is a slight issue. 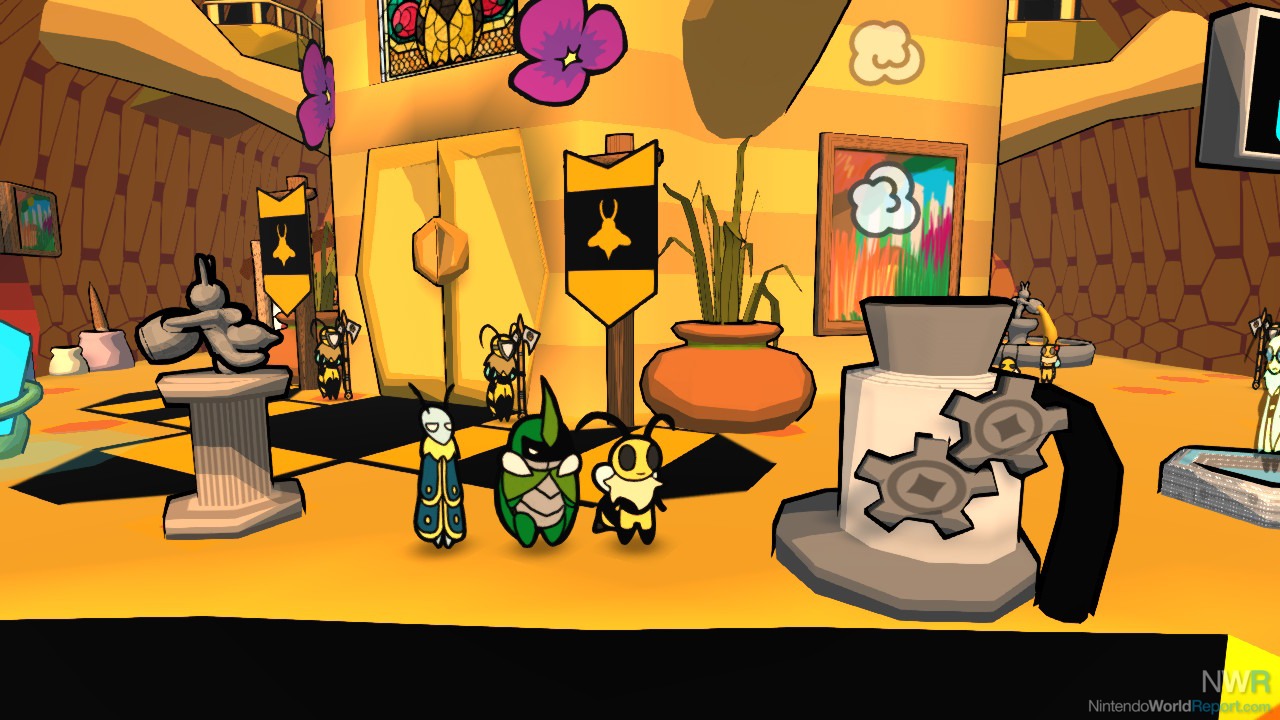 At the end of the day, Bug Fables is wearing its inspirations proudly on it’s sleeve, and still adding on its own experiences that are both meaningful and fun for players. I had a blast with this game, and I highly recommend it to all kinds of players, whether they be looking to dive into a fun story with lovable characters, trying a more tangible, interactive combat-focused game, or just attempting a challenge. Bug Fables does not pull its punches, especially in it’s hard mode, but it gives such bountiful rewards, that I am simply left having to return the favor.

I really do hope that someone at Intelligent Systems gets to play and enjoy this game.

I really do hope that someone at Intelligent Systems gets to play and enjoy this game.

I hope so! I think there might some discussion around who is in charge though, and if it's the direction the higher ups want.