If you have played Lab Zero Games’s previous title, Skullgirls, you know that the studio has a track record for delivering visually stunning games with unique character designs. Indivisible, their second title, retains beautiful graphics and interesting characters but switches out a 2D-fighter for a cross between a real-time RPG and a Metroidvania. Does Indivisible show that Lab Zero Games is more than just a fighting game developer?

Ajna is a young girl out for revenge after the evil warlord Ravannavar gives out the order to kill her father and burns her village to the ground. Ajna survives the attack and uses her fighting skills to make her way to his fortress to kill him. Along the way she discovers that she has ancient powers that allows her to absorb other fighters into her head. These characters can fight alongside Ajna in the real-time battles and aid her on her quest to not only find vengeance but discover her own place in the world as well. 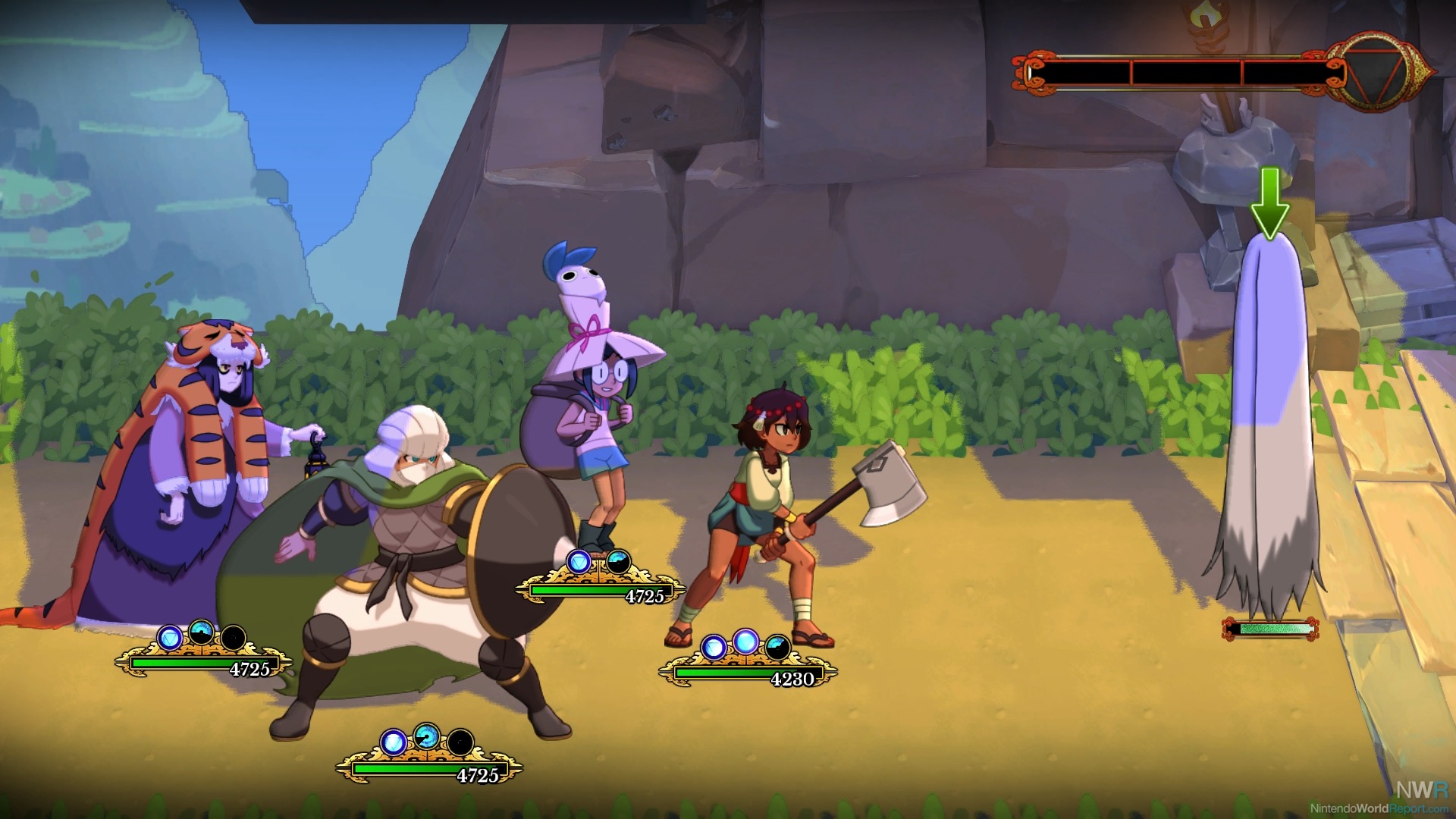 The most striking thing about Indivisible is its incredible production design, world and characters. The style of the game is absolutely gorgeous, with hand drawn art, animations and some incredible locations. From a sandy desert to a flying fortress, there is a lot of variety here in the world. That also goes for the group of characters you collect along the way. Each character has unique attack, capabilities and his or her own story to tell. In cutscenes the characters are all voiced with charming and captivating voice acting. I especially liked the characters of Razmi, a goth-witch who would rather burn everything to the ground and ask questions later, and Thorani, a magic healer who uses water to aid in battle. Each character comes from a diverse background and doesn’t necessarily adhere to played out tropes. I feel certain that for every player out there, there is a character they can connect with. Though this huge number of characters also made me feel overwhelmed rather quickly. Having only a party of four characters means you will have to pick and choose who you will use in battle. Thankfully at any point during the game you can switch out fighters and try out new combinations of moves in combat.

The main gameplay of the title is divided into two segments. There’s the Metroidvania-like platforming in the overworld, where you use your movement and abilities to unlock paths forward and try to find hidden collectibles and characters. While you do have a good amount of options for movement, I did find the platforming to become rather stale after a while. The wall-jump and dash feel great, but the level design doesn’t feel particularly challenging or unique. You will be traversing diverse locations, but the layout does start to blend together after a while. Having to hit blocks to make platforms appear and using tools like bomb-arrows to break open pathways in order to progress. The secondary gameplay consists of combat encounters. When you are engaging an enemy, the battles start automatically in the same place as the overworld. Characters are controlled by their button positions respectively. Attacks need to charge before they can be used but can easily be chained together by using multiple characters at once. At first this combat system felt a bit slow and overwhelming. I felt like this particularly had to do with the first fighters that joined the party. But since there isn’t a ‘core’ group to the fighters in Indivisible, you can freely swap to characters that adhere more to your personal playstyle. Enemy attacks can also be blocked by timing your button presses correctly and you even gain access to a strong attack, which can be used by any character to deal massive damage or restore health to the party. 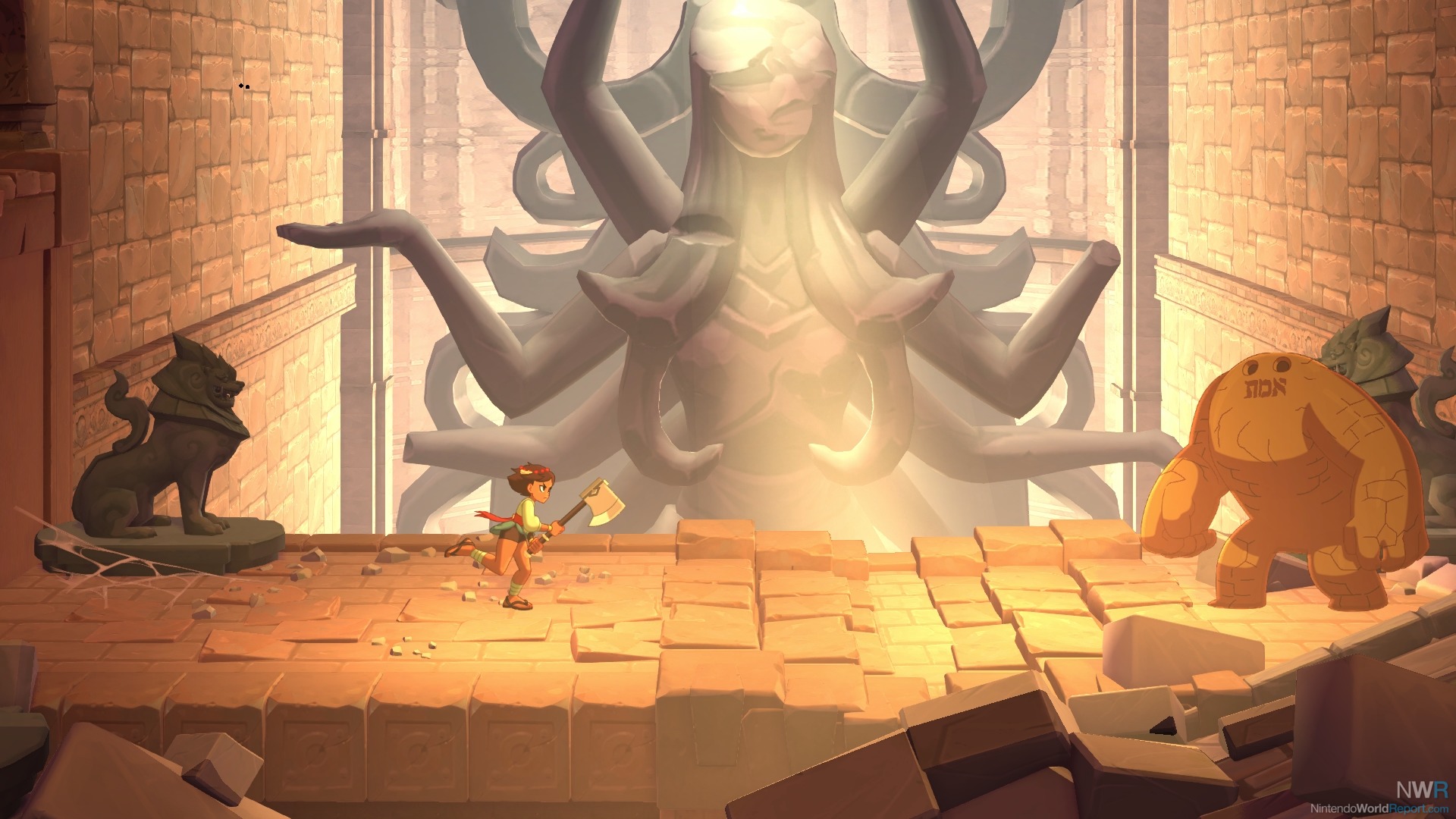 My main problem while playing Indivisible is that the pacing of the game did feel rather off. It’s hard to describe, but the gameplay does become rather repetitive when it needs to balance both the combat and platforming. Enemies feel like obstacles, but because of the turn-based combat it feels like the game is slamming hard on the breaks whenever you engage enemies. This meant that when I was playing long sessions of the game I got bored rather quickly. Luckily there are a ton of save points and you are even able to switch to any previous save point at any time. This means that you can easily play the game in short bursts, which felt to me like a great way to play indivisible. There is also a good amount of places to explore and a ton of characters to find. The game performs great on Switch in both docked and handheld mode. The developers have already announced that an update will be released in the near future that will add a framerate toggle option, 1080 docked support and some performance updates.

Indivisible is a game unlike many others. While combining both platforming and exploration with a real-time RPG combat system didn’t always keep my interest, the game has an unique style and engaging characters that did keep me coming back. I do feel that this game is more for those looking for an RPG rather than a Metroidvania, due to its slower pace and its ‘interrupting’ combat system. But it’s the characters, music, art-style and worldbuilding that make it truly stand out from other RPG’s. Whether it will become a classic like RPG’s of old remains to be seen. But Lab Zero Games has shown that they are more than capable of bringing their unique talents to genres other than 2D-fighters and I cannot wait to see what is coming next.