A fantastical journey that repeats itself too often.

Pushing towards the unknown is a facet of human DNA—something that we have been driven towards throughout our history. There have been prominent faces who have taken up this cause, all journeying for fame, fortune, and discovery. Curious Expedition, an expedition simulator, has you becoming one of those individuals as you compete with rival explorers in a fight to see who is the top member of the Explorer’s Club. Between the management of resources, staggering random encounters, and tough choices, this strategy-adventure offers an experience that could be compared to a non-linear Oregon Trail, just with more difficulty and less satisfaction. 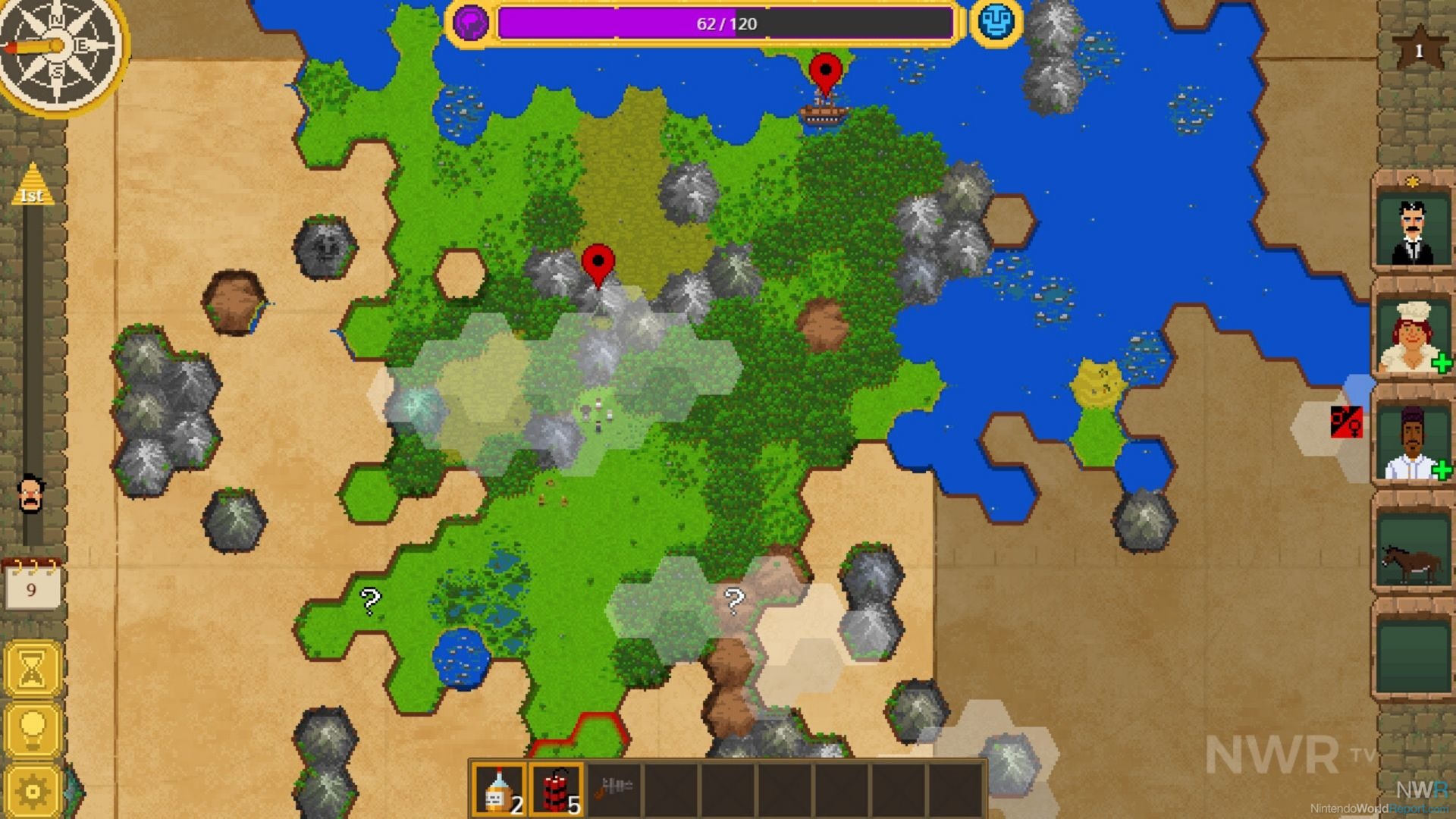 As a member of the esteemed Explorer’s Club, your cohorts have decided to have a good ole’ competition. They want to see who can travel around the world and collect the most brilliant artifacts, taking into account speed and success, all while keeping their venturing party alive and well. This interesting premise feels similar in style to Around the World in Eighty Days, with the 19th-century charm and unbelievable sense of adventure. Taking on the African safari, bitter cold of the Antarctic, and jungles of South America will all be a part of your story, but unfortunately, the tale grows stale fast as a lack of diversity in the storytelling makes for lost replayability in a roguelike built on the premise of repeated playthroughs. Each run consists of saving a lost wife or deserted soldier, with animal attacks and more happening nearly every time you venture out. Also, regardless of the region you enter, your objective ends in you searching for a golden pyramid, with the same set of villages and caves to explore in-between. Only minor details change between each area of interest you explore.

The majority of your time will be spent making mathematical decisions in order to keep your party going. Food and drink can be purchased and brought with you on these trips, which allow you to keep your sanity meter as high as possible. Running out of supplies while moving deeper into the unknown means your bar will begin to slip down with each movement forward. After you hit rock bottom, your party will begin to turn on each other in some gruesome ways, which will hamper your ability to reach the objective. Other than food, items like rope, torches, and machetes can be gathered to allow for easier navigation of the environment or to be used in random encounters. Keeping your equipment well-stocked is crucial, as tough decisions will have to be made in terms of letting some of those items go so you can carry treasures found on the journey. Encumbrance is an issue you cannot avoid. Fortunately, nothing about this system is difficult to manage, allowing for a more straight-forward gameplay loop, but where difficulty arises is when you have trouble finding the golden pyramid at the end of an excursion. 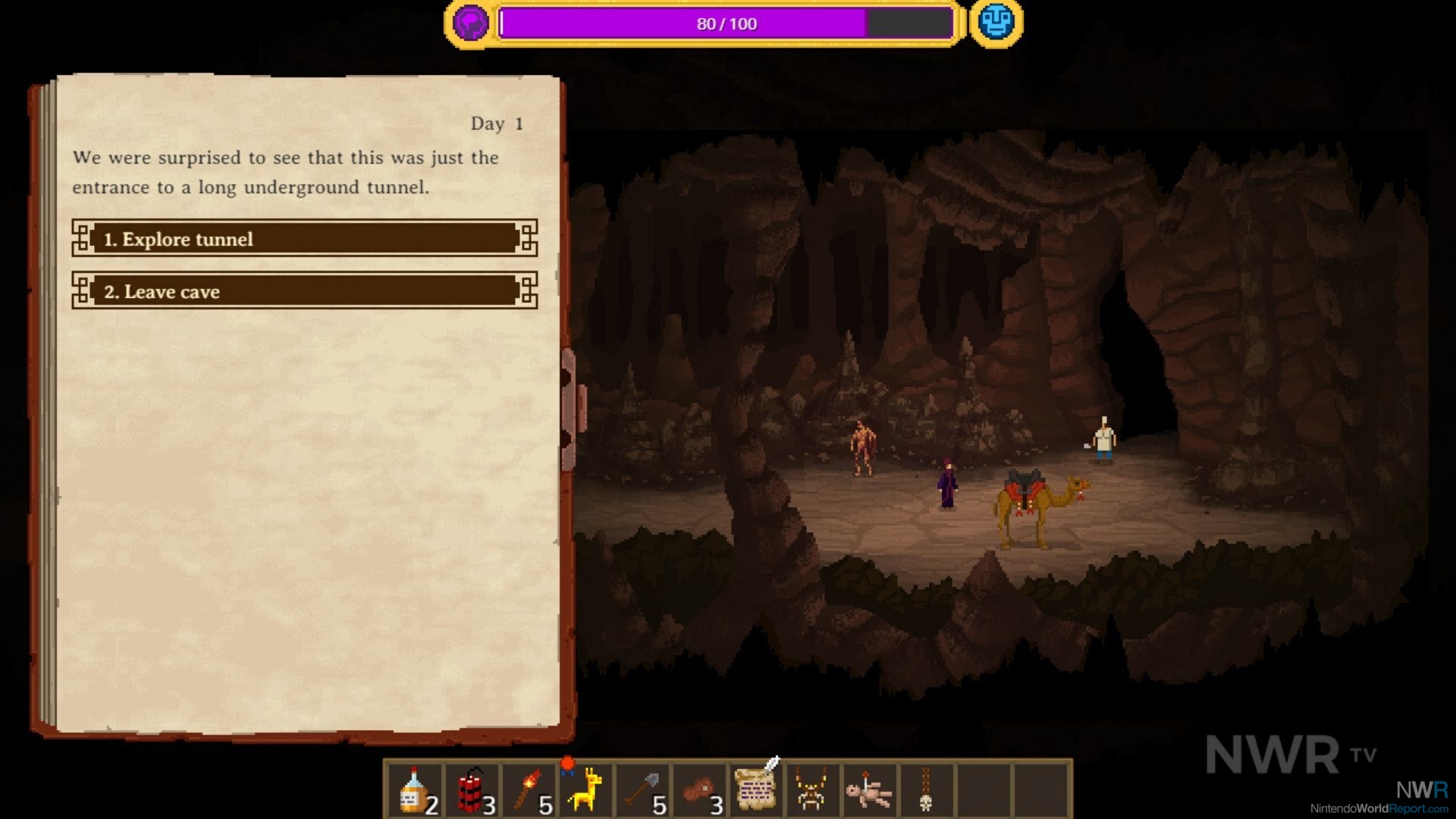 After landing on the shore of whatever land you have chosen to explore, you are presented with a hexagonal, randomly-generated grid to move through. Question marks pop up as you begin your adventure, signifying points of interest where treasure or traders can be found. The only other means with which you have to direct your journey is a compass that points in the general direction of the golden pyramid. This device is your friend and your worst enemy, as its accuracy is rather low most of the time. Once you are close to your goal, it starts to be helpful, but when you’re far away it can be tricky to use. Entering new regions can have your compass direct you in the exact opposite direction, even with the pyramid right in front of you. The randomness here is hard to measure and keep track of, which can extend a journey that is contingent on speed.

Once you complete an expedition, you return home and tally scores between yourself and rival explorers. Extra items and treasures found along the way can be sold to give yourself extra funds for the next journey or can be donated to increase your fame—the tool by which this competition is measured. As long as you’re expeditious, you can fairly easily maintain your first-place finishes, but as you move into the later stages of this six-part adventure, things will get more challenging.

Graphically, Curious Expedition boasts a simplistic pixel style. Based on the top-down perspective and board game style of gameplay, this isn’t something that will be a downside for most, but there isn’t a lot in the aesthetic department to really excite you. The music also follows suit with a rudimentary background soundtrack that fails to inspire on these grandiose adventures you are undertaking.

Curious Expedition is a unique experience that fails to live up to its inspirations. Lacking storytelling through areas that could have offered so much was seriously disappointing, as the gameplay loop offers mostly basic management and decision making that doesn’t keep you hooked. Repeated playthroughs are hindered by this as well, leaving this one feeling shallow and uninteresting.