Not really a god or a demon.

I’m a huge mark for mecha anime. I’m willing to forgive a lot sins in exchange for frenetic action, convoluted narrative, and astronomical destruction served with a side of moralizing. Daemon X Machina, serves all of the above but I still find myself wanting. It talks a lot without saying much, and while there is no lack of wanton destruction, it feels hollow. Daemon X Machina isn’t a bad game at all, and it will appeal to a certain audience, but most people will find the attraction limited.

Daemon X Machina is a spiritual successor of FromSoftware’s Armored Core series, featuring some of the same staff but now working at Marvelous’ First Studio. Fans of the long-absent mech customization series will feel instantly at home here. Daemon X Machina is all about constantly improving your mech, called Arsenals, and taking it into increasingly frenetic missions while wielding an ever-growing firepower. 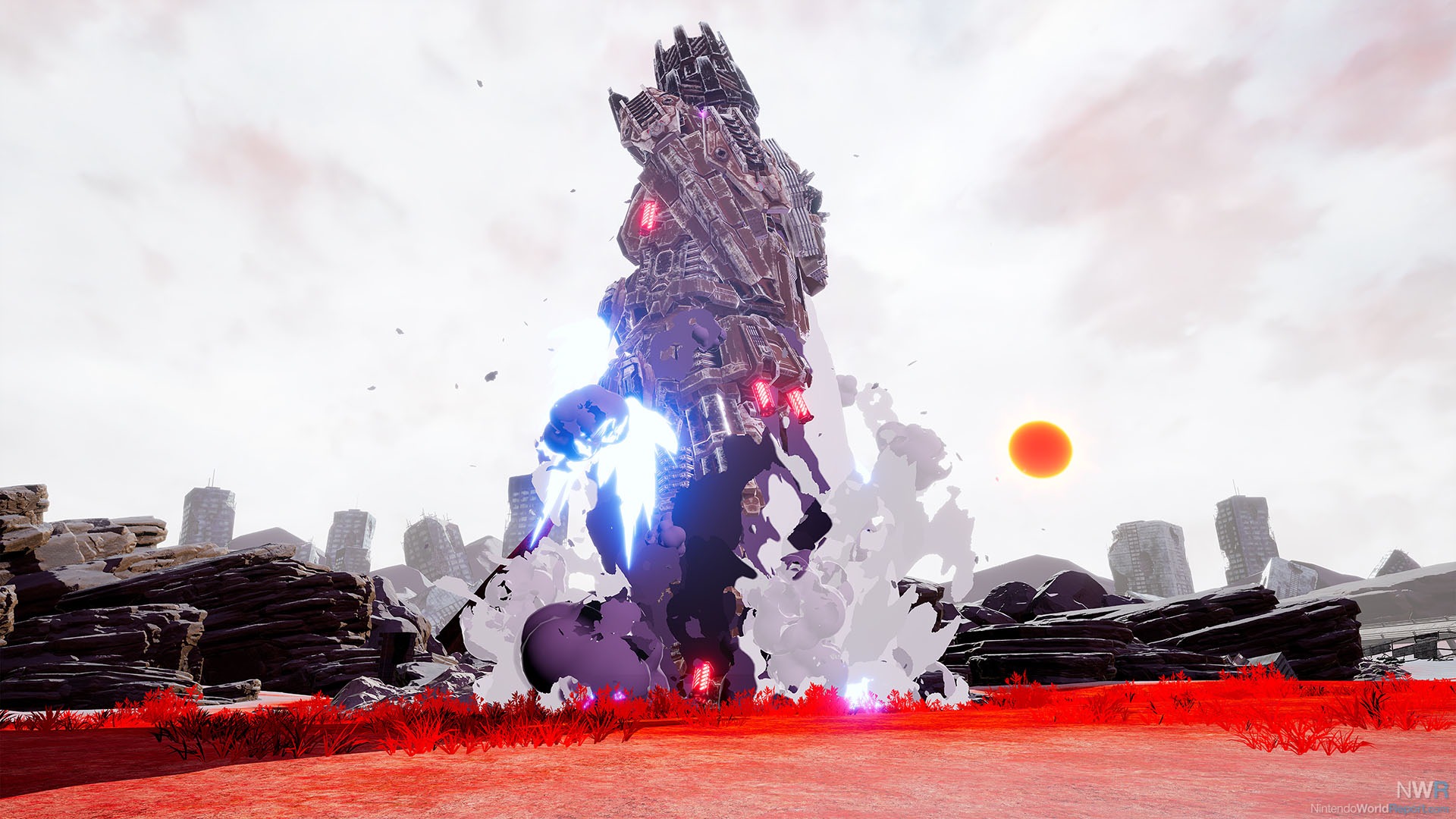 The parts and weapons selected allow the creation of a custom Arsenal to suit a wide variety of playstyles. Personally, I’ve built for speed and evasion. Your Arsenal is at home both on the ground and in the sky, and I leverage my boosters to move around my foes while hitting them with ranged weapons. I’d love to build for combat using energy swords, because I mean who wouldn’t, but I found they weren’t nearly impactful enough to justify it.

That’s where the customization so central to the game struggles. There’s some variety in weapon types, but it feels like at some point I plateaued. Most of the parts and weapons you get are harvested from fallen Arsenals, and while there is a store, it requires extensive engagement with a research system in order for there to be anything worth buying. At some point I just started finding parts and just selling them for cash. That cash can be leveraged to customize your pilot, known as an Outer, with various perks. It’s easily the most consistent way to spend money for upgrades, although it makes your intricately designed create-a-character look incredibly stupid with metal bits bolted all over.

The slow transformation of your Outer into a cyborg is thematically appropriate for the game’s story. Daemon X Machina takes place on a devastated Earth, following an event called the Moonfall - in which a chunk of the moon crashed into the planet’s surface. Seemingly as a consequence, AI all over the planet began to rebel against humanity. Especially evolved AI, known as Immortals, are seemingly able to corrupt the machines humanity built to protect itself and turn them against their creators. Humanity has an established a cordon around the crash site, and a trio of corporation-states hire mercenary Outers to protect their facilities from the Immortals and to shift the balance of power between the corporations as they extract valuable resources from the site of the moonfall.

The plot is mostly nonsense. It’s delivered in emails from the various powers, in conversations between mercenary Outers, or in briefings from your AI controller Four. There’s some really surreal dialog in this game, and most of the Outers are incredibly strange people. I would say I generally understand the parameters of the game’s story, but it often strays too close to unintelligibility. And yet, I felt some of the twists coming, which took away from the surprise. I do think it does a good job though with its cast of weirdos. I enjoyed learning about their backstories, even if it was often full of hand waving and weirdness. There’s something appealing about this cast of freaks rising to prominence in a broken world, especially in how they seem to have created a certain code of conduct that keeps combat from being personal. After all, for a mercenary, it’s just a job.

The combat took a lot of getting used to. Arsenals can fly, but they’re still giant robots and boost around a bit hazardously. Granted, there is some challenge in designing a third-person shooter with movement in three dimensions. After 50+ missions in I’m jetting around, and properly evading, but the introduction is rough. With no hard lock-on to fix motion to your target, most encounters are a constant balance of trying to keep targets lined up while also maneuvering around their fire. On the ground it’s a lot easier, to such a degree that I deliberately drew late-game foes to ground. The actual controls are complex, but with the number of weapons, abilities, and movement options this should be expected. They are customizable, and I strongly advise moving the up/down buttons so they’re not on completely different parts of the controller. 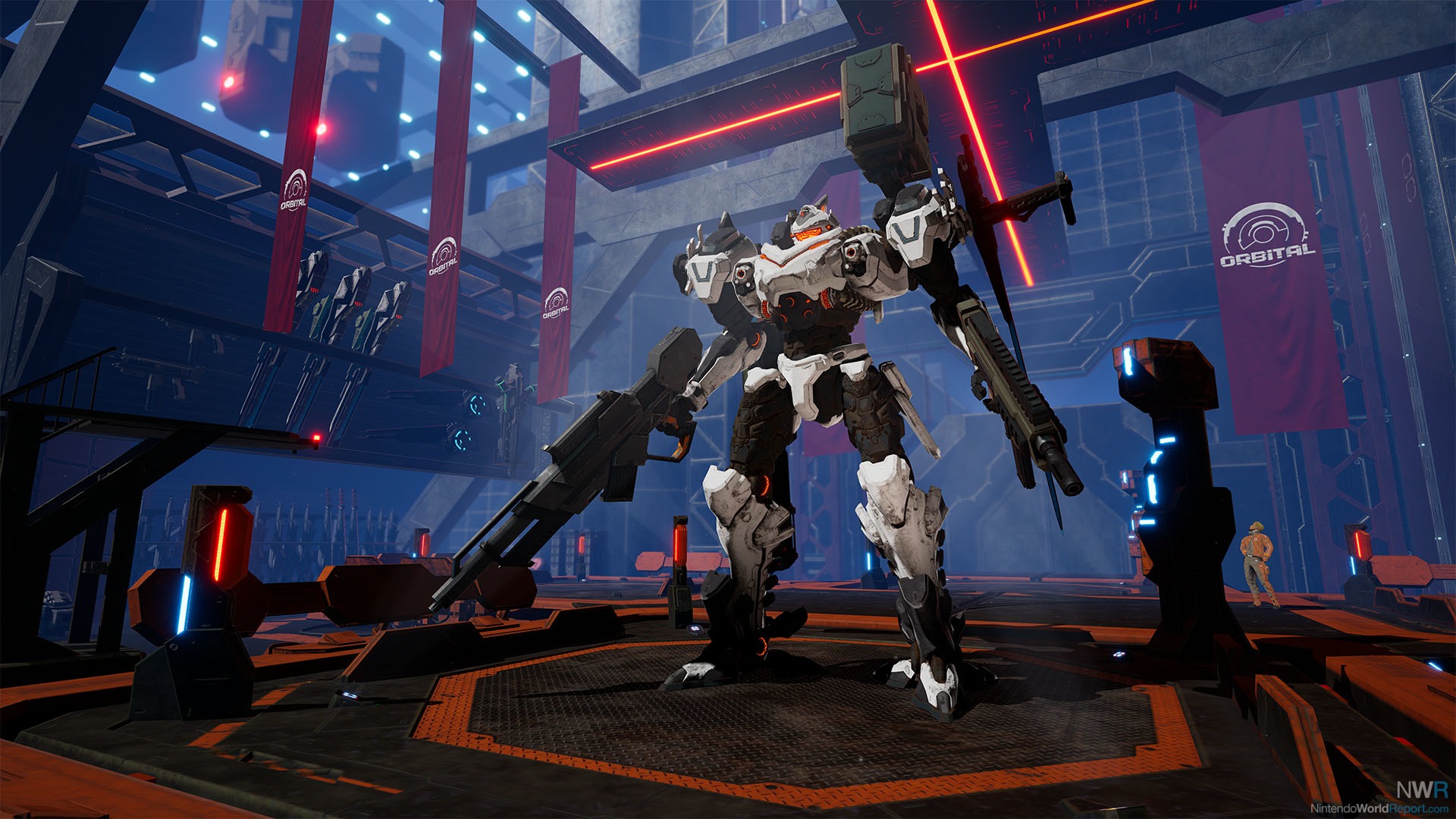 The encounters get a bit repetitive when you get over 50 missions. A great many just involve killing a lot of normal enemies, most of which go down in a single shot, until one or more enemy Arsenals show up. Sometimes this format takes place in an open space, other times it takes place indoors in a series of corridors. The highlights are the fights against Colossal Immortals, hulking foes that range from earth-shattering roots to giant aircraft bristling with firepower. Taking down these Colossals requires breaking off pieces of their armor to expose vulnerable spots, and slowly breaking down these giant enemies. There’s a great pleasure in literally disarming a twenty-storey tall robot,and slashing it with its own giant saber. These are by far the best encounters, but even they can run too long. I’ve had missions where the small enemies that exist only to provide ammo have run out, leaving my weapon empty. That sucks.

Missions focusing on 3-on-3 fights between Arsenals often times can feel like 1-on-3. Allied AI isn’t very good, and missions can devolve into you doing nearly all the work, while allies putter around and bark non-sequiturs. When they get shot down you can rescue them, but they don’t repay the favor. Most-of-the-time ally Johnny G once got shot down 20 seconds into a mission, and I have no idea how.

Failure is frustrating, because missions are often very short but restarting usually requires a lot of waiting for the game to load each of the two or three cutscenes at the start of a mission - just so you can skip them. Early game will often have you spending less than 10 minutes an hour in actual combat. If you have to re-load movies you don’t intend to watch or wait for the mission to actually start as you putter around the battlefield, the wait feels interminable. Checkpoints would have greatly improved the experience, something First Studio themselves recognized by including them in a single mission. 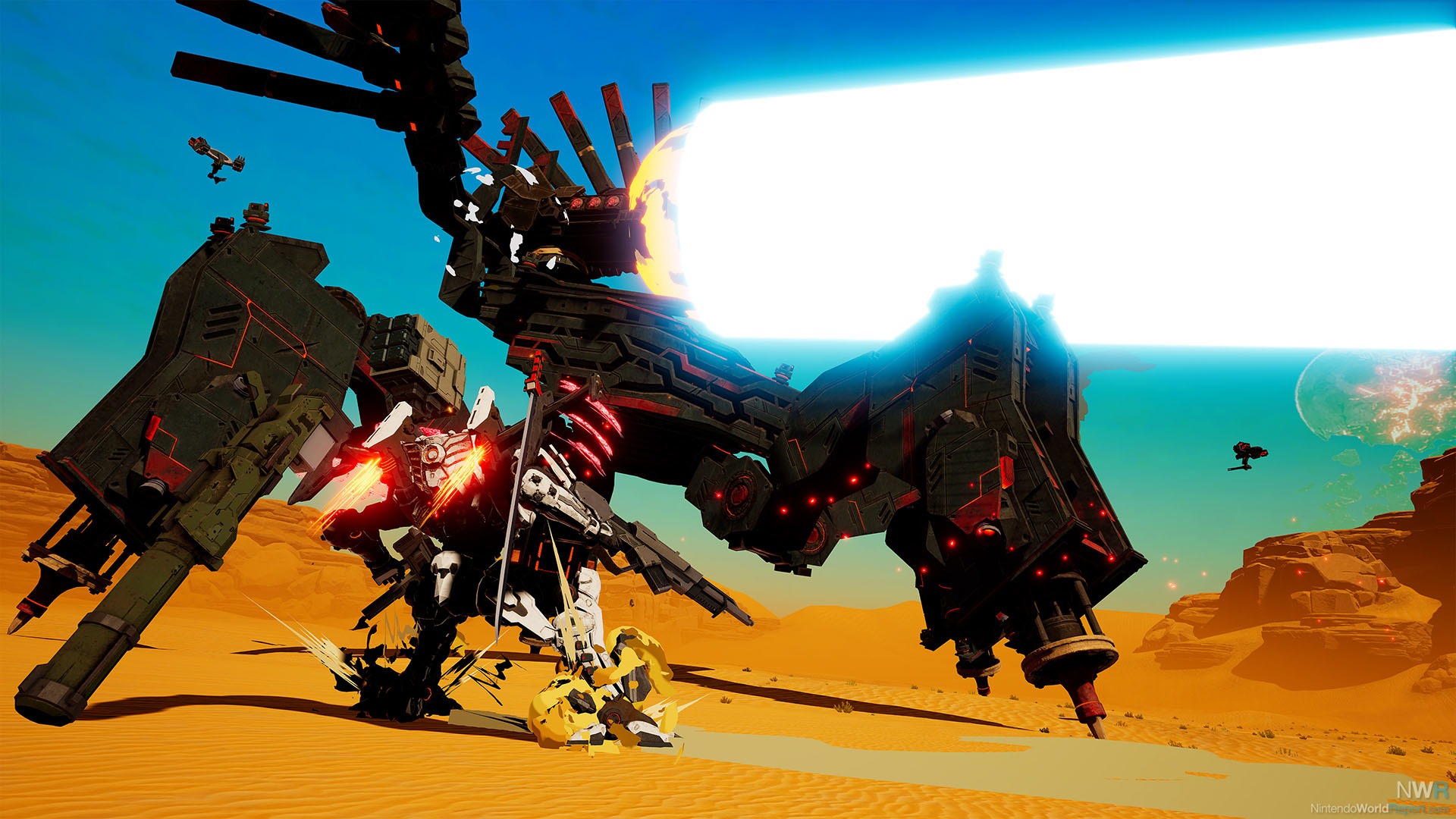 A multiplayer option is included, allowing you to take your custom Outer and Arsenal into a mission against a Colossal Immortal along with up to three others. Daan Koopman and I were able to run one of the multiplayer missions successfully, but the challenge doesn’t feel properly tuned. Even our end-game Arsenals were not able to deal enough damage to the bosses. Communication on Switch games is always a challenge, and that's true here as well. It does have a robust list of pre-scripted text and an in-game keyboard but during the frenetic fights of Daemon X Machina, you’re not going to have time to type.

Daemon X Machina looks really sharp. The harsh reds of a shattered Earth, and the flat colors of the game’s artstyle work well together. Everything looks right, even your deeply customized Outer and Arsenal. The character designs are intensely anime, and I say that with great reverence. The game consistently performs well, even in handheld mode. A few moments of hitching in particularly intense fights were forgivable. Cutscenes are well-directed, but often overly long, and the soundtrack is really a highlight.

There are things I really like about Daemon X Machina. Building my Arsenal was fun, but eventually that basically came to a stop. The setting and cast is creative and enjoyable enough, but the story delivery strays into anime tropes and babbling between the cast. I respect the work that went into making controls that work for controlling a complex Arsenal on the ground and in the air, but they’re either too complex or could do with better introduction. The biggest problem is the game just doesn’t offer enough variety. I’d have gladly traded 10 missions for 3 more Colossal Immortal fights. About a third of the way in things started to click, but for the last few hours I was more than ready to see the plot conclude. Fans of Armored Core should look past my concerns, and give the game a go. People who want to take the controls of a mech and shred a bunch of underpowered foes will have a good time. The general public should probably give it some extra thought.

Bouncing between this review and Vice Game's Austin Walker's review has me amused comparing and contrasting the two moods.

Seeing as how I've put in a 5+ hours in to the 2 hour prologue demo just to build up more money for the full game, I know where I am with this game.

Like I said, for some people none of my concerns will matter.

Ok, I thnk I can skip this for now. Maybe I will get it eventually if I find it really cheap.

This game was always pretty firmly something I knew I was going to get a decent amount of enjoyment out of from the demo that came out in January or whatever. There wasn't much that was going to stop me. I'm all in..

If it didnt come out at such a packed time I might have got it. But I have Fire Emblem, Astral Chain going at the moment and Zelda and Dragon Quest coming very soon.