Fight corrupted artifical intelligence for a better future. A future that is, well, very desolate. 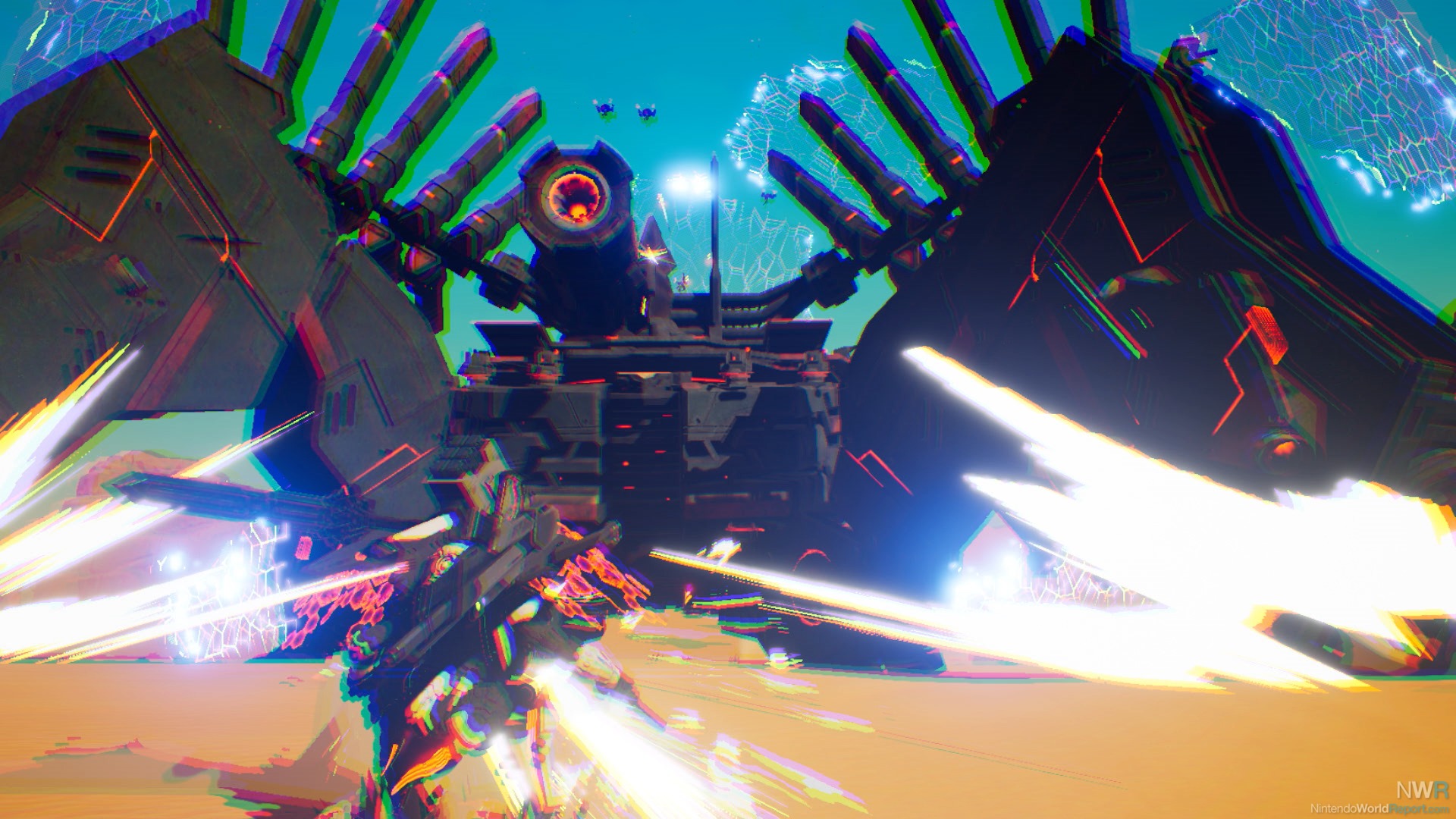 Few things are as incredibly cool as flying around in a mech. You will explore big areas, fight anything that moves and see it all come together in a very organic way. One of the pillars of the mech battle genre is Armored Core, an original PlayStation oddity. It’s a fun romp, though a little bit bland if you ask me. Kenichiro Tsukada, the producer of the game, previously worked on the series and wanted to relive the magic from all those years back. Did it succeed? Well, if I'm being very honest, I don't think so.

From everything I’ve played so far, the story is the thing I'm the least sure about. The story revolves around the tale of an apocalyptic event, known as the Moonfall. A moon, hovering above the planet, broke off and crashed into the surface. The red light turned most artificial intelligence driven entities against humans. At the same time, a subset of people were touched by the energy as well, gaining special powers in the process. The story in Daemon X Machina sees you fighting against Immortals, and experience the complications of war. The player steps in the shoes of a new Outer mech pilot, tasked with help guiding mercenaries into battle. Along the way, some weird twists and turns are thrown into the mix including: ''can we trust the AI that is giving us missions?'' or ''is this mercenary group actually willing to help?'.' Add to that factions on the desolate earth itself, and the whole politics behind it is a bit lost on me.

What doesn't help matters is the way Daemon X Machina tells its story. For starters, there are small yet stiff cutscenes in which the characters interact with each other. They all stand in a distance from each other, and don't really have any particular interactions. Furthermore, the cutscenes will only last less than a minute. For the remainder, you will have to do with spoken text boxes that fill up the entirety of the screen. The voices aren't half bad, even funny at moments, but the context given feels so flimsy and minimal. The dialogue doesn't make me pumped for the next mission, but rather makes want to get on with it.

The structure of Daemon X Machina is just ok. It reminds me a lot of the old Monster Hunter games, but at its most hooky. You choose a mission from a list, get an information dump and start going through the motions. Each mission offers side objectives to complete, but as long as you do the basics, the game won't overly complain. Daemon X Machina will get grumpy for using too many resources, but this rarely is a problem throughout my experience. There is base you can stroll around a little, but that really doesn't result in much. You will mostly hit up item and upgrade shops to prep for the next mission on the list. 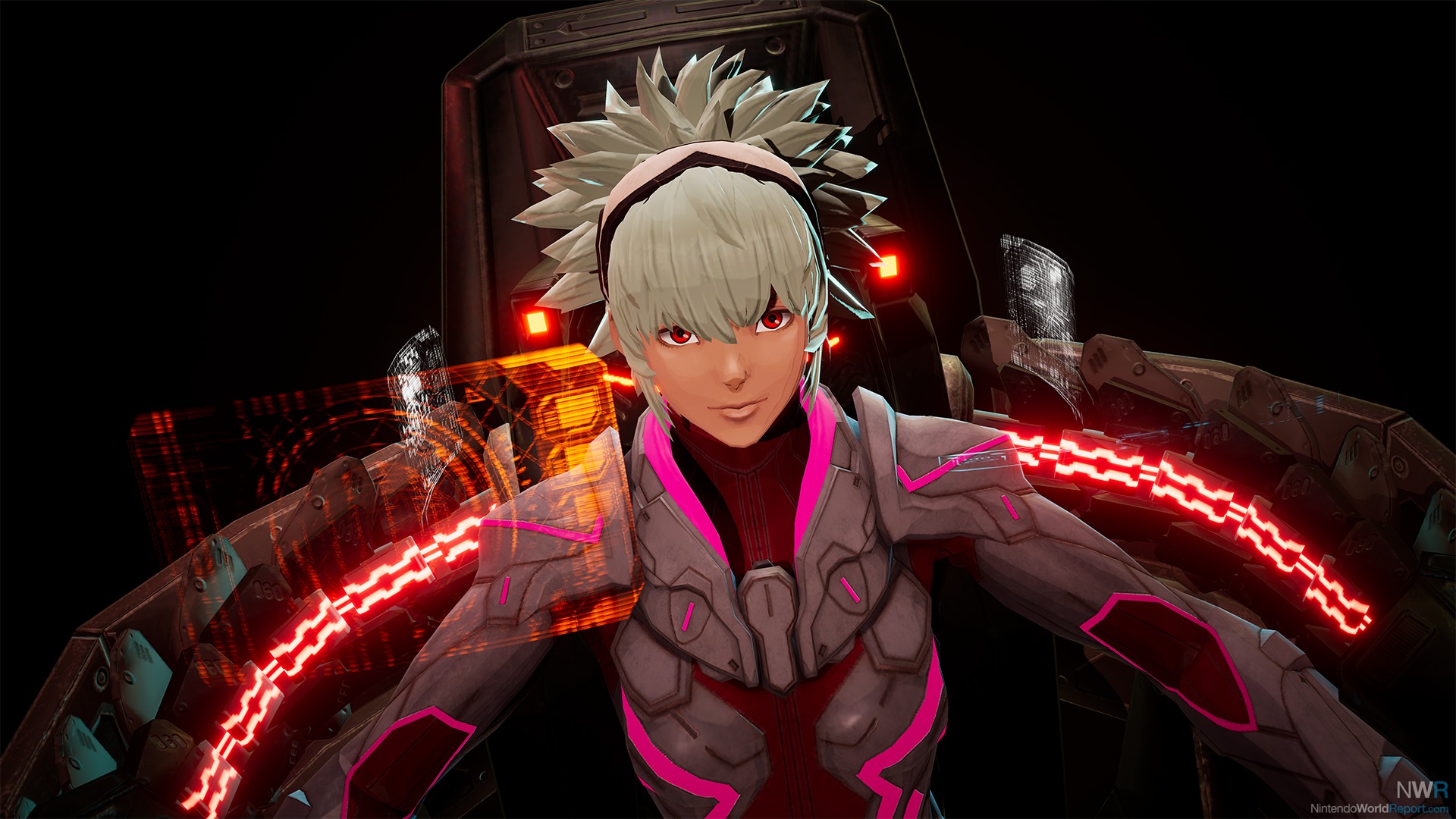 The missions are two fold. After completing the D-Rank, I got equal parts frustrated and entertained by the proceedings, like when it took 35 minutes and multiple tries to take down a single boss. The patterns are interesting and require some unique maneuvers, but Daemon X Machina explains very little. You are mostly up to your own devices, which is incredibly frustrating, simply because you don't know if you're doing it right or wrong. On the other hand, the sheer amount of surprising mission objectives are a delight. From fighting other mercs to defending a specific point, there is some fun to be had.

Controlling your mech is the best part about the game in all honesty. While the options are limited in the early goings, you quickly learn to equip all sides with weaponry. You have three options always at the ready with two more weapons waiting in standby, allowing you to swap between. The sheer amount of weapon options is staggering, and it isn't just limited to some guns. There are cannons, swords and even sniper rifles that can be attached to your almighty machine. It makes destroying other Arsenal mechs so rewarding, as you will be able to scrap them for brand new parts.

The fun of combat doesn't stop there however. The standard features that the Arsenal comes with are exciting as well. On the ground, your mech can glide like there is no tomorrow. This is outstanding for fighting enemies up close and slicing them in half with a blade. Naturally, you can also keep distance that way and fire away at enemy mechs that are trying to hide. When it is time to glide through the air, however, this is when the gloves are off. It is highly entertaining to glide through the air, and position yourself to fight your opponents wisely. In those circumstances, I do wish that there was an actual lock on button, but once you get close enough the game does that automatically. 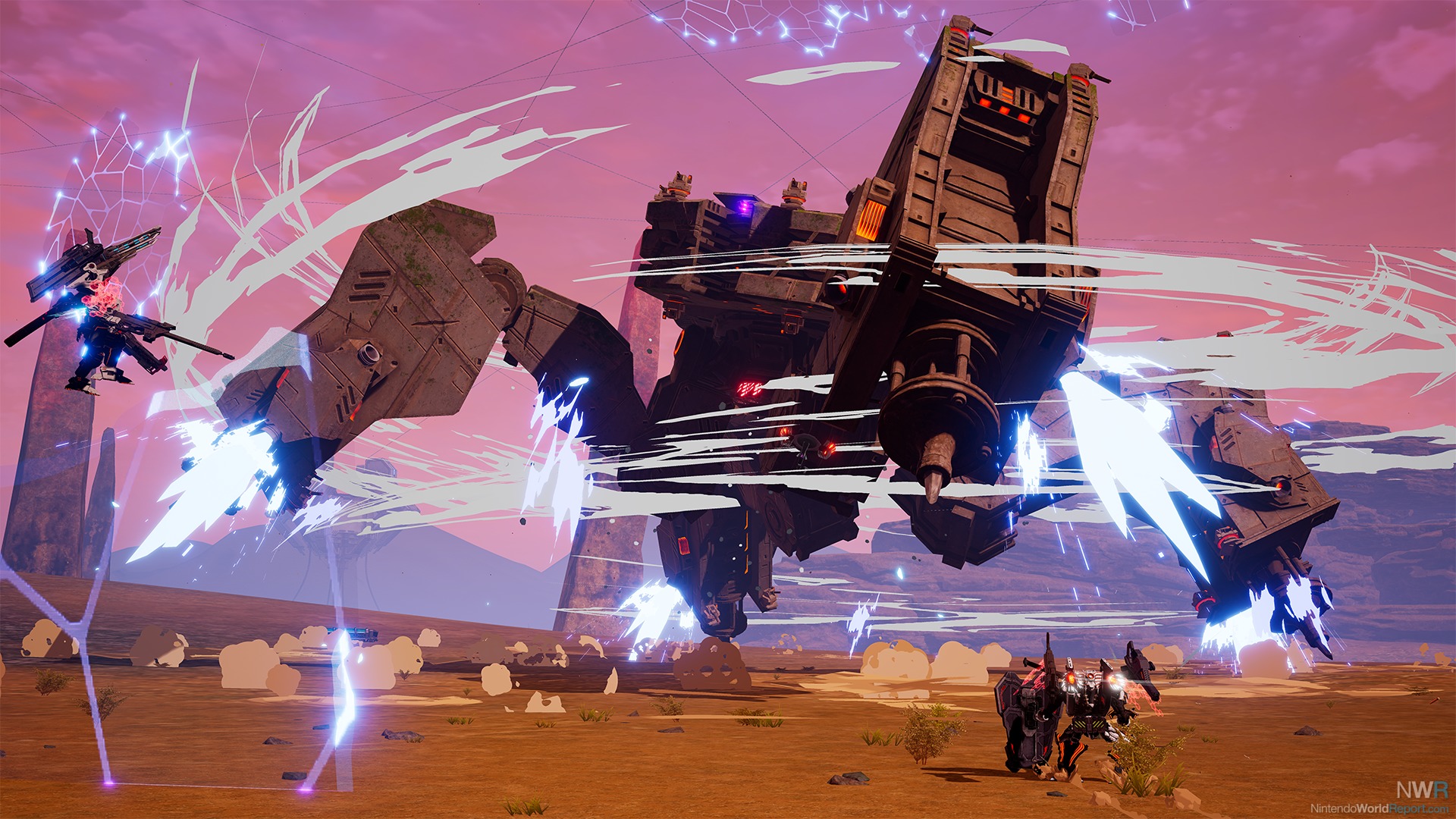 The player can also leave the mech and move closer by foot, but I didn't think there was much usage for this feature. Daemon X Machina is made with Arsenal play in mind, forcing you to use your best attacks. While the player avatar can slide under giant fortresses and go for the weak spots, the whole process is a massive risk that you're taking. You are leaving yourself open for attacks, unless you're in a later stage of the title. An element that I used slightly more in that sense is the Femto energy. By collecting enough, you can enhance certain abilities or even make a Mirage clone of yourself. Using a Mirage makes crowd control possible, allowing you to consider your options at a glance.

Daemon X Machina looks quite good in battle. The mechs move very freely and with tons of flair to boot. The landscapes are quite colorful, though they feel very empty. Outside of some fluff, nothing found in the environments serves a greater purpose. This isn't bad once you are in the midst of battle, but in the slower moments, my eyes wanted just a bit more. The music is fine, more or less. There are rocking tunes in there, but the majority I didn't remember after playing the levels they were in. The only song I actively remember is the one found in the Ice Cream Parlor as it is so different from anything else found in Daemon X Machina.

As I mostly played in single-player, I have to point out how terrible your computer controlled allies are. Long story short, let me take you back to the boss that took 35 minutes to complete. During the mission, I thought that two well skilled mercenaries would no problem getting the job done. Boy, how wrong I was. During the course of the battle, I had to revive each AI ally at least four times. For a little while, I was so fed up with it that I refused to do anything. In the end, I had to take my losses and realize that the health bar would diminish quicker. I could have grinded on smaller enemies and gotten a bunch of ammo packs, but that would have made the battle easily last an hour. 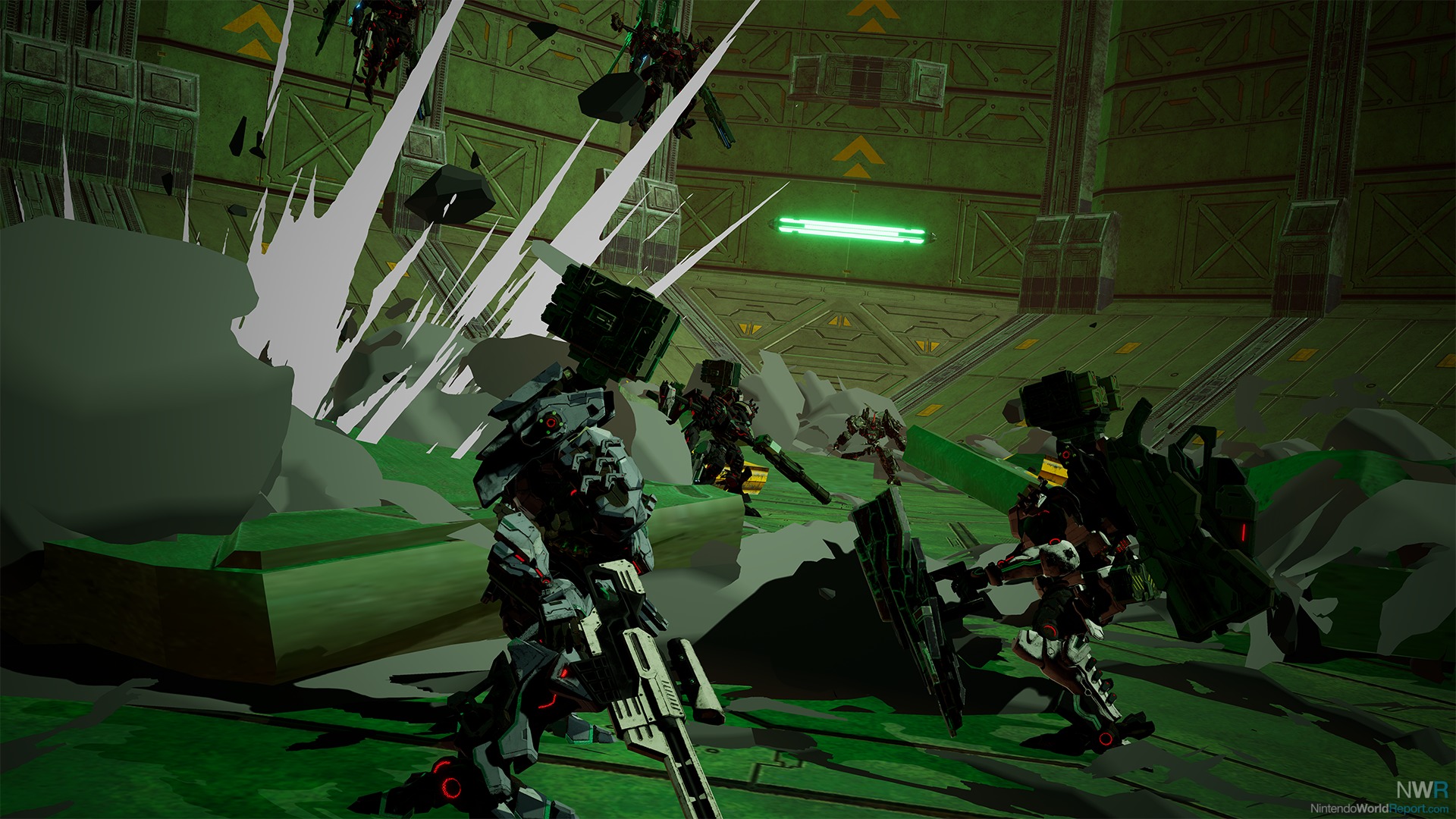 As far as local and online multiplayer are concerned, it seems to work pretty well. The few matches I played had very little lag and performed as they should. Interestingly enough, the missions are completely different from those found in the main campaign. They are made with multiple players in mind and offer quite different objectives than those found in the main game. For example, you will take on the various mercenaries groups in head-to-head competition. Other missions focus on giving each team member a task, and sticking with those as much as you can. They will prove challenging and make for a solid co-op job.

The opening hours of Daemon X Machina left me feeling kind of flat. The action is entertaining and I certainly didn’t dislike the gameplay, but everything else surrounding it is like an empty husk. You think there is a bigger meaning to everything created, but there really isn't. The environments, story and the help given by the AI are just things that I can't simply ignore. The weapon and mission variety are saving Daemon X Machina so far, and it remains to be seen if those elements can hold water.

Oof. This sounds almost all bad. I have this game pre-ordered, but I’m starting to second-guess whether it’s for me or not.