I heard that war has changed, but I always heard war never changes.

Since the original Advance Wars-inspired strategy game Tiny Metal launched on Switch in late 2017, two prominent games have come close to muscling in on its turf. Fire Emblem: Three Houses will be going more medieval, but Chucklefish’s Wargroove is the more obvious comparison in the genre of “Yo, we made a Famicom Wars.” The 2019 sequel Tiny Metal: Full Metal Rumble seeks to stand out in two ways: it is slightly less expensive than Wargroove or even its predecessor, and it eschews storytelling in favor of pure military strategy. The end result is more focused, but there’s still some slight hiccups that keep Tiny Metal from greatness. 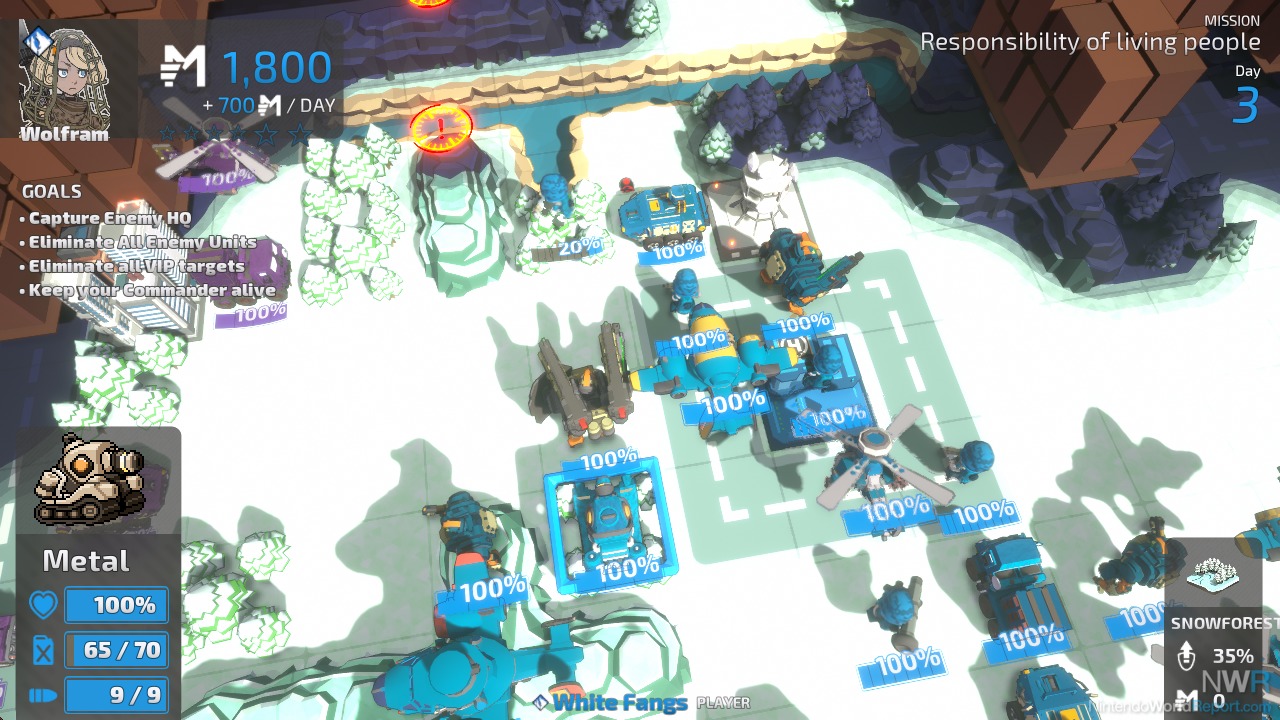 The core gameplay of Full Metal Rumble is similar to the original game that Alex reviewed late in 2017: play is on a grid-based map, and troops with various range move about the map, capturing cities (for building and repair) and factories (for cranking out the troops). A fog of war is present on the higher two difficulties of the three offered by default, but not on Easy which ends up making a troop type largely moot. The combat is focused heavily on the player phase, as most units actually represent a group of up to 10, and more troops in a group means more damage. There’s a triangle of sorts in combat: infantry beat lancers who beat armored units like the titular metals. Each mission has different objectives, but there were a lot of “rout” or “seize” missions in play: if both came up, it was only necessary to complete one of them.

In addition to the story mode, “skirmish” maps with no stakes allow for combat practice, in addition to an online multiplayer mode. Regardless of what mode you’re playing in, though, be ready for a long trek: after the first tutorial map the shortest map I played was 40 minutes long, and going over the hour mark was common even on Easy. There also isn’t any sort of rewind mechanic, as I found out when I used the “lock-on” mechanic to surround a troop in a mission that gave an achievement for never locking on. The portable performance has been improved a bit over the original, but this is caused by a minute+ long initial load. There was also some hitching in switching between units on the fly, which when I had 35 troops in play at once in mission 4 meant it happened a fair bit throughout the game.

The story is largely unmemorable, but thankfully is skippable if you’re repeating a mission for whatever reason. Early on, it may be necessary to take notes as the game will explain three or four new unit types before the start of a mission. If you asked me to explain the difference between a Viper and a Striker, it would take a couple of minutes to remember what they did. (The Viper is specifically anti-air, while the Striker is essentially an archer from a Fire Emblem game with more explosives.) Once I had the troops straight and was able to summon in special units, though, the maps became a bit more forgiving.

Full Metal Rumble largely kept the same art style as the original game, which mostly worked out well. The unit descriptions are tucked into the lower corners, and maybe could stand to be a slightly bit bigger on TV but they worked fine in handheld mode. Perhaps surprisingly, the commanding officers and hero units are voiced, and they do stand out from the generic voice lines the rest of the troops get. I didn’t really notice the background music at all, so this is a good game to get through a backlog of Radio Free Nintendo episodes with.

For a second attempt, Area 35 has done a solid if unspectacular job with Tiny Metal: Full Metal Rumble. They’ve addressed a few complaints about the game, especially in handheld mode for me, which is pretty impressive for a year and a half turnaround between games. If the initial load and maps themselves weren’t so long as to make it a chore to play in bursts, this could be an all timer. It’s not a general, but sometimes you need staff sergeants.