Do you like Advance Wars? Do you lament the fact that there hasn’t been an Advance Wars game for nearly 10 years? Well do I have the game for you. Tiny Metal is to Advance Wars what Golf Story is to the Mario Golf story mode on Game Boy Color: a charming romp that wears its inspiration on its sleeve – even if it never reaches the heights of the source it emulates.

The gameplay of Area 35’s Tiny Metal is, more or less, what we’ve come to expect from the Wars series. You spend each turn on a standard strategy RPG grid, moving various units and then attacking with them. Your field of vision is limited, however, and you can only see as much of the map as your forces allow.

Units range from ground troops to vehicles that fight over the land and air. The former are weak, but allow you to capture buildings like cities – which heal your units – and factories, which manufacture new units to help you on the battlefield. 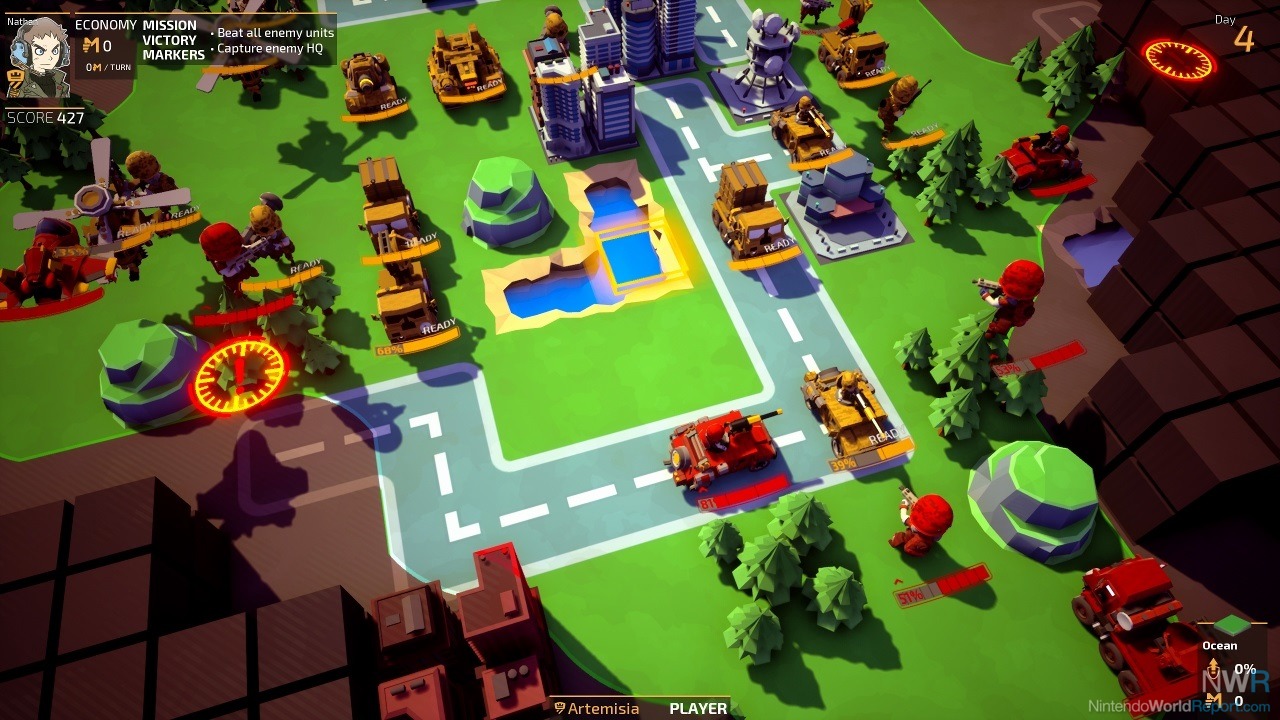 Vehicles like Metals (tanks) and attack helicopters deal greater damage, at the cost of various weaknesses. Metals have limited movement range, while most vehicles can be promptly destroyed by rocket launcher-wielding infantry. Unit diversity is encouraged, so as expected, maps are littered with trees and environmental spaces that affect visibility, movement, and defense.

When you attack an enemy, you go to a battle phase – much like you-know-what. Each unit on the battlefield represents a group of said unit, so when you attack one soldier on the map, it actually represents 10 soldiers during the battle phase. You’re encouraged to attack first, as this not only lowers an enemy’s HP, but it also lowers a unit’s numbers and, by extension, their attack power.

Thankfully, Tiny Metal has a trick or two up its sleeve to create some distance from Wars gameplay. In addition to traditional “attack” and “wait” strategy options, you can also focus on an enemy from attacking distance. Then, later in the turn, you can send another unit to an attacking distance and select “Focus Fire,” which lets multiple units team up on an enemy at once to deal massive damage. In a game about attacking first to weaken an enemy’s power, this mechanic is huge, and a lot of fun to play with.

The title also distances itself from Advance Wars in its Wonderful 101-esque 3D visuals, which gives Tiny Metal a pleasant, slightly flashier look. I wish I could say the same about the handheld mode experience, which features an unfortunate amount of slowdown and substantially downgraded visuals. This is extra sad to report because I think this kind of game is flawlessly suited to Switch handheld play.

Most of the game takes place within Tiny Metal’s 20ish hour campaign, wherein you play as Artemisian Lieutenant Nathan Gries in a war against Zipang, a neighboring island country. You blame them for shooting down a plane holding the Artemisian king, and the plot, conveyed through text boxes, character portraits, and Japanese voice acting, tells a relatively basic (if not slightly convoluted) tale about the complexities of war and those who fight in it. I mostly enjoyed the story, though I’d argue the cutscenes are a bit too long – to the point that it sometimes gets in the way of the gameplay.

The worst thing I can say about Tiny Metal is its slow pacing. Complex campaign missions can often take up to and longer than 45 minutes. If you’ve played Advance Wars, this is nothing new, but the gameplay is perhaps even slower than Wars. This hindered my otherwise-positive experience some, but others may enjoy the pacing more than I did.

Alongside this campaign, the game comes with dozens of story-free skirmish maps, and the main menu promises a multiplayer mode that should add a good bit of playtime to an already-beefy game.

I hate to say “fans of the genre” here, but Area 35 made a straight-up Advance Wars game in Tiny Metal. Because I like Advance Wars, I enjoyed my time. That said, Tiny Metal is not as good as Advance Wars. The former moves a good bit slower than the latter, and I would much prefer a brisk Advance Wars-style story over the slightly-long-winded one present in Tiny Metal.

also, don't forget the fact that this game was funded by... kickstarter money. from a different kickstarter. that was funneled from one project to another.