Emotions soared high as I traversed through, Brothers: A Tale of Two Sons, for the second time in my life. It tells the story of two brothers, on a quest to recover magical healing water for their ill father. Through their travels, they encounter a slew of different mythical creatures, beasts, warriors, beautiful vistas, and often more mature imagery from a traditional scary fairytale. It’s a heavy experience, but a short one, clocking in at about three hours; four if you’re looking for the in-game achievements. It feels like a criminally short adventure, but it also seems about the right length of what the story is going for.

Fittingly, I played through with my own brother, on National Brother’s Day, as well as on my own because the intent of this experience is single player, as described by the on-screen messages at the beginning. That said, I think a co-op experience (while yes, different) worked quite well. In single player, each side of the controller controls a different brother, meaning you are often asked to complete tasks with two brothers moving at the same time. The novelty here, is having to complete basic tasks (moving the characters, pulling levers, climbing, etc.) in the puzzles, but with using both characters simultaneously. The puzzles are designed as “rubbing your belly and patting your head at the same time” challenges, made more difficult with an occasional enemy or time-based obstacle. None of them are hard to figure out, the answer to each challenge is usually very spelled out. The challenge lies in seeing if you can complete them while using both brothers. In co-op, this is made much easier, and that novelty is lost. I still had fun with it, but it was not until I returned to playing by myself where I saw a bit more challenge. This game predates, A Way Out, developed by the director, which leans in the opposite direction of requiring a second player, and you can see some of that concept being born in Brothers.

Visually, Brothers: A Tale of Two Sons looks quite nice. It teeter-totters between the scenery looking breathtaking, and the effects’ age showing. It definitely is not on the level of something like God of War, but you’re hard pressed to say it looks bad anywhere, It just looks, older. The rain patterns criss-cross unrealistically, and the shadows in particular are culprits of lighting systems that are from yesteryear. But that didn’t seem like a detriment to my experience overall, more of one I would occasionally notice. The music however, is an artistic gem that has stood the test of time much better. It fits in with the environments, themes, and story very nicely. It’s often very quiet, and more ambiance, which is admittedly, a safer option, but it still seems like the best choice to have made. Because when the story emphasizes an important detail, the music gets cranked up to an eleven, to maximize the emotional weight of a scene. 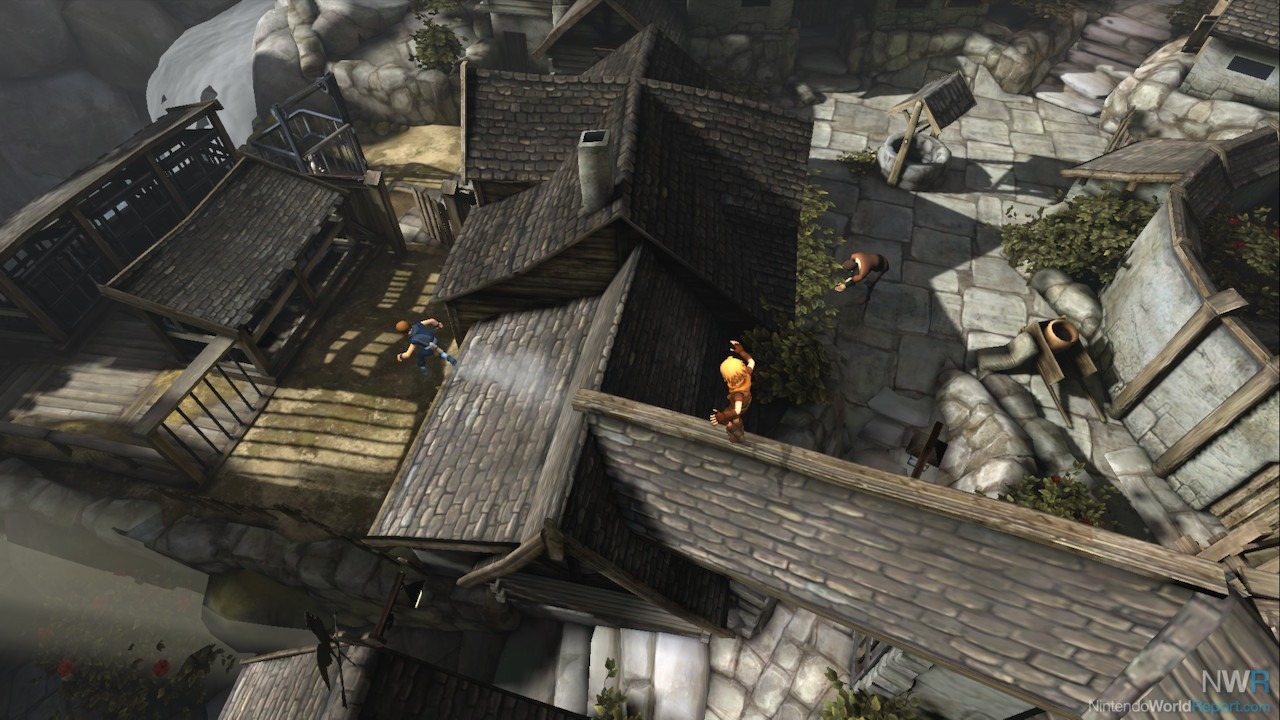 Wrapping up this package of Brothers: A Tale of Two Sons comes with an art gallery, a music selection, and even a commentary video from the creator over the gameplay, unlocked from the very beginning. These treats were great and definitely were something to check out because of the short gameplay time. Brothers: A Tale of Two Sons runs fine in both handheld and in docked mode, however more than a few times I experienced a glitch. Sometimes one of the brothers wouldn’t quite grab a ledge properly, and end up plummeting to his doom. Also, it’s not always made clear what you can and can’t interact with, which is fine because it encourages exploration. You can even count on each brother interacting with said object differently each time, which doubles the amount of content to be seen. But sometimes you can easily miss something that is worth checking out, and you will have to replay a level to reach it again. These levels are really short, given the total time length of the adventure, so it makes sense to revisit areas. But also, I’m less inclined to do so given the linear structure. I already played these puzzles, I kind of want to fast-forward to the areas I missed. It’s a small nitpick in what is otherwise, a great experience.

Brothers: A Tale of Two Sons, while short, has a lot to offer thematically. It doesn’t show anything mind-blowingly new, but rather comes across like a beautiful amalgamation of the greatest hits from dark fairytale. It only scratches the surface of its own potential, but the beautiful scenery, music, themes, and interesting take on gameplay make it a definite title to check out.