It's adorable, and addictive, until you realize how hard it is. 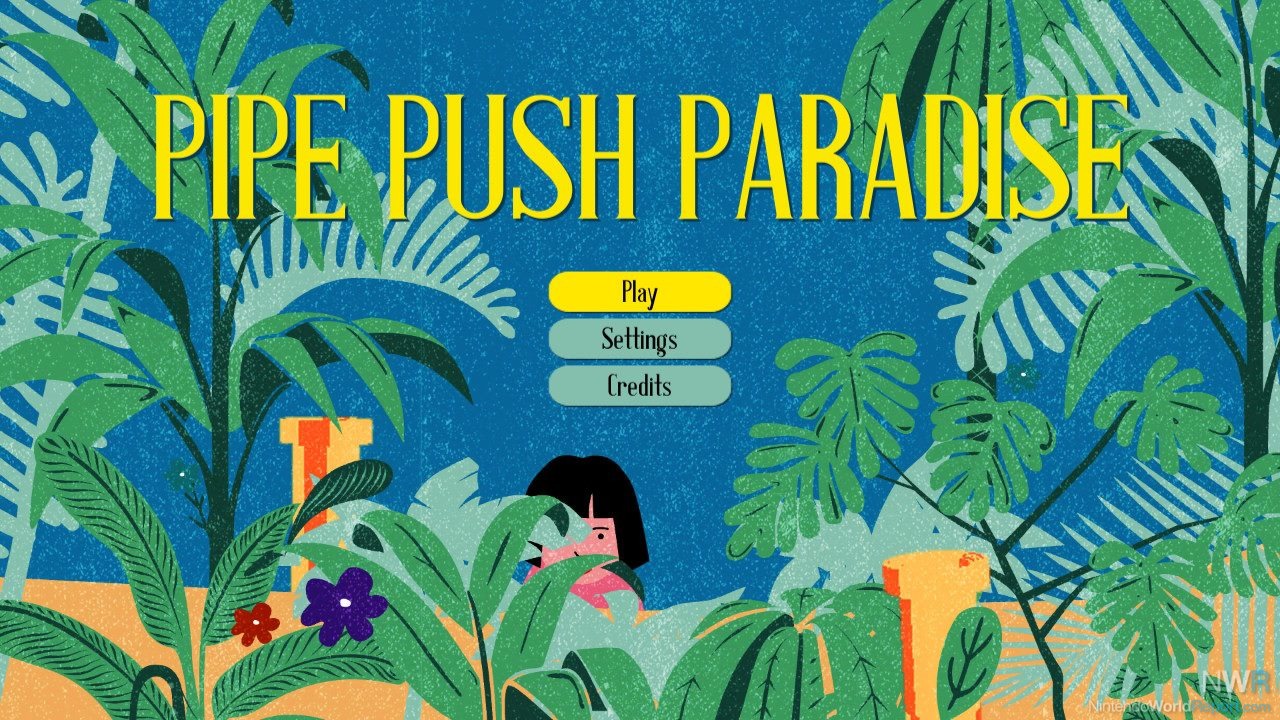 Pipe Push Paradise pleasantly provides plentiful puzzles politely. Okay, I had to. In all seriousness though, I was surprised by how much I enjoyed this wonderful game. Puzzle joy comes in the form of over 40 puzzles to solve, with a fourth of them solvable in about an hour in total. After that, it’s time to bust out the thinking cap, because they can get quite hard to solve. That is to say, even though a lot of the puzzles can quickly be finished, a good amount had me staring at them and getting frustrated. As is the case with many puzzle games, your mileage may vary in playtime. I finished all the easy puzzles without breaking a sweat, but from medium and onwards, the road became long. 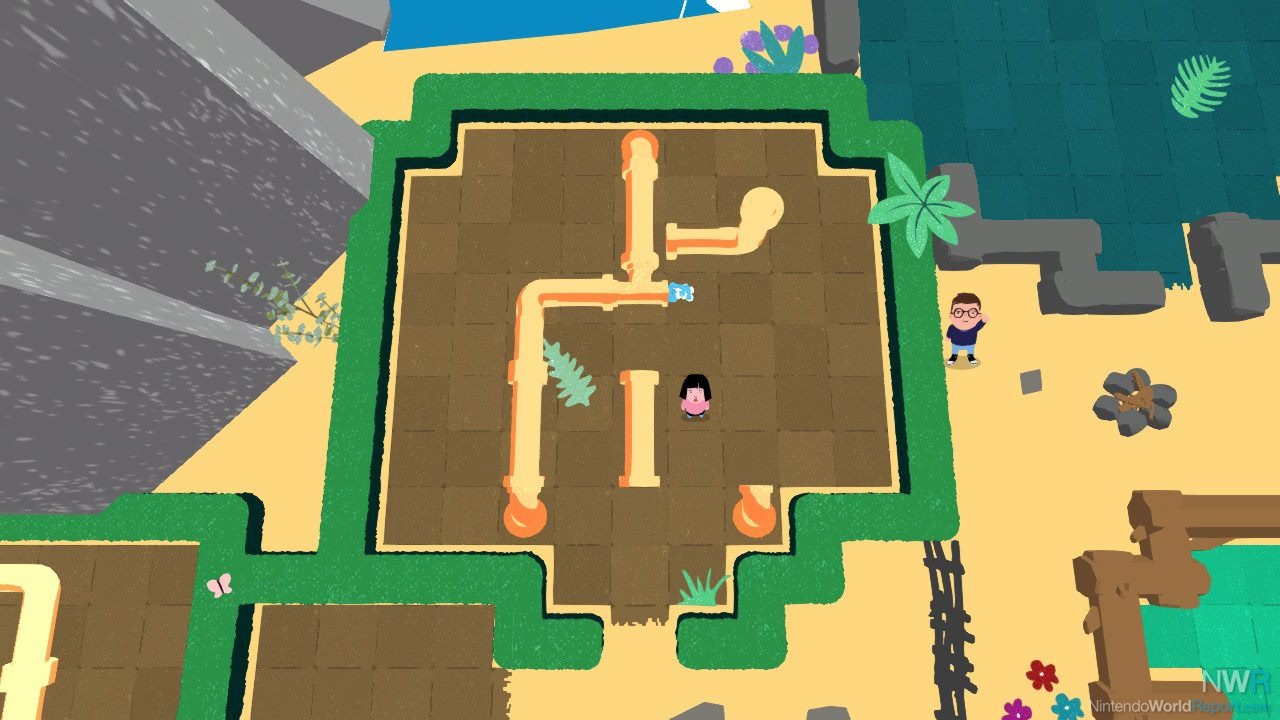 The premise here is that you need to move and connect pipes to restore waterflow. You move them by running into them, and depending on where you run into them, you can rotate them horizontally and vertically. For example, running into a pipe by either end of it, will move it across the ground, like your basic sliding block puzzle. But pushing a pipe on its side could rotate it upwards, creating a third axis for you to keep track of. This is very much taken advantage of with puzzles that ask you to create arches, or to go around obscuring obstacles. You explore the island freely, with about 6 different sectors to it. Each sector has a theme to its host of puzzles. You don’t have to finish all of the puzzles in a sector to advance onwards though. You simply have to beat the few easy ones that showcase that sector’s theme, and then, you’re moving on. It’s up to you if you want to stick around and hit your head again with the more challenging ones. Again, because of this I was able to get to the last sector within an hour of playing. But the content here, lays within how elaborate the harder puzzles get. There are many times where I found out how to solve a puzzle via a happy accident. That was both exciting for me because I saw a new element of how to use the pipes, but I also was left with a desire for a small hint system of some sort that would push me in the right direction. 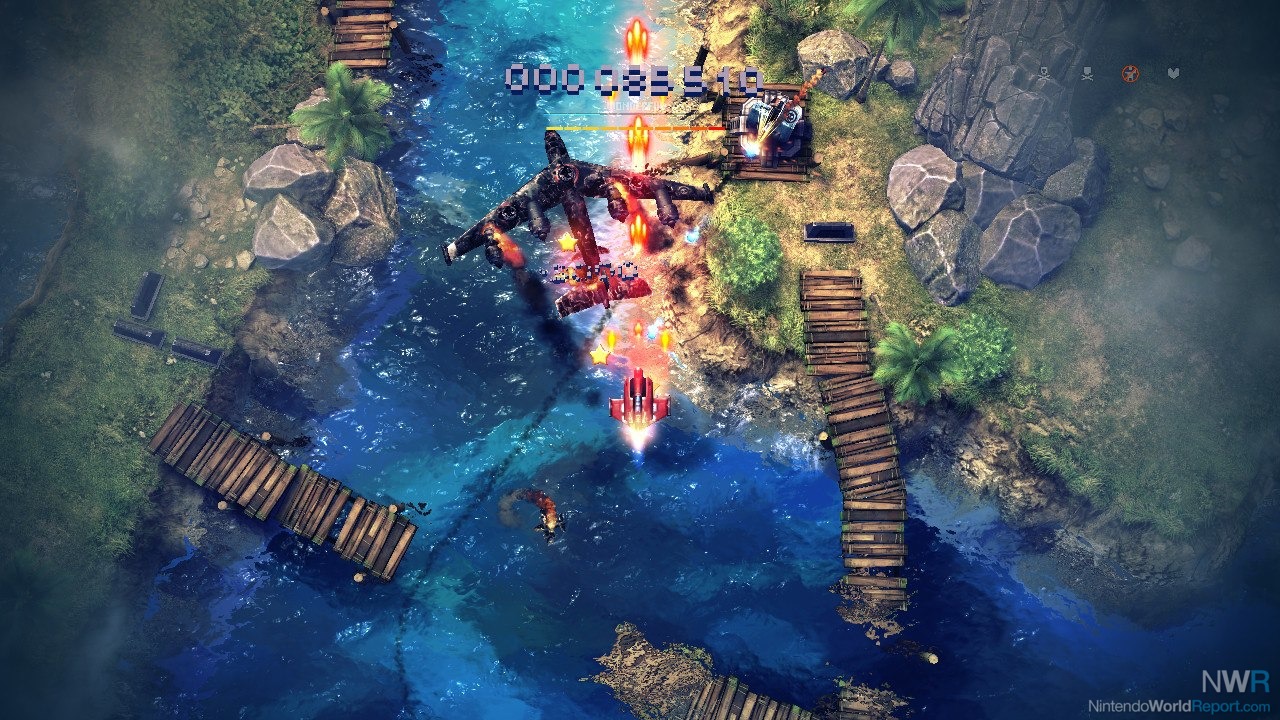 The story feels more like a joke then something to be taken seriously. You take control of a little island girl, whose uncle has fallen asleep. He is the island’s sole plumber, and you have to restore the pipes flow of water throughout the island to bring back peace. A handful of NPCs will give a one-liner to you as you walk by, but by and by, that’s about as much context as you will get for this puzzle escapade. And that is totally fine, because if there is one thing that Pipe Push Paradise does, it’s streamlining. You can walk out of just about any conversation whenever you want to if you don’t want to be bothered by the text. You can leave any puzzle when you want, and return to them in the state you left them. Resetting puzzles is just a single button press, as well as undoing any actions in the puzzles themselves. Didn’t mean to push that pipe into the wall? Bam, undo. It’s really easy to navigate, and is very accessible because of how minimalistic the controls are. In retrospect, the experience here would benefit from a D-Pad, because the movement is tile-based, so needless bumping into something with the control-stick could be alleviated. Thankfully, you are able to use the face buttons as well, but the Pro Controller is the way to go when on the big screen. 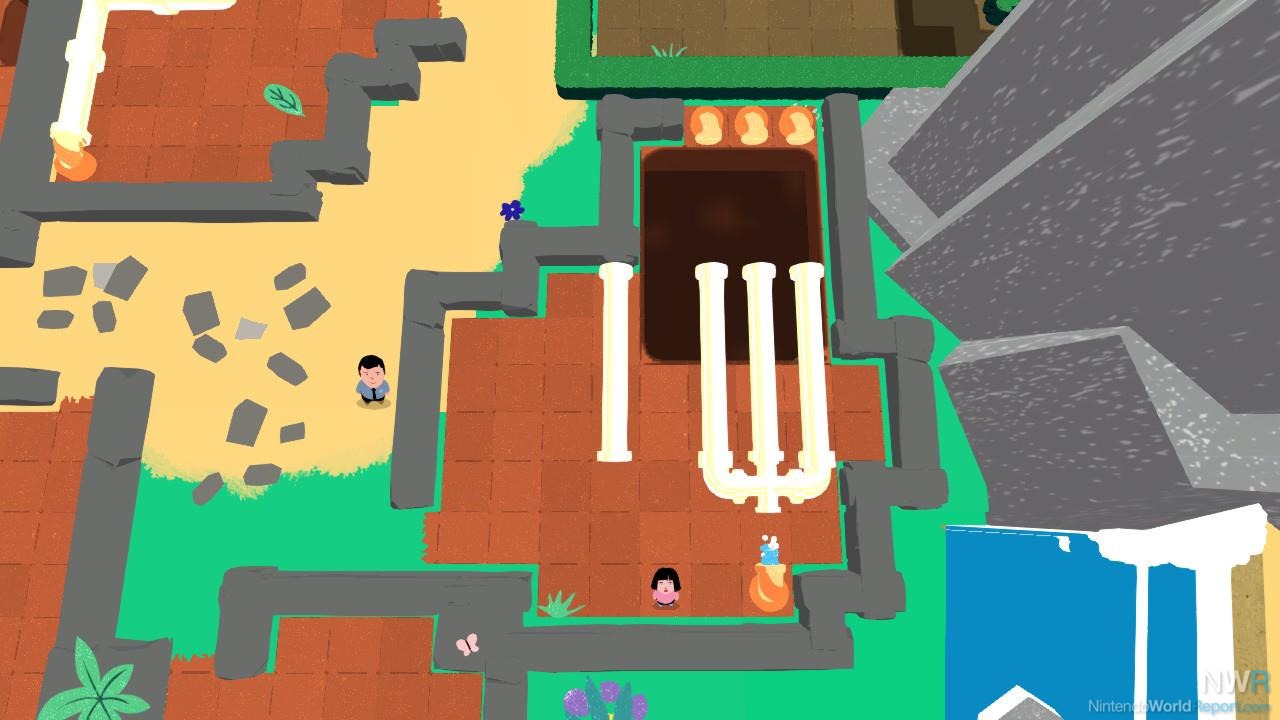 Graphically, this isn’t a powerhouse game, and it doesn’t need to be. It has an adorable cell-shaded art style, with solid colors. You’ll find more detail on the menu, which ties up the art style to look like hand-made island art. It’s quite nice, and fits well, since it doesn’t distract from the focus of solving puzzles. It also works because it can accent areas of interest in the puzzles. A cliff that could be used to your advantage may be noticeable because of its own bright color in comparison to the rest of the puzzle. Not much music here though, which is a blessing and a curse. It’s nice to have just tropical sounds and someone playing a guitar on loop because it’s relaxing, but sometimes it sounds like the hammering down on guitar strings. And that’s Pipe Push Paradise. It has a lot of challenge in it, and is extremely simple to jump into. If you’re looking to fill an itch for a simple puzzle game, check this one out.