I remain confused as to why the Pang series doesn't inspire more imitators. You may know it as Buster Bros. over here, but this is a game where you fire a weapon upwards to shoot and split large bubbles into smaller bubbles. 13AM’s Pirate Pop Plus is a memorable follow-up that features some unique hooks, and I’m happy to report that The Bug Butcher, by Awfully Nice Studios, scratches that same itch. You take on the role of a cranky but lovable exterminator in the future who’s been called to eradicate a nasty infestation in a science facility. Notably, these space bugs tend to be rotund, travel mainly by bouncing, and can often be split into smaller bugs.

The game’s main Arcade Mode is a stage-based progression in which the exterminator is chaperoned through the facility by one or more scientists. Their job is to provide you with perks during encounters with your prey. You will also have to occasionally protect them from long-tongued invaders who crawl across the ceiling. As in Pang, the exterminator can only fire upwards as all manner of bulbous aliens bounce around the room. There is some weapon-based fun to be had, here: keep your combo meter high so that you can activate short-term special abilities, like invincibility or briefly freezing every enemy in place. As you progress through the story, the scientists will toss you new armaments (with limited ammo), including a rocket launcher and a laser gun. 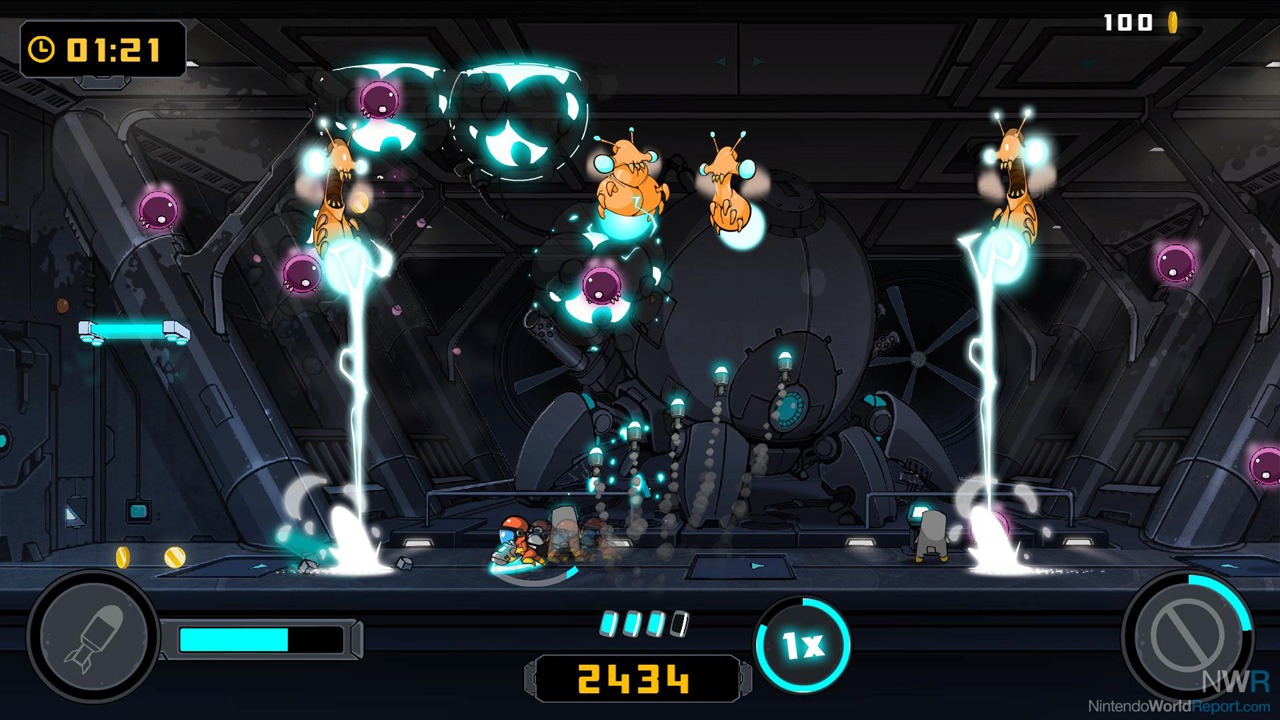 And while plenty of bugs simply bounce around, there’s enough variety that you’ll never get bored. Some bugs fire projectiles at the height of their bounce or spew hot magma towards the ground. Others blort out small bouncy things as they, themselves, hop around. One critter skitters around on the ground until it’s close to you, at which point it launches itself towards you, maw agape. And like I said before, those ceiling-crawling spider pests have a taste for helpless scientists. The environment may also play a role: some rooms are very cramped while others are quite large but feature walls that can section enemies off or horizontal platforms that block your shots until destroyed. You can earn up to four commendations per stage—the key is keeping your combo meter high and grabbing every dropped coin. It’s worth going back and retrying stages to get better scores, because the more coins you get, the more you can upgrade your speed/health/weapons between stages.

The Bug Butcher also offers single player and co-op endless modes called “Panic” (which is a nice homage) in which you can buy upgrades on the fly while busting bugs to kingdom come. I should mention that the game features persistent leaderboards that are displayed between every stage, which is nice for people who care about leaderboards (I don’t).

I want to give ample credit to the game’s art style: many bugs animate beautifully, and even the exterminator—despite his limited moveset—gets some animated flare now and then. The music is also surprisingly catchy. The Bug Butcher is a fun Pang-style romp that works in bursts or in longer play sessions—I found it a good game to play while catching up on TV shows. If you like this arcade game style, The Bug Butcher should definitely be on your radar.