Yar, here be a swashbucklin' good time, me hearties.

Pirate Pop Plus is a fun little title from 13AM Games, who brought you Runbow not that long ago. This retro game emulates your old green-screened Game Boy in an interesting twist on Cannon Ball/Pang/Buster Bros. It’s already been released on Wii U and 3DS—where it was one of the few cross-buy games available on those platforms—and has now dropped anchor on your Nintendo Switch. Neal reviewed the original release, and I’m more or less providing a second opinion, as there is no difference between the three platforms.

The setup is simple: the nefarious scalawag Bubble Pirate has kidnapped pirate Pete Jr.’s shipmates and intends to send Pete Jr. to Davy Jones’ locker by dropping bubbles on him. Pete, however, is nobody’s swabby, and grabs his trusty harpoon gun (I assume that’s what it is), determined to pop his way to victory.

As in past bubble-popping arcade classics, Pete can only fire his harpoon upwards, and hitting a bubble will cause it to split into smaller bubbles. Your goal is to pop as many bubbles as you can while avoiding running into them as they bounce hither and yon. An important secondary goal is to collect precious coins that drop from time to time. Popping bubbles also cause various other things to appear: fruit, letters that eventually spell BONUS, a weapon multiplier, and a few unique weapons with limited ammo like a chain link that stays in place until hit or a machine gun. These flourishes add some variety to what might otherwise be a fairly rote experience. Another change-up is the Bubble Pirate occasionally changes the play field’s gravity, so your concept of “up” is constantly changing. 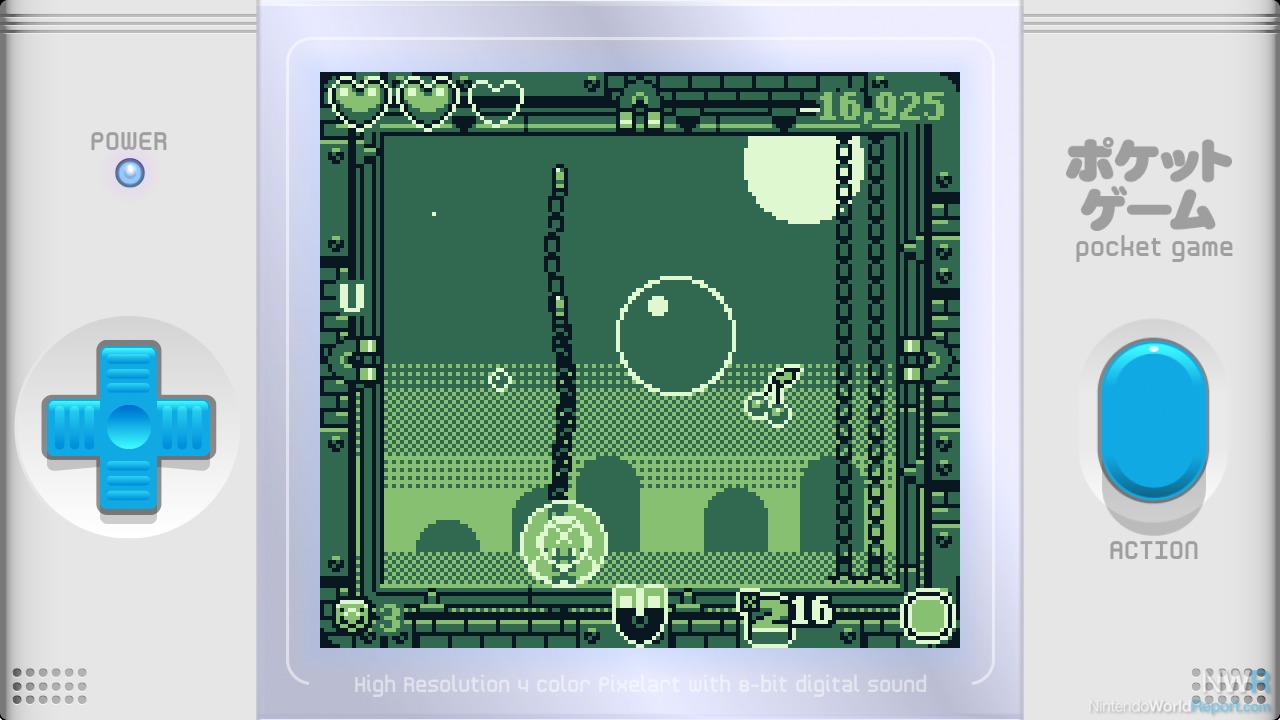 Pirate Pop Plus has two modes: Normal and Hyper. In Normal mode, you have more hearts (HP) and the game is a bit slower-paced. You can usually play a pretty long round in Normal mode and it’s a good mode to play if you want to set a high score. If it’s coins you’re after, though, you’ll definitely want to check out Hyper mode. Here, you only get two hits and things are moving constantly. It actually costs 25 coins to play Hyper mode, but you earn coins at a much higher rate. Keeping your combo meter going will make treasure chests rain from the sky. However, there’s much less room for error.

You’ll want to collect coins because Pirate Pop Plus has a large in-game store where you can modify the “classic handheld” overlay (button colors, faceplate colors, screen tints, stickers, etc.). The best prizes are new characters to play as and new music tracks. However, there just aren’t that many characters or music tracks, so once you buy those things, you’re left tinkering with the overlay’s aesthetic or going after in-game achievements once you, uh, buy the achievement list. Pirate Pop Plus also has a leaderboard but it’s not online, so unless you’re strongly motivated to beat your own score, it’s not super useful.

However, the game is addictive in its own charming way and it’s something I’ve popped on once and awhile ever since it originally came out on 3DS. If you have any nostalgia for Cannon Ball/Pang/Buster Bros., Pirate Pop Plus is a welcome addition to your crew.