‘80s gamebooks continue to be alive and well on the Switch.

When Nintendo releases 20 or so games a week, you tend to see a little bit of everything, but lately it seems like a lot of board games have been seeing life on the Switch. Some have kept the experience fairly close to the original source, while others like Warlock of Firetop Mountain, are a single-player interpretation of a multiplayer board game. The single-player experience isn’t a foreign concept in this case; Warlock began as an adventure gamebook in the ‘80s. The problem is that without the randomness of human decisions and the social aspect of playing a board game with friends, the replayability and ultimately the experience is reduced.

The main character of the story isn’t one the heroes you’ll choose from, or even the sorceress that eerily presides over each campaign, it is in fact the mountain itself. Firetop Mountain is the one constant, it never changes but constantly hides things at every turn. No single playthrough will uncover all of the secrets or reveal all of the storylines that reside within it. The inside of mountain is a collection of twists and turns and a whole bunch of forks in the road. If you’re familiar with the board game, the layout of the mountain will feel familiar, though on a much larger scale. The only downside of a hand-designed dungeon is that it doesn’t take very many playthroughs to feel stale. The enemies and puzzles of each room remain the same, so once you’ve discovered the traps in a room, it becomes easy, and a bit boring to simply avoid the pitfalls in subsequent runs.

The developers should be given credit in regards to attempting to keep each playthrough fresh by assigning a different story to each playable character. At the beginning, the player will have a choice between four different characters, each with slightly different vitals, but each with their own motivation of entering Firetop Mountain. These objectives don’t necessarily require you to run the gauntlet of the entire dungeon. Once you’ve achieved the goal of your chosen hero, you’ll have the option to continue towards the final battle with the Warlock, Zagor, or simply leave the mountain and start fresh with another character. 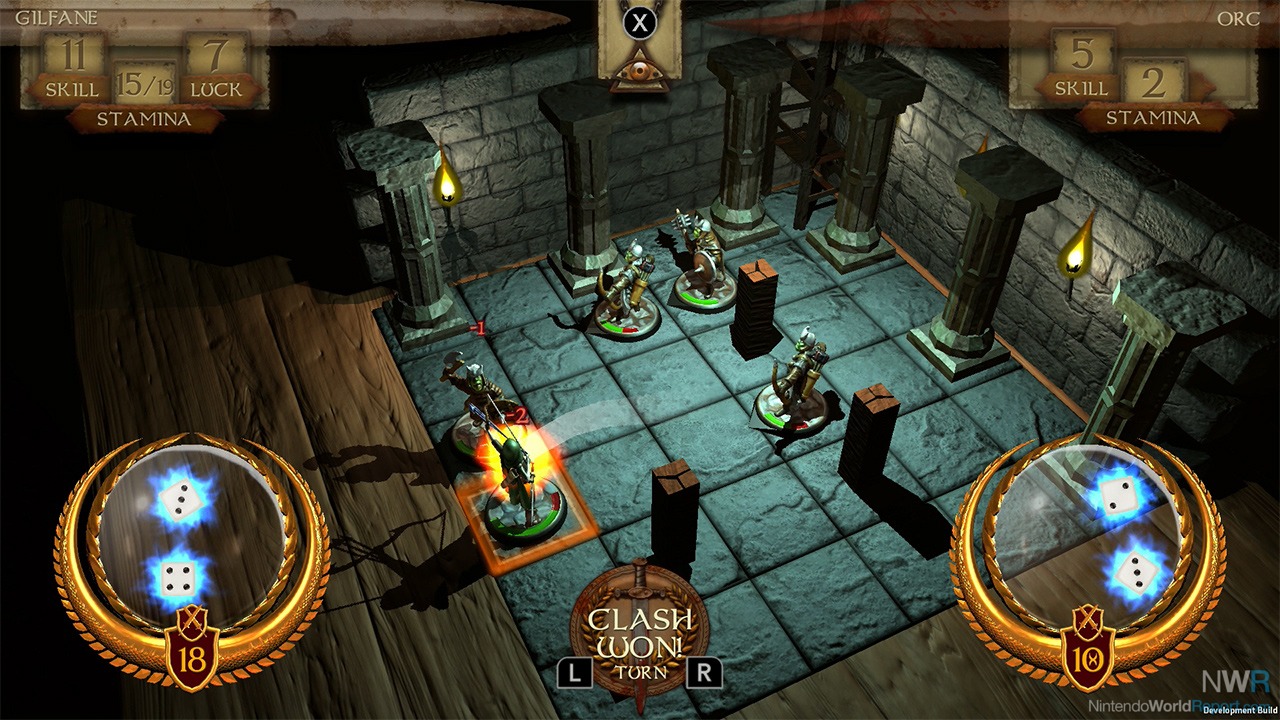 Apart from each hero having an individual objective, they each have their own unique vital statistics and abilities as well. Each character has an initial set amount of Stamina, Skill, and Luck. Stamina is essentially just your health; reach zero and the game is over unless you use one of three available continues. Skill points are used on unique attacks in battle, and luck is the added value to the dice during combat. Unique abilities vary between characters, such as the keen eye that provides clues to puzzles or dexterous when a little speed is needed to avoid traps and pitfalls.

The battle system varies from its board game predecessor to add bit of strategy to the combat. The dual-dice battle with luck added as a modifier still exists, but what's new is an arena grid that allows movement of characters and the use of specialized attacks. At the beginning of a turn you have the option of either moving to a new position, attacking, or using a unique attack, such as an arrow that can hit an enemy from an extended distance. When choosing to attack, you will select an adjacent square in the hopes that the enemy will be there during the turn phase. So for example, you have an enemy next to you, and it's believed they will move to a different position, if you select that square to attack, and the enemy does in fact move there, you land a hit.

I’ve never played any previous version of Warlock, so I can’t speak to exactly how faithful it is to the source material, story or otherwise. As a video game with no prior knowledge going in, I found the first couple runs mildly entertaining with diminishing returns on each subsequent playthrough. Once you’ve been in the majority of the rooms, completing the quests with different heroes becomes monotonous and the combat isn’t interesting enough to carry the game further. I would still recommend Warlock of Firetop Mountain if titles inspired by board games or adventure books is your jam, just be warned that after three or four runs (which is likely about five hours) you may not feel as compelled to steal the Warlock’s treasure consecutive times.