I'd love to watch this movie.

It seems that nobody hated my new review format for Mega Man X Legacy Collection 2, so I’m gonna try it again for this game.

I sure have, voice in my head that I should probably be concerned about! Want to hear about one of them?

Sure, I’m always on the lookout for new games to play.

So I’ve been “playing” through State of Mind, from Daedalic Entertainment.

Why is “playing” in quotation marks?

We’ll get to that. There are broader questions we should get out of the way first.

Did you see The Thirteenth Floor and/or The Matrix?

Yeah, both are cool! Thirteenth Floor has that guy who’s in the Allstate commercials.

But at no point does he ask if the protagonist is in good hands!

I liked it okay, but the ending didn’t make any sense.

Well, I agree with you there. But anyway, you might like State of Mind, which is playing in the same sandbox as those movies.

How does it play?

This is one of those games that you don’t play so much as watch and listen to.

Surely you’ve played games where your only real role as a player is to move from one cutscene to the next. Adventure games do this all the time.

Yeah, but in adventure games you also do puzzles, and those puzzles are often frustratingly obtuse. 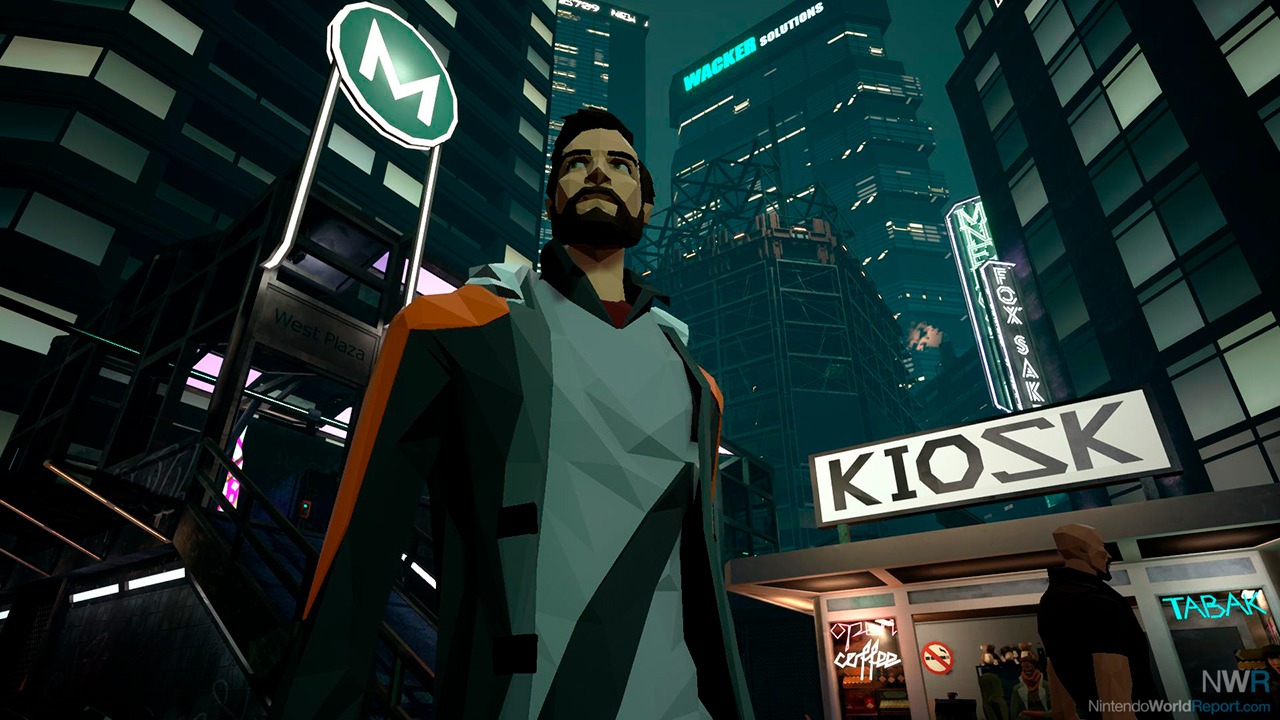 As the player, you do three things in State of Mind: walk around from one objective to the next; engage in dialogues with other characters; and solve very simple puzzles or mini-games. Walking around is fairly standard, though the camera is centered a little too low on your characters. You interact with objects using the A button, which may as well be “press A to do the next thing you’re supposed to do.” Sometimes that means talking to other characters, where you’ll often be given a list of different responses.

Oh, so that’s where the meat is, right? Your different responses affect the plot? It kind of sounds like you’re describing a David Cage game or that PS4 game, Until Dawn.

Let’s say you ask about your son. Then you get:

And then once you ask about your wife…

This influences your character’s tone and word choice but ultimately lands you in the same place.

No. And here’s an even weirder one:

You only have two choices here. The 900 is the amount of money the object is.

So you’re at least managing a resource.

Then why say how much the object costs at all?

Your guess is as good as mine. And let’s say you think that $900 is way too much for whatever it is, so you leave. Problem is, there’s no other way to move the story forward. You have to buy that object to progress. There’s no way around it.

That’s not a choice.

Correct. State of Mind tries to fool you into thinking you’re the one making the calls, but that’s not really true at all. The whole game is like this.*

Okay, well, you said there were puzzles and mini-games.

Yes, and those actually are kind of fun because they tend to be pretty diverse. In one, you try and reconstruct a large image by picking the right smaller images. In another, you control a drone to remotely find people. My favorite is one where you put together a newspaper column (you’re a writer) from several pre-made paragraphs. While doing that, you can press Y to take a shot of whiskey, and that gives you different choices.

Are there a lot of these?

Not as many as you’d hope.

The story is fine, but if you’re familiar with transhumanism fiction, you’ll recognize most of the landmarks. You initially play as embittered alcoholic journalist Richard Nolan who lives in Berlin in 2048. At the game’s outset, he gets in a car crash but aside from some hazy memories, is physically fine. He goes home to find his wife and son missing, and a robotic butler in their place. You then take control of a different guy named Adam Newman who also just got in a car crash and aside from some hazy memories, is physically fine. His wife and son are present and his entire world seems tailor-made for him. While Richard goes in search of his family, Adam eventually starts seeing some Thirteenth Floor or Truman Show-type stuff that makes him start to question his sanity.

Well, I already have a guess about what’s going on.

And you’re probably not too far off. The game’s main thrust is about the relationship between Richard and Adam, but there are plenty of other diatribes that explore things like the surveillance state, integrating robots into society (for good and ill), cyberhacking, VR, and AI. I should mention that the timeline jumps around a bit to give you some backstory on Richard’s end of things. While there are a few surprises, the whole thing just goes on a bit too long, especially since you spend so much time in dialogue sequences. Richard starts off as an enormous dick but softens over the course of the story (kind of). It takes an ungodly amount of time for Adam to figure out what’s going on.

How long is the story?

I didn’t really keep track, but several hours, and it’s longer than it should be because the story can’t help but veer off the main path in ways that don’t always pay off. To be fair, the story is interesting but this is well-worn territory in 2018.

I looked at some screenshots while you were rambling. It looks cool.

Yeah, I really like the art direction. The environments in particular are fantastic. The character models are weird looking initially but you get used to it. Whoever did the character design really liked big collars/hoods/boas. Every other character has some giant accessory around their neck.

Yes, and it’s also quite good! I guess the guy who plays Gerald from The Witcher is in this. There’s just way too much voice acting because there’s way too much dialogue. The game is like 80% dialogue.

I tried reading Crime and Punishment by Dostoevsky a few years ago but I had to stop because it’s just so long and there’s so much fluff and it continuously diverges from the central narrative.** That’s kind of how State of Mind is, but with dialogue.

Maybe this game just isn't for you.

Ultimately, no. It’s just too long and player engagement is so minimal. I don’t like games that pretend to be games but are really just movies. State of Mind would make a great mini-series or book, but it’s not a great video game.

Anything else to say?

No, not really. I’m happy to be moving on to Hollow Knight.

*This isn't 100% true--at the very bitter end of the game, you get to make a few choices (literally choose X or Y) that, combined, affect the ending. Too little too late, guys.

**You want to read Crime and Punishment? I have a suggestion: read The Tell-Tale Heart. There. I saved you a hundred hours.

I haven't played them in ages but the Jake Hunter games are sort of like this aren't they? I remember thinking I was getting into a Phoenix Wright-alike but it turned out far into Visual Novel territory. Reframing my expectations around that genre I think Ill actually dig State of Mind.

I liked Oxenfree when I played it but that game is way more gamey than what you're describing.