What the Great British Bake Off would be like if it were made in Hyrule.

In the current era of genre adhering, procedurally generated titles being released at assembly line speed, it was only a matter of time before a developer began to swim against the current. Little Dragons Cafe creates the illusion of of an open sandbox, but really it’s a genre busting, character driven experience carefully scripted with a purpose. A few elements like a rhythm game, asset management, and exploration are intermixed to add some spice, but the meat of the experience is to become emotionally invested in the wonderful cast of misfits that try to keep a cafe running on a daily basis.

Life at the cafe begins on a sad note. A pair of siblings, Rin and Ren, live and work with the their mother at the Little Dragon Cafe. After finishing their chores they head off to bed, unaware that their mother has been feeling ill as of late. The next morning, try as they might, the pair are unable to awaken their mother from her sleep. Just at they begin to descend into despair, a strange wizard arrives to explain that their mother is actually half dragon, and that her ongoing sleep is due to the incompatibility between her human and dragon blood. The premise is a bit far fetched, but no less so than the prescribed cure for the mother’s illness being to grow and care for a actual dragon.

Not quite understanding what’s happening, the brother and sister team attempt to continue the family business while raising the newly hatched dragon. Luckily, some assistance shows up in their hour of need; a trio of characters arrive at the cafe for various reasons but all become happily, or begrudgingly employed. It’s these three characters that truly steal the show. Even though you choose to play as either Rin or Ren, the siblings become something closer to a spectator while Billy, Ipanema, and Luccola are front and center in most of the interactions. 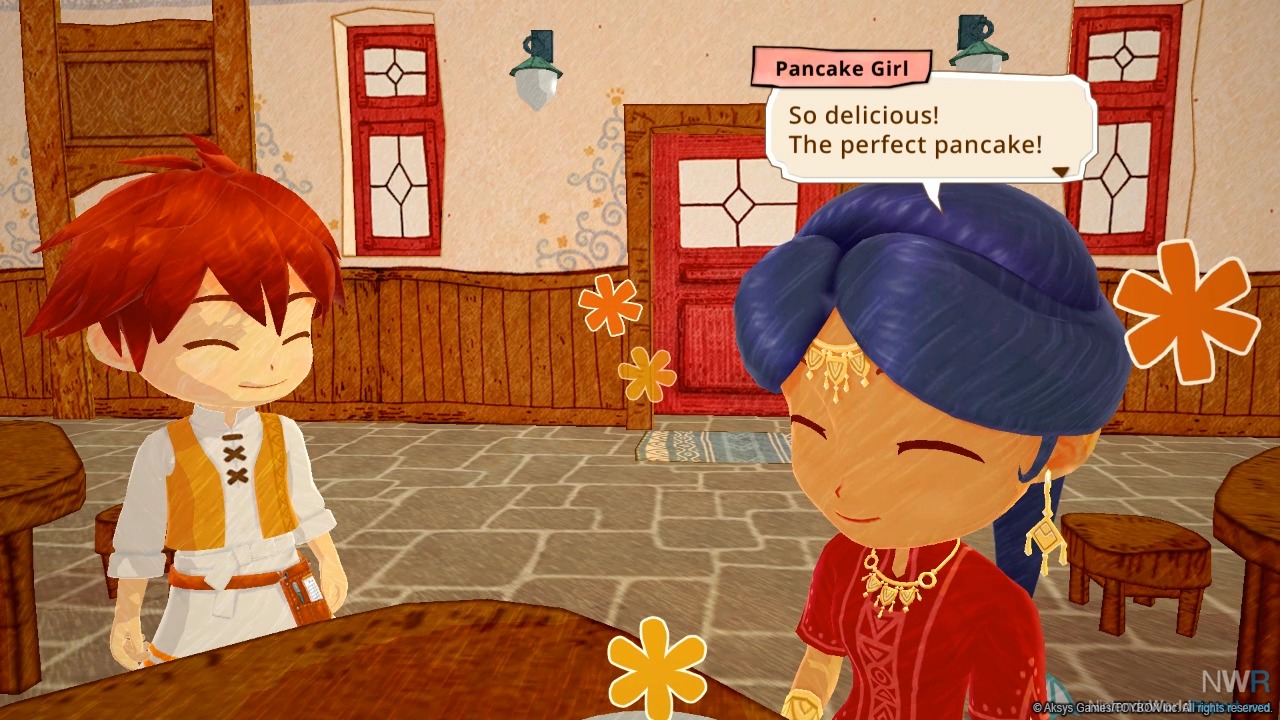 Billy, or beatnik Link as I’ve grown to call him, closely represents a stereotypical millennial. He arrives at the cafe without a purpose, having felt out of place. He left his hometown and found himself waiting tables after trying to skip out on the bill. The hard working Ipanema travels to the cafe in the hopes of learning the skills necessary to open her own establishment one day. Her biggest hurdle is her temper, she casually mentions the damage caused at previous employers after she turns into a white haired lunatic that tosses plates at her source of frustration. The most helpful of the three is Luccola, the not quite yet world famous chef. He’s so enamoured with the cafe that he decides to stay as the head chef in order to fine tune his skills. All three have wonderful personalities that grow as each day passes.

To progress through the game, three elements need to be equally considered, Dragon Growth, cafe reputation, and guest visitations. Taking care of your dragon friend is pretty easy. He’ll follow you wherever you go, whether that's inside taking care customer or outside searching for ingredients. A stamina gauge is the main concern. As stamina begins to drop, you’ll need to provide the dragon with food to revitalize it. Dishes to serve are always in supply, so the only other thing you’ll want to make sure you’re doing regularly is petting them on the head and giving hugs when they’ve been a good dragon. 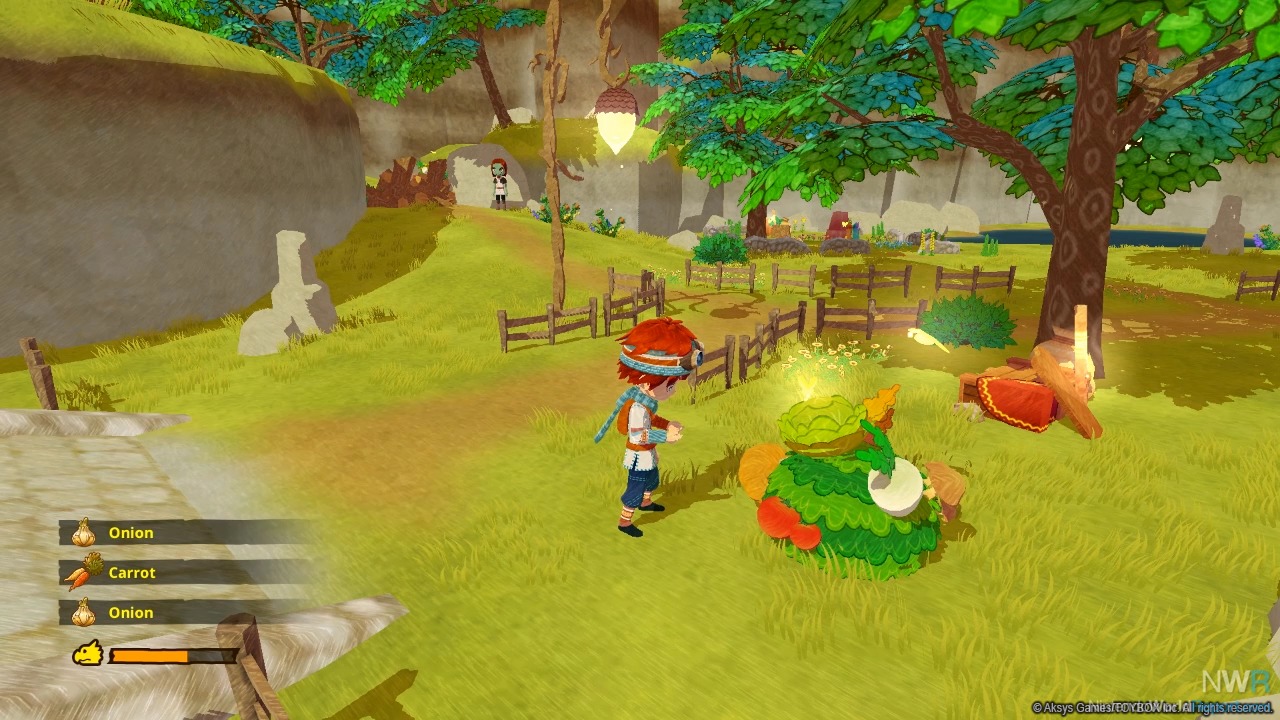 Cafe reputation is based on how well you can manage the cafe. A healthy balance of exploring the island searching for new recipes and ingredients has to be weighed against helping the staff serves customers during the busy periods. Lunch and dinner are the two busiest times of the day so I often found myself searching the island in the mornings and afternoons and quickly returning when the indicator advised me of a slacking staff. Thankfully, you can fast travel back to the cafe from anywhere on the island. You’ll need to do this often as the staff tend to become distracted from their duties quite often. Billy will shirk his duties in order to practice guitar, while Ipanema will become frustrated until she can be talked down to calmness. The quality of the meals on the menu can affect the reputation as well. A star meter indicates the quality of the dish, the recipe and the ingredients used in the meal determine the amount of stars. Recipes and ingredients have fluctuating levels of quality so its paramount to explore the island to make sure you have the best available supplies for the cafe.

Once the ingredients are selected for the meal a rhythm game is played in order to determine how well the meal was prepared. Five levels of quality are determined by the amount of notes you hit just right. Only a few songs represent the many meals available so you often will repeat a previous rhythm, they aren’t particularly long either so mastering the exercise is quick and easy. Finding the ingredients and preparing meals is not enough though, you and the staff will need to take orders, serve the trays, and clean tables in an orderly fashion to ensure customer satisfaction. It’s a process that feels a little tedious early on when few customers enter the cafe but can become total chaos when the enough customers show up to fill the place up. 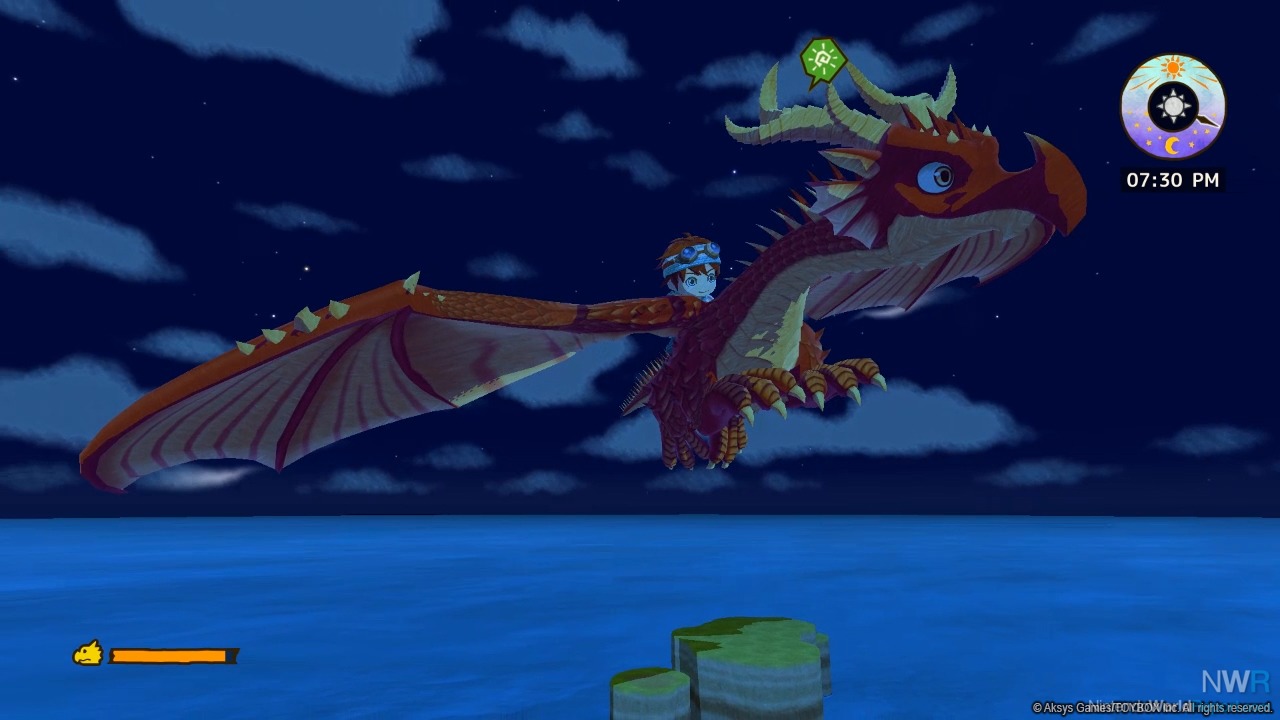 Exploring the island with your dragon buddy is one of the best parts of the day. The island is huge, and new areas become available as your dragon grows and learns new abilities. The landscape is beautiful, with the only downside being some jankiness in the camera while in docked mode. A day one patch does address the issue in handheld mode, but the issue is still prevalent when playing on the TV. A map that fills in after you’ve explored a region would have been nice, but felt less necessary as each day passed as many of the paths set in to memory.

As fun and wonderful it is to manage and maintain the cafe, the true experience is the character driven narrative. A steady stream of guests arrive at the cafe, each with a set of problems that's up to the staff to help them through. Each of the characters have an underlying message to their plot that takes shape over a several day period and comes to a crescendo with a meal from their past that reminds of them of better days. The message is never too complicated, whether it’s appreciating what you’ve got, or learning not to be a bigoted racist (seriously, that’s in there). The enjoyment comes from the interaction between the guests and the staff. The dialogue is well written and all of the stories and genuinely interesting.

With so many elements playing out, it’s really hard to say what Little Dragons Cafe truly is. It’s quite remarkable with all that’s going on that each aspect is enjoyable in its own way. The exploration will satisfy the adventure crowd, the asset management of finding ingredients and developing better meals will please the RPG fans. It will melt time away as you push to complete just one more day, but values your time because there really aren’t very many wasted moments. It’s a complete package that is hand tailored to be consumed as intended by the developers, and they’ve delivered a refreshing experience.