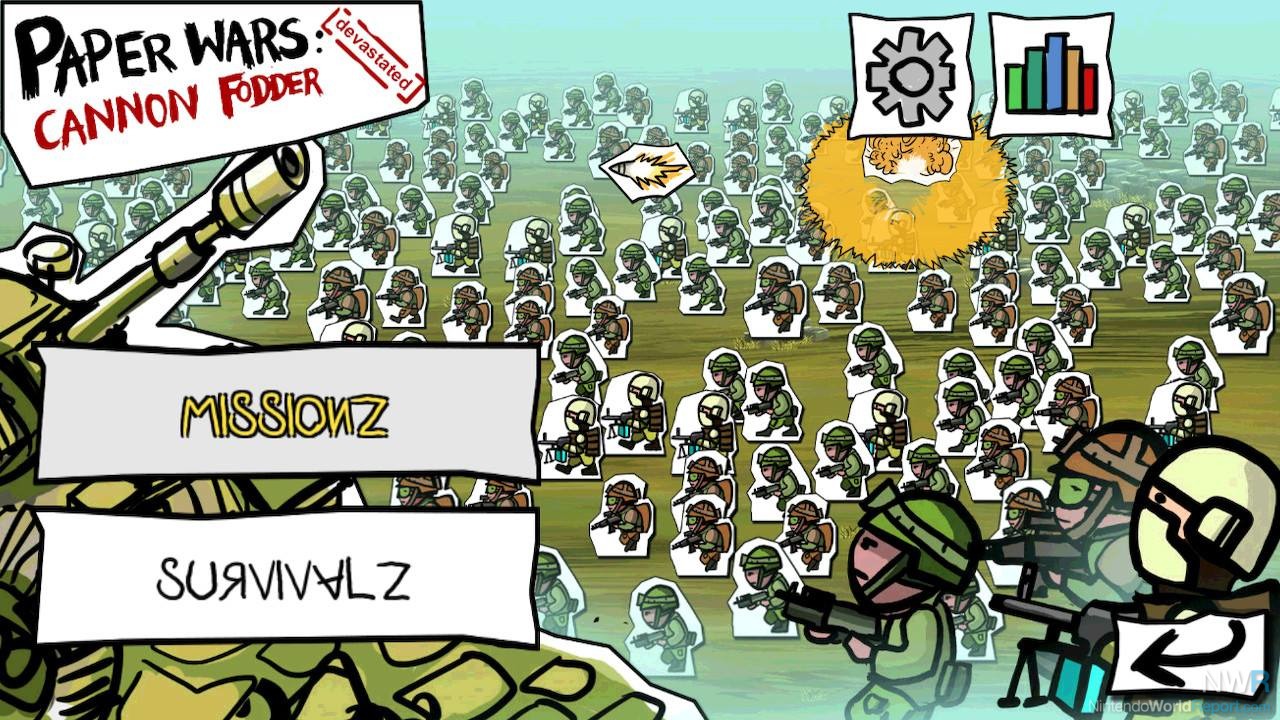 I appreciate it when an indie title tries to find an art style that stands out amongst the crowded spots in the eShop. Whether it be a surrealist polygonal approach, a twist on old-school pixel art, or something like what Paper Wars: Cannon Fodder Devastated (or just Paper Wars) has to offer: vector art with block animation. But outside of that, there is not a great deal of discussion around Paper Wars. The prime focus of the experience is preventing hordes of enemy soldiers from getting from one side of the screen to the other aka a tower defense game. It’s a basic task, that doesn’t complicate outside of faster, stronger enemies crossing the field of battle. Occasionally, the task is changed to holding back the enemy until time runs out, which isn’t too different of an experience. That said, three difficult modes are available, which are your standard “easy, normal, hard” settings. I recommend bypassing both of the lowest forms of difficulty, and going straight into the hardest setting. Both “easy” and “normal” mode were excruciatingly slow for my liking, and so I jumped to what the hardest available levels were. Even those started off fairly slow, but ramped up in difficulty at a great pace. Each difficulty mode has just under 30 levels to play. However, I found each to offer the same experience, even with the limited new enemies that were introduced. That said, the rounds are pretty quick. I was easily able to get through the first four levels in under 15 minutes. This defense game is easily played in either docked or handheld mode, however the touch screen makes for more efficient takedowns in the hardest challenges because the cursor controlled by the controller is fairly slow. 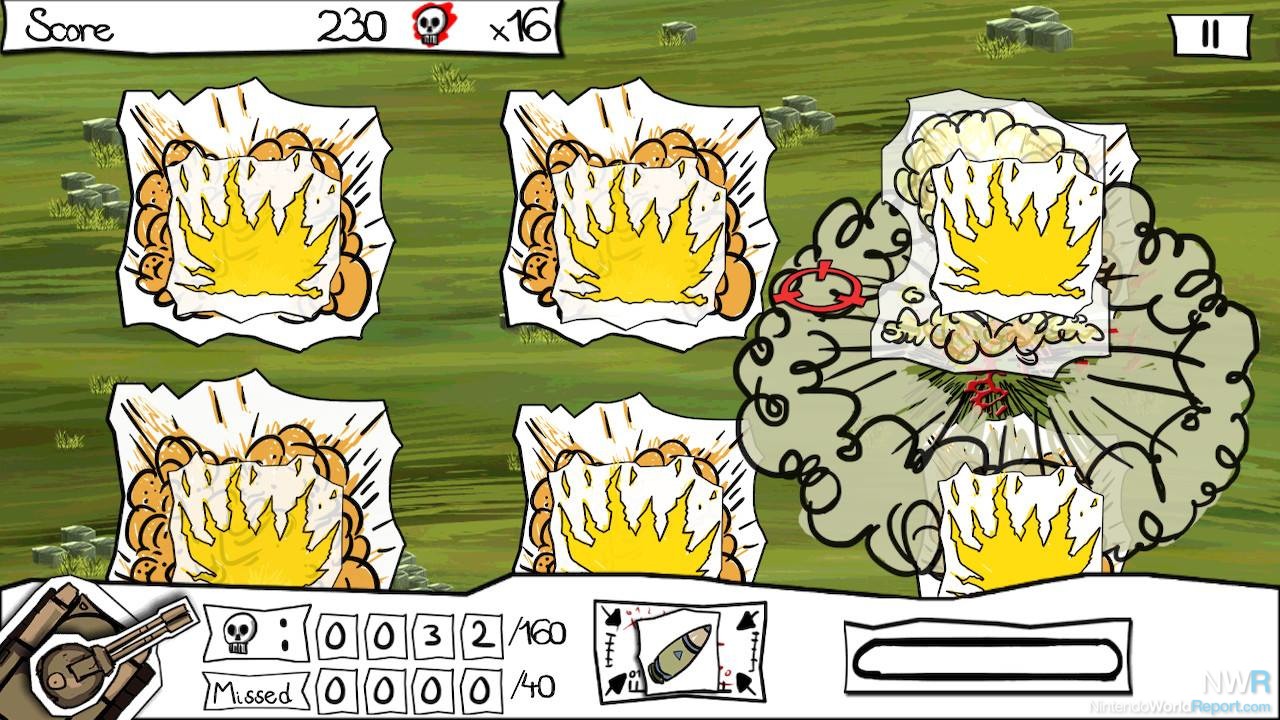 As far as stats go, Paper Wars does a great job tracking everything that you kill, everything you obtain, every medal award, how much time was spent on certain challenges, etc. But, none of this information goes anywhere, because online functionality, and multiplayer is completely absent. This is a devastation to a game that is supposed to be an upgraded version. In their place are the Zombie Wars and Winter Assault modes. These spice up the gameplay a little bit, for example having the soldiers you kill require to be taken down several times because they return from the grave to keep pressing on towards your territory. But the experience is short lived in being different from the Mission and Survival Modes. There are power-ups that spawn randomly in the battlefield, and can often be saving grace when the battle is wearing thin. However, they can be a hazard too, often spawning near large groups of troops that you’re aiming at. And, they can be destroyed by your own tank. I still don’t know what each of the power-ups do, because they weren’t labeled clearly 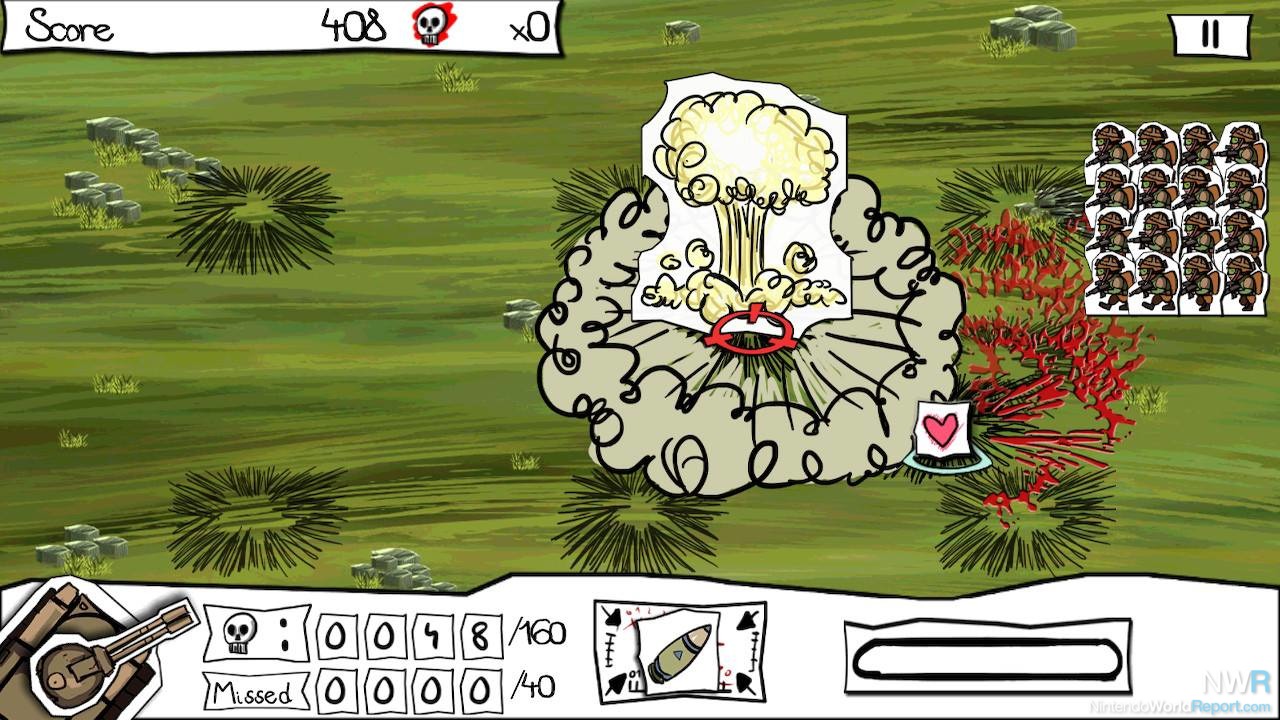 And that leads into what the best part of the game is, the updated artwork assets. In comparison to the original WiiWare title that was published back in 2011, Paper Wars has certainly seen an upgrade in the artwork. However, I still don’t think the effects are that great. The child-like scribbles of explosions, nukes, and missiles all look great in action, but oddly fade away, as if someone just turned down the opacity and called it a day. It’s a fairly archaic design choice that didn’t seem to fit well with what the paper aesthetic was going for. Also, very unrealistic blood is used a graphic after killing enemies, but it’s not cartoony blood that looks like it came from the same artist. It looks more like a stock image that was pasted on. The UI also suffers a bit from poor design. The text is written with backwards, hand-drawn art. This is totally fine, and cute, but could get a little annoying to constantly be searching through. And it’s not very clear what I am selecting because the confirmation constantly changes. Sometimes the text is highlighted faintly yellow, or other times the window is tinted gray.

Honestly, Paper Wars is not a bad game by any means. It’s very calming to play, despite it’s war theme and stressful genre. But I found myself getting through the content very quickly, and enjoying it. I was not immersed by any means; usually playing while listening to something else in the background. Paper Wars certainly does suffer from a lack of originality. That might not be what it is going for though. It’s a cheap, cute, tower defense game, in a fairly crowded genre. It has decent visuals that are appreciated, but outside of that, I say, throw it back in the recycling bin.