Stick it to the Man! Review

I don't want strangers peeing in my brain!

How can I describe my experience playing Stick it to the Man? A few different options come to mind: weird, fun, bizarre, maybe hilarious? Pretty much all of those, and more. I was not entirely sure what to expect going in, and I don’t think I would have ever guessed what my experience would look like coming out. 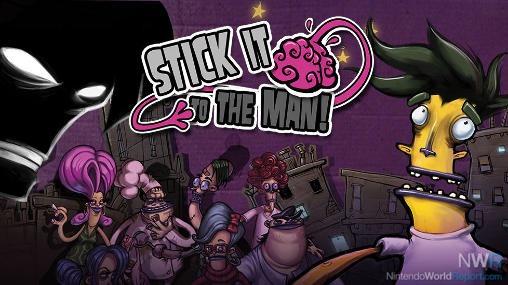 The main protagonist is a funny, little cartoon man, named Ray. Ray works as a construction hard hat tester. So needless to say, he’s probably earnedmore then a few bumps on his head. But he gets his biggest yet when a canister falling from a plane lands on him, and releases some kind of creature into his brain. When he comes to, he finds that he has a giant pink hand growing out of his head, but only he can see it. It isn’t long before Ray realizes he can use his new hand to reach into the minds of those around him, and read their thoughts. And that’s where everything kicks off. There are of course villains after Ray, and a bit of backstory behind the character in Ray’s head, but it’s nothing super deep. It’s a nice, fun and silly adventure.

What I noticed first, before anything else, was the look of this world. The visuals here are so surreal and wacky, I couldn’t help but find myself smiling. The characters are not quite as creepy as say, a Tim Burton work, but they are definitely not the usual NPC encountered in a game. And this heavy stylization is one of the best components of the experience. Most of, if not all of the characters don’t have a mouth that connects their head to their body. It’s just floating there, up and down when they talk. Also, this world while technically 2.5D in perspective, is handcrafted out of paper and cardboard. Thus, begins the comparison to Paper Mario. Both are made of paper-like items, both are very funny, and both are quite visually appealing. I think Stick it to the Man’s visual appeal is more of a grotesque/cool look instead of something clean and cute. Another really fun element is the voice acting. All of the dialogue is voice acted, and quite well. You can really tell that the team had fun giving matching zany voices to the characters, and I never felt overwhelmed. If anything, they added a lot to the immersion. And the writing is really funny. I had a handful of actual laugh-out-loud moments, and even more jaw-dropping moments because I couldn’t believe how weird some of the story was. 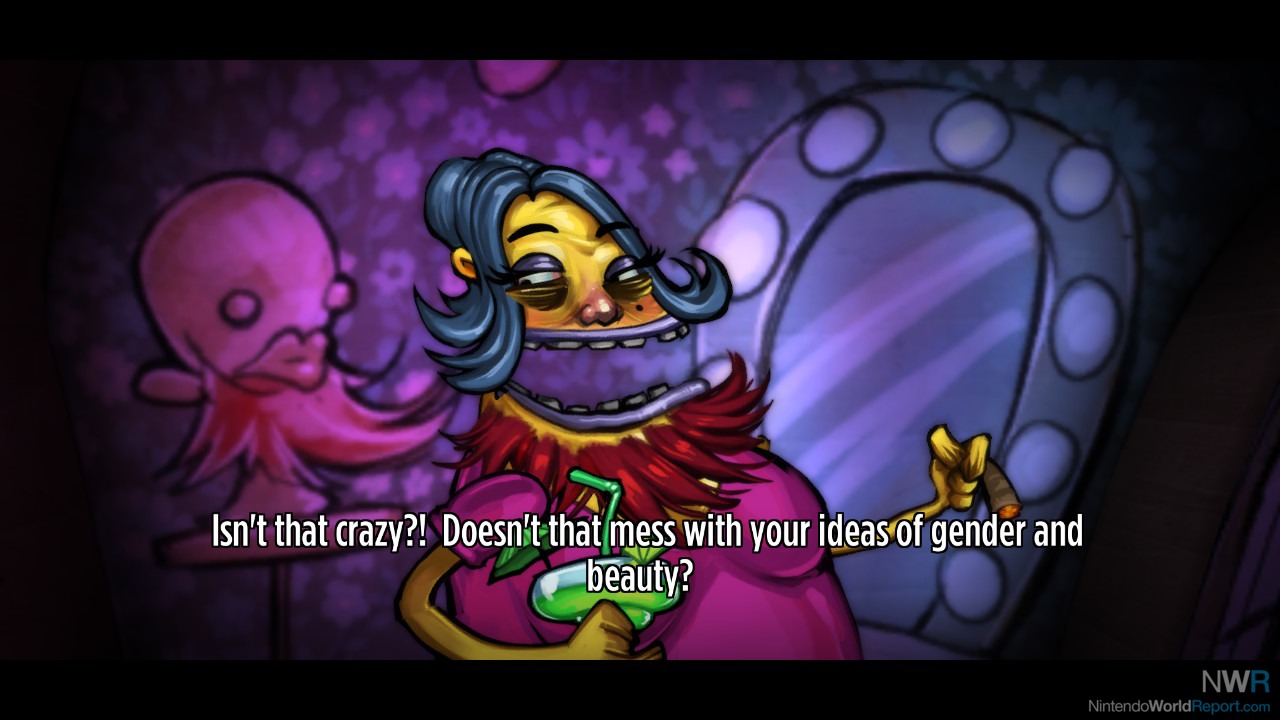 Ray often uses his hand to rip down sides of buildings, revealing their interior, as if the player was looking into a dollhouse. He can also listen in on the thoughts of those around him – and sometimes the NPC’s will create a visual thought bubble with a picture of something in it. Ray can also tear down those thoughts, and use them as stickers to interact with the world around him. See someone who looks tired? Read their mind, and see that they are thinking about trying to stay awake. Some cartoon Z’s will appear that can be ripped down, and then stuck on to NPC’s to put them to sleep. Again, this concept is very similar to Paper Mario Sticker Star’s mechanic of using the items around you to interact with the environment. The biggest difference though, is that Stick it to the Man’s core is designed around solving puzzle-like situations using the stickers. Whereas Paper Mario Sticker Star’s bumble was that a lot of the solutions to puzzles were guess work. Stick it to the Man is fairly clear on what needs to be used to complete a puzzle, it’s a matter of figuring out how to get what you need. One NPC is a ghost who doesn’t have legs and can’t get to the afterlife, while another NPC is a mean bully wrestler with long legs. It’s pretty clear that Ray needs to find a way to help out the ghost, but the puzzle is how he can get the wrestler’s legs to the ghost. There are still a few head scratchers, in the second half of the game, but rarely did I feel cheated. This adventure felt focused on using the mechanic of reading thoughts and using stickers to solve problems. 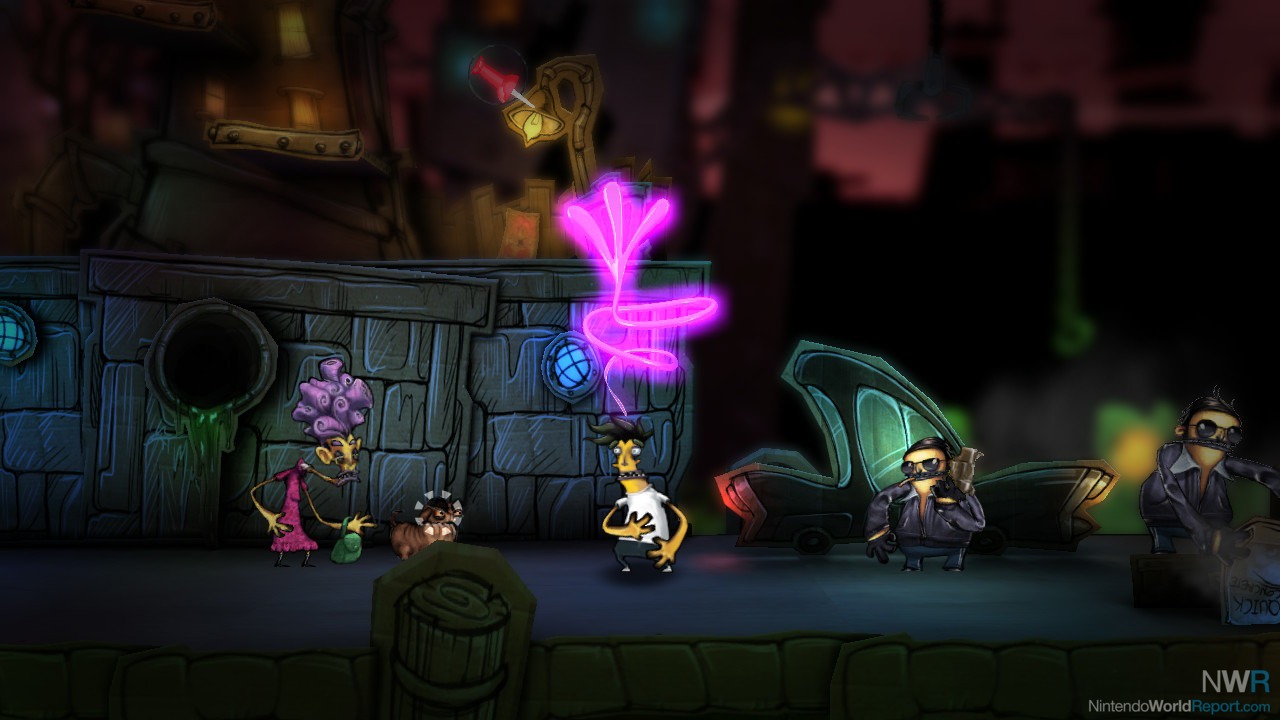 As far as the negatives, there weren’t many moments where I got annoyed. The only experience I had that dampened the overall play through was that in the later half of the game, I had a few buggy moments. There is an auto save, so thankfully I didn’t lose progress. But I soft locked the game once during a sequence where Ray uses his hand to grab a green thumb tack and fly to a far off part of the map. And, also I didn’t understand right away what the icons on the map meant. It’s well designed in terms of layout, but I was unsure of the pink dots and squiggly lines on it for the first few chapters. It didn’t take long to understand that the dots were places I had interacted with, and the squiggly lines were question marks, but it would have been nice to have been told what they were early on.

Lastly, I want to share that the HD Rumble was an unexpected, pleasant surprise while playing. It’s always difficult to describe, but essentially whenever Ray’s hand reaches into an NPC’s mind, the visuals shown are that of the NPC’s brain being read, and a swirly, cartoon-like effect spinning around. It was hypnotic. As the animation is playing, and it plays a lot – every time Ray reads a mind, the Joy-Cons/Pro Controller will simulate a spinning rumble. They use the pitches in the rumble to make a scale of sound that sounds like it is going along with the animation. Very outerspace-y and cool. Admittedly, I don’t know enough tech talk to go in-depth on what is happening, but you will have to trust me on this one. Think that Ball Count game in 1-2-Switch, but instead of rolling around aimlessly, the balls are circling in a perfect smooth circle, while also changing pitch. 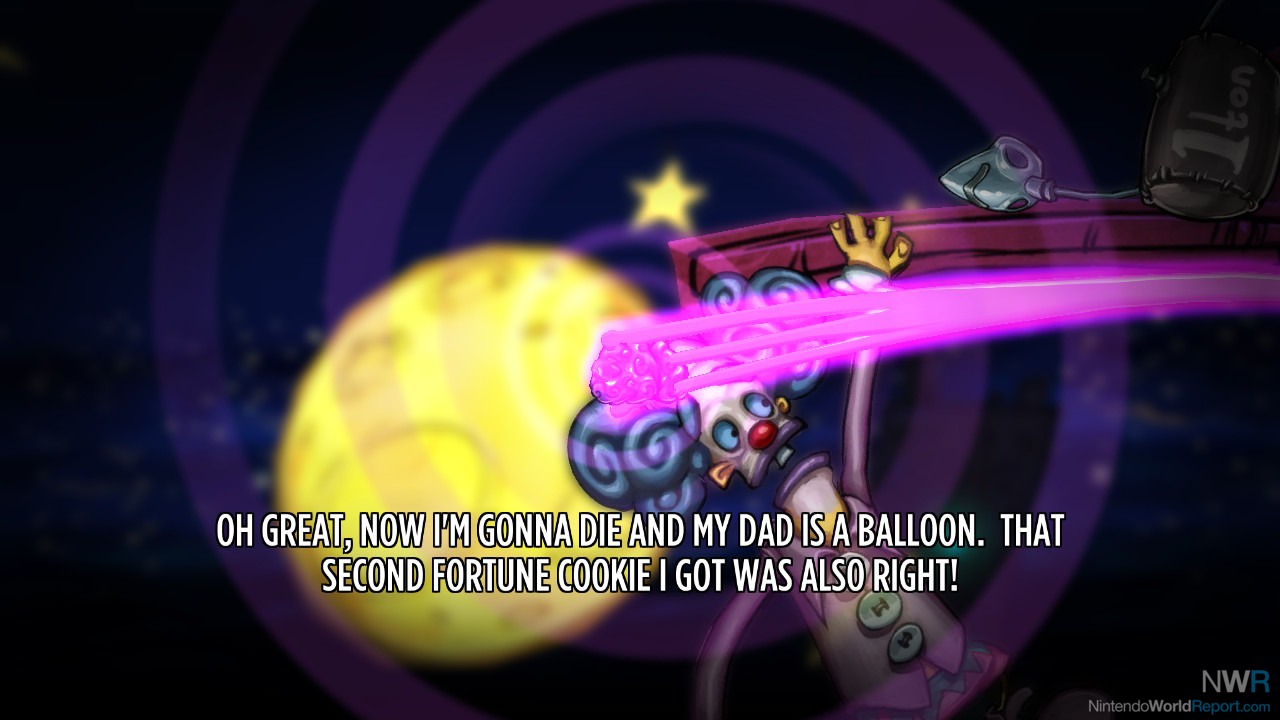 I really recommend playing this game. It’s a quick play, doesn’t overstay its welcome, and is packed with a lot of love and charm. I really enjoyed the writing and voices, as well as the art direction. I’m unsure if the Switch version got this as an exclusive, but there’s a couple of Nintendo jokes to be found early on that started the game off with a great tone. It ran great in both handheld and docked mode. I recommend headphones to hear all of the music, sound effects, and voices as clearly as possible. It’s not a game I’d play on the bus, or in a busy area without headphones because of the great voices. But subtitles are an option as well. If you have a moment to try something new, and fun, give this one a look.